Moderator : feel free to move this to a more appropriate category if necessary…

I will give a brief description of the method I have used to create ice using paraffin. The accompanying photos are from a diorama (yet to be named) that I have recently finished.

As with anything liquid and hot, use extreme caution and common sense when attempting this method

Preparing the base
Whatever diorama base you are using you will need to do a couple things prior to ‘making ice’. The area of the on your diorama base that is to be covered in ice must have a lip of approximately 1/4" (0.6cm) to retain the liquid paraffin. A’ land mass’ or out cropping on the interior side of the diorama is fine but the edges of the base must have a lip. I want to keep the depth of the paraffin to a minimum which is why I suggest 1/4" (0.6cm). 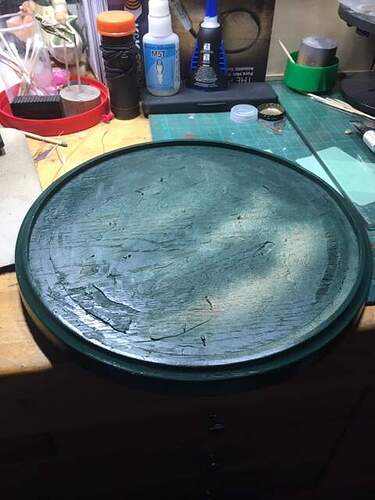 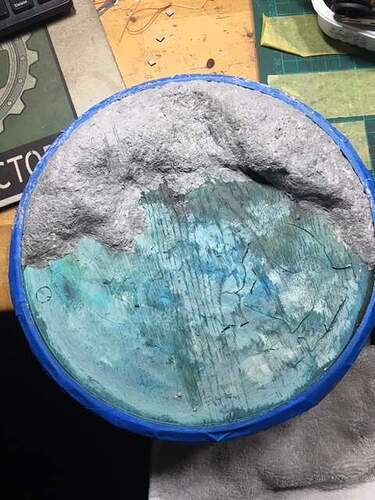 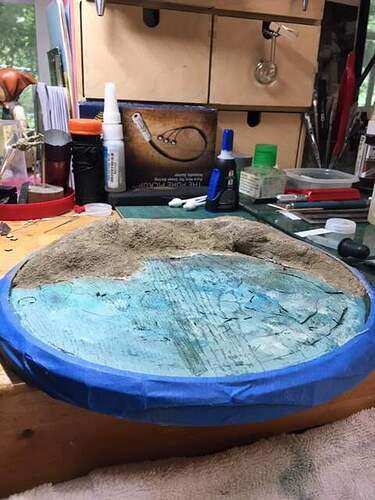 The area that will be covered in ice should be painted with what ever type color you want to be “hinted” through the semi-transparent ice. A mottled green/blue or a light blue (for a real cold effect)is fine. Don’t spent too much time on this as you can just slosh and brush to get the area covered. Let paint thoroughly dry.

If the ‘lip’ of your diorama is not a part of the base as mine is here in the photos (a routed out base) you will need to seal whatever barrier you have so the liquid paraffin doesn’t leak out. This can be done with white glue or silicon (sparingly) spread along any seams. This is important as the liquid paraffin will flow like water and seek out any opening to drain from. It will be quite messy if the paraffin leaks out over your work surface and could potentially ruin your diorama.

At this point I have added some foliage, dusted with white paint (snow) and adjusted where and how the tank will sit in the ice. The tank is securely attached with a screw from inside to the base 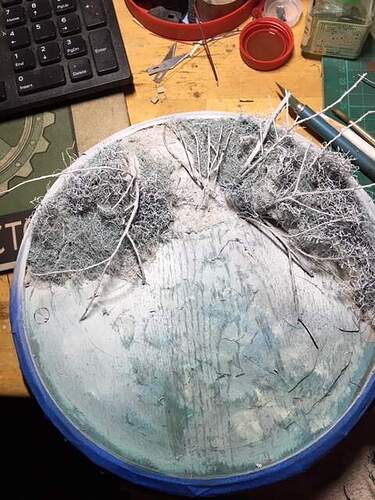 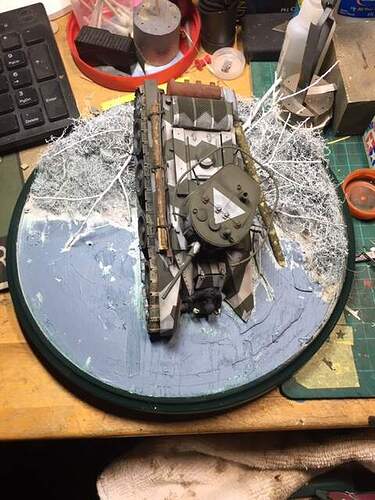 Preparing the 'Ice’
Years ago I went to the craft store and bought a 5 lb. (2.27kgs) block of paraffin, the kind normally used by candle makers. 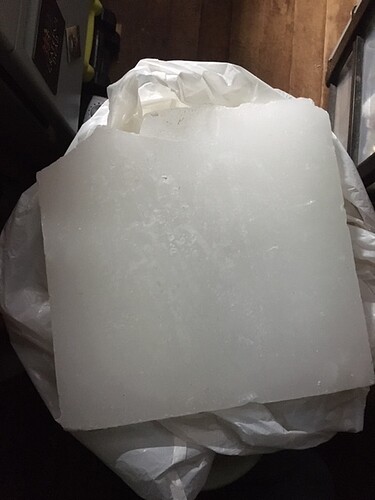 IMG_3241480×640 71.5 KB
I have made 3-4 dioramas with ‘ice’ and still have most of the original block left. Several candles (non-colored) should be fine for a normal sized diorama.
Break up your paraffin into pieces about the size of the end of your thumb (will help to melt faster) and put these into an old pot that you no longer use for cooking. 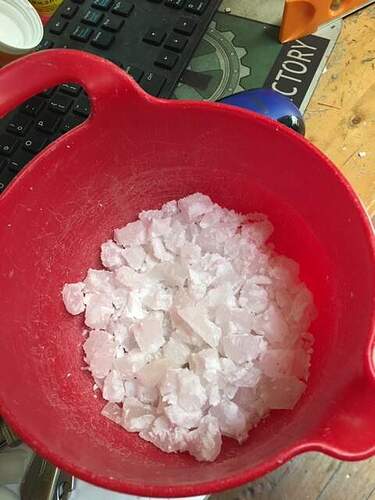 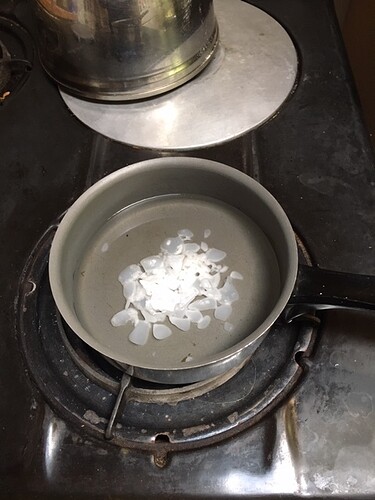 Depending on the area you are filling you need to estimate approximately how much paraffin you will need ( remember, it is only a 1/4" depth so you really don’t need a whole bunch) but you want enough to complete the dio in one pour so a little more is better than not enough. Add small chunks of paraffin to the pot as needed. You want the paraffin hot and liquid… just to the point of where the paraffin is beginning to vaporize.

Making Ice
Spread newspaper on your work area several layers thick to absorb any overflow.
Make sure the diorama base is perfectly level as you are pouring a liquid. 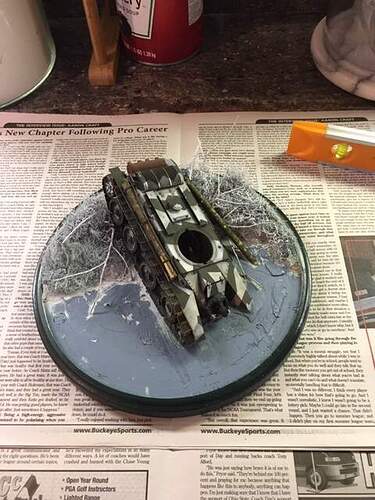 After checking to be sure that all is ready take the pot of liquid paraffin and carefully pour it into the prepared area on your diorama base. Pour enough that it flows level to the top of the lip you have created on the base. It will seek it’s own level against any land mass you have created on the base.
The paraffin remains liquid for a short time but it will take hours to completely harden. Do not move the piece while the paraffin is liquid and could possibly flow or distort. 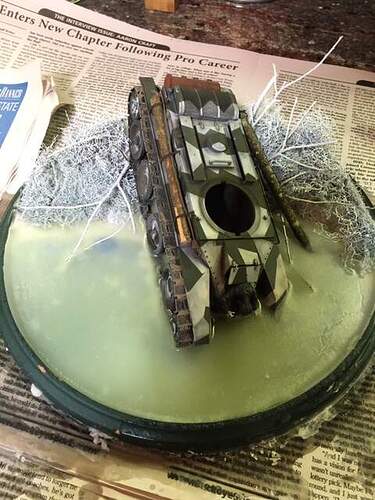 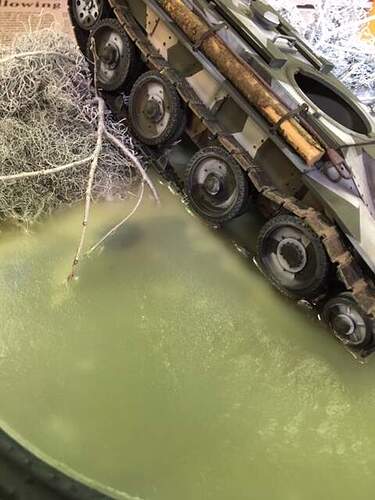 Remember, the top will look hardened but the hot paraffin will remain liquid under the surface for some time. I let the piece sit for at least 30 minutes without moving it and don’t plan on working on it for 6-10 hours. Don’t let the look at this point discourage you, when the paraffin is totally hardened it will look completely different. 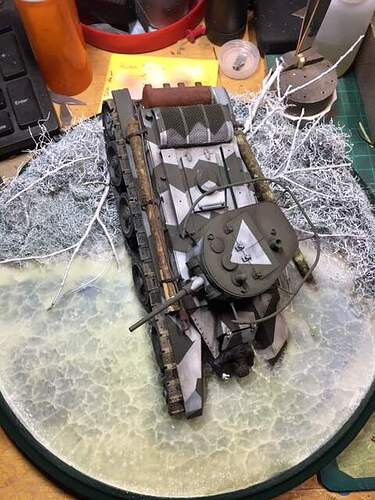 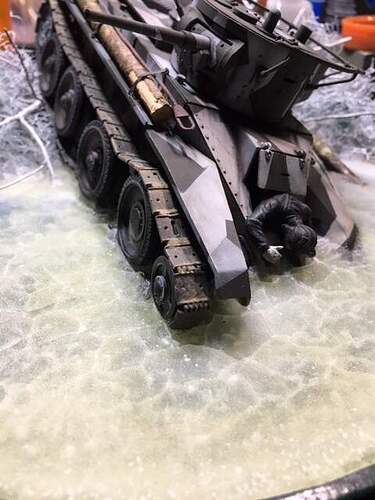 IMG_3267480×640 39.7 KB
You can speed up the hardening time and create interesting surface fractures by putting the entire base into a refrigerator or freezer for several hours. 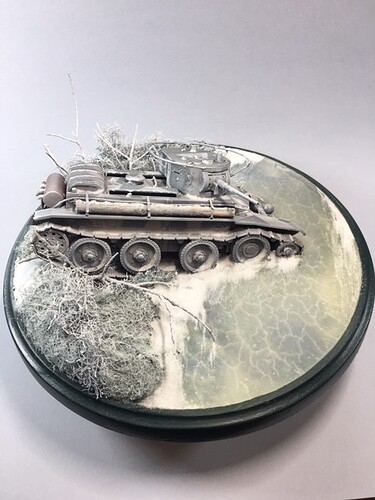 Well, it’s that simple!
I suggest that if you are interested in this method that you start small and possibly do just a quick experimental attempt to get the feel of working with liquid paraffin. You have ample time to work but it is not infinite as once the paraffin leaves the flame it begins to harden. The key is having everything ready prior to the pouring.

And again,
As with anything liquid and hot, use extreme caution and common sense when attempting this method

I hope this is of interest and that you will give it a try.
Cheers,
C.Reading

Others I’ve done with this method- 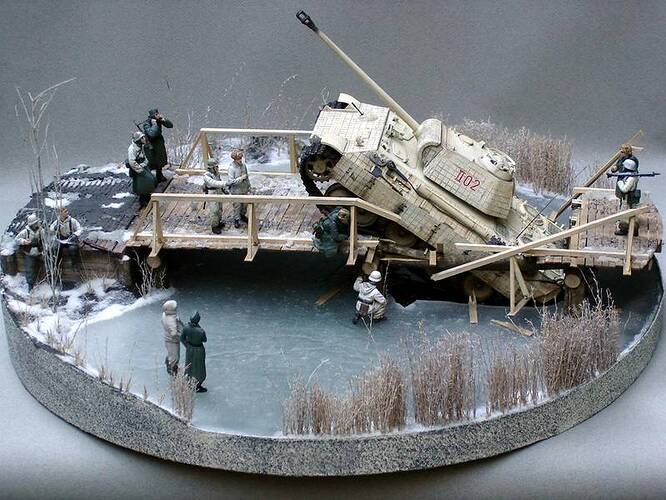 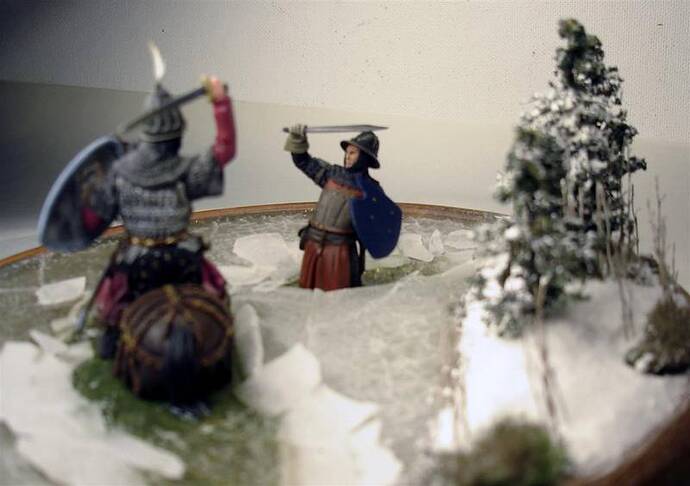 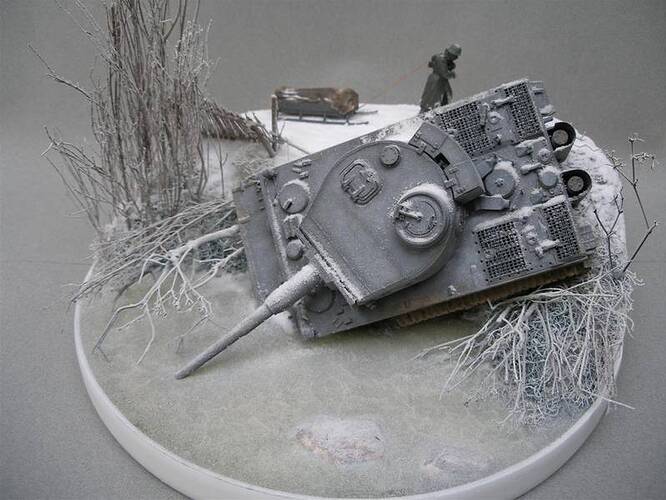 Nice tutorial on you method for making ice.

Thank you for the hint, it is looking very real!

Great tutorial!
My concern is temperature sensitivity of the finished product.

Reason… as a kid I made a couple of candles in camp. Proud Mom displayed them in the living room.
After returning from a week’s holiday one summer (air conditioning shut off) the candles looked like towing hooks.

Never heard of ice being done in that fashion, but I like the idea. Plus it’s relatively safe to work with. The photo of the two guys going at it in the ice water reminds me of George Rodgers Clark’s men breaking ice on their way down to Ft. Vincennes during the U.S. Revolutionary War. That would make one heck of a diorama if you could find the figures. They broke ice for almost a hundred miles. In my book they were tough as nails
gary

At first I was concerned with the potential of the paraffin to melt or distort also. However, when they were new, my dios with “ice” travelled from the Bay Area to Southern California and all over Northern Cal in the trunk of my car for numerous shows. Normally they are stored, boxed in an insulated but non-temperature controlled shed. Temps in the summer here can get into the high 90’s / low 100’s.
I have never had a problem with the paraffin softening or melting. I do make it a point not to leave them in the trunk or sit them in direct sunlight.
The biggest problem I’ve had was a kid at a show running his fingernail over the surface to see if it scratched (it did) but that was easily fixed by quickly exposing the scratch to a lit match.

Fantastic tutorial A++
Looks great is a nice creative change of pace.

How did you do the cracked ice effect we seen in this picture?

Charles , does the crack effect just appear after drying or is it necessary do do the fridge/freezer thing to get the cracks ?

Cool idea. Can you expound a bit more on how you made the broken up pieces of ice seen in the swordsman and rider vignette? Most of the tank vignettes have the look of vehicles which fell into water, which subsequently froze around them.

Outstanding SBS! I’ve seen this on a number of dioramas, but this is about the best tutorial I’ve ever read on how to do it.

Thanks for taking the time and effort to share!

On the ‘Frozen Battleground’ dio, I poured the melted paraffin into the base around a clay mold I made where the horse and the standing figure would be. As the paraffin cooled but before it was hard, I removed the section of clay. At the same time I poured the base I also poured a thin sheet of paraffin on a paper plate. When that hardened I simply broke it up into pieces and fit them onto the sides of the ‘hole’ in the lake.
The water effect was done at the end when everything was in place. I carefully daubed in Liquitex Resin Sand Gel. It dries clear and leaves small chunks of sand which ultimately appears as as a really cold ice chunks-in-water effect. When that dried I let clear Future run into the ’ water’ areas, probably 4-5 coats.
The base (surface under the ice) was painted a muddy green/brown prior to any of the above effects.
Better view of ice & water- 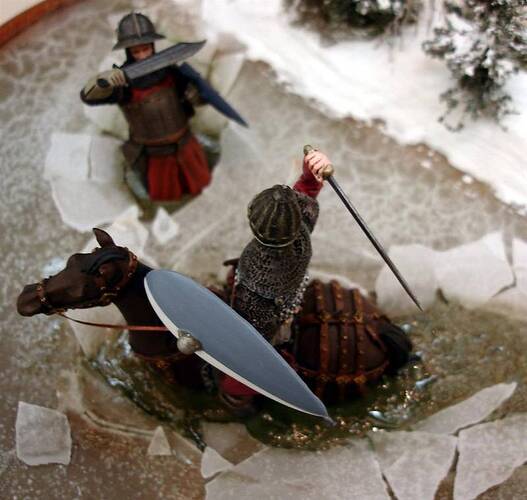 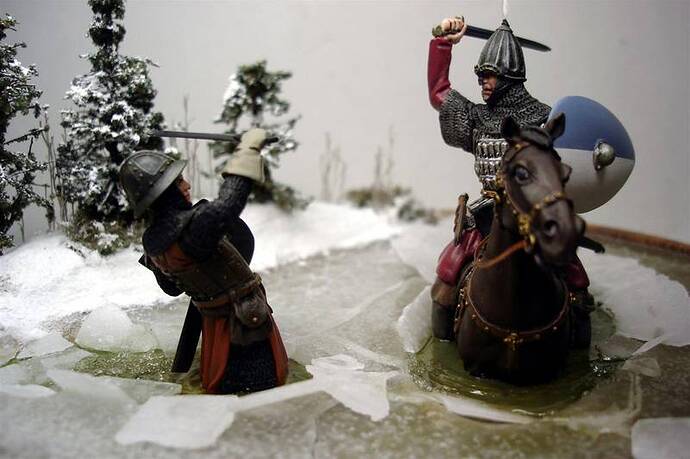 Charles,
Thanks for the great explanations on both techniques…will come in handy for future
projects,
Cheers,

Fascinating tutorial/article.
Coincidentally, I am planning a similar treatment for a diorama showing the USS Seawolf (SSN-21) breaking through the Arctic ice. I managed to purchase a quantity of large white candles, which will
be melted and poured into the recessed base (as you have described). 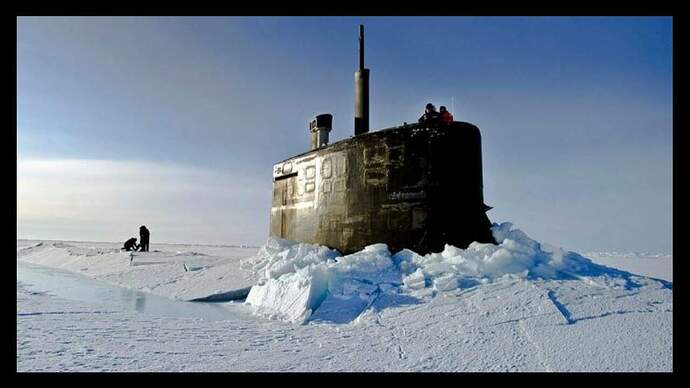 Coincidentally, I am planning a similar treatment for a diorama showing the USS Seawolf (SSN-21) breaking through the Arctic ice.

Coincidentally, that is the same method used by Hollywood special effects people to do subs breaking through the ice in movies like “Ice Station Zebra” and “Firefox.”
Ken