Does anybody know what this gizmo is on the M60 engine? It’s some kind of piping that comes off the exhaust just behind the turbos and goes up to the front of the engine bay; but I have no idea what is for or where it goes! Any help?
Ken 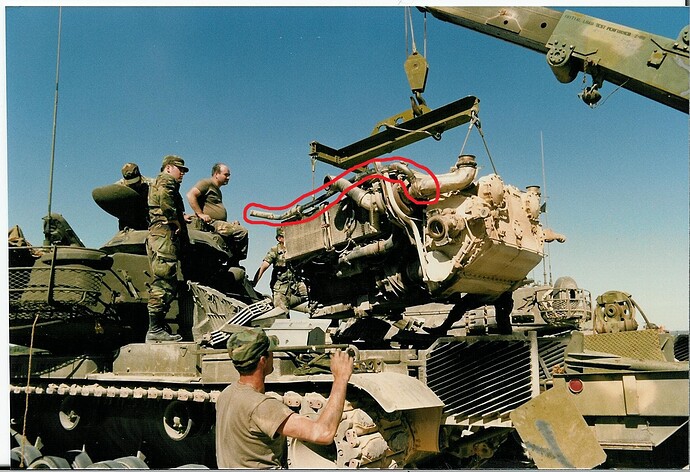 Might be, a connection to the fuel supply.By injecting diesel into the exhaust, a smoke screen could be created.

They do not have one.

@plasticat It’s not an APU, 60s didn’t have them.
@TankCarl It could be for a smoke generator, but it does look a little big for that. There is one on each side. None of my tanks had it, they did not have the smoke generator either, so I don’t know if there is a connection or not. It is on both sides. I have a pretty good stack of manuals for the 60s, but so far I haven’t found it in them.
It’s included in the Verlinden engine set, but they don’t give any information on it.
Ken

been a long, long time since I was around the CD810 transmission (1974 or 75), but it seems that there was a couple coolant connections going and out from it. I last saw one on a dyno and know they had water connections back then. It also might be for an oil cooler. Been a very long time ago
gary

I think Carl is right. It looks like a fuel line joining the exhaust upstream of the turbo.

@Gary_Totty It doesn’t connect to the trans, in fact I can’t figure out where it connects to.

The best idea seems to be fuel lines for a smoke generator, but they look too big for that. The Verlinden engine set has them, the Legends set does not. I cannot find it in any of my manuals. I think I am just going to cut them off and forget about them.
Ken

Apparently the VEESS (Vehicle Engine Exhaust Smoke System) was introduced in the late '70s as part of the M60A1 RISE Passive upgrade program.

@ReluctantRenegade I found a PDF copy of the MWO that covered the VEESS, that is not it. So now I am back at the beginning.
These images, scanned from the Verlinden War Machines No 3, are the best views of what I am looking at. 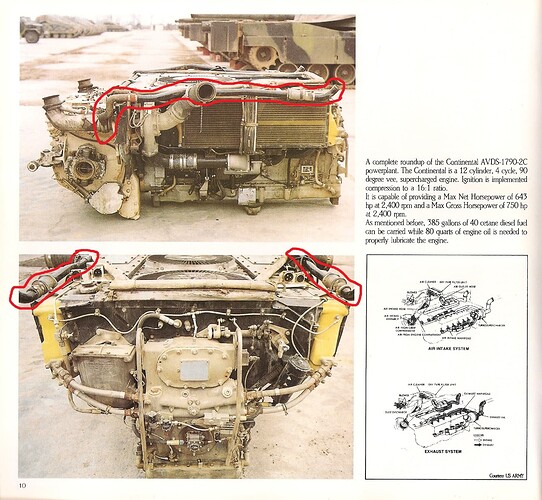 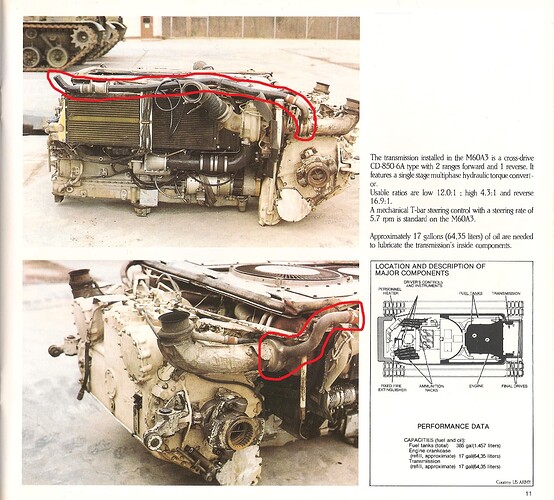 They exit the exhaust pipes downstream of everything. It looks like they may be used to heat or pressurize something, but I have no idea what.
Ken

I have a buddy who worked on these engines back in the day and he thinks it has to do with the smoke generator.

you may be right, as I’ve slept a lot since that Christmas week I had to baby set that dyno. By the way, I think I gave a bum steer on the model number of the gear box. Think it’s a CD850. The place I worked at built them. I know very little about them other than the fact they built thousands of them. At the sametime the (about two weeks later) TACOM came in with a completely new design, and that was the X1100 series. It wouldn’t work, and after three years we took it over and redesigned much of it. Then it went into the Abrams. The replacement for the X1100 is done and just setting on a shelf waiting for the call (always three to five years ahead).

back to the pipe. I wonder if that might be a bearing jacket cooler for the turbos? Looks about the right size, and those bearings get really hot. Otherwise I’m running out of ideas
gary

Those are some great pics from the Verlinden book. I wonder if they are for for blowing air into the exhaust stream to reduce exhaust gas temperature or to burn any residual fuel that made it that far. Just guessing at this point.