I am fairly new to weathering and I am experimenting with some pin washes on bolt heads. I am encountering a problem I am not quite sure how to solve. I put down my paint, then after it had cured did a couple coats of future and let the last one cure for 24 hours. I then went to apply a grey pin wash I mixed myself with white and black artists oils in mineral spirits. The wash behaves as desired wrapping around the bolt head but as I dries it seems to settle out and leave a much larger area around the bolt head than I was expecting.

Is this normal and I am just expected to clean up the excess with a spirits soaked brush or is something amiss here?

Yes, you clean up the excess with a cotton bud dampened with mineral spirits. Just be sure not to remove more than you planned.

What I do is let the pinwash dry for 1-2 hours. Then I take a cotton swab and quickly dab it down directly over the bolt head and at the same time give a little twist You don’t generally have to apply much pressure. I have found that this method usually gets rid of the larger ring and leaves just the ring around the bolt head. Also remember that dirt and grime do collect around the bolt heads and some collect more than others so some slightly larger rings would not be out of order. Good luck.

Okay so what I gather is that a little clean up is pretty common and I should be shooting for perfect pin washes without clean up?

Here is my attempt so far 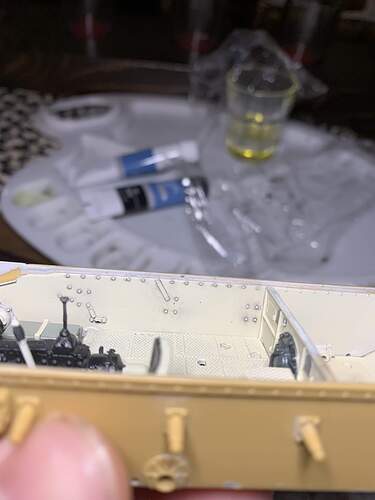 Yes clean up is pretty common. In my experience even using a very fine brush you will have cleanup. Trick of course is to let capillary action work for you but it’s pretty easy to get just a bit too much wash on the tip. From what I see they look good.

Little clean up it’s normal,after slowly you understand how much to load the brush etc,I use Q-tips and brush depending from the occasion

Think I might slowly be getting the hang of it. I think my wash may have been a little too thin too. As some of the thinner has evaporated during my work it seems to be behaving a little bit better

Here is the other side, I think it went better, 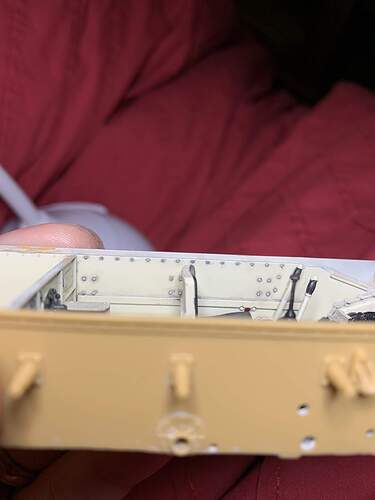 If you pin wash on matt paint, expect it to bleed out. If you pin wash over gloss, it tends to stay where you put it unless you use a lot. Try using only a little at first, you can always go back again if it is too subtle.

You might already be doing this but it sometimes helps to wet the area (a little, don’t saturate it just moisten it) you want to apply the pin-wash to with some clean thinner before actually applying the wash color. This helps draw the color in to the selected areas quickly and can minimize any over-spill.

When learning the pin-wash technique, it might help to understand how and why the tide marks form. 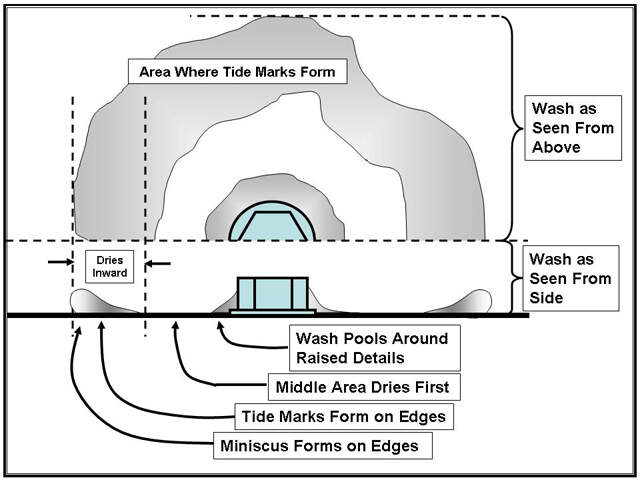 The area between the raised (or sunken) detail and the ring-like meniscus dries from the inside outward towards the meniscus and inward towards the detail. The inward drying is what creates the desired effect around the detail by concentrating the pigments there.

However, the pigments and the binder (trapped in solution with the carrier / thinner) that are pushed outward towards the meniscus are what form the ring-shaped tide mark after the carrier / thinner has evaporated. It’s the pigments and dried binders that create the visible tide marks - pigments give the tide mark color and the dried binders create the shiny ring (like a dried, clear gloss).

The three common remedies mitigate or eliminate the formation of tide marks by:

Overall gloss coat - Enables the drying action to more readily pull the pigments and binders inward towards the raised of sunken detail, thus leaving less material to form the tide mark. The gloss coat has less surface friction to trap and hold the wash solution. A gloss coat also has the (usually) desirable effect of reducing the amount of pigment particles that can become trapped in the general surface area, so the wash will act less like a filter (tinting the entire finish).

Overall wetting with thinners - Helps to prevent the formation of the meniscus by essentially creating a “center” area between all of the raised or sunken details that can only (mostly) dry towards them without the formation of the meniscus, thereby mitigating the tide marks. The pre-wetting with thinners has the same kind effective action on the wash as the overall gloss coat only using the surface tension of the liquid to spread itself over a larger area rather than doing the same by reducing the surface friction. The easy flow of the wash over the surface and filling the surface with clean thinners also helps to lessen the “filter effect” of the wash by giving the pigments less chance of clinging to the surface between the raised or sunken details.

Using a thinner damp brush to clean up the meniscus materials before they dry - This is pretty self-explanatory. However, it is the only 100% effective method to eliminate (not just mitigate) the formation of tide marks. This should be done as quickly as possible after the pin wash has been applied. If allowed to dry too long, the thinner damp brush may not remove the (now) dried tide marks.

This last note is especially important if using any acrylic paint to make the wash. Acrylic paint binders are generally impervious to re-dissolving with thinners after they have dried.

It’s best practice to only make as many pin-washes as you can clean up before the first of them begins to dry, so work in manageable, small areas, completing one area before doing the next.

If this last method (thinner damp brush removal) is used in conjunction with the other two methods it could mean less overall work is necessary. However, even the first two methods will allow some tide marks to form since the carrier / thinner will always dry fastest where it is the thinnest and has the most exposed area (which is the large areas between the raised or sunken details). As soon as this area starts to dry out, the dried edges of it create other areas where meniscuses can form, and if these meniscuses do form, they will have the potential to dry out leaving tide marks.

I know… This is kind of like telling someone who wants to know the time how to build a watch first. However, knowledge is power.

This is great thanks! I did an overall gloss coat, but wasn’t pre wetting. I’ll give this a try! Thanks a bunch. I think they are turning out okay but would like to refine them more. Most of these bolt heads will be hidden anyway being in the interior. However as a fairly new modeler I like to use these interiors as a sandbox to test things like weathering as if I do mess it up it mostly goes away anyway.

Thank you for this explanation.

This twist trick worked well. Cleaned up the rougher edges and also helped to lighten the wash a bit toning it down.

Glad I could help. Been using that technique for years but for the life of me I don’t know/remember how I came about it.

If anyone stumbles on this later I think I’ve finally solved my problem with pin washes and washes in general. I am fairly sure now that my issue was poor paint jobs. They were terrible but they weren’t smooth either.

I recently switched to MR surfacer 1500 thinner with lacquer thinner and switched to lacquer thinner as my thinner of choice and I now have very smooth paint jobs. Previously I think the slight roughness was giving the paint somewhere to flow besides around detail. My first paint job since switching and the washes seem to be hugging detail well!