Hi All
I would like to ask a question on this forum to see if possible if any of the members are aware or can tell me if the German sdkfz 8 db 9 version depicted in the 1/35 scale Trumpeter kit
was ever used in the North African campaign by the Afrika Korps ?
I have seen few pics of the DB 10 version used as artillery tractor but i cannot find any pic of the DB 9 version
can anyone help me?
thanks very much in advance for your reply
stefano

Good question. According to John Milsom’s “German Half-Tracked vehicles of World War 2”, the DB10 entered production in 1939 and was the final version. Only a total of 4000 12 ton half tracks were built, mostly DB10s, so they were comparatively rare and since the Afrika Korps didn’t exist until 1941, I’d say the evidence would seem to be against. I’d say that the DB9s would all have been issued to other units by the time the Afrika Korps was formed. There is a photo in the above book showing one in use on the Russian Front, but since we don’t know what unit it’s from, it could have been an original vehicle issued pre-war. Having said that, someone (Frenchy?) will almost certainly now produce a photo to prove me wrong!

Hi
Thanks very much for your educated reply
your considerations about the vehicles are good but also the Russian campaign begun in 1941
this now is a problem for me to representing this vehicle time period
Would this semi track in the kits only be representative of very early campaign like Poland or France in your opinion?

In a word, no. This is because they would have been “inherited” as it were. Remember the first three Panzer Divisions were formed pre-war, so they could well have taken DB9s into Russia with them, likewise the Light or Panzergrenadier divisions, which were formed from respectively cavalry and infantry units. This is where it may be possible for one to exist in North Africa, as 21st Panzer was originally 5th Leichte (Light) Division. They were not a “first line” combat vehicle, so that they could have lasted well into the war. You can frequently see pictures of pre-war vehicles, such as the Sdkfz 247, or four wheeled armoured cars such as the Sdkfz222 as late as 1942-44. 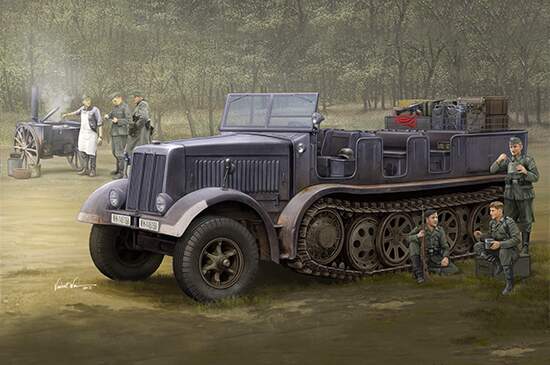 Hello!
Sd.Kfz.8 is used mainly in s.Art.Abt. (heavy artillery battalions). It was also used in the repair divisions of the tank regiments (it replaced the missing Sd.Kfz.9).
In addition, the 5.leicht Afrika Division is formed by parts of the 3.Panzer Division.
If there is a DB9 version in the 3rd Panzer Division in Russia, there are probably some in Africa as well.
Kind regards.
Kalin