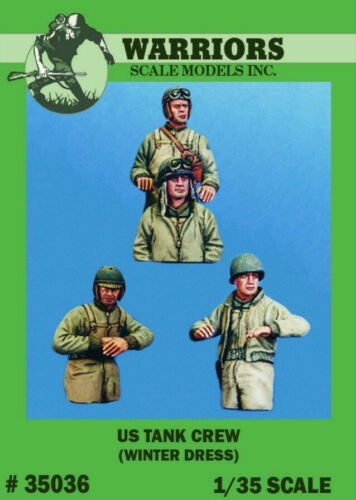 This is partial text from the full article (usually with photos) at https://armorama.com/news/purchase-of-verlinden-productions-warrior-scale-models
1 Like
M109 Vietnam / full interior
golikell April 21, 2022, 1:57pm #2

Hopefully they wil bring out the T-34 interrior soon! I want to model a Border T-34-76 with all the hatches open, but want an interrior for that!

Fantastic news! Been wanting someone to get these lines back into production for a long while. Congrats and best wishes to Greg Cooper!

Where did the news story go?

So, does this mean that all those incredible resin diorama bases from Verlinden, like 'Last Stand" and “Railroad Crossing” may get a second life? I remember VP had so much amazing stuff in the 2002-2010 era but it got snatched up and unfortunately went the way of the Dodo. When these products hit ebay they commanded enormous prices. Sometimes, you’d get lucky and find one at a model show that some vendor had in a pile, but other than that, they’ve disappeared. Hopefully the molds are in good shape and they start getting cranked out again!

I thought the story was that Verlinden couldn’t find a buyer and the molds got thrown into a dumpster a few years ago?

You just made my year.

Yes, the Last Stand and Railroad Crossing are a Warriors item. I am working on helping Greg right now to make molds for new product casting. I will also be selling Warrior Scale Models figures and other items at shows. It’s going to take a while, over 1,000 masters.

Verlinden was purchased by Lots of Models who then lost it due to tax liabilities. The only things he discarded was the production molds, and production masters for the the bases. The original masters were saved.

Don’t get me wrong. I was a big fan of Verlinden in the day. I still have some unbuilt pieces of Verlinden’s, but… times have changed and they are some items that are being done better with the advancements in technology. Their buildings were with soft details and out of plaster. The plaster broke easily. I just threw out 2 buildings because repairing them was not worth the trouble. They have very interesting subjects, if the sharpen the details of the molds for the buildings and made them of ceramic that would be great, Their photo etch was good and the resin figures and items are good, just that scale thing really shows now. 1/32ndish. But I would welcome them back none the less. I would even buy a few sets. It is perhaps the Warriors brand I am most excited about, but that is just me. I wait impatiently for them.

. If I am not mistaken, Warriors actually came out with a WW1 German flamethrower team vignette. Hopefully that gets produced too

The warriors range had some great 120mm figures and he full scale 1.9th figures.Be great to see the German General at Stalingrad again with its iconic ruined building and twisted girders.
Richard

Alll the “old” Verlinden plaster buildings are going to be produced in resin.

Verlinden is more or less a legacy company. I saw their kits scattered here there in the hobby shops (when they were still open), most of their items are definitely not up by today standard. Even if they have the masters items to rebuild, these thing are still quite old and need a big upgrade. Depending on the price, it might get interesting to see how it holds up against 3D printed things.

I have hope for Verlinden’s resurrection…and Warriors too…because with 3-D printing, there are now a lot of spare parts out there to enhance these figures. If one views them as solely OOTB, then yes, I can see the disappointment in some of their kits.

Some of the 120mm figures are off-scale though and need to be corrected, such as the 120mm Vietnam LRRP with goggles and backwards cap. The biceps are huge and the wrist are skinny as a kid’s so the scaling is totally wacky. But if those errors can be corrected with proper replacement parts, then Verlinden can rise again because with ETSY and Shapeways, Verlinden and Warriors figures can make for some excellent kitbashing donor parts. My 120mm Verlinden US “Desert Storm” tanker photo here is a kitbash into a “USMC Future Anti-Drone Gunner”…and super-cheap at $15 for the figure!

Would Verlinden and Warriors be open to selling spare parts? There are some spare parts in some kits that I would like 4-5 copies of. 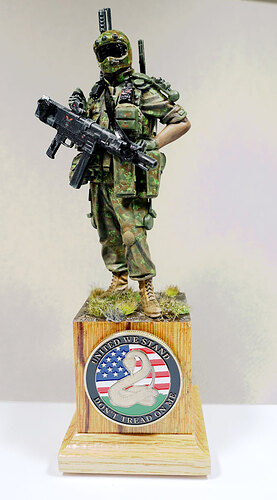 This is great news, Warriors had some excellent WWII figures and Verlinden had the (in my humble opinion) the best US Vietnam tankers, soldiers, and heads, in the market, very cost effective and could be modified for other armies. Greg C. and Bob L. built great dioramas based on those figures. Some 120mm figures were very good too. I hope the new owner brings back those figures, I will buy a bunch of them.

Okay, I’m not a lawyer. What does that mean? Can he start producing and selling them or not?

He probably ought to consult a lawyer before he starts selling/producing.

Think of it this way. If you go to an estate sale and buy an old Mickey Mouse figure. You may own that figure, but that purchase I would highly doubt would allow this person to start producing and selling this Mickey Mouse figure. I would assume the intellectual property owner (Disney) would be getting their lawyers involved.

Exactly.
However, I’ve always found it ironic that Verlinden used to copy plastic kit parts (look at the accordion dust cover in their M48 upgrade for instance) and then complain about people copying their stuff. Of course when they did it they’d cite the 10% rule to legitimize their own copying tactics.
I personally have no use for any of their products. Back in the early 90’s, sure, they had stuff no one else did. But times have changed, most of it was crap then, we just know any better.