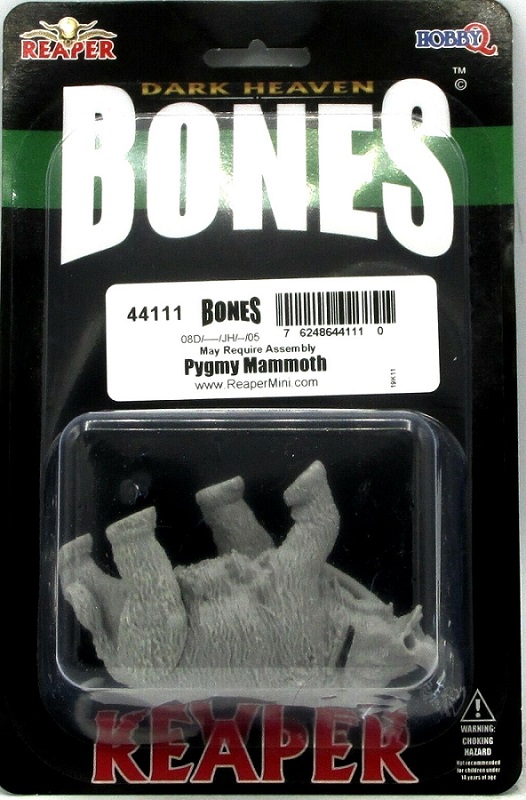 I recently picked up something a little different for a quick build - a Reaper Miniatures Pygmy Mammoth .

I think it may be part of some fantasy wargaming series… but I’m building it for my wife who teaches 4th grade to go along with a fossil mammoth molar and fur sample she shows the kids as part of their science unit. 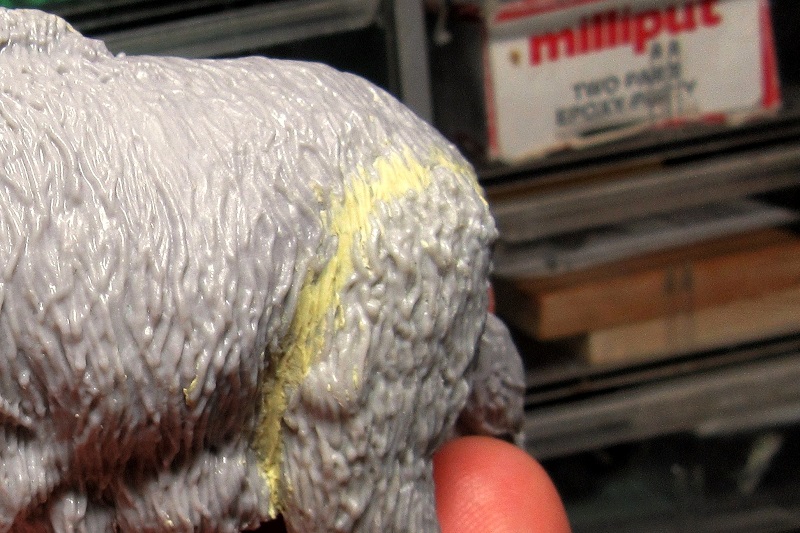 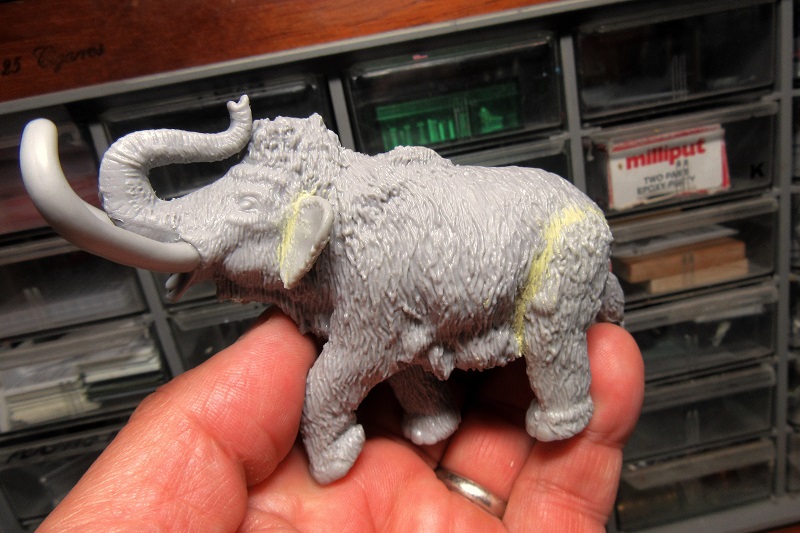 This is a departure from my usual plastic ships, airplanes, and tanks, and the material is a little different, too – some sort of slightly flexible polymer plastic. It comes partly assembled and is beautifully sculpted and well cast. Mold seams were fairly light and scraped away easily, and I attached the tusks and ears with cyanoacrylate. After blending the part joins with Milliput Standard Yellow-Grey two part epoxy putty, I have an assembled mammoth!

I think it may be part of some fantasy wargaming series

Not wargaming in the sense of large armies with serried ranks of similar figures, but Role Playing Games (e.g. “Dungeons and Dragons”) which require a plethora of individual characters, or at best a small group of similar figures with individually low combat values who need strength in numbers to be useful (although there are systems which allow one to combine one’s “Character” figures into element-based small armies: “Hordes of the Things” is my favourite). Hence the myriad of designs and small numbers of figures in each package.
You may find this information useful with regard to (not) priming the “Bones” Material:

I put together a few documents related to using Bones. I've submitted these to the Craft section of the website, but as it may be a little while before Reaper has the time available to add them, Bryan suggested that I post them here. Bones -...

it looks to be an interesting subject, good luck with it.

Tom, thanks for that! I guess I won’t bother to prime the figure when the time comes… 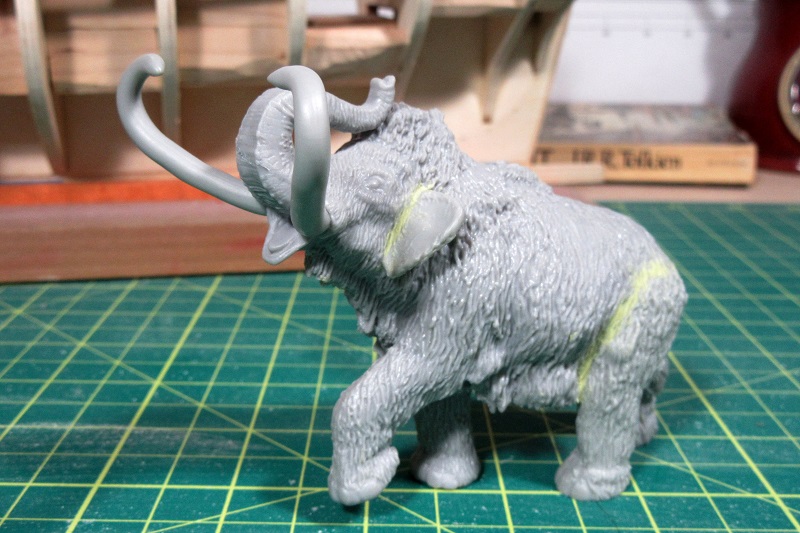 The little mammoth looks cool with his dynamic head-high and three feet on the ground pose, but also makes the free-standing piece a little unstable. Attaching it to a base will help this. 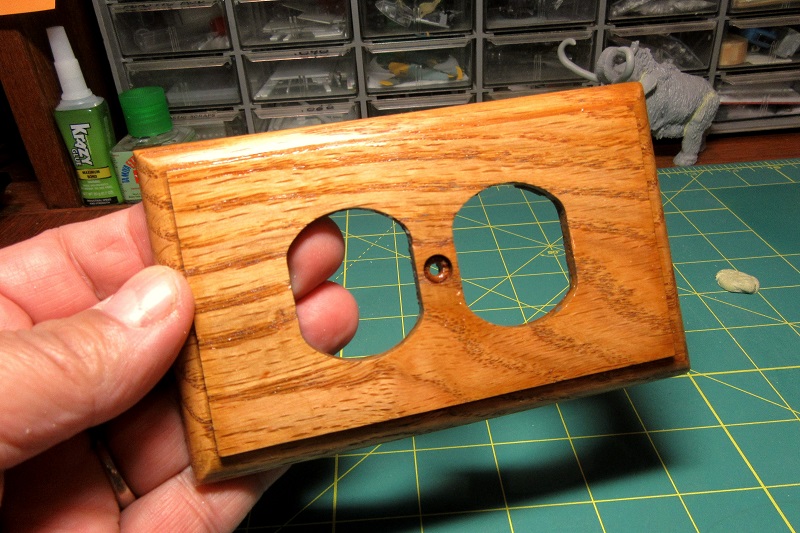 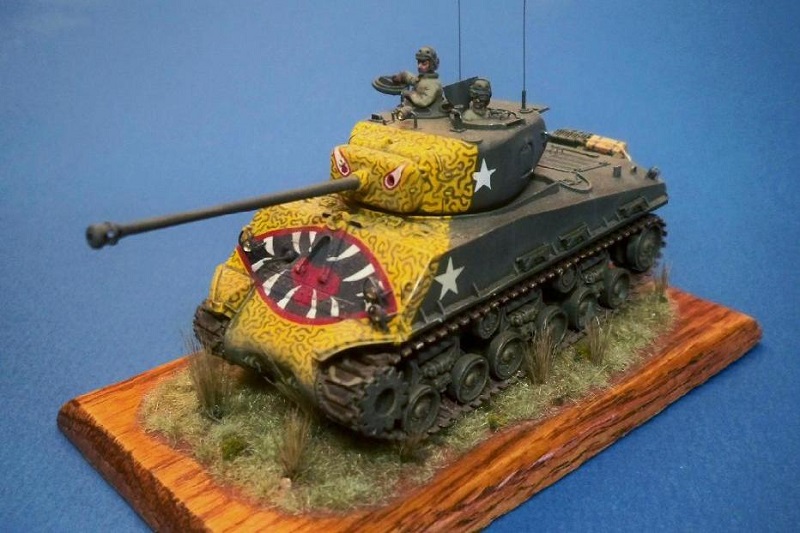 I’ve used these before – they look good and make for quick, easy wood bases! 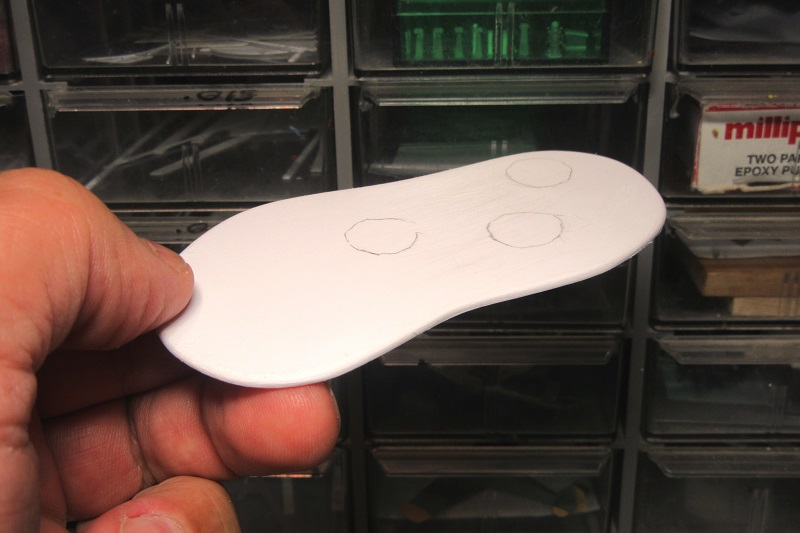 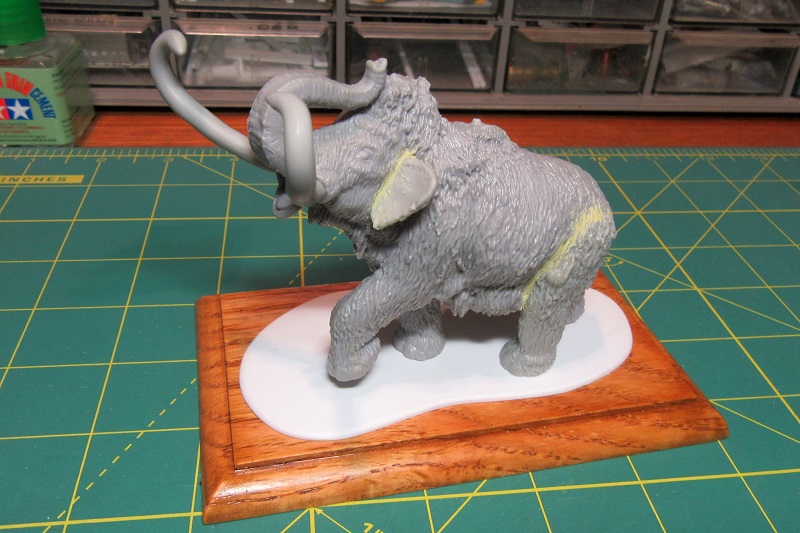 To keep the mammoth from stepping through the plug holes, a simple “Earth” platform was trimmed from a piece of .060 inch plastic sheet. I penciled in the positions of the mammoth’s feet and rounded down the edges.

To keep the mammoth from stepping through the plug holes

You could have trimmed the plug holes and made a large tar pit that the mammoth fell into and made the plastic he became now.

Looks great, wish my teacher would have done something cool like that.

Nice. Fantasy miniatures are often a fun diversion from 1/35 sand and olive drab colored vehicles. They can get your color eyes “reset.”

Thanks for sharing your build Tim. Great info and ideas! 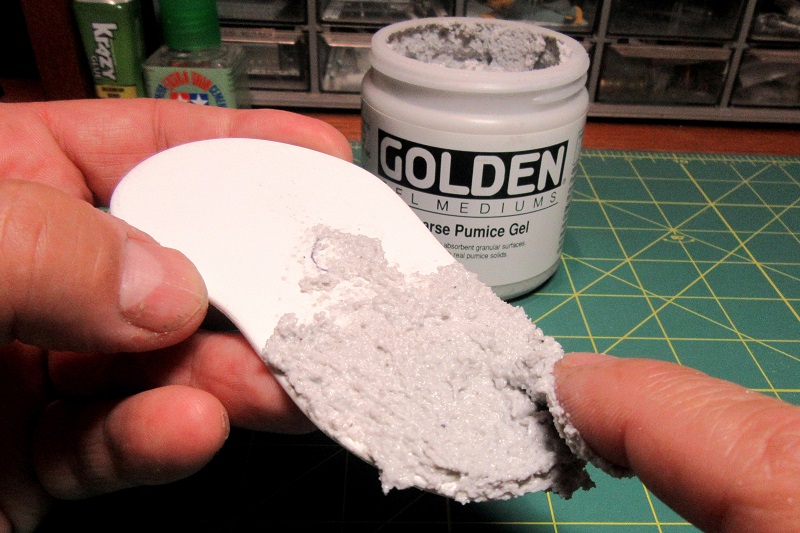 I applied a coating of Golden Gel Mediums Coarse Pumice Gel to give the smooth plastic base some earth texture. 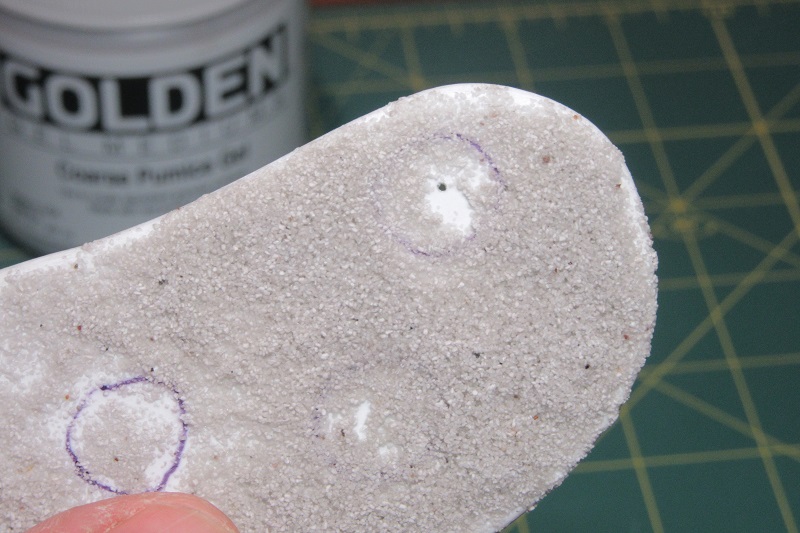 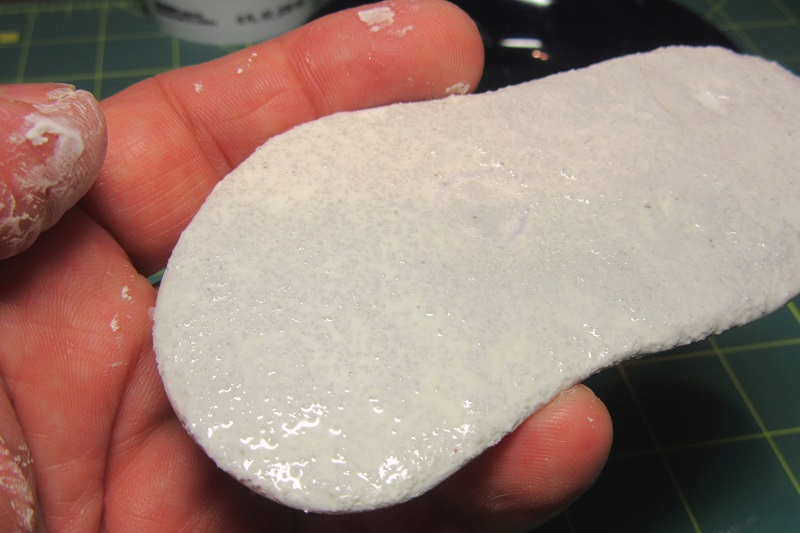 Unfortunately, the groundwork ended up looking more like coarse beach sand than earth, so after it dried I added a slurry of spackling paste thinned with water over the top of it to de-emphasize the overlarge sand grains in the pumice gel. 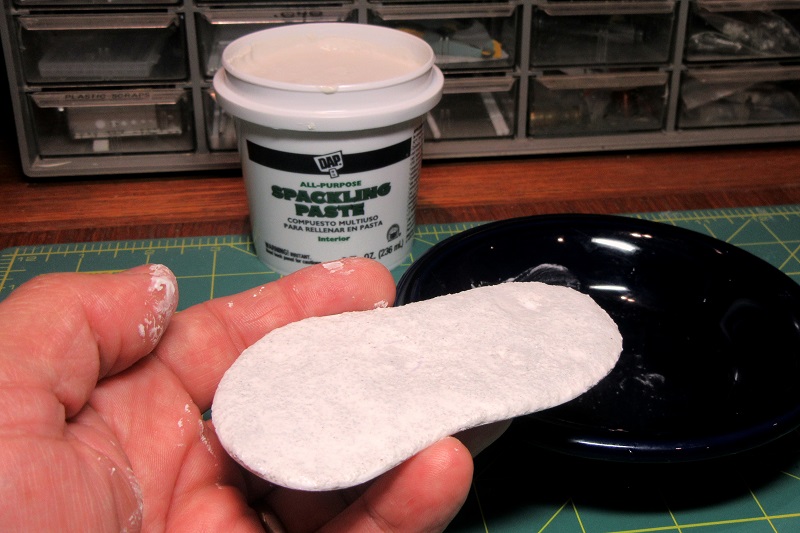 After it fully dries I’ll paint it and add some baking soda to create a snowy scene. 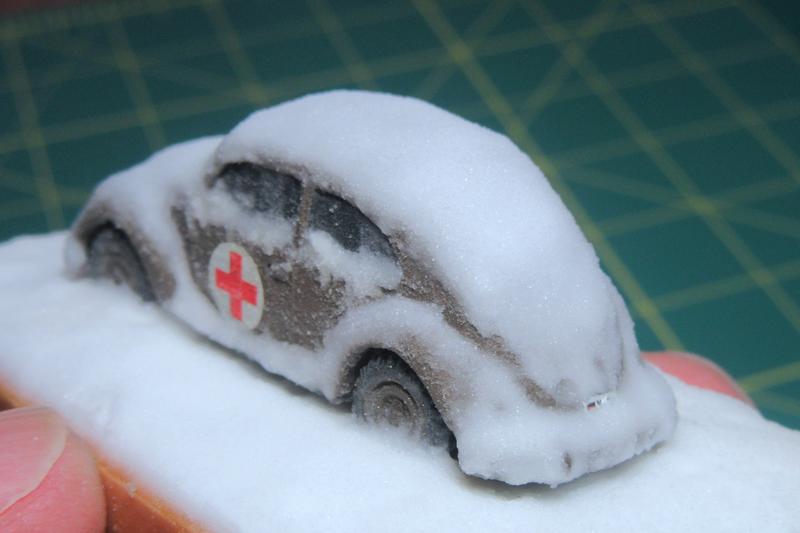 I’ve had good luck with baking soda “snow” before, so a winter mammoth is a natural! 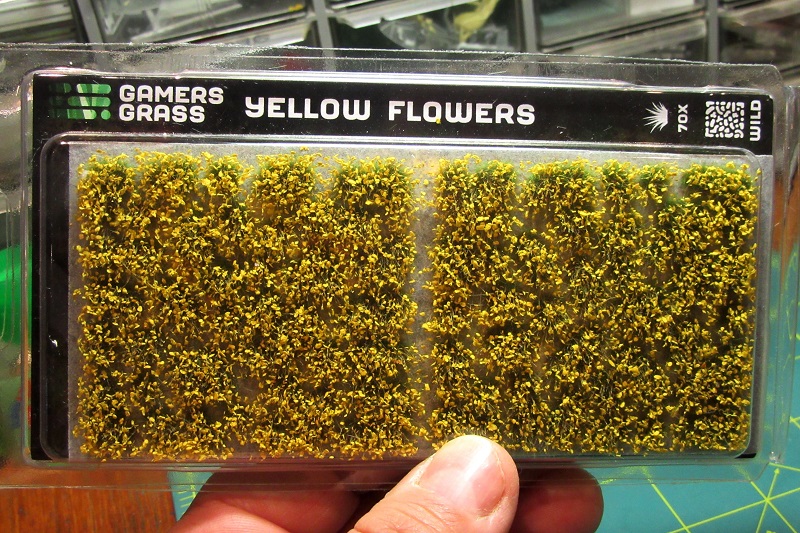 Before proceeding with the snow I came across Gamers Grass Yellow Flowers in the local hobby shop and thought a “Spring” effect might be fun instead. 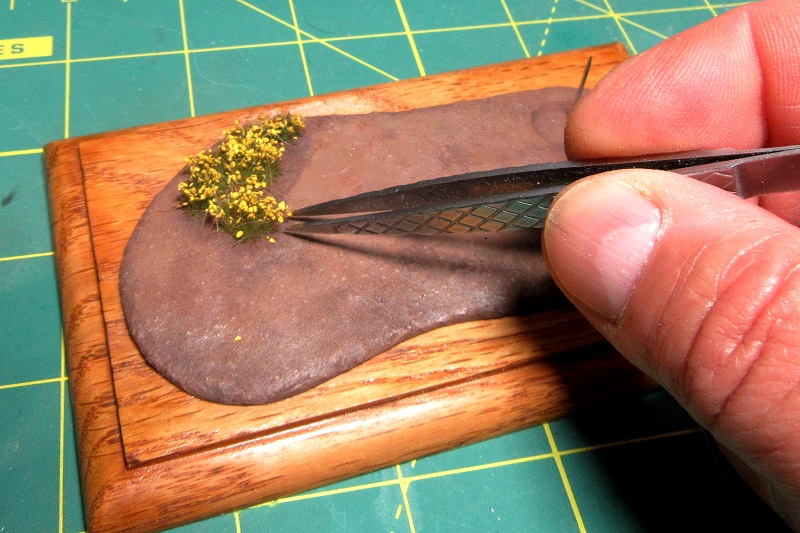 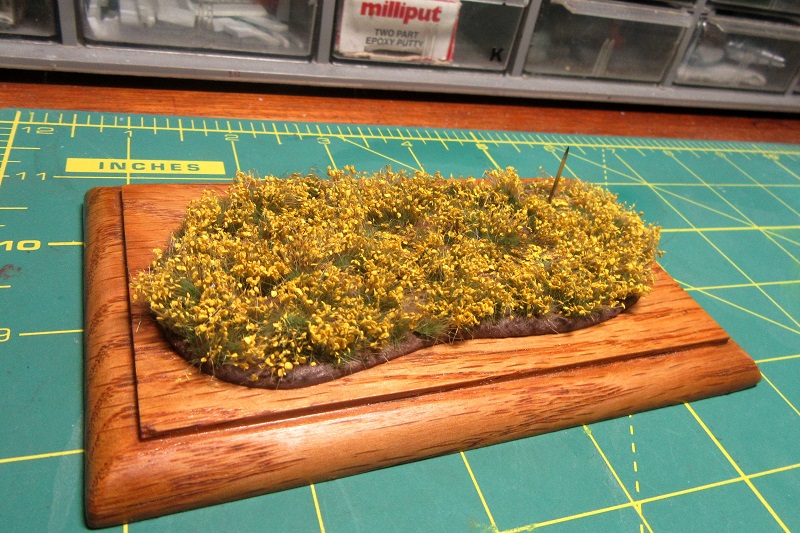 The flowers were attached to the base over a coat of Tamiya XF-52 Flat Earth acrylic.

Keeps getting better and better.

Keeps getting better and better. 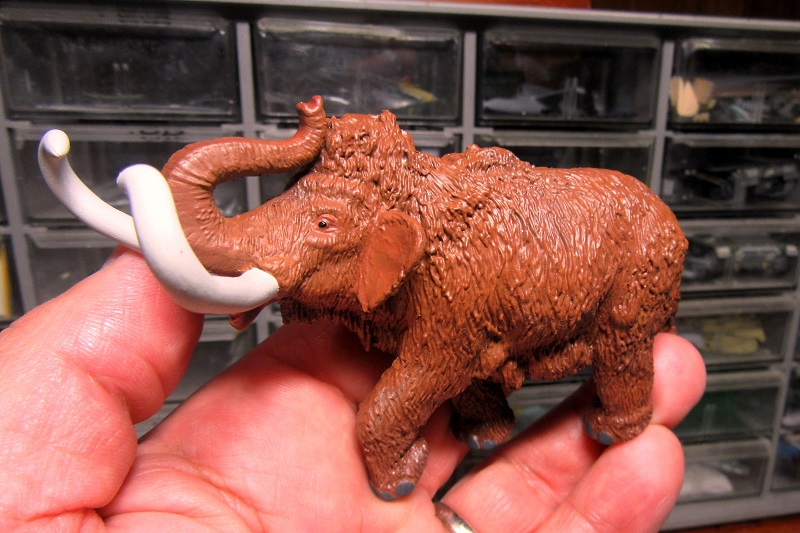 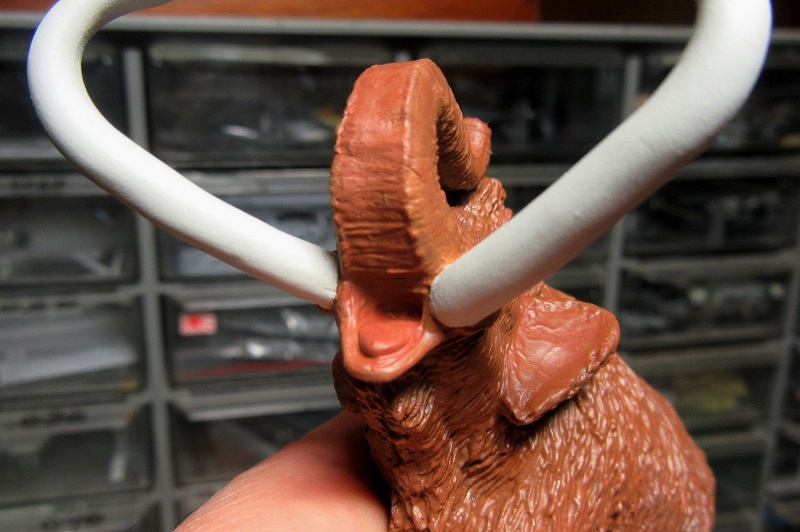 The mouth, eyes, and areas of skin such as the ears and underside of the trunk were painted with the base color with a little more red added. 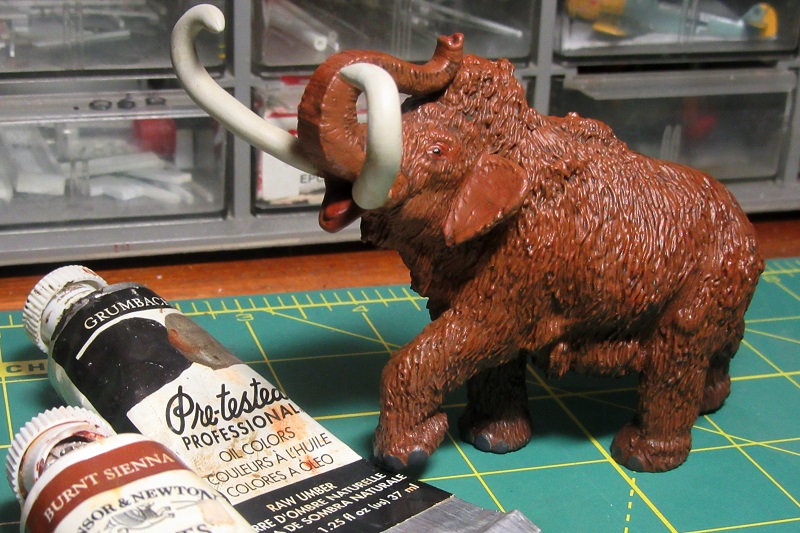 After painting the grey toes and black eyeballs, the mammoth was given a thin wash with Grumbacher Raw Umber and Windsor and Newton Burnt Sienna artist’s oils to deepen recesses and give the beast a slightly red-brown filter. Once this dried, a light drybrushing with the base color with a little more Deck Tan added was applied to integrate things and to provide some highlights. 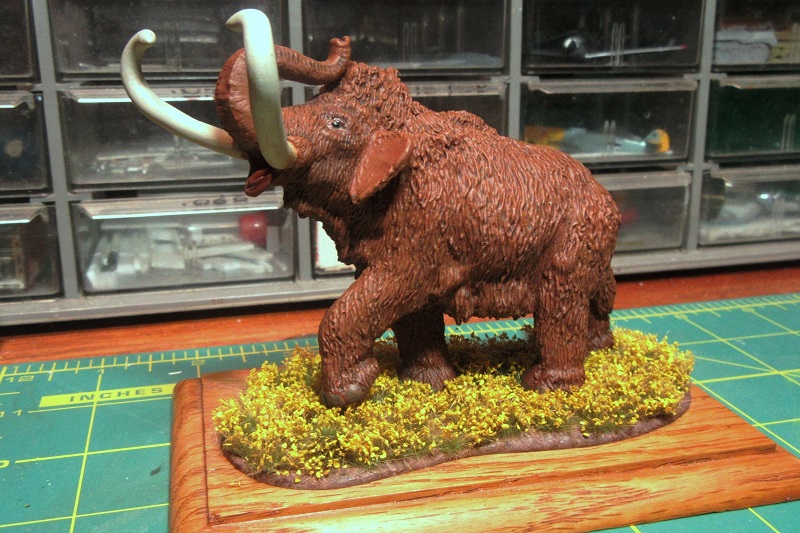 An overall coat of Tamiya Flat Clear TS-80 rattle-can spray knocked down the shine, and dabs of Future acrylic gloss were added to make the mouth look wet and give the eyes sparkle. 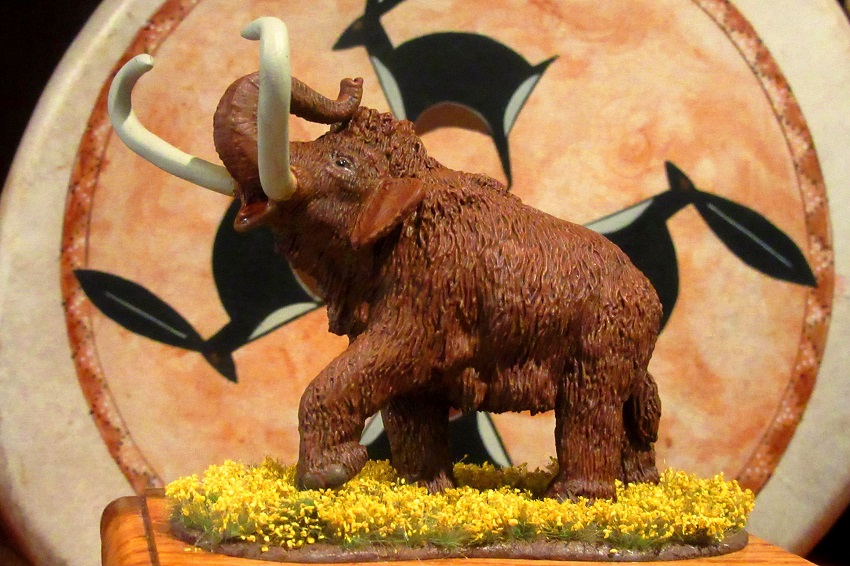 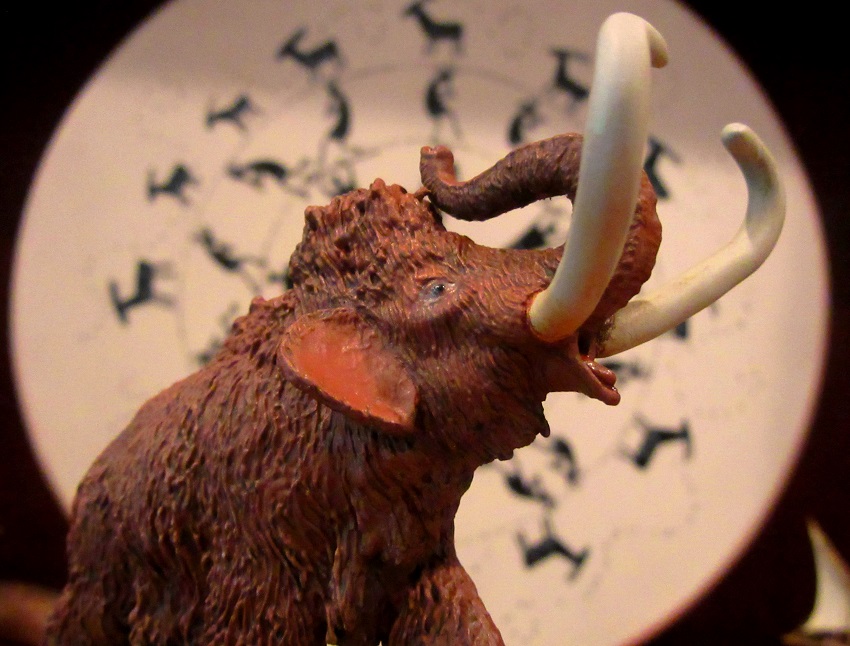 Mounted to the base, Reaper Miniatures’ Pygmy Mammoth prepares to wow the 4th Graders of Dry Creek Elementary School as he stomps his way through Spring wildflowers!

Looks great. Makes me want to go back to class.

Where are Sid and Diego?

Where are Sid and Diego?

Well… sloths (including giant ground sloths - how cool is that?) did live in California during the Pleistocene Era, and the saber-toothed tiger is the official California State Fossil… so who knows, the wife may have further projects for me!

Something a little different and a little unusual. Great to see! Your mammoth came out wonderfully.

Something a little different and a little unusual. Great to see! Your mammoth came out wonderfully.

Rory and Peter, thank you both! This was a fun, quick project, and the wife was suitably pleased with it. The little mammoth will be a minor prop (teaching aid?) in her science unit when she resumes teaching in the Fall.

It is rather small, though - it will be dwarfed by the fossil mammoth molar she has to display with it.