I am fancy to finally build a modern tank once again. I do have an Abrams M1A2SEPV2. Therefore I do have two questions to the educated audience:

Thanks for your help

Hi Thomas,
the “V2” was seen in three colors. NATOflage, Sand and Sand overpainted with Bronzegrün. I ´ve seen pics of a track with attached TUSK in sand. But these were taken on an airshow. IIRC Gino one said that the “V2” was never deployed in Iraq nor Afghanistan.

HermannB is correct, the V2 is too new for TUSK to have been used. TUSK was/is only added for combat and they were too late for Iraq and not deployed to A’stan.

NATO camo M1A2 SEP v2s are at least in Korea, but may be in a couple other units too by now. The tanks in Korea were originally sand camo and repainted NATO camo there. You can still see the sand on the underside of hatches and around the sight doors, etc. 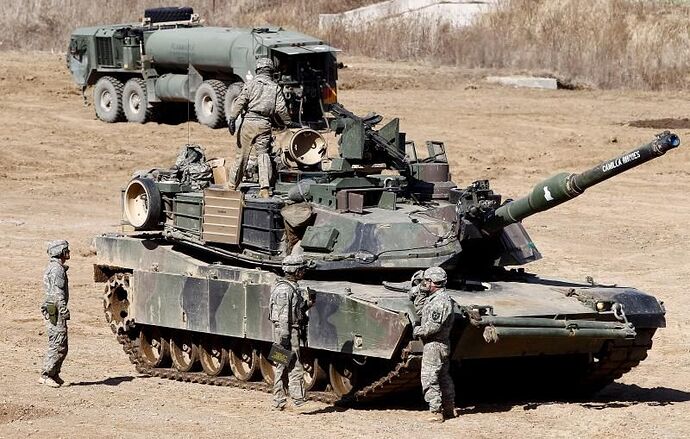 thank you both for your input. So even if there are no pictures of it, it would be possible to see a NATO camoed M1A2SEPV2 with TUSKII uparmored in training/combat situations. Think I got my next project

Is that TUSK II system always sand colored or also in forest green? Questions over questions…

It is possible, but I have not seen any that have rolled out of the warehouse with TUSK on. The TUSK gives no added training value. The training value is knowing how to install and uninstall them.

Since the TUSK ERA is only used in combat, it makes sense to paint it sand only. Otherwise it would be a puzzle to get the blocks matching the colors of the camo pattern.
Bin auch aus Franken, bei Coburg. Wo wohnst Du denn?

Ok then I will make a hypothetical M1A2SEPV2 with TUSK II at a hypothetical present european crisis diorama. Thank you Gino and Hermann again for your help.