Can anyone confirm which Range Safety Vehicles would have been used at BATUS during the late 70s - early 80s? My initial thought was Series 3 Land Rovers, but maybe someone can clarify that. 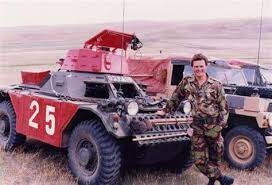 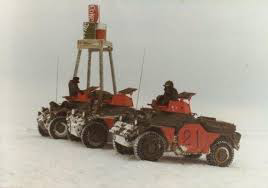 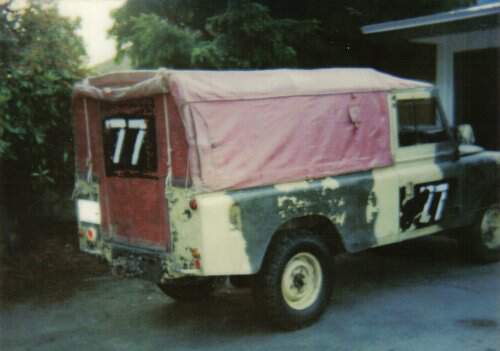 Hope these help for reference

Thanks, exactly what I thought. I also recall seeing photos of Land Rover Lightweights in this role … or maybe these were earlier.
Another point … how feasible would it be to drape scrim net over a model of a Chieftain Mk.5 at BATUS. I have used this on modern AFVs that are on exercise in Europe, but I wonder how appropriate it would be in a Canadian prairie setting.

I was writing my last reply when you sent the images … and yes, there is a Lightweight parked next to the Ferret in the first photo.

Cam nets are still used even on the prairie. BATUS is a live fire exercise so it’s all best practice and you do everything out there that you would do in real life.
Cams net over there are just the sandy/brown version usually though.

Thanks for your really helpful response. 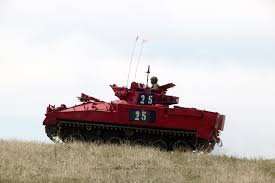 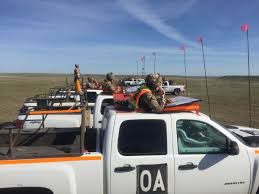 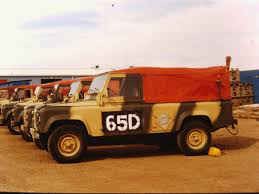 Thanks for the ‘Range Safety Vehicle’ photos.
You mentioned earlier that vehicles at BATUS are sometimes draped with camo nets.
Yes, I have the Tankograd ‘BATUS’ book, and this confirms what you say. However, I
have yet to find photos of BATUS Chieftains with camo nets attached. Of course, you
know better than me, as you probably have first-hand experience (I am just a simple
modeller!) So would it be appropriate to drape scrim net over the hull and turret (but
leaving periscopes and moving parts clear), and around the main gun barrel? 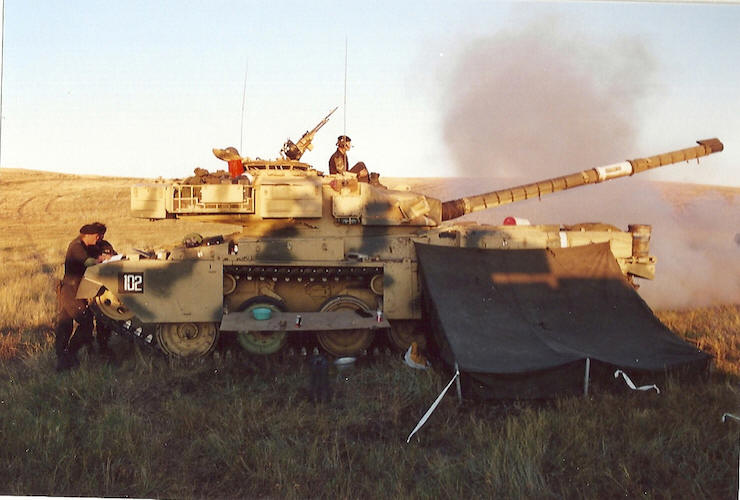 I’ve never seen a BATUS Chieftain with nets draped on the turret or hull. There is no realistic need as there are no trees or scrub on the training area. The nets are typically rolled and stowed on the front of the vehicle round the drivers compartment when not in use as you can see in one of the pics below. The other is stowed on the blade of the Sqn 2ic’s wagon. Apologies for the low quality but they are lifted off the net. As you can see on the pic of the net put up it is quite literally a net with no scrim panels attached, again no need to try and simulate vegetation that isn’t on the prairie. 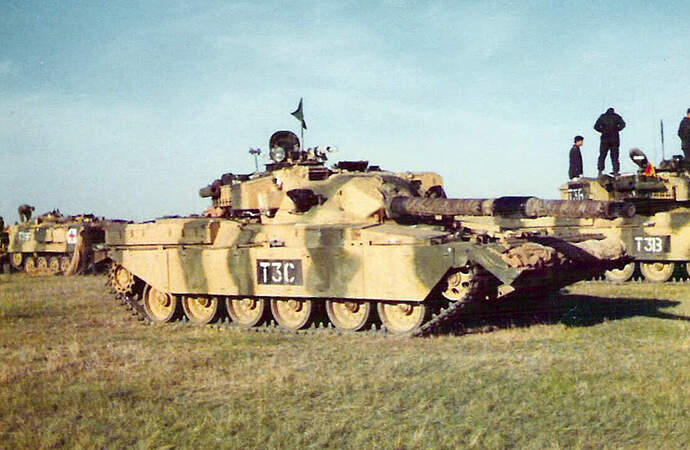 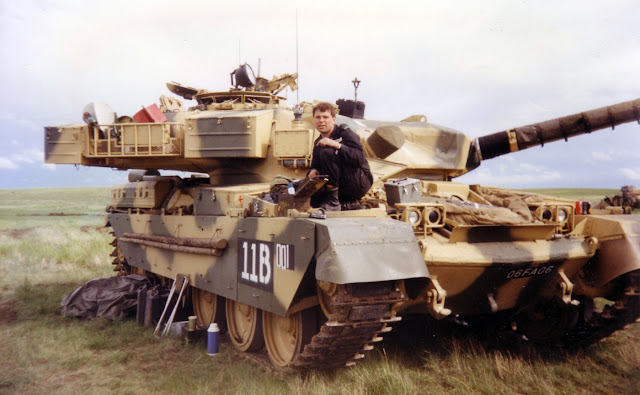 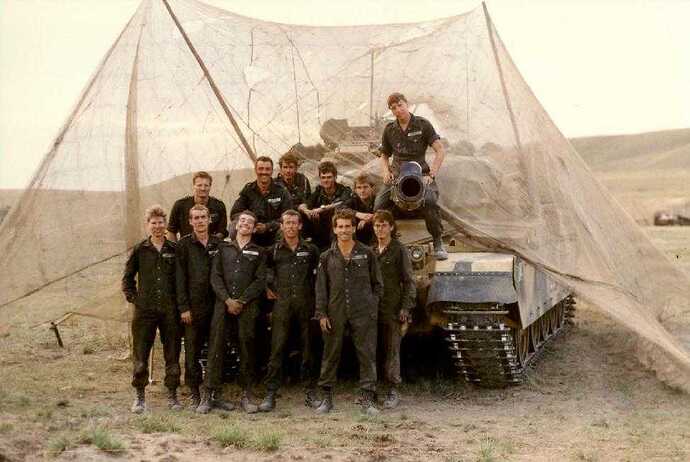 (I never did find out what the logo on the third oil drum was, but went with a suggestion that was made on another forum). This is a 1/48 scale resin Ferret with some modifications. 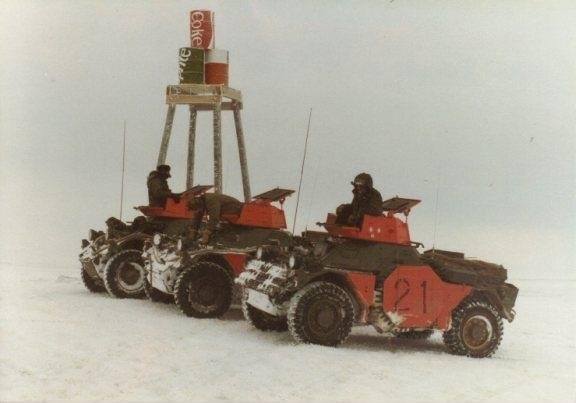 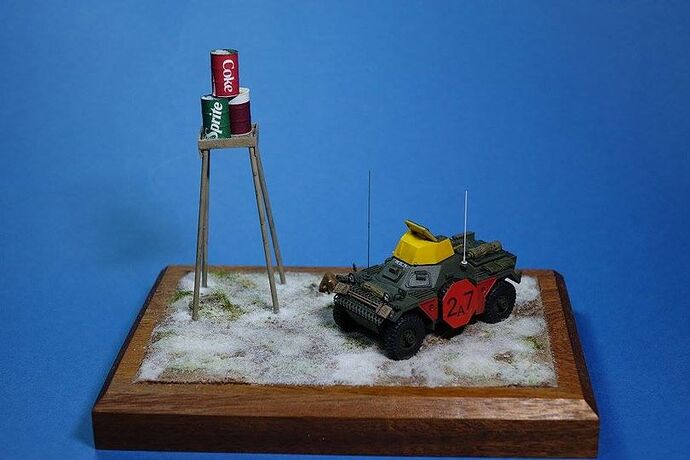 I would have said Campbells soup, but they are red on top and white on the bottom.

As Max said, the cam nets would be stowed, never draped over the turret or the barrel… That never usually ends well and instead of 1 cam net you end up with lots of pieces with massive holes in it lol.

That red and white can is a pain, I could never find out a definitive answer, it wouldn’t surprise me if it was Campbells soup and they got the colours the wrong way round.

The last time I remember when I was out there the the bottom three cans were a sprite, orange Fanta and I think it was Bud or another beer, with the coke still on top as per coke tower.

Nowadays it’s as per my BATUS Stillbrew build and Dio, just 4 red and white drums on the ground, holding a single long pole with one coke drum on top. 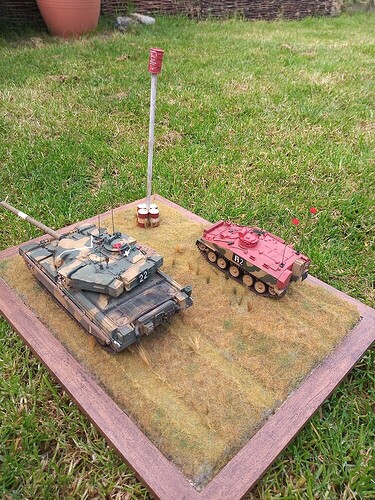