It only takes a brief look at this figure in grey resin to spot the character the sculptor has managed to achieve. The face is one of the finest sculpts I’ve seen recently and the rest of the figure is very nicely detailed down to the writing on the medal. This bust is from Medieval Forge Miniatures.

Unusually for a bust this comes with four headwear choices- a pilotka, a helmet with camo cover, a Cossack fur hat or just a bare head to show the nicely sculpted hair. It’s nice to have a choice like this and each one does change the look quite a bit.

Looking for references I found the sculpt is based on a real person, Guard Senior Sergeant Alexei Grigorievich Frolchenko who was a scout and was awarded the bravery medal seen in the sculpt. He was also awarded the Order of the Red Star (two ranks below the USSR’s highest award for valour) for his actions at Kursk in 1943, a detail left off the sculpt. 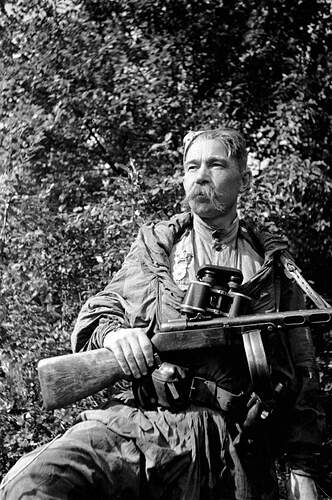 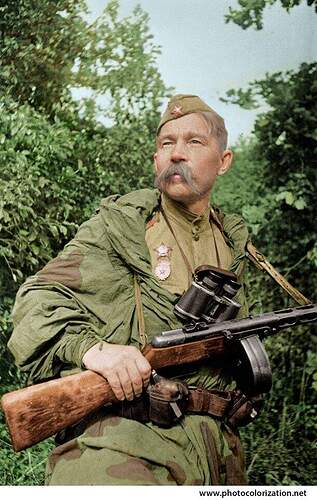 Pretty much all the other details in the photographs are present. The only problem for me, before painting, was my hesitation at the amoeba camouflage and how I should paint his hair. With the camo issue I decided to take the easy way out and copy the pattern of an artist who already painted this bust. For some reason I developed a fear over trying it myself and making a hash of it as it seemed to me that either too much or too little of the dark color could ruin the look of the smock. Anyway, on with the pictures. 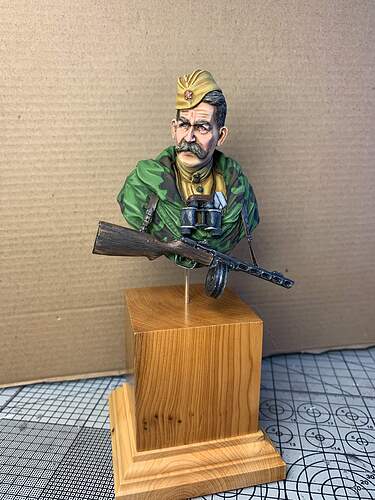 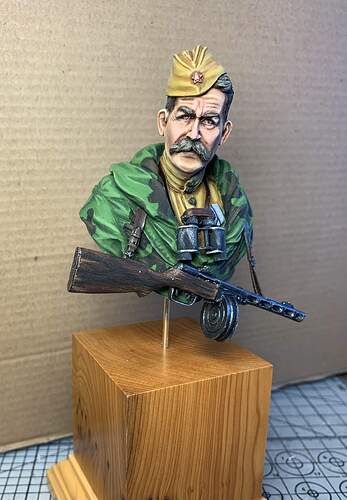 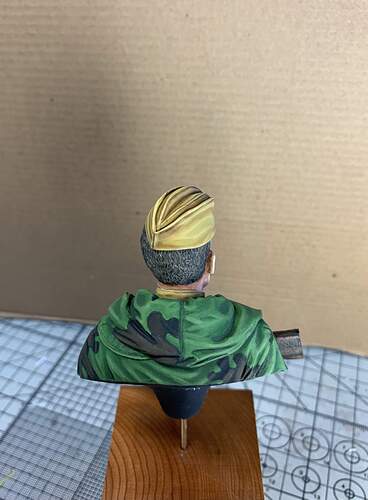 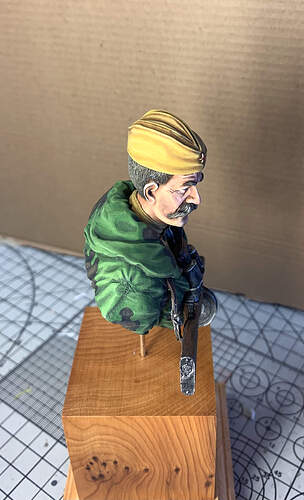 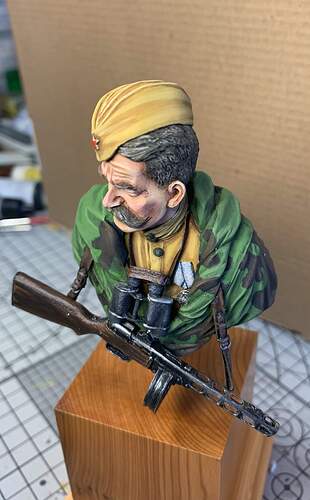 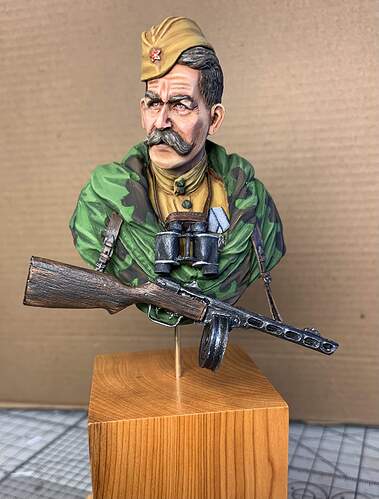 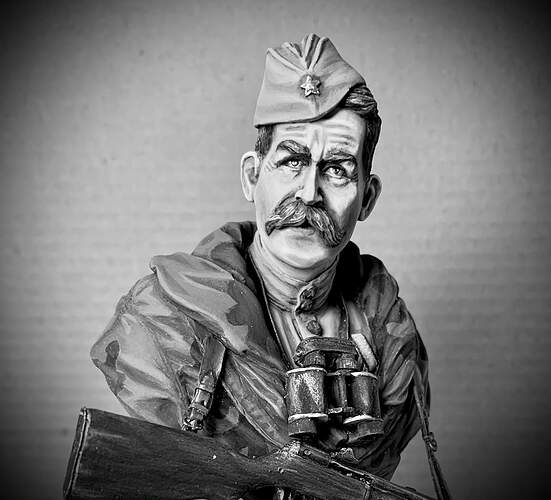 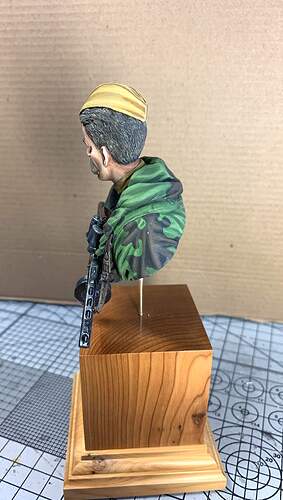 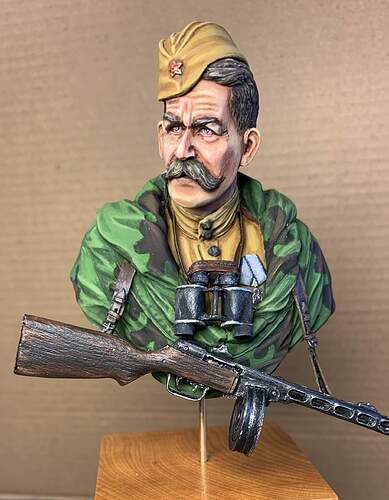 A fear of wrecking the smock was the least of my problems after messing up the face painting on my first two attempts. Luckily Mr. Hobby Thinner can strip a head back to resin pretty quick! This did give me more time to decide on the hair color.

The bust I had used to get the amoeba pattern had the hair as blonde going a little grey. Senior Sergeant Frolchenko seemed to have dark hair going grey- in the colorised photo above you can see dark to light grey on his head and moustache. I was still wondering what to do when I had finished the eyes where I went for a brown/hazel color. Sitting back and regarding the still unpainted hair and noticing the fairly stern look the eyes had produced I saw a certain Stalinesque quality to him.

With this in mind I set about the hair and as you can see I went for a look with not too much greying hair, mainly going for a medium to dark brown shade. The hair is so well sculpted that even a slight color change here and there will really make quite a difference to the busts appearance- rewarding the painter with a truly unique look.

My only problems with the model were the PPsH-41 sling- the two pieces that emerge from under the smock hood are brittle and very tricky to place accurately on the back side of the gun. The other issue was a small, ignored area of the sculpt on the figures right hand side between the binoculars strap and the smock- it is just a small space where the uniform shirt can barely be seen and is awkward to paint. I would have rather this space been utilised as in the photo of Senior Sergeant Frolchenko where you can see the Order of the Red Star and (what I think) is his Guards Army badge.

Those minor issues aside this is a stunning sculpt that was enjoyable to paint.

As always any comments, criticism etc are welcome.

I think it looks great. He has quite the stash!

I think you did a great job on it! It is a great sculpt with loads character for sure , just like the real life subject. Again great job.
I may have to switch to busts because I’m having a hard time doing 35th scale figs lol

Thanks mate, I appreciate you stopping by. Definitely give busts a try- they are very enjoyable to paint. I’ve been doing figures of various sizes for quite a while and still find 1/35 a challenging scale- but rewarding too and there’s always some great work by various modellers on here for a bit of inspiration!

Very nice all around!!!
I like the binos…they have that perfect worn look

Thank you, very much appreciated.

Personal I think you are did a great job, however I’m not sure the photo’s are representing 100% of the good work you did. For the head you have created some real character.

Thanks Jan- very nice of you to stop by and leave a comment!

Always trying to be honest

Of course Jan- I’m always happy for constructive criticism.
I’m really not happy with my photo work at the minute to be honest. I’m using my phone and I think it is a decent camera but I just don’t think I’m getting the most out of it. I need to sort myself a better background for photos too. There’s always something to be improved