After having being able to finish a project or two I was motivated to continue and - if ever possible - to finish one of my many models I started. So - looking into the shelf of shame this little canadian Leo caught my attention and I decided to take a deep breath and to dig into it again.

I was posting the progress on the old Armorama-Forum and would have continued there, but - I guess this is the place now.

Here is a reminder of the state of the project at the beginning of 2014 (Jesus! That is quite some time ago) and in the meantime only some primer was added. 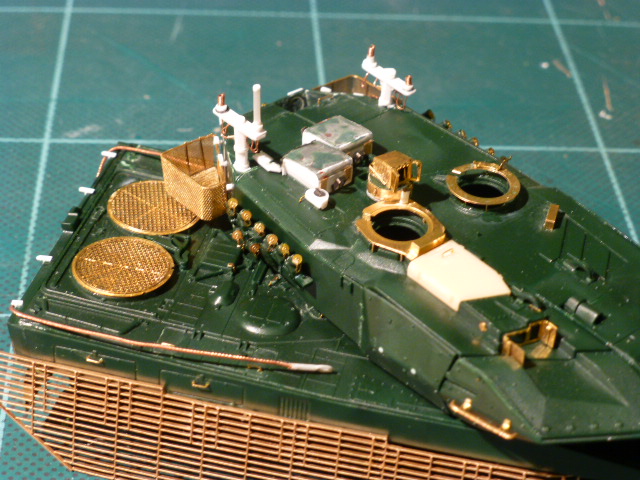 In case someone is interested - here is the link to the old blog:
(Armorama :: Leopard 2A6 CAN in Braille (the slatty one))

I always wanted to show the Leo in a forward post watching the countryside. For quite some time I had a fair idea how that should look but for some reason it would just not work out well when I tried to lay it out. But some weeks ago a new idea began to form which I finally liked… 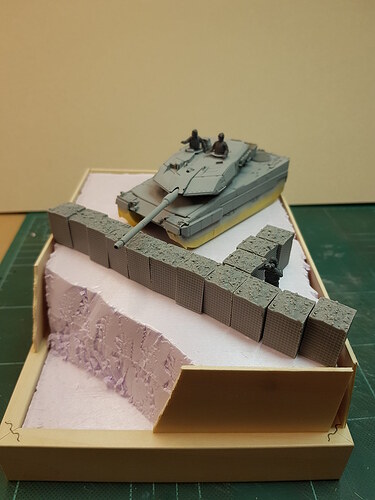 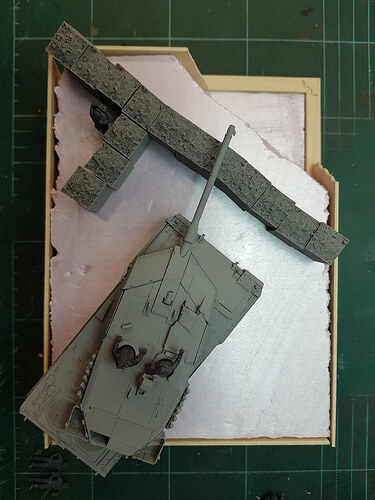 In the meantime the little vignette was build up:

The foam plates were fixed with toothpicks and a lining from Balsa wood was constructed. The groundwork consists of plaster in which some pieces of coal were pressed. The level ground received some gravel and the area in front of the post an assortment of different stones. The Hesco-bags are from Black Dog and were glued together and then pushed into the still wet plaster. The “wooden” frame will provide shade for the lookout. 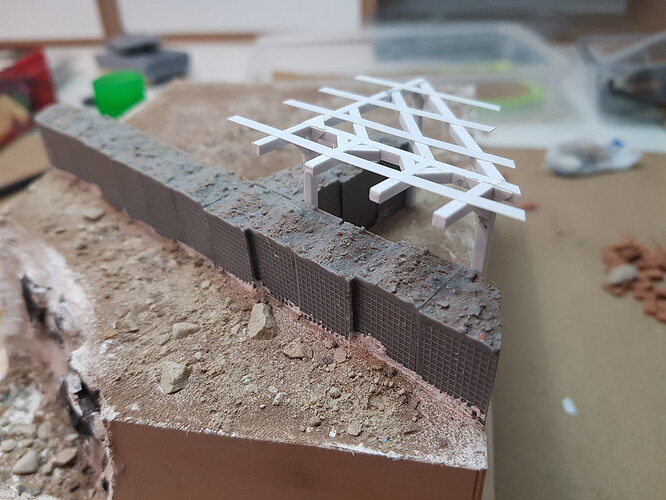 The roof was made from brass PSP-plates: 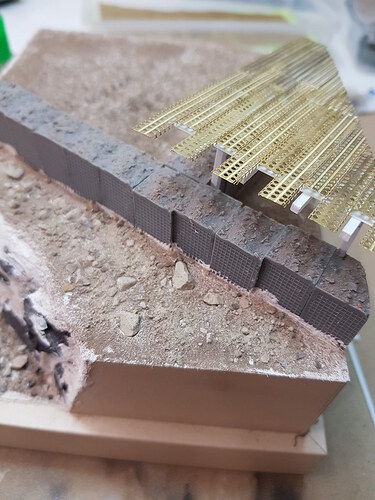 Sand bags provide some additional protection. They were formed from GreenStuff. 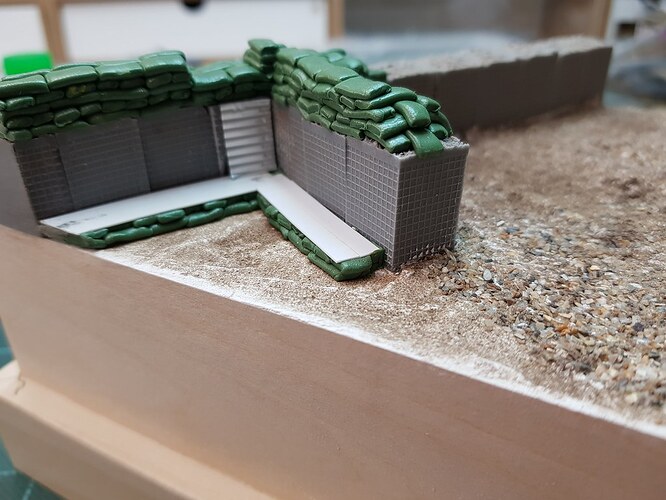 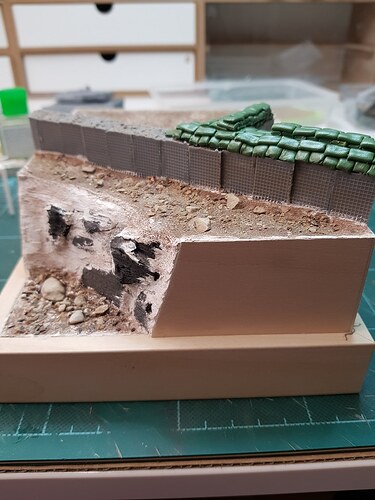 All Groundwork was finally fixed with diluted white glue and everything was primed with Primer from a can. Basepaint is Tamiya satin black. 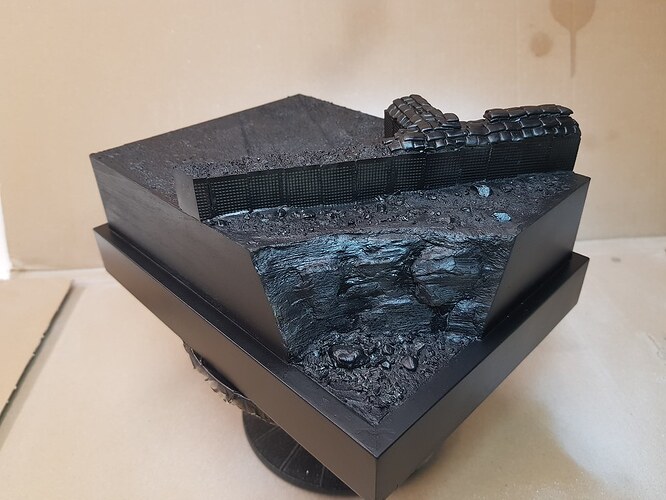 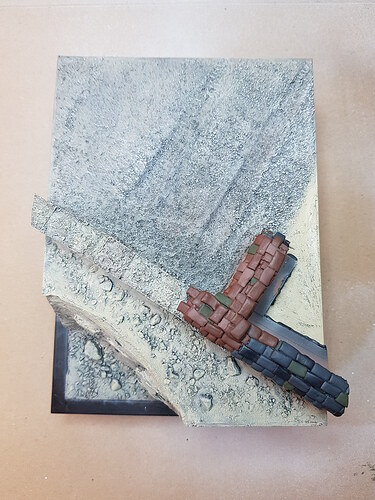 Having found correspondent reference the sandbags were colored in three tones and some variation was added too. 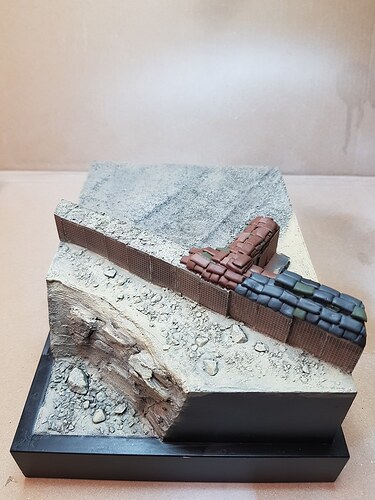 Here you see it with the PSP-plates painted and the Leo in place. 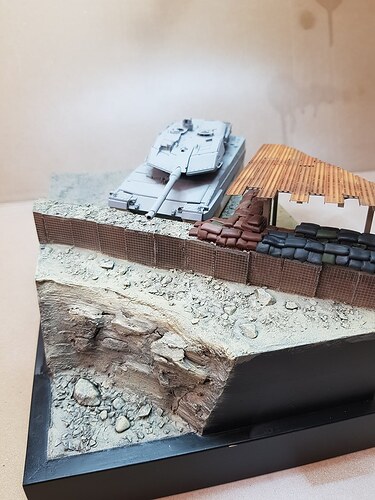 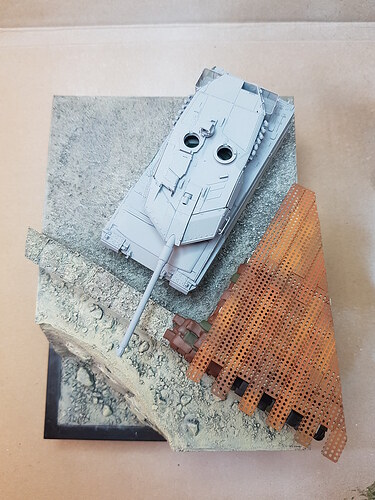 The wooden rack was primed with buff and woodinized with an assortment of various brown oil paints. 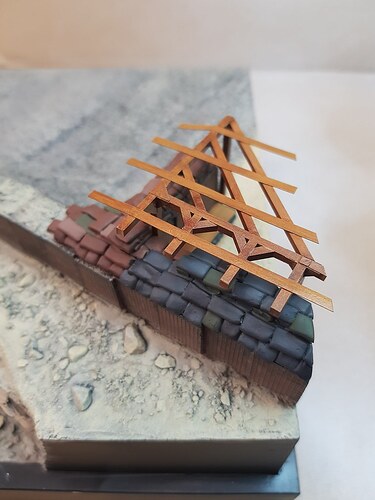 That much for now. Lets hope that the motivation will carry me over the two big hurdles: 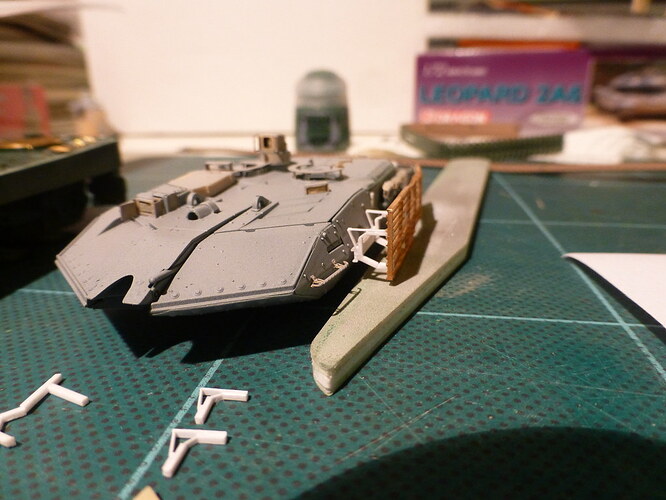 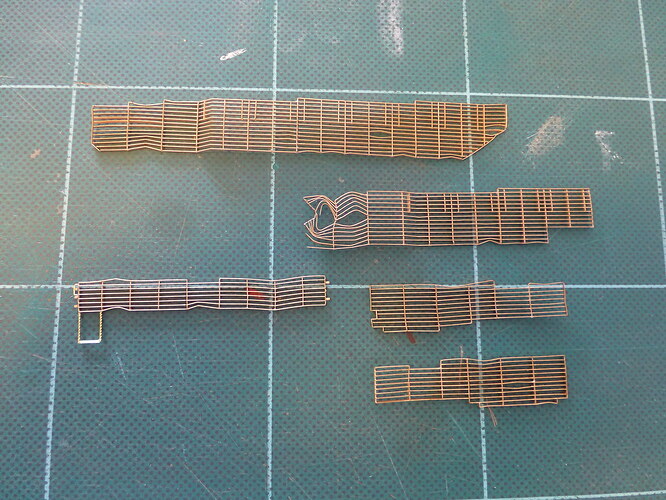 And the Barracuda matting: 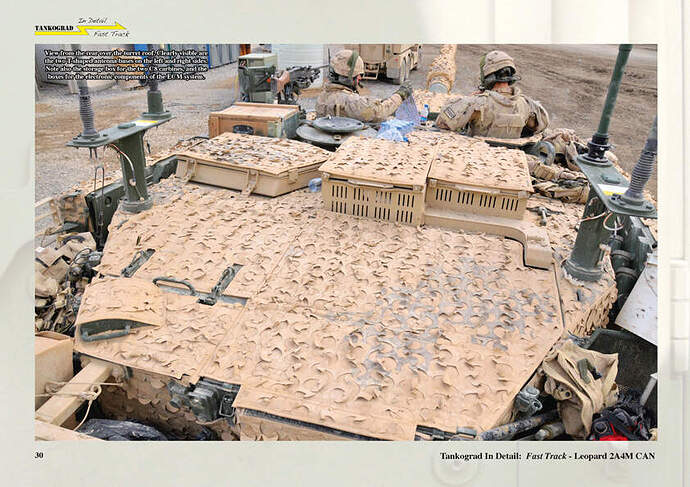 Not my scale -but oooh yeah,

Hi pod3105, obviously my kind of cat too. You´re welcome to follow…

Some progress:
I want to attatch a tow bar to the rear of the hull´s slat armor. This tow bar is not part of the Revells Leo kit and unfortunately my spare box did not provide any either. So I had to scratch it… 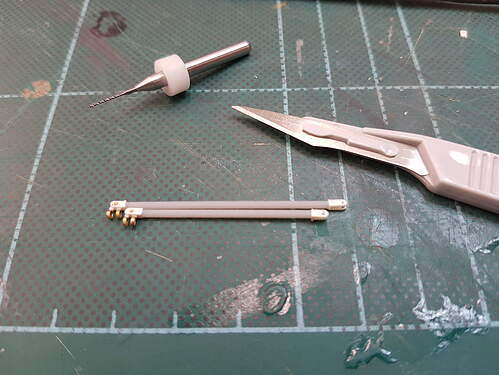 Next step was the umbrella the canadian Leos were fitted with.

Took me a while to figure out it´s construction. This is the interpretation I came up with: 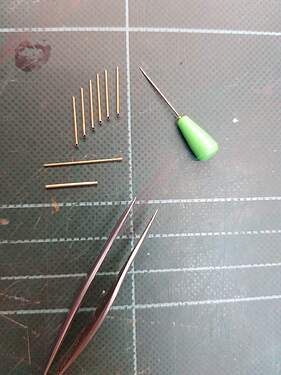 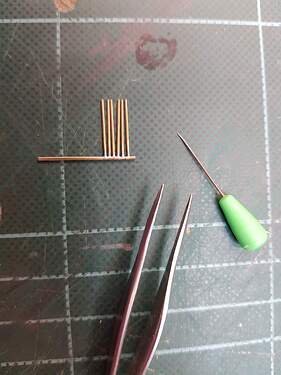 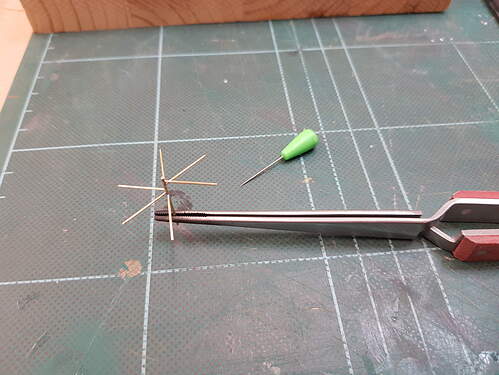 and the final result: 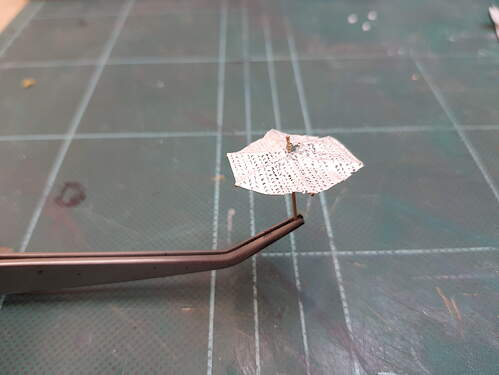 A nice weekend to all of you

Some Progress on the Barracuda mats. 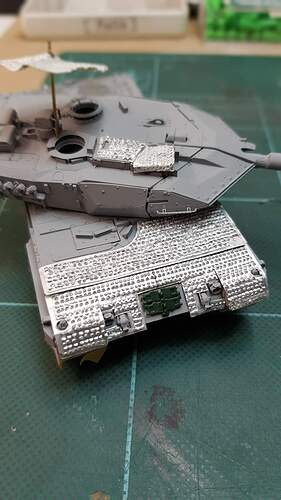 The rear mat on the hull already received some wear. The frontal one is still brand new. But before it will be definitely fixed on the hull I will damage it a little bit to give it a more used look.

This is gonna look awesome when finished!
What are you using for the Barracuda?

Thanx Panzer_modeler. I sincerely hope so. 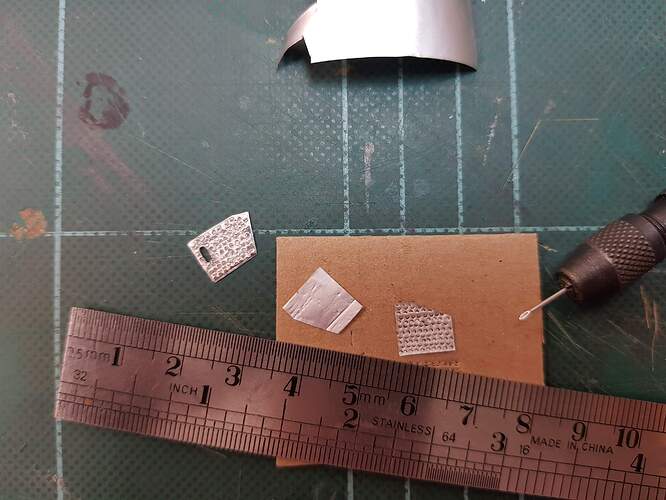 Each mat needs two templates from foil. One is then cut to a slightly smaller size to mimic the seam the mats have at the edges. The smaller foil is then regularly perforated with a hypodermic needle (0,6 mm). I place the foil on a thin cardboard for that. The needle is then pushed through foil and cardboard. This way a semicircular cut is achieved. With this technique I replicate the pattern of the Barracuda-mat. The perforated foil is then turned around and super-glued to the first foil. I use glue only at the edges so that I can bend and tear the perforated part more or less to mimic wear and tear.
I hope I could make myself clear.

So, some more mats to produce. 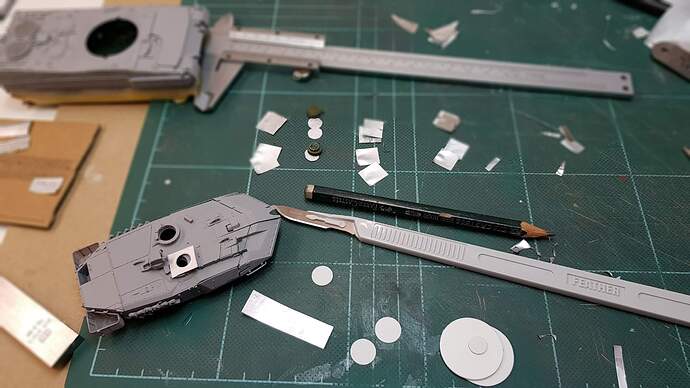 Thats a great idea!
Your build just encouraged me to do the same kit in 1/35.

Thanx! In scale 1/35 you have some options to make your life easier. For example AK interactive offer precut camouflage nets that should serve well in constructing the Barracuda mats. If something similar would have been available in 1/72 I would probably switch immediately.

Yep, Im planning on AFV club pre cut camo netting!
I think the method your using will look great for such a small scale.

Progress is slow and outdoor activities prevent me from modelling. Some of the mats for the trunk have been fashioned. Time to get back to the bench again. 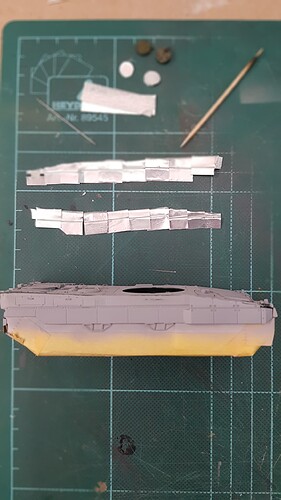