My Initial King Tiger aka Porsche King Tiger is at long last completed and going on the shelf. The Porsche Turret is a complete misnomer. However, since most people are familiar with the term it was retained for the name plate.

Pictures were taken with & without flash. Please feel free to comment and provide suggestions. 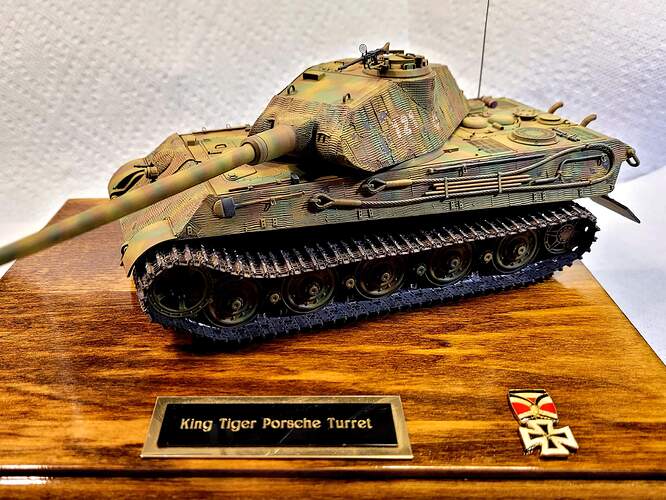 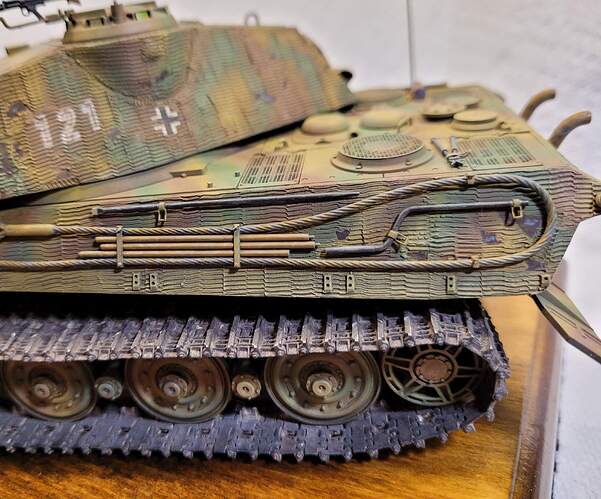 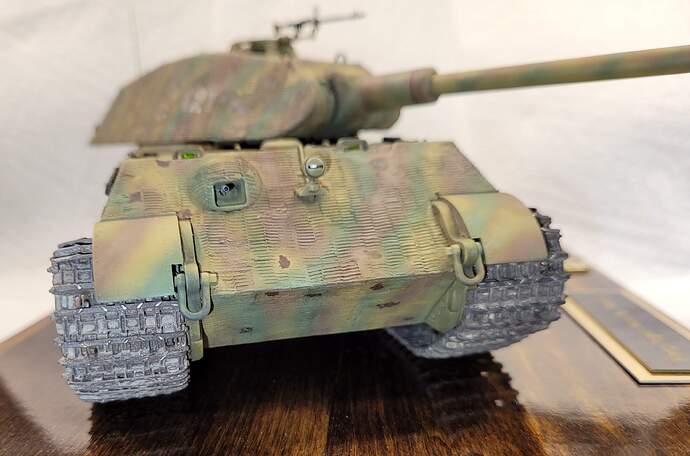 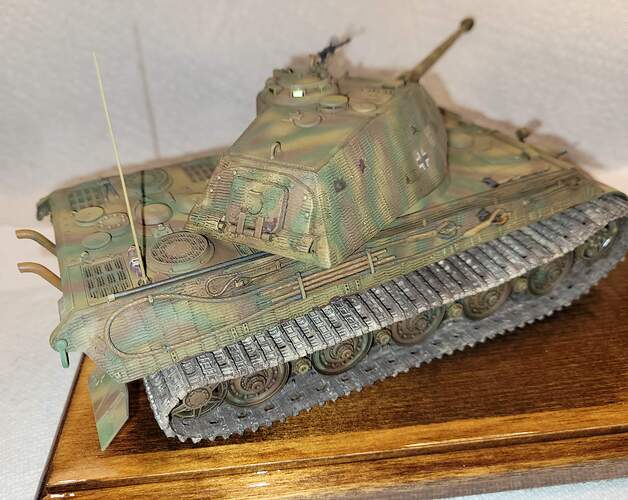 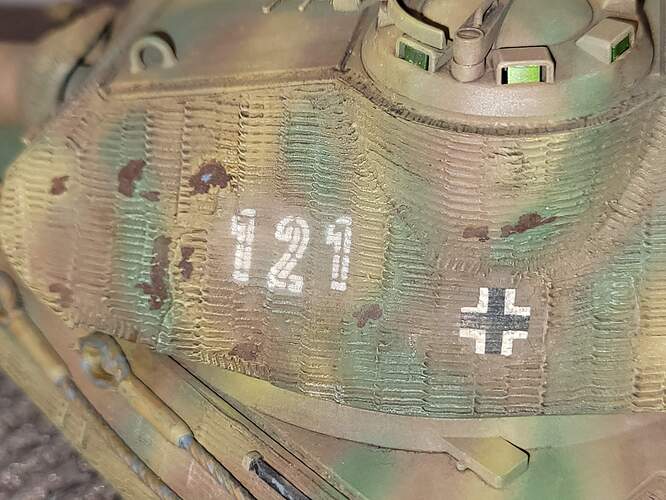 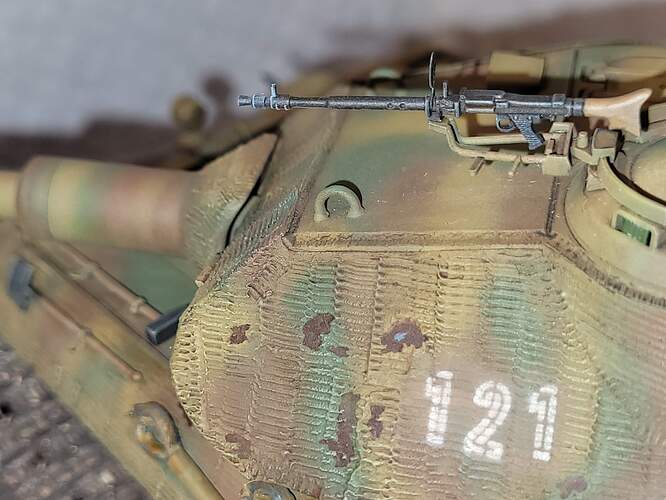 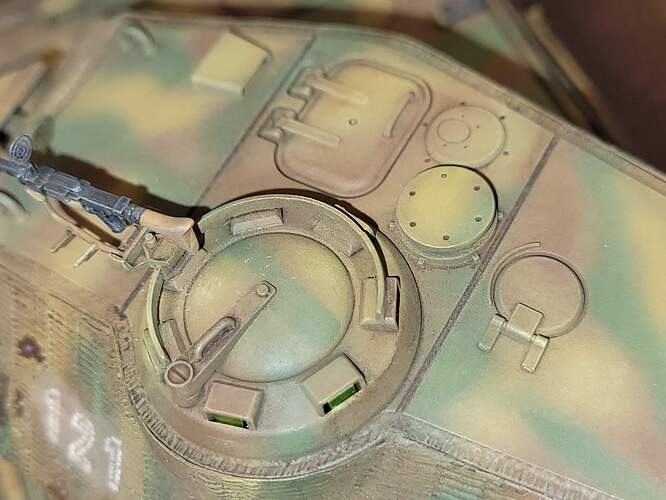 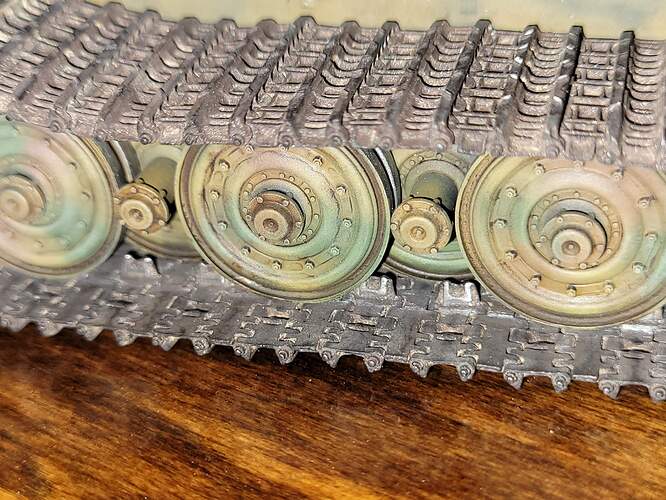 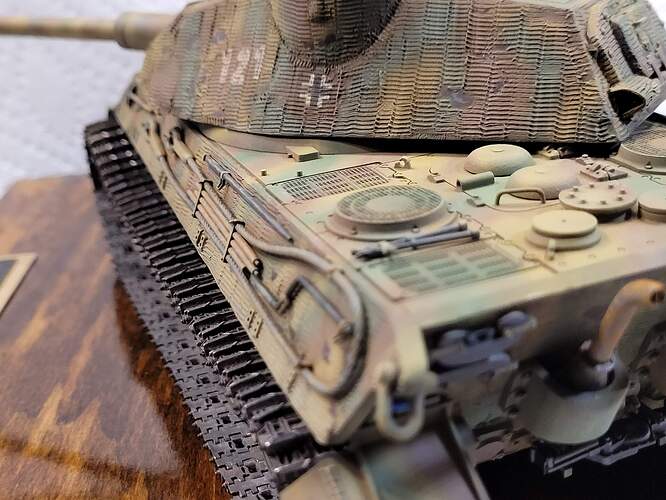 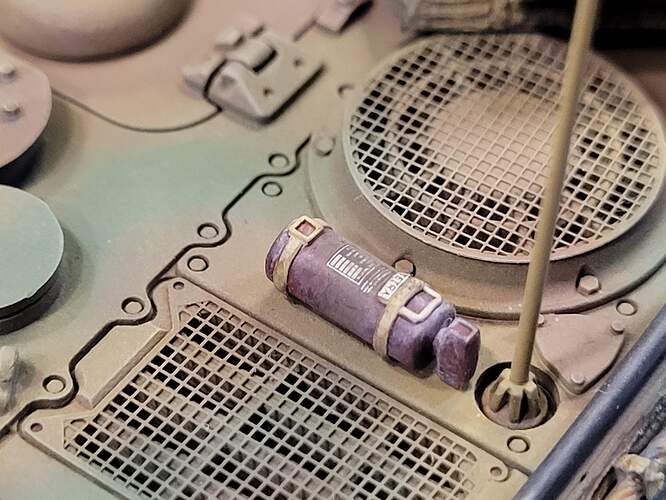 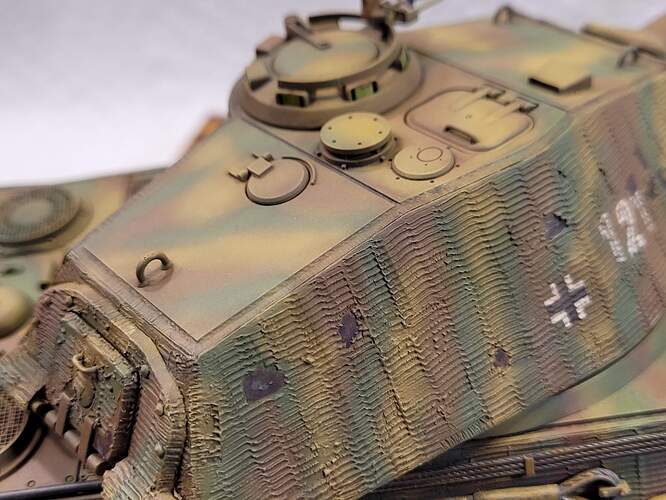 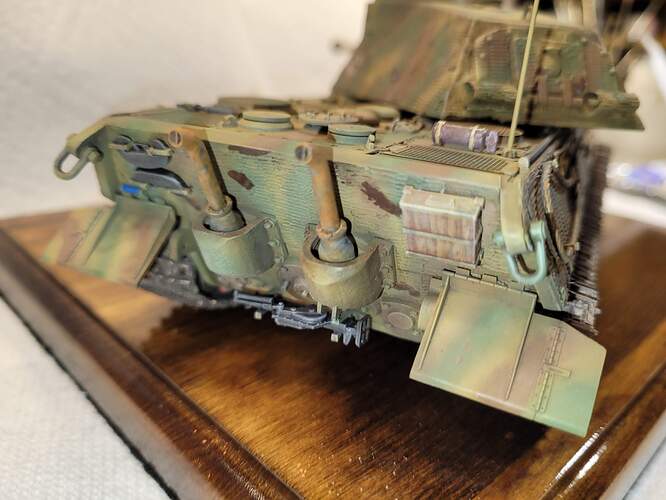 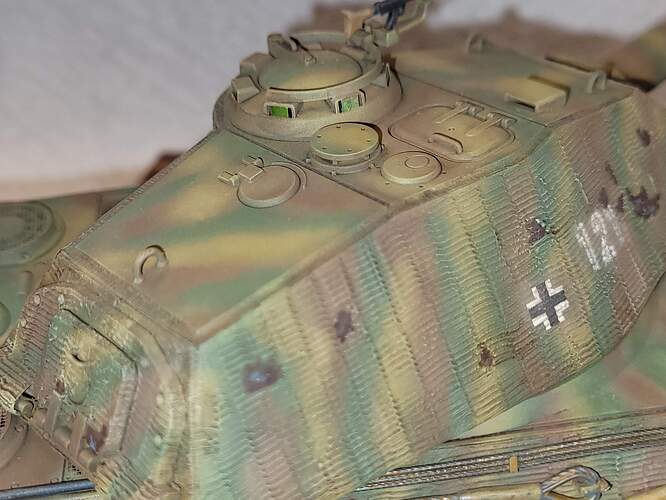 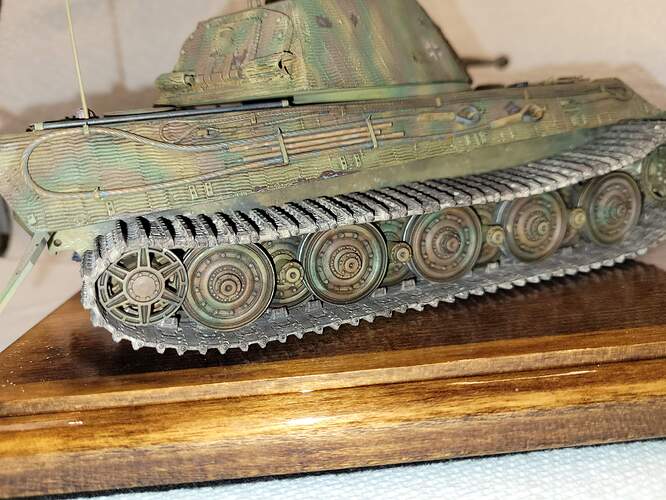 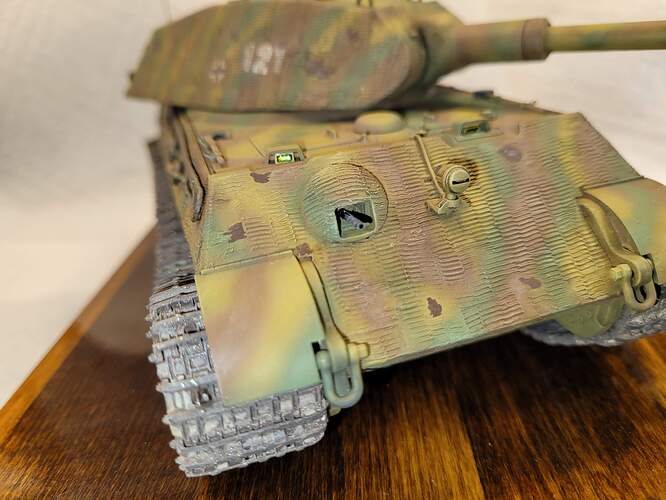 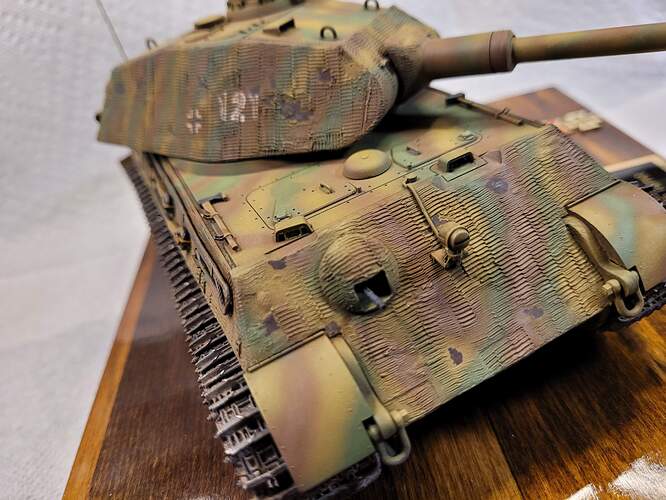 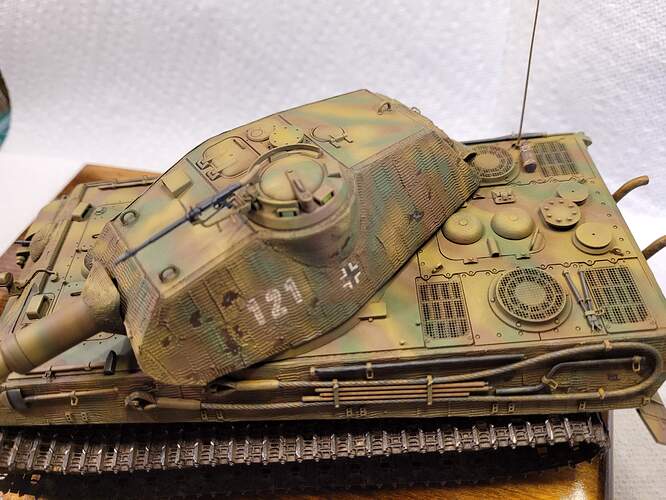 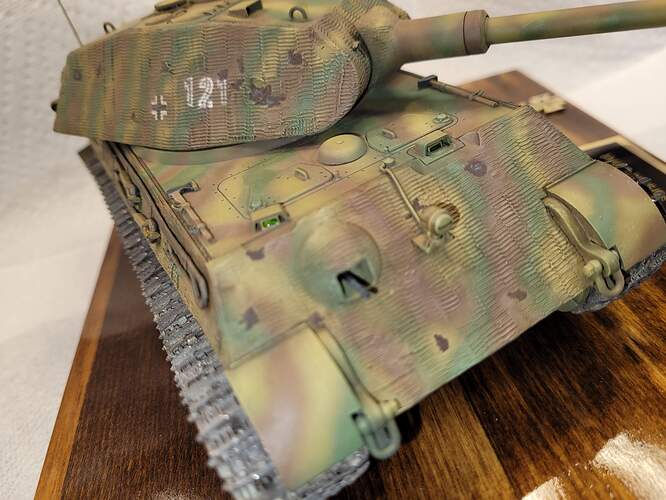 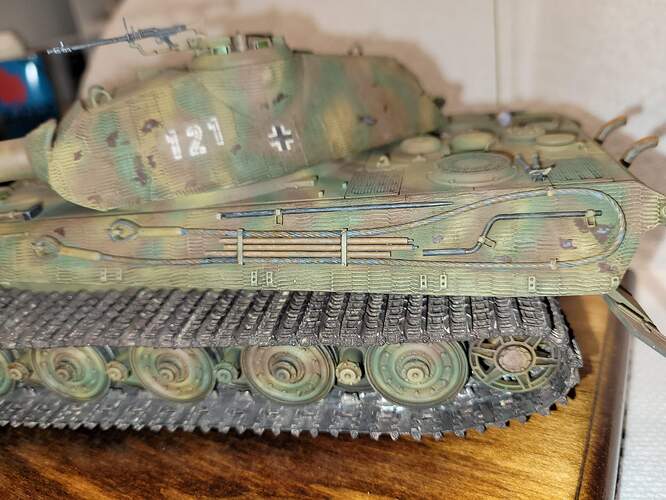 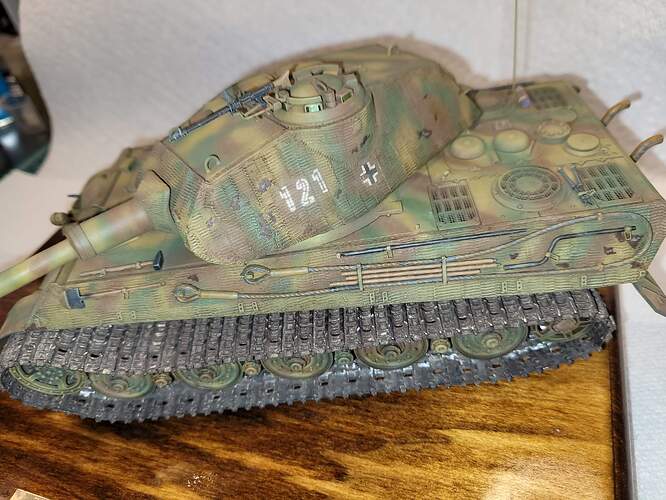 This kit bounced around the local model club for probably two years before landing in my stash. Started in late 2003, I expected the KT to be roughly an eight week build. That was obviously overly optimistic as the model was finished today, nearly eighteen years later. In anycase, happy project #7 for the year is going on the shelf.

Being a good Tamiya kit the model was easily assembled with no issues. Fun, excellent build start to finish. All of the mishaps were self-inflicted…like when I broke the rear idler arm 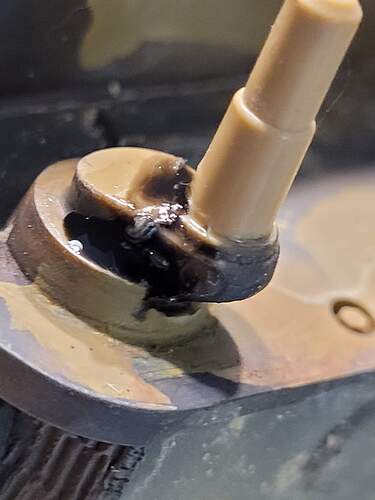 Initially Tamiya link to link tracks were planned. After discovering, I’d missed several faint punch marks and the old L2L’s popping apart several times, they were replaced with an ancient set of original Friulmodellismo King Tiger tracks with the folding clasps and no wire from the early 1990’s. 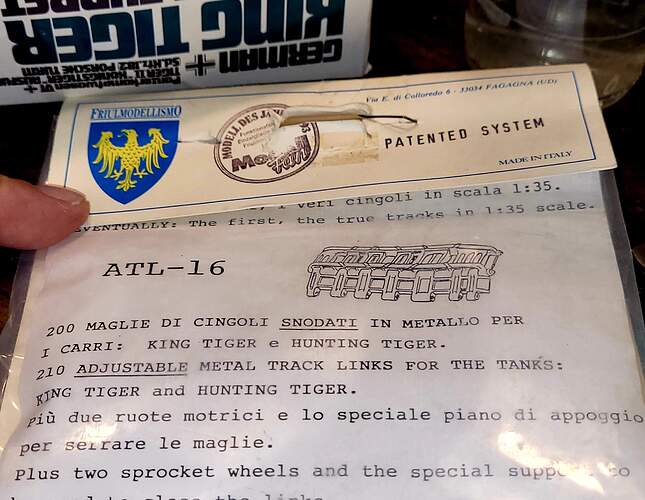 The old set of Friulmodellismo tracks had also bounced around the club. About 1 out of 7 links was warped or malformed. 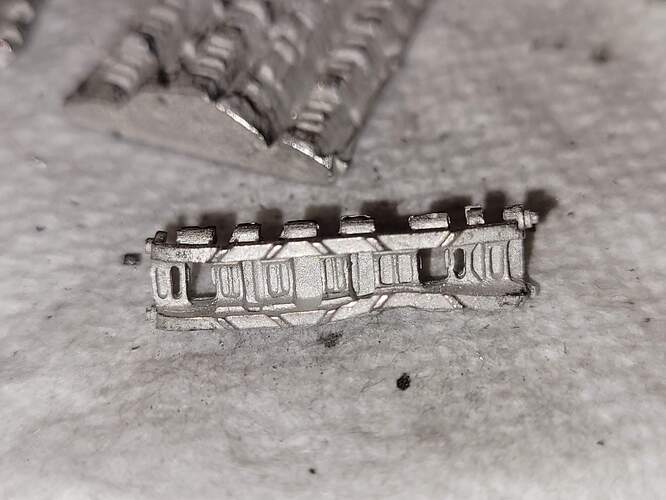 I’ve done five sets of the very old folding clasp style Friulmodellismo links. This was the most challenging set to assemble due to warped parts. 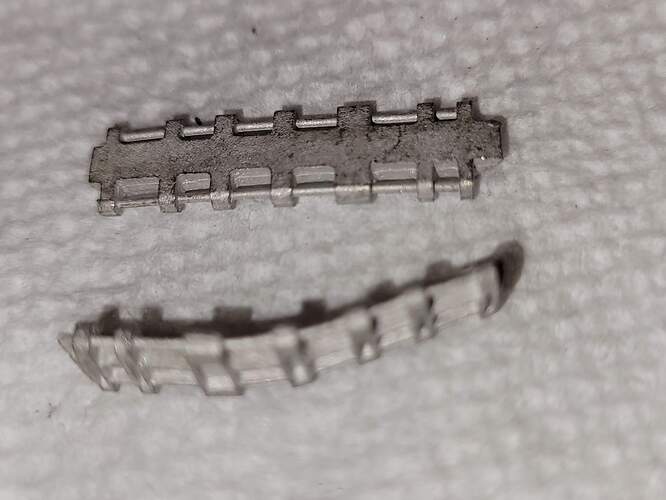 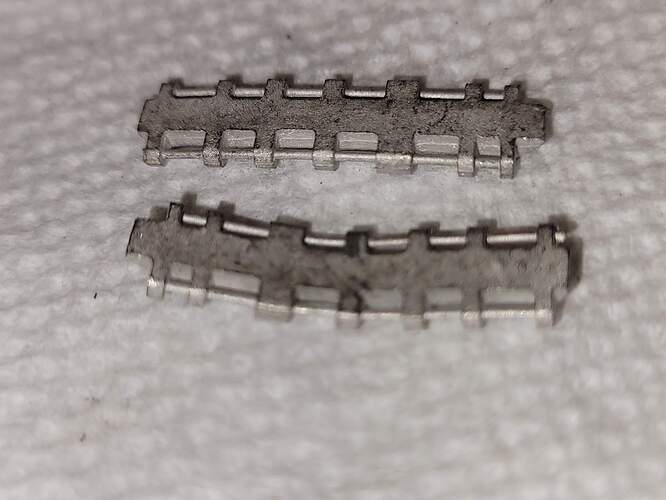 However, there were more than enough good links for both tracks and 6 pairs of spare links if needed. 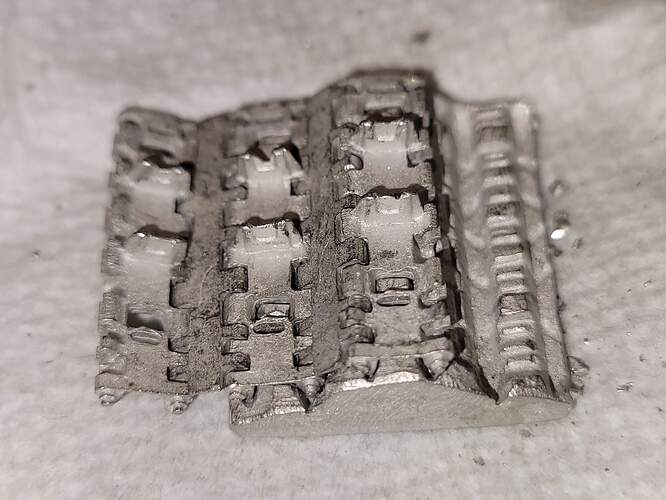 Tamiya’s basic King Tiger photo etch for engine deck screens was used. Lion 's Roar tool handles were used with otherwise stock tools. One of Calvalier’s excellent Zimmerit sheets covered the hull and turret quickly and with little issue. Likewise, a Tank Workshop set of radiators were placed under engine deck vents in the lower full. They basically are invisible but painted. Doing anti-flashlight duty by sealing up the engine deck openings. Aber brass 2m radio antenna and Aber MG34 barrel for the hull MG round out the added details. Archer dry transfer used for the fire extinguisher TETRA.

The inside face of the Bosche headlight was painted chrome silver to made the flashlight judges happy. While the hull had two periscopes provided, none were provided for the cupola. Evergreen strip painted silver and then painted in clear green was used to make a facsimile of turret vision blocks.

Mr Hobby Mr Mark Softer worked wonders in forcing the thick film Tamiya balkenkreuz to conform to the Zimmerit. The turret number was airbrushed via a stencil.

I was surprised by buzz on YouTube that suggested a wash applied to Zimmerit is bad idea because it will darken the Zimmerit excessively. I decided to apply my typical oil wash just like it was 1995. Testing the wash on a junk model before ensured it wasn’t too dark before applying to the KT. 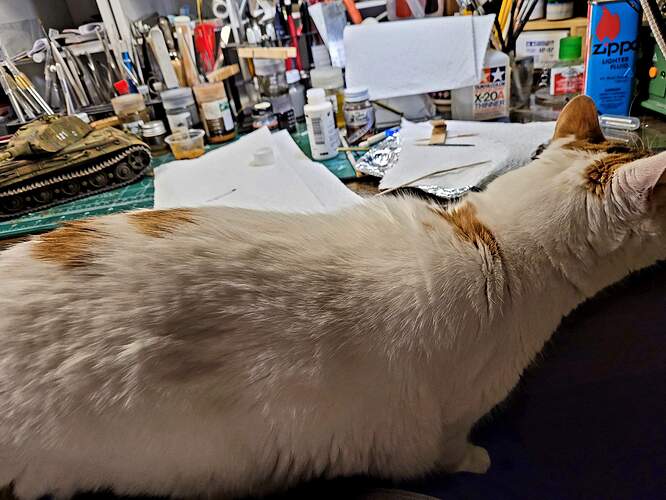 Very nicely done Wade. The extra little touches like the Tetra label and headlight details make a difference and add loads to it. It is nice to this KT version as opposed to the usual everyone’s favourite Henschel turret.
Great paint scheme and nice gentle and not overdone weathering.
Very well done and another one finished. Great effort

Really like the paint job, weathering and the attention to the small detail.
EXCELLENT KT!
Cheers,

Love the finish Wade! The colors are perfect and the chips draw the eye just right. The washes are perfect. Excellent job as usual.

@Johnnych01 John, thank you. It was a fun build.

One day I want to do a Henschel. A family acquaintance who served in Patton’s 3rd Army at the Battle of the Bulge once described an unwanted late evening close encounter with a dark colored almost black King Tiger. He only talked about this once when the topic of fighting in the snow came up and how its typically depicted wrong by Hollywood.

Tangential ramble…
(My guess is in low light it was probably a mostly Panzer Olivegrün KT with traces of red-brown & dark yellow…aka Ambush scheme or similar.)

Basically, he was driving an officer in a jeep when the KT opened up with the MG. They wrecked, then took cover by the wrecked jeep as the KT poured on the MG fire. The KT fired a round of HE which was high and exploded over head in trees. He said in that one moment he wished he’d never been born it was so terrifying…the most fear he ever experienced. He’d fought with 3rd Army since North Africa and was a hardened veteran at that point. In short, they crawled into a small depression and eventually to safety. Had a bullet hole in his sleeve but was OK.

Someone actually asked are you sure it was a KT and not something else. He laughed and said he saw enough burned out Pz IV’s with skirts & broke down Panthers up close to know the difference.

@Grauwolf Joe, much appreciated, thank you. I decided to model PKT 121 of schwere Panzerabteilung 503 around June/July1944. My guess was 121 wouldn’t be too beat up at that point.

My 2nd try at chipping…the 1st is hidden under a T-34-85:) I know Zimmerit definitely chipped and often fairly large spots so that seemed like safe ground to explore.

Out of the bottle the old Floquil Military Colors for Panzer Dark Yellow, Olivegrün are in acceptable range for RAL colors in my opinion at least for 1/35 scale. The FMC Panzer red-brown maybe equivalent too but I dislike it. In the past it tend to want to transition towards “pink” when I weather. So I made a custom 50/50 mix of FMC Panzer red-brown (too red IMO) and FMC red-brown (too brown IMO. I’m happier with the mixed color compared to FMC RB.

Loved the Zimmerit! Actually I couldn’t find anything that, as a builder, you shouldn’t be proud of on this one. Thanks for the show! The one about misidentifying the KT is pretty common when you think about it: it is hard to be detached when something that weighs-in at anywhere from 25 tons (Pz IV) to roughly 70 tons is trying to kill you. Repeatedly. Tiger phobia was pretty rampant at the time in all theaters where they were encountered.