I am looking at adding a tiger to the stash. First one I’ll have every built believe it or not. I am looking at the Border early tiger (kit # Bt-010) and the RFM Initial production Tiger early 1943 (kit # RM-5001U).

They both appear to be fairly nice, and each is the same price. For anyone who has them/has built them, which is a better kit and why?

More generally, would people say the RFM or Border tigers are better?

RFM fan between those two.

Any particular reason? I’ve heard great things about the RFM tigers but was curious what makes them better?

Don’t know if I should add my 2 cents worth on the subject.
I have both in my stash. Neither started… My Border Leo2, IMHO, was the best kit of 2020 !
I also built RFM’s Sturmtiger during the pandemic. Other than the shell racking system (?), operator error (ME?) I liked it. Tracks were a bit tedious with the single guide horns but you get into a rhythm and all of a sudden you’re done.
Border’s Tiger had a lot of extra stuff to “load out” your tank and other parts to replicate other tigers. Based on my Leo2 experience this should be a winner too.
I would also look up David Byrden’s accuracy reviews and get his comments. Nothing on the construction of either kit just the accuracy of what’s in the box.
Good luck in your choice. I don’t think you could go wrong with either kit.

Thanks! I’ll take a look for those reviews! I was eyeing that border Leo2 it looks outstanding. I’ll proabaly get it eventually

I can alway find a couple of things wrong in an RFM Tiger - usually the paint scheme - but they really do try and they get outsdanding results.
Border copied other kits in designing their Tiger and it has some annoying problems. The same level of care just isn’t put into it.

Thanks for the help on this thread! I added the RFM tiger I late! And it’s big brother 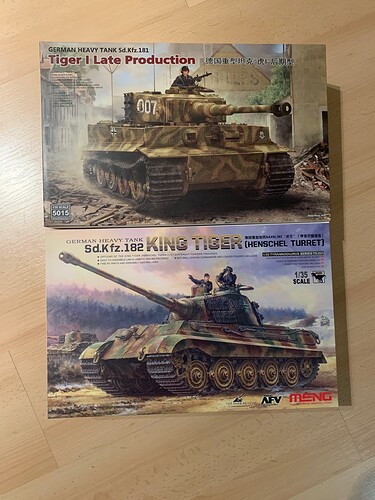 Have fun & post some progress pictures if you have a chance!

) I would reccomend RFM. Border definitely packs alot of features into their Tiger, and the whole metal barrel is a nice touch too. More generally, I think where RFM takes the cake is their refinement. Overall, RFM kits may lack some of the extras that Border has, but they will generally be much better researched and better proportioned than Border. Border model is a really awesome company, and if they ever start making Canadian tanks with figures I will personally sell my soul to them, but they lack alot of the refinements that other, older companies have. If you want to put the effort into correcting the kit, I say go for it, but RFM is probably a better bet if you want a straightforward build.

I took a peak at the RFM Sprues when it arrived and boy oh boy. It has to be nicest molded kit in my stash. My other kits aren’t bad, but the RFM Sprues are extremely crisp. I can see myself adding a panther with interior or Sherman with interior at some point. I’m very happy with the RFM purchase

I’ve been looking at their Sherman with the interior, could be a cool Korean war build for the Canadian campaign!