I saw this on another forum, and I thought there might be some interest here: 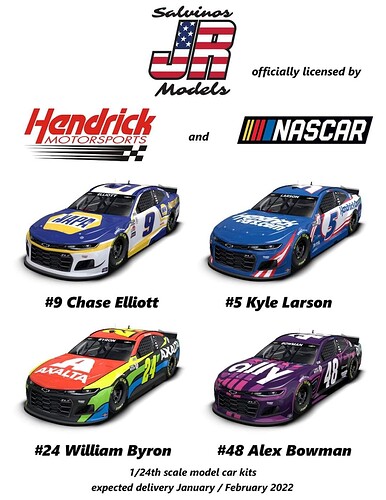 Yes, these are the 2021 cars, but apparently the 2022 cars are also in the works. Savinos JR currently does not have the Ford or Toyota licensings, so we won’t see the Mustang or Camry yet. However, it was noted that they wat to do every Petty car that he used, so they’ll need to get the Ford licensing for the 1969 Torino.

Some very cool schemes there, these guys are definitely making some big steps in their releases!

Thanks for sharing Jim

With Hendrick, NASCAR and GM licensing, as well as the old Revell/Monogram tooling, there are so many iconic Hendrick cars they could do.

Just to name a few!

Jim,
I’d certainly be interested in all 4 of the cars, as just the thought of having Chase Elliott’s and Kyle Larson’s current rides is getting my Nascar car modeling mojo starting to flow.

I’ve been waiting and waiting for them to get the Ford License as there’s so many iconic and current Ford drivers/cars I’d love to model.

Based on the announcement today, there will be no Gen 6 cars, unless they can get the tooling out of China from Revell.

The first will be the Nascar demonstrator, followed by the 4 Hendrick cars. 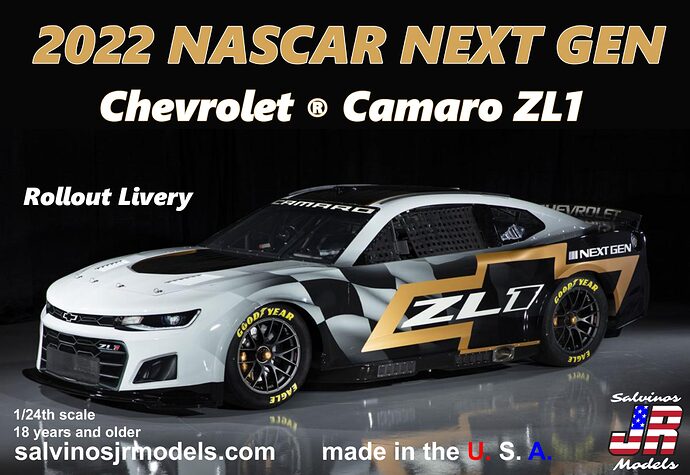 Now that really sucks. Hopefully they’ll get those molds out of China, but then where and whose going to mold those Gen 6 kits? It seems from how you wrote it that it’s Revell of China that currently has those molds.

Are there actually molds already made for the Gen 7 cars?

Salvino JR is making the Gen 7 from the ground up. Apparently right off of the CAD drawings from Nascar. To the point that that haven’t started cutting tooling, as Nascar is still making changes to the car.

They will be coming in both a paint and decal version, as well as a plastic colored, with vinyl stick on markings (will still be a glue kit, just apparently don’t need to paint it).

They are claiming that they will be the most detailed racing kits, to rival even Tamiya detail…we will see about that.

Only 2500 of the first kit being made (the Nascar demonstrator), the other team cars will have normal numbers made.

Yes, Revell has the tooling for the other kits, which are in China. The Car of Tomorrow and the one that came after it. More or less just need them for the chassis, they can tool new Camaro, Mustang, and Toyota bodies for the chassis. 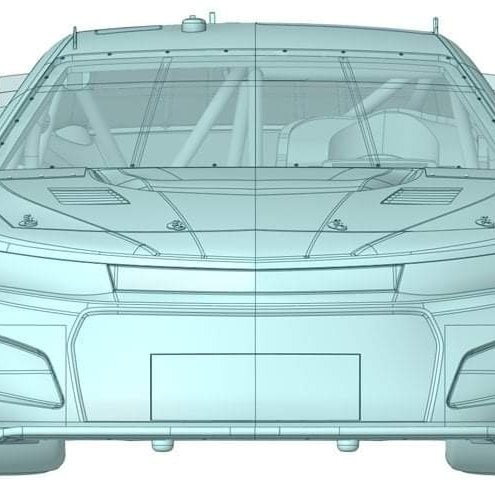 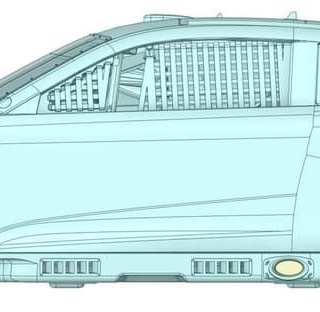 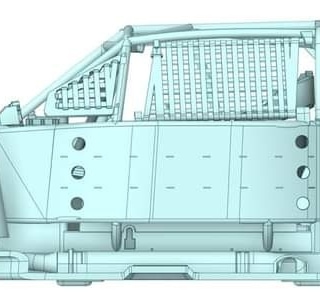 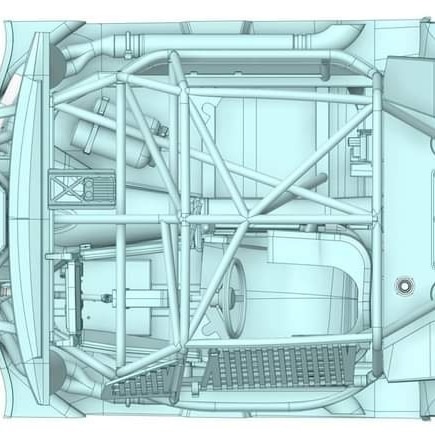 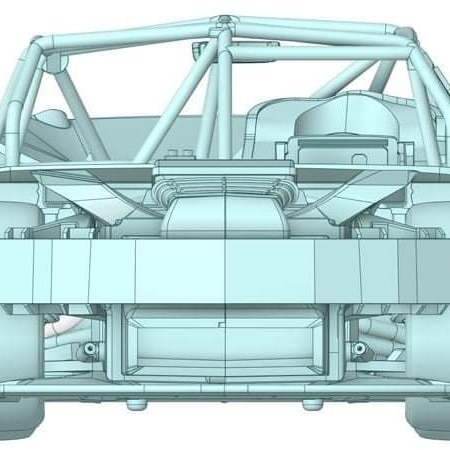 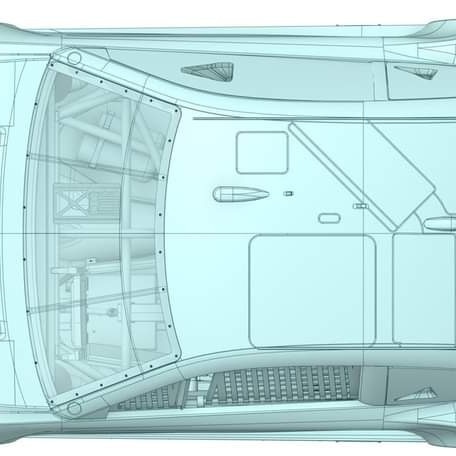 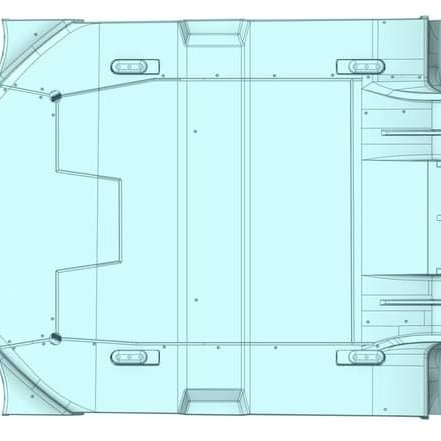 The drawings look nice, & Salvinos does seem to have good kits. As I understand it with their current offerings, the 1/24 cars are the old Monogram molds, but the 1/25 cars are new Salvino molds. Time will tell how good these kits actually are, and if they are reasonably priced.

Scott,
This would certainly be great news if indeed it were completely true, but I just don’t trust the Salvino boys all that much. The original 1/24 Monogram molds were stored in Morton Grove and were bought directly from the bankrupt parent company without tire molds nor decals. So they had to make tire molds and those tires are rock hard. At one point they played around with the front windshield and screwed it up so that it literally falls right through the opening! The Chrome is actual chrome and truly sucked. You can’t strip it off the plastic no matter what you try. Not even sure that paint or inks would adhere to it. I know because I bought two kits, never finished the Tim Richmond build, and the Hardees kits is still shrink wrapped in the stash forever more.

As for the Revell molds, yes they’re still reported to be in China and will most likely stay there as the Chinese Gov’t owns a major percentage of them. So with the Trump induced trade war with China, you can forget them cutting any kind of deal sooner then later.

As for their claims for the Gen 7 Nascar kit being 100% new molds from the original Cad drawing they have, that can be true if they actually have a company in China or the Orient willing to cut the molds. I doubt that Salvino has the manufacturing facility to cut all the molds, yet the funding for such a project.

Now lets talk about their ridiculous claims for the public demonstrator car. Detail equal to Tamiya. Come on, that’s pure BS from a company that’s never produced a kit anywhere near what Tamiya does. Do they even realize the number of design engineers involved in creating a super detailed kit? I highly doubt it if they made that insane statement. As for the two options: regular type of model kit plus a colored plastic kit with stick on Vinyl stickers. Now there’s a joke if I ever heard one. I’ve yet to see any colored plastic in any kit other then pure white or Black that was close to the actual color. And Vinyl stick ons making a come back. Just who do they think will buy those type of kits? Young pre-teens don’t build models like we did, let alone auto model racing community.

As you said, time will tell, but I’m betting that it’s mostly them just talking the talk trying to make them more important then they really are, at least for now.

I have had my dealings with SJR myself. They don’t take criticism well.

The Revell and Mongram molds they got, were actually from Atlantis. In order for Atlantis to get the other tooling that Revell had and wanted to sell, Atlantis had to take everything or nothing. So Atlantis pretty much gave SJR the stock car tooling for the cost of having the tooling shipped (pretty sure Atlantis got the Revell tooling for a song, after all Blitz (on paper at least) paid $50000 for the entire Revell USA catalog).

The glass tool was missing from the lot, and the tire tool that was there was worn out, which is why they had to make new ones.

Pretty sure the Chinese gov’t doesn’t own any Revell tooling. While they are obviously being held in China, Revell paid for and still own the tooling.

Not sure why they would need to have their tooling cut in China, considering they have done everything in the US so far, doing the Gen 7 car shouldn’t be any different.

Considering there hasn’t been tooling cut yet (as NASCAR keeps making changes to the Gen 7 car, and SJR don’t want to start cutting until the car is finalized), they can only speculate based on the CAD drawings as to whether it is “Tamiya” quality.

Multi-colored plastic? Bandai has been doing it for years, so not really anything new, just a matter of getting the dye in the plastic correct, which shouldn’t be that hard. Their vinyl stickers aren’t your grand daddy’s vinyl stickers. Whatever they are using they are ultra thin, good sticking power, and can be put on and taken off a few times (to re-position) without loosing tackiness.

As far as them being for kids? I don’t think that is their intention, but for the casual modeler that maybe just wants a replica of their favorite driver’s car, without having to paint the car.

I will withhold judgement of the kits until I have them in my hands. I am sure they will manage to F something up, but I think they will be better than their current kits, which aren’t that bad.

Scott,
Thanks for your insight. I didn’t know a lot of that.

I’ve painted aircraft that had multi colored plastic, and you really need to make sure that you AB on enough primer so that you can’t see any difference in the shade of the primer as that will effect the color coats. Just a royal pain in the butt, and lets be honest about it, most of these kits are directed at us, other wise it would make no sense to keep on pushing the detail and accuracy bar.

I’ve read many a review and post on Nascar modeling sites where the front glass is to small, the tires are like rocks, and the chrome plating is real chrome plating that you can’t remove no matter what.

I have two of their kits, and started the Tim Richmond Pontiac but lost interest in it, and it’s my one Shelf Queen. I’ve got the Hardees car still in shrink wrap gathering dust.

I really don’t have any faith in the Salvino brothers producing the Gen 7 car at anywhere near the level of what Tamiya kits currently are at. Only time will tell, but I’m not holding my breath till it happens, if it does indeed happen.

The multicolored plastic and vinyl markings aren’t geared toward the average modeler.

Since they have the NASCAR license, and their product will be sold with other NASCAR memorabilia at the tracks, and on the NASCAR website, they need a product they can sell to the casual modeler that shows up to the races, and just wants a close replica of their favorite driver’s car. These people for the most part have no interest in painting them to that perfect color. They just want to throw it together, slap the decals/stickers on to have something on their shelf to show off about their favorite driver.

Yes, their chrome is real chrome. I don’t know why they did it that way, but I can only guess that it is so people don’t have to strip the chrome and repaint to try and make it a better chrome. It is real chrome plating, no need to strip and repaint. And they only chromed the parts that were chrome on the actual car, unlike Revell that chromed stuff that didn’t need to be chromed, so you had to strip it to paint it the proper color.

I have pretty much every kit they have produced, nothing wrong with the glass and tires. Your Tim Richmond Pontiac would have the same glass and tires, instead of relying on reviews, just open up your own kit and be the judge for yourself.

There is no Salvino brothers. There is just one Salvino. Rick and Jim are not brothers. At least not biological.

Scott,
The issue about the chrome plating is that it doesn’t glue to the plastic.

As I said I started the Tim Richmond kit but just lost interest in it. The Hardees kit is still shrinked wrapped. As for the windscreen just too many guys have complained about it being undersized and just falls through the opening to not be true.

The attachment points of the chrome parts can be sanded down to bare plastic so it sticks with cement to go where it needs to. Failing wanting to do that, CA works.

Again, you are relying on other people’s experiences, rather than look at the kit you have in the hands. I have the kits as well. The glass is fine.

I do like that ZL1 Camaro. I read that about the being better that Tamiya…mmmmm…dunno bout dat.

Yeah, while I obviously haven’t had my hands on the actual kit, looking at the instructions they were showing off on one of their Sat. morning videos, it looked pretty impressive.

As far as it being like or better than a Tamiya kit…we will see. Sounds like posturing to me, but I won’t pass judgement until I have one in my hands, and start building it.