Found this photo of a white washed sd.kfz 7/2 flak 37
Does anyone know what the approximate date of this photo? 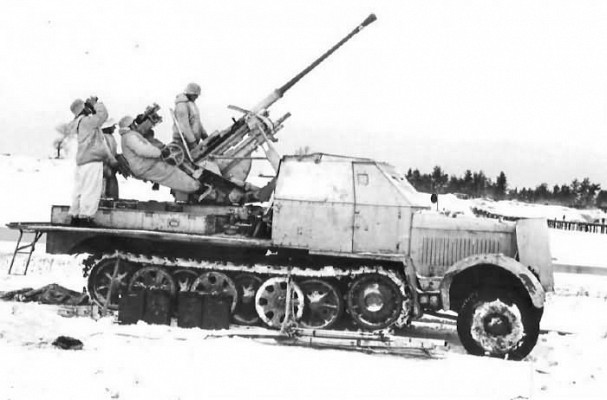 Hard to say, but either 1943 or later, because that is when the armoured cab and radiator cover began to be fitted. The final versions were fitted with the Flak 43, but this is a Flak 37, so best guess is winter 1943-4.

Thanks for your reply.
Only asking to try and see if the base coat was either Dunkelgelb or Dunkelgrau.
Looking at the road wheels it could be Dunkelgrau.

They began rolling out Dunkelgelb in 1943, so the best bet would be Dunkelgelb.

They do look dark, but it’s very difficult to judge from old black and white photos, particularly ones taken in winter which can be quite “contrasty”. I can think of one in particular which shows a Panther which is all white except for around the turret numbers. We know this area has to be Dunkelgelb, but it looks much darker. I think I’d go along with RougePilot, most likely Dunkelgelb.