Just landed a 1/48 Airfix Seafury for my stash. Couple questions. (1) One large drop tank has a blunt nose with window. Strike camera? (2) Kit instructions show a load out of 2X 500 lb bombs or 12(?) 60 lb rockets. Were mixed loads used in Korea? Looks like the bomb rack and 2 rocket rails would fit. (just cuz it fits dont mean it works) Tangential question: Kit comes with both US and UK 500 pounders. I figure the UK bombs of the carrier makes sense. Commonwealth aircraft operating from land bases seem to have used US ordnance. (logical. Operating US aircraft … F-51s … form US bases with US units…) Was it shear logistics or was there compatability issue? When 77Sqn got their Meteor F-8s they used Brit rockets in place of US HVARs . Have a 3 Sqn RAAF Mustang IV on the list. would they have used US or UK bombs?

You may find some answers in these related articles :

or in this forum thread :

AFAIK, the blunt-nosed tank is a drop tank converted into a camera pod (the pictured bomb looks US-made to me…) 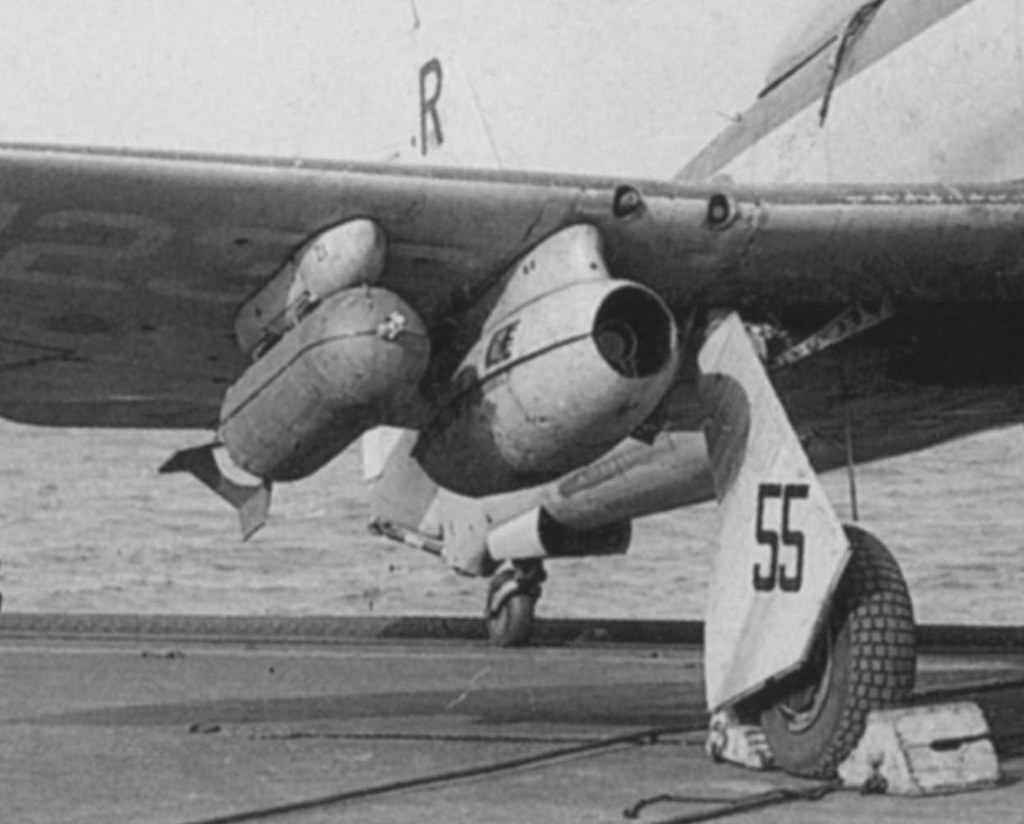 There’s a seam running through the middle of that bomb. Wonder if it’s a napalm cannister?

@sluff please do a build log. It’s a kit I’m in two minds of getting, would love to see what’s in the box and how it goes together.

There’s a seam running through the middle of that bomb. Wonder if it’s a napalm cannister

Napalm bombs were based on various converted drop tanks : 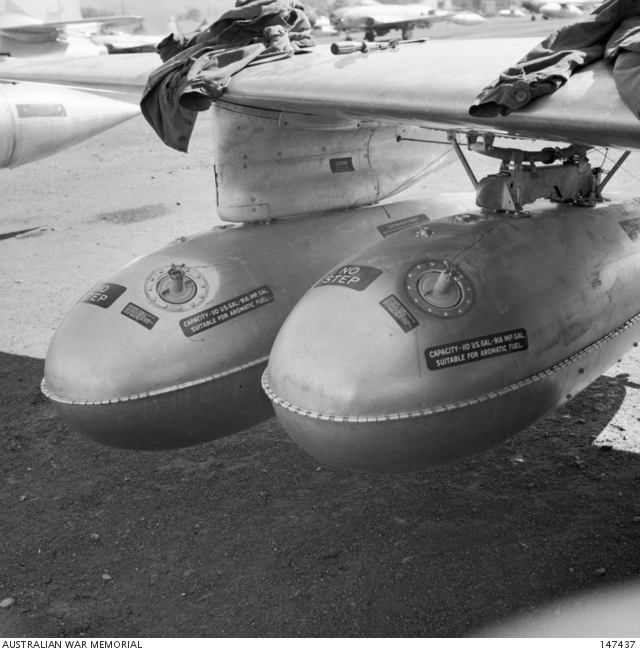 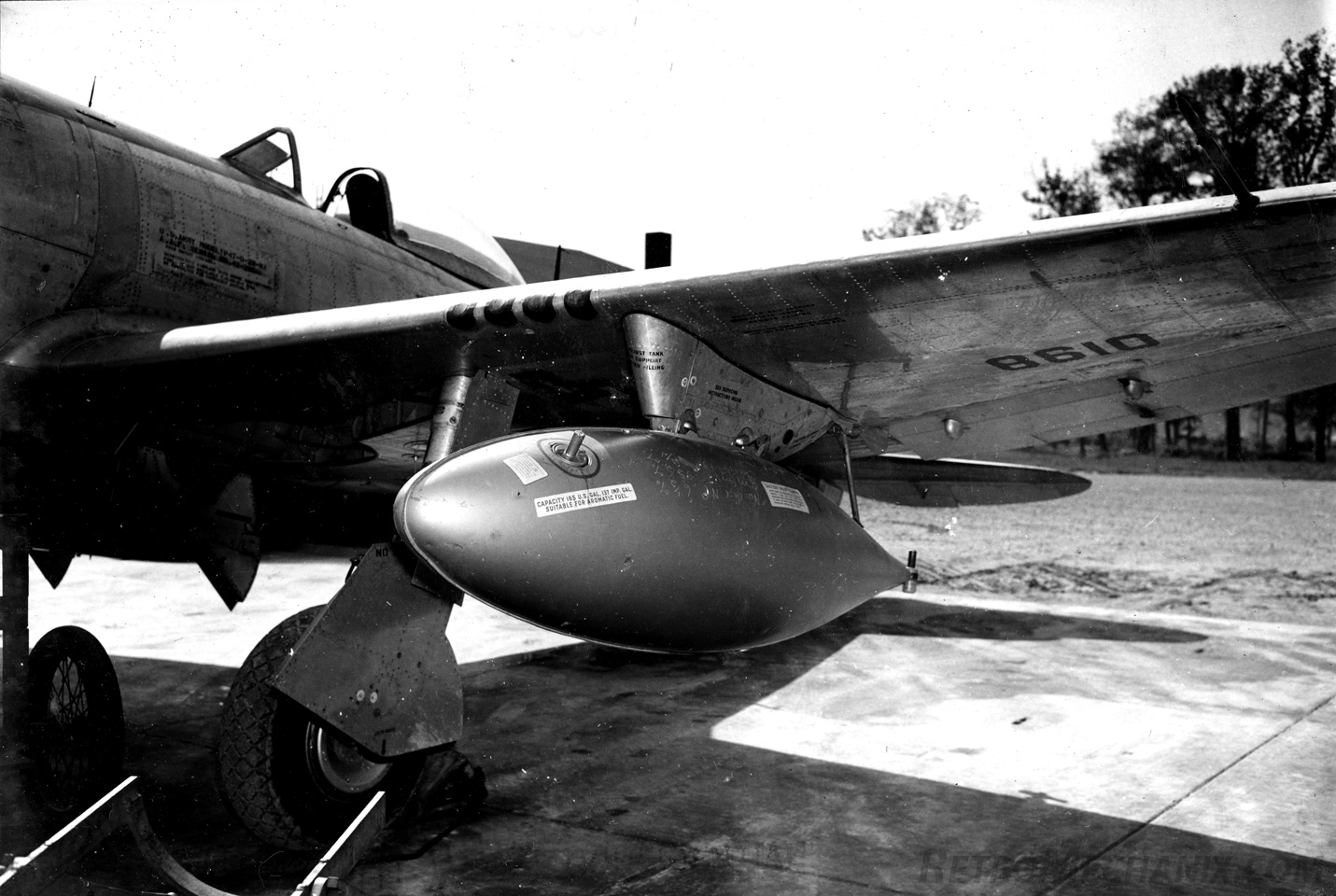 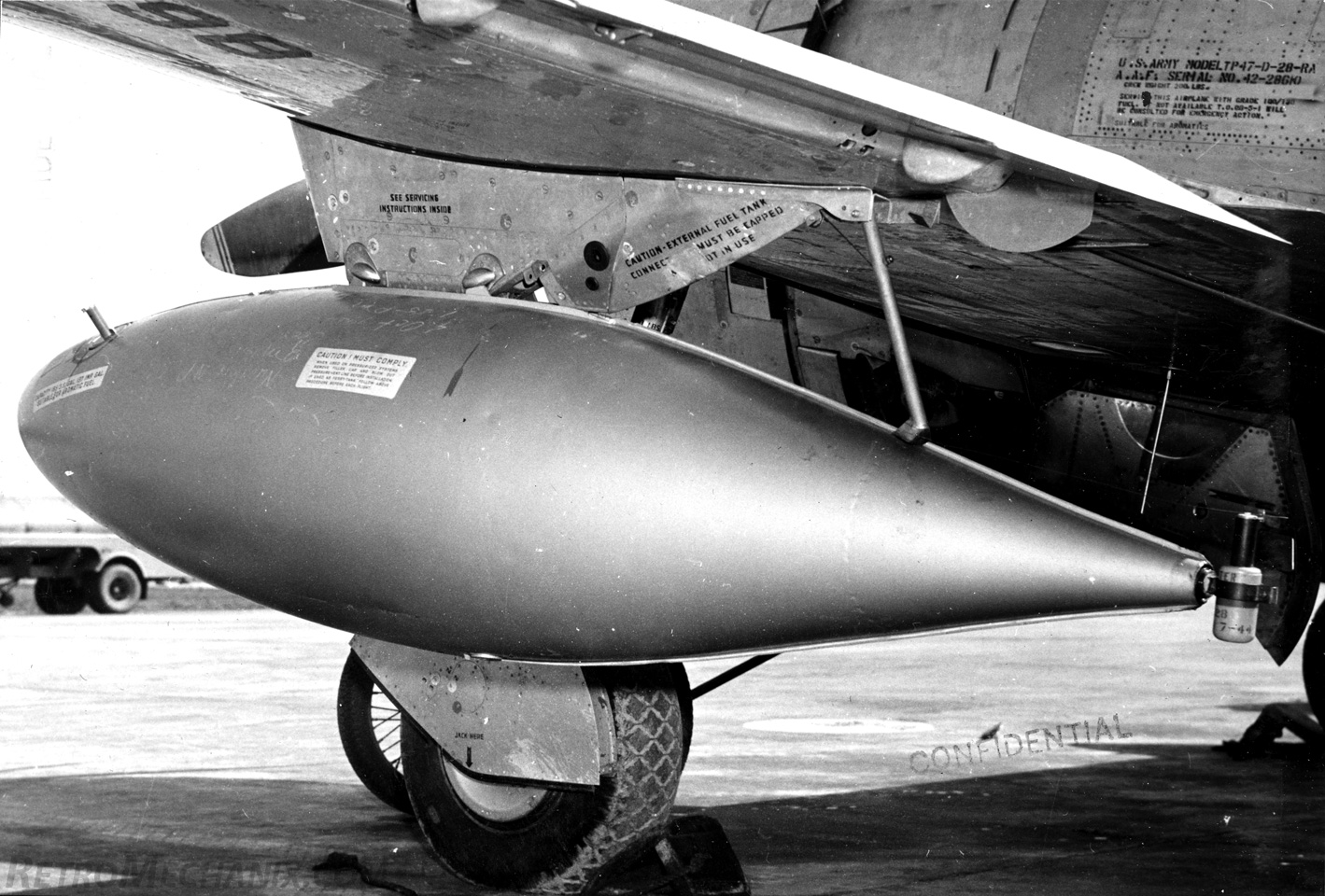 Your right, but those are US WW11. I would assume that by the 50’s, a purpose designed cannister would have been developed. As the shot is on aboard a carrier, my guess is it’s a British development rather than something begged or borrowed from the US. I have to admit, that period between the end of WWII till the early 60’s is a bit of a grey area in my knowledge of ordnance.

I’m just curious as to what exactly it is. While they have US box fins, the shape looks off for an M64. It looks longer and blunter towards the rear, whereas the M64 was tapered (the angle of the photo doesn’t help here). The fins to are vertical and horizontal to the mount, whereas the M64 was at 45° angle.
And there’s that seam? It’s very strange, I’ve never seen anything like it.

Your right, but those are US WW11

Ah, I thought that was a Mustang. Hard to tell when you can’t see the whole thing.
May sound like a silly question, but how can you tell this napalm and not a regular fuel tank? What are the clues to look for?

What are the clues to look for?

Check out this thread :

Duno 'bout the Brits/ Aussies but US used 75 gal drop tanks for nape. painted them yellow, filled them with nape, put a cap with an igniter in it … BBQ is ON!!! 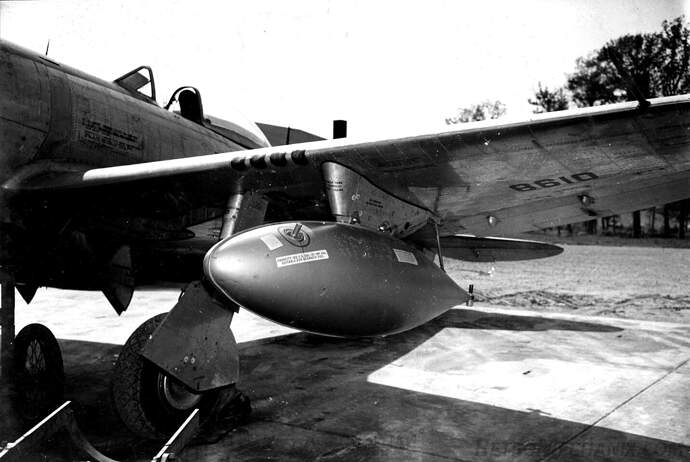 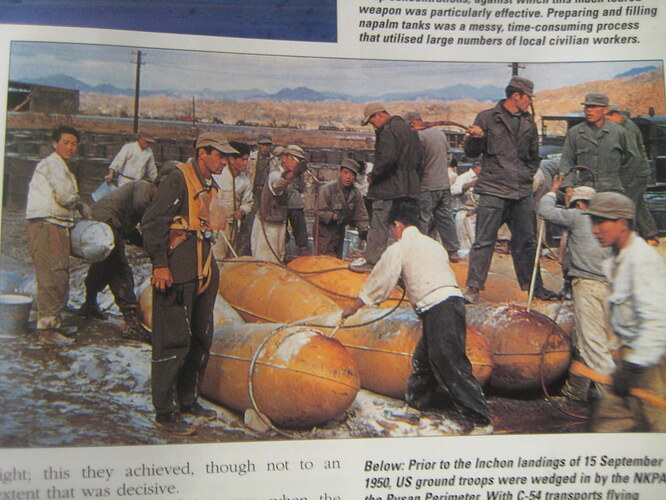 Designed by Lt. R Goldberg… Be an interesting one to build for a kit. 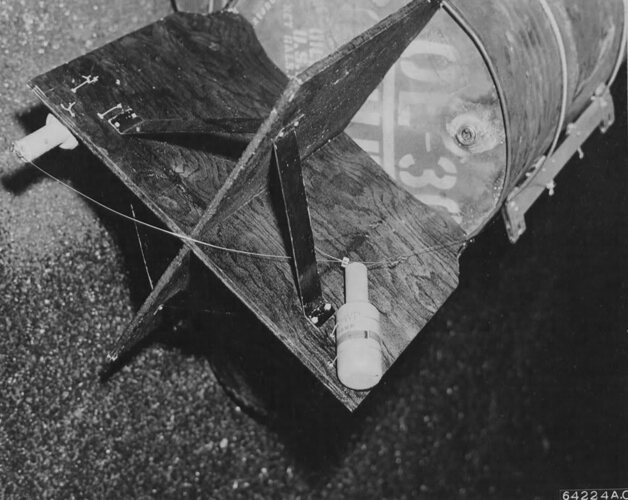 Think purpose designed nape canisters came in late 50s. (?) Think the first was the BLU-1, but not sure the time frame. Ones in Vietnam were BLU-?? series. 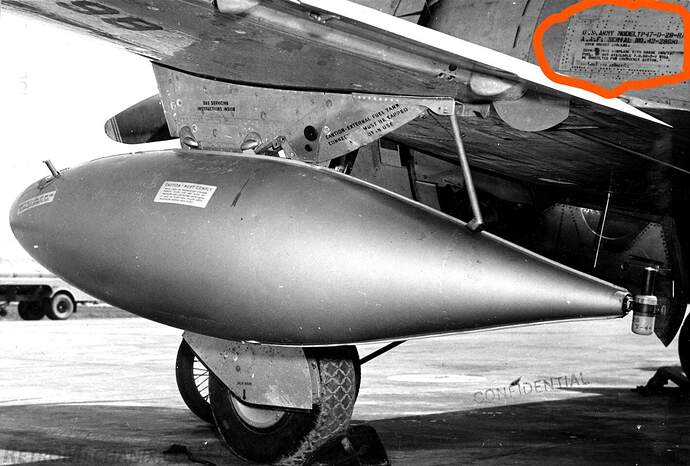 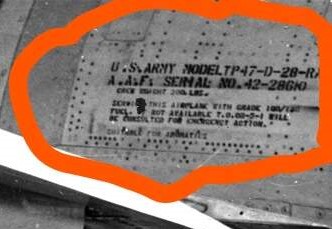 Well … found out the drop tank with a view IS a camera pod. Appears oil from the engine (if it aint leaking, we got problems … its out!) and undercarriage sprayed on the lens of the strike camera mounted in the fuselage. They solved the prob with a modified drop tank. Fromwhat I read most RN sorties were armed recce or artillery spotting. A camera would be handy. The kit one is just the two halves and the window. I jazzed mine up (not that anybody will see it when buttoned up) with a camera scavanged from a 1/48 Airfix Tomahawk II kit. 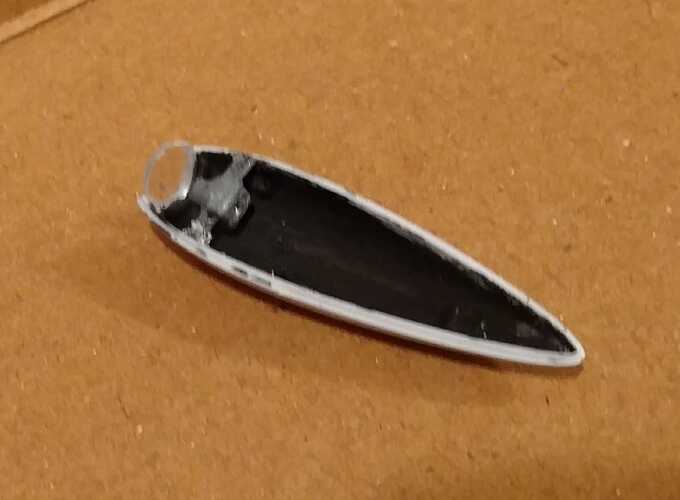 Health and safety noticeably absent back there!

Thanks for the advice guys. Some of those are a bit obvious looking back at it now. The perils of checking posts and commenting when you’re in the pub!