Hi,
I was wondering is there anyone else having problem with getting paid for contribution to Scale Military Modeller International. My article has been published in August 2019 and until now I couldn’t get money.
In the backgroung is change of ownership, Covid. Since August 2020 they ignore me completly. Mark (guy who is responsible for payments) stopped replying to my e-mails.
Editor Andy says that payment is not his job.
Be careful!

Google that magazine and that very question and you’ll get more results than you can imagine.

This has been going on for years with that magazine/editor and there are threads on many forums about it.

Some have kept the pressure on, especially on social media like facebook, and have eventually gotten paid after a lot of aggravation.

There are a few others who drag their feet as well when it comes to payment, none quite as bad as SMMI but close. Feel free to keep harassing him but it may end up being just a hard lesson learned.

There are better editors to write for out there like David Parker of AFV or David Grummitt of Modelcraft.

Sorry to say, but I’ve been writing for that magazine some years ago, and I had nothing but trouble with the payments.
They ALWAYS promise that next time everything will be right, but still I had to keep writing to them, to get my rightfull payments.
Once I wrote about the problems, and called them thiefs, which they were, and then they really spun into action. They even wrote to our own Jim Starkweather, who handled the situation very well, and really helped me out.
So my advice to you all is keep away from that magazine.

This might be a stupid question but did you invoice them? Many businesses (my own included) only pay if they have a matching invoice as it messes up their accounting otherwise.

It would be helpful if publishers all had guidance notes for contributors which pointed this out but it’s years since I’ve written for a commercial mag so I don’t know how widespread it is.

As a general contractor I agree, invoices are not only a necessity for record keeping but also required to get paid.

Having said that, I have written for six different publishers over the last 10-12 years and have never been required to do that in order to get payment.

I have had to sign things a couple times, but those few instances were initiated by the editor.

As I said in my first reply, this is something that has been going on with SAM and Andy Evans for years, if not DECADES. This is an ongoing issue that continues to happen and it isn’t because it falls on the shoulders of a solicited author, that’s not his job, it’s Andy’s.

This is a screenshot from 2012, it is one of many threads on many forums across the internet, saying the same things over and over again. If it was such a simple thing as an invoice, surely the editor would be saying this in every contact with every author, if for no other reason than to avoid countless threads claiming how you are ripping people off… 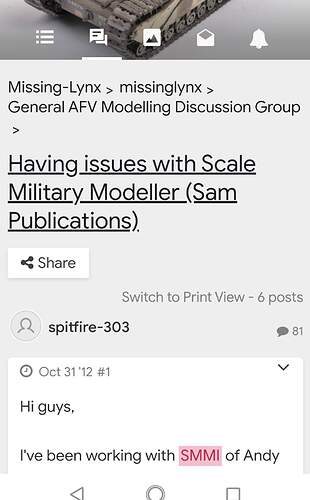 Fair enough. Although considering that it is the same publisher which frequently creates articles by lifting the text wholesale from Wikipedia (the clue is no author attribution), perhaps it’s not something which should surprise us.

So more or less they treat everyone the same. I must say that at the beginning (few years ago) I had no problems getting paid. Now it is a nightmare.