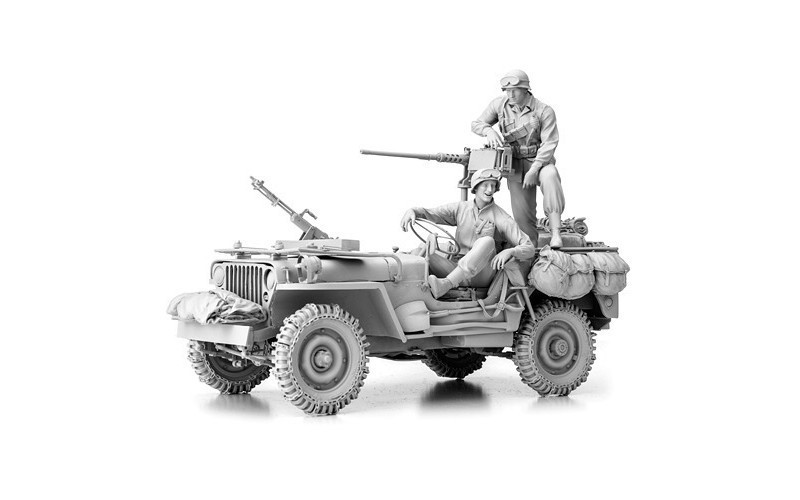 I’ve never seen a BAR mounted like that. The rest looks great.

Are those figures included with the kit?

The BAR mount could be a field modification depending on the unit using the vehicle. If you look at jeeps used in the desert and European theatres by the SAS and other deep penetration units if they can figure a way to mount extra fire power onto a vehicle they generally will. Infantrymen are generally very creative when it comes to making additional fire power available to a vehicle especially if they are involved in hit and run operations.

Moving forward to the eighties I’ve seen armoured recon troops using plywood strapped over the hood of a vehicle so they could mount different weapons from the older 30 cal gpmg, on through the SAW. So realistically just because a picture doesn’t exist it doesn’t necessarily mean that it hasn’t been done to achieve mission objectives.

Chains are a mystery to me, crew is definitely in summer outfit.

I have seen light MGs in a vast array of mounts but a BAR? From the pictures they would’ve had to drill a hole through the hand guard, being careful not to hit the barrel or gas tube. Never say never but it doesn’t seem practical.

Nice subject for those who have deep pockets! I too am scratching my head about the chains with the crew in Summer clothing. Maybe there will be a Korean War crew in the future with regular tires. The BAR was a surprise to me also. But who knows with field mods…

Now give the gunner some riding boots and a digger hat…