Something to think about

Here is something to think about.

Even more to think about. 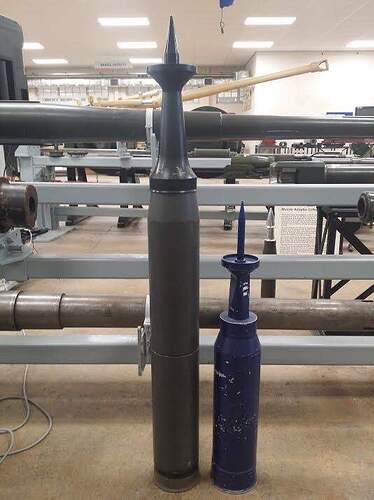 The shorter round is the standard 120mm round.

What are people supposed to be thinking about?

They were thinking about a 130 for the life extension on Chally2 and Rheinmetall produced a test bed… Didn’t go anywhere though. It looked good though.
It’s a good insight about how it would affect turret ammo and the load out you could effectively carry…

Your going to need a bigger turret to flip those 130 rounds and as much as I hate to say it maybe a auto loader but still keep the 4th crewman.

That was partly the reason the UK chinned it off… Plus they found a firm in Belgium who will carry on producing 120mm HESH rounds. Does US armour use HESH ?

No, the US army doesn’t use HESH.

I think the era of the loader is passing and maybe the tank as we are accostomed to it.If this is the direction things are moving, a human loader is impractical. On the surface I am guessing the larger projectile is at least twice the weight of the standard 120mm. The ammo storage would take twice the space. The auto loader will consume space where ever it is located. The guntube would need to be longer to allow the burning time for the additional powder. Tank ranges would need the safety zones increased considerably. We are reaching weight limits now at 70ish tons. What will this bring? Design wise a modified Swedish “S” tank might still work. There has been talk of a drone operator instead of a loader. Think about the new North korean tank, keep the turret mounted missle launcher but use two folding winged drones instead. It just launches them out at flight speed.
As an old tanker I am not for a 3 man crew. Everything is more diffilcult with a 3 person crew. When there is a meeting, there goes the TC you are left with two. Sick call, left with two. First Sgt’s police call detail , left with two. I even remember losing crewman for a week during tank gunnery in Germany for “details” of one thing or another.

I don’t recall the Marines using it but they don’t use any tank round anymore so mute point I guess.

Ha! I guess I am losing my standing to complain.

Your points where the same as mine for not wanting a three man tank. Where does the FO/FAC go? That’s one guy pulling all the crap work. Sucks for him or would or did. I don’t know anymore.

Greg, the French (Leclerc) and the Russians (T-64 onwards) both have 3 man crews and presumably can make unit dynamics work with the fewer numbers; ’ might be interesting to garner their thoughts . Perhaps Olivier (Bison126) could give a French perspective for a start though I’m not sure if he has an armoured background.

Thinking on a little bit further (unusual for me) perhaps John could also comment (Johnnych01) as British Armoured Recce units would operate with 3 man crews - Saladin - probably still in living memory - and CVR(T).

You just combine crews in the motor pool but less gets done.

From a tank side and Recce side I have opinions about both … I have never thought an auto loader is good. And a tank 4 man crew covers all your options and needs. To take a man away and replace it with an AL doesn’t suit everyone and there can be to many issues as the early Soviet ones showed.
Also, when a main gun mechanism goes down, there are usually a pretty straightforward set of procedures to fault find and get it going again. And if the loader becomes injured, the main gun can still fired and the vehicle is still effective in its primary role. Thankfully the UK military powers that be have stayed far away from an auto loader.
And with those, the whole system becomes more complicated in operation if it breaks I can sense repairs to an auto loader are not an easy fix, and then your wagon just becomes a 70 ton armoured mobile bunker.
CVRTs again are just designed for that sole purpose. Recce. Small manoeuvrable, low profile, fast and only designed for 3 to operate it …(in my opinion it is and always will be the best Recce vehicle in the world).

The other deciding factor is money… Someone, somewhere is always trying to redesign something to save money by saying what they are offering you is far better… Not always the case…

John, thanks; I just wonder further not so much from a technical point of view (re the qualities of an autoloader etc) as much as the human aspects; ie how does the tasking pan out when operating with a 3 man crew as opposed to a 4 man one? What are the merits - if any - of a 3 man one, or, will that always mean overstretch with everyone ending up fatigued (or even tasks ignored)?

I imagine that a Commander still has to attend O Groups, a Driver to undertake maintenance and a Gunner to service the weapons, and the Loader/Operator to bomb up etc (ie that is in a 4 man crew), let alone stags (periods of duty). The French, who are nobody’s fools, must make the system work within their military. I just wondered how it all panned out from your experiences. - not least as you’ve worked on MBTs (4 x) as well as Recce (3 x).

This does make sense because future tanks (FMBTs) will have the crew sit in the hull just like the Russian T-14 “Armata.” Thus, the turret is unmanned and can house the larger tank shells and the autoloader. The need for four crew in the tank is relative…sure, if the hull capsule can fit four across, or two front and two back, then “Go for it,” but tanks will be more autonomous with the turret being unmanned.

I believe an unmanned turret makes sense for all the senors, protection, armament, Active-Defense, etc. housed in it. A designer might even add some SHORAD missiles in the turret for UAV and air defense protection.

It’s a very tricky and complex area, but I’m happy to give my thoughts on it from what I know, knew, heard of and was briefed on during my career.
The UK has never thought seriously about an auto loader. It’s doctrine dictated a set number of tanks crewed by a set number of men to achieve combat functionality and effectiveness. This was a 4 man crew. Outside of combat the Commander will be away on an O group or when with the crew, he will chip in wherever he is needed. Loader is doing his bits plus the radio side of things and feeding the crew. Dvr and gnr are on stag on the ground once their role jobs are done. CVRT is similar except you only have 3 as now the Comd is doubling as loader due to the nature of the role.
If not mounted doing the Recce role, I could still be doing the Recce role on foot with CTRs etc. So I would go from my crew, and then take 2 other bods from 2 of the other wagons in the troop. While I was gone, everyone else in the troop would maintain Comms and close protection to the 4 stationery wagons in a battle hide.
Back to MBT - totally different role and scenario 99% was mounted armoured warfare ( in BAOR that was defensive and withdrawal) the wagons were designed for survivability and based on a crew of 4 and to make use of limited numbers… The Soviet way was different, theirs was attack and manoeuvre. They wanted a low silhouette, quick tank but with the big main gun, this had to be redesigned and the auto loader popped up, reducing the crew to 3. Back then, them losing 30 , 60 or a 100 tanks was acceptable as they had the number superiority over NATO in BAOR.
I am not sure to the reasoning behind the French going with the auto loader, I know they had limited numbers and less of a foothold in the then W Germany as part of NATO, so that may of been something to do with them going down that route.

As to tanks ? Tricky. I think the tank as we know it is on a limited time frame. As it stands Chally 2 will be the last MBT fielded by the UK, as they are now looking at fast strike mobility Brigades and that will start with the new Ajax family, and the size of that is akin to a medium sized tank, so even the Recce element is slowing fading away as an Ajax variant is rerolled as a tactical surveillance platform.

More and more technology is being incorporated into tanks, surveillance, multiple defensive measures and suites such as trophy etc and they are only there because of all the SMART battlefield weapon platforms which are constantly being developed. And a crew can only do so much at one time. Who monitors all this ? The Comd, gunner , loader ?
Some countries will always have MBTs such as US, Russia , China, probably Germany and Israel. I think if the UK does back track and get another tank after Chally2 it will be a lease build of M1A2 or Leo 2 (which they should of done initial ly) and their next gen of tanks.

Thanks John, all very insightful.

When the TC’s position moves to the hull, he must rely on sencers/ TV for battlefield situational awareness. The look around is gone. So…why does he have to be onboard? The same with the gunner. They could be located somewhere else. You would only need to have someone board to un-stick the tank and get it out of the mud that you couldn’t identify through a TV screen.

I worry about the trade off of not having the TC with a view out of an elevated position.

Sensors: cameras giving a full and unobstructed 360 degree view of the battlefield.
When you turn your head or move your eyes you get the same view as if you were standing up in an open hatch. At least the driver and TC gets the full 360, optional for loader and gunner depending on what they are currently doing.