Anybody have any pointers on the purple used on the rudders of Spanish Republican aircraft? I found a reference of FS27144, but not finding a cross refence to any model line. Vallejo 70.959 purple, 70.810 Royal Purple , and 70.690 violet look like options but hard to tell on a monitor. Would like some opinions afore I waste money buying the wrong color . (which I only have the need enough for 1/3 of one 1/48 scale rudder to begin with).

Gracias. Not much help though. Dont need the camo colors. Need the one for the rudder. 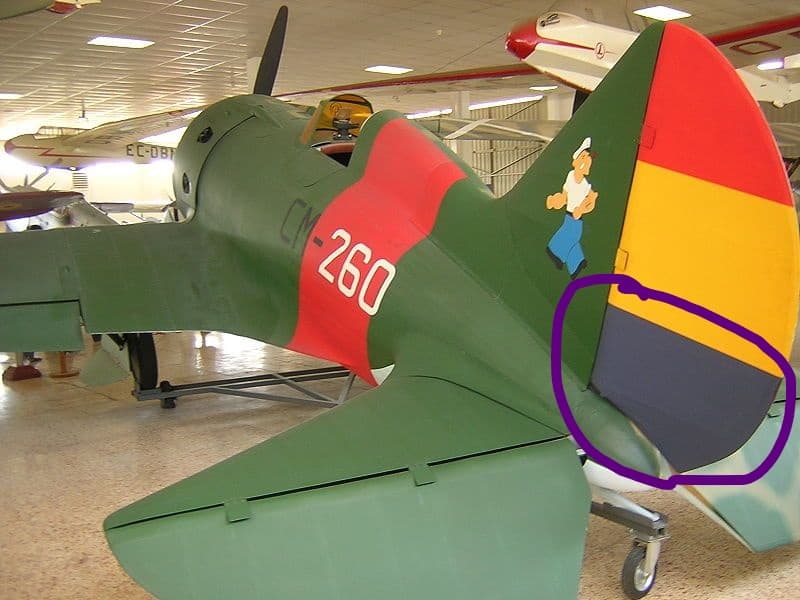 Yep, I realized once I published the link. Sorry…

No problema. (one does not live in Southern California for 26 years and not pick up a little bastardized Espanol.

I have found this one in a spanish forum dedicated to the ‘Guerra Civíl’. It’s an old post (from 2007) and there are no pictures already, but the text (I put what you need in bold text)

He talk about Humbrol nr.68, so maybe you can find any matcv in other brands.

I am no expert on this field, but I would say that such colors were not standarized, even more considering that these aircraft arrived once the war had started.

Looking at flags and modern photos, in my opinion 70.810 Royal Purple would be fine, but the other two should be valid as well.

Looking at flags and modern photos, in my opinion 70.810 Royal Purple would be fine, but the other two should be valid as well.

Eduard says MrColor H39 which converts to 810. Not that Eduard is the end all be all on color but they agree with you.

Thanks All. Royal Purple sounds appropriate. Republicans were royalists after all. I tried mixing my own but ended up with a weird greyish color , kinda like RLM Violet grau.

I’ll post pics when finished. (waiting for parts (a part), decals & , now that I know what to order, paint.

What I’ve got done so far looks decent. Gonna be a “what-if” Republican Spitfire Mk I. Waiting for the flat (initial) hood (kit has later bulged top and full blown options) and decals, and have to order the purple. Fact: Portugal expressed interest in the Spit. What if… the Brits sent a flight of them to Portugal for evaluation? Or to help protect Portuguese neutrality. While there they “strayed” into Republican air space, are “intercepted” and “seized”. Of course the British Govt. “strongly protests”, but … Remarked in Republican markings are “pressed” in to service to help counter Legion Kondor’s BF-109s. Before the fall of Republican forces Spanish pilots flee to France and the aircraft eventually returned to the U.K. (Tell me the devious mind of Churchill didn’t, at the very least, ponder such an option.)

Well… It’s getting there. Bit of touch up and some light weathering. (Spain was dusty.) 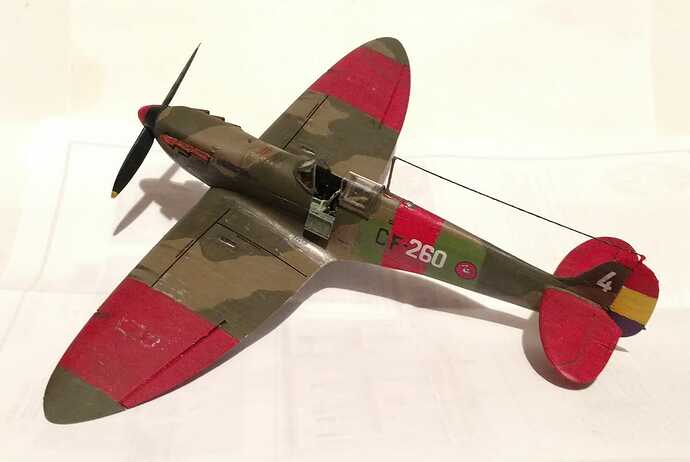 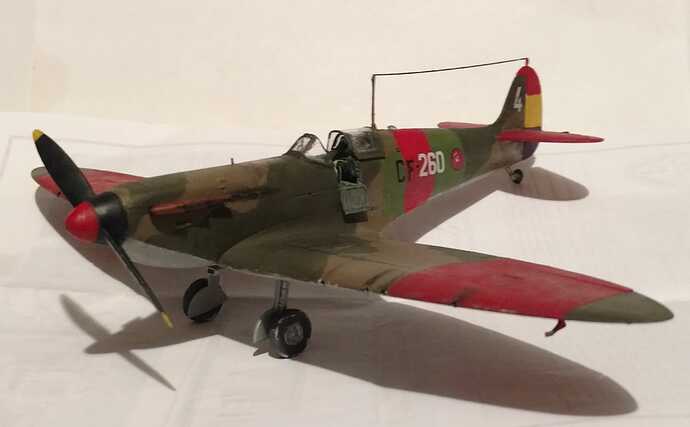 Finally finished! A what- if with wings. A flight of fancy. 1/48 Airfix Spitfire Mk I. Republican Spanish Air Force. Aug.1938. Despite British Govt. neutrality (as I understand it England had no use for Republicans or Nationalists.), hawkish elements of the British leadership manage to “arrange” the Republican “seizure” of a hand full of initial production Spitfires bound for trials in Portugal. After painting over RAF markings and applying Republican markings they were pressed into service (providing a convenient evaluation.) against Nationalist/ Kondor Legion Messerschmitt ME-109s (A,B,D and E-1/E-3s were in country). Shortly before the fall of the Republican Govt. in March 1939, Spanish pilots fled to France with the aircraft, seeking asylum. The French returning the aircraft to their “rightful” owner. Aircraft has original 2 blade Aero-Products “Watts” wooden propeller, flat (top and sides) canopy, and ring& bead gun sight. RAF markings were over painted with Soviet paints (Soviets provided most Republican aircraft. green on fuselage, blue under wings) and Republican Red bands and tri color rudder applied. “CF” code was used for foreign aircraft pressed into service. (The I-16s were coded CM … Caza Mosca … “Fighter Fly”, Mosca being the Republican nick name for the I-16. CF could have been Caza Fuego … Fighter Fire.) 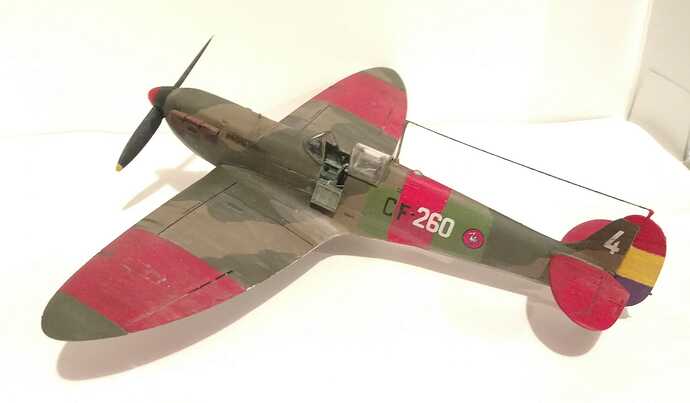 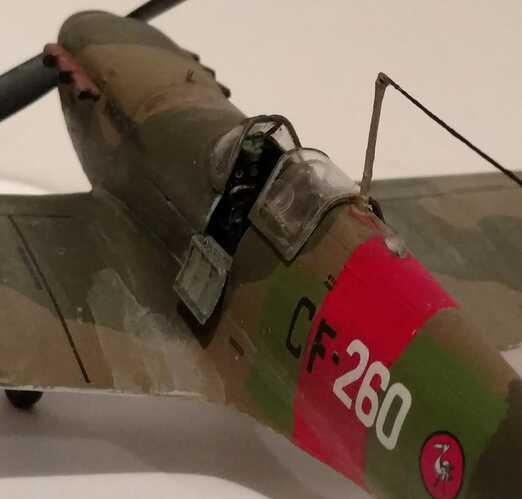 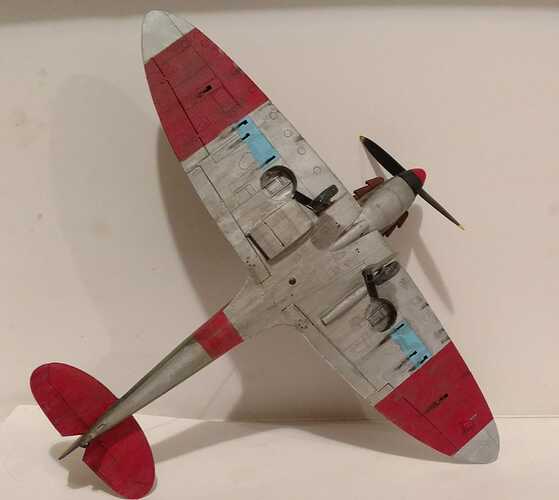