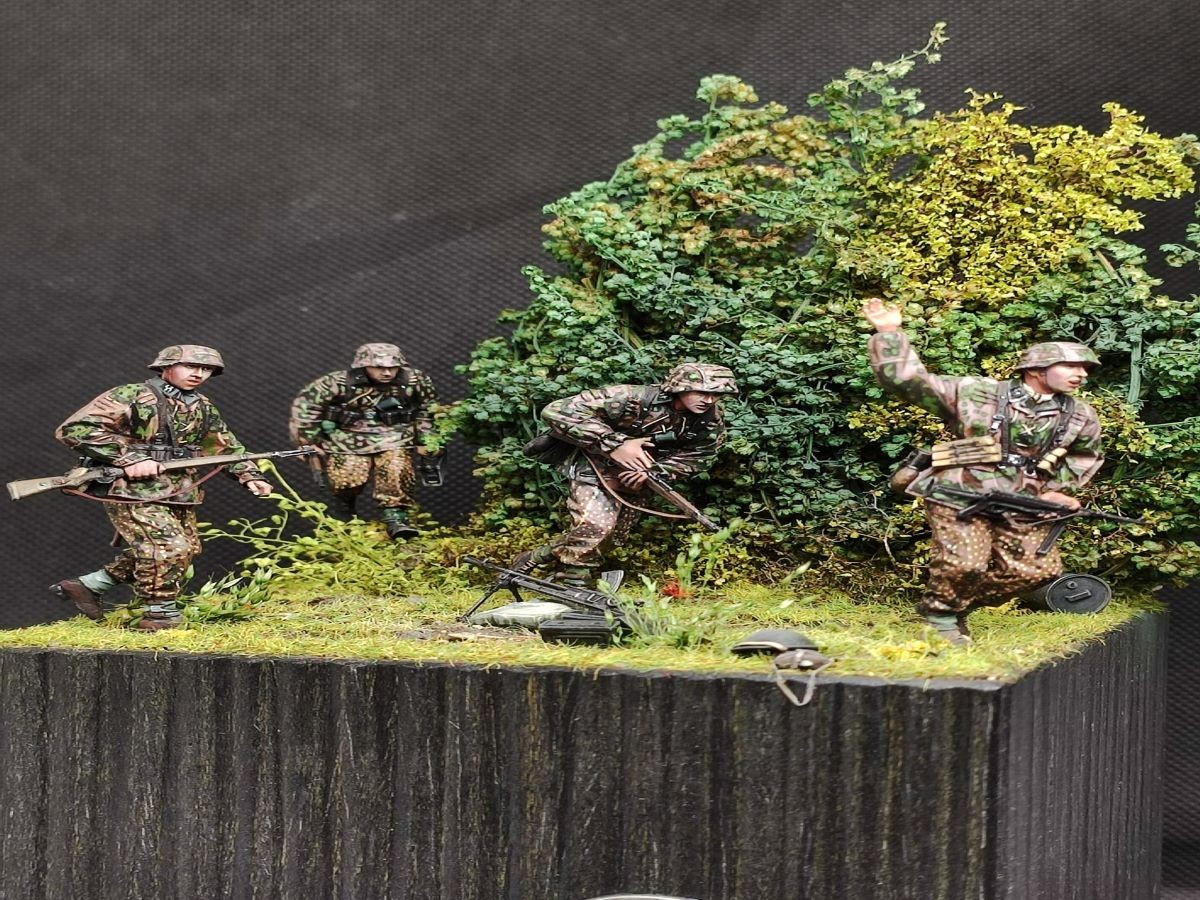 This is partial text from the full article (usually with photos) at https://armorama.com/news/ss-totenkopf
4 Likes
Floridabucco October 24, 2022, 10:36pm #2

I thought the 3rd SS Division was never deployed to the west in the latter part of the war?

When I espied the Bren gun and the Brit helmet I thought just that too, but I think the modeller is using the word “Totenkopf” to sort of represent the Waffen SS in general; certainly he hasn’t, as far as my aged eyes can see, given his figures the characteristic Totenkopf emblem on their collars.

So, if one removes the preconception that this is anything to do with the 3rd SS Division, and just reviews it as Waffen SS in western Europe/say Normandy, 1944, then we’re probably in business!

The issues I have is that the discarded pack is not a British one, and the water bottle on a single strap is unlikely – though to be honest you’d have to be a bit of a Brit webbing Ninja to know that. The ammo cans are not of the type that contained Bren gun magazines. Apart from that, I love the foliage and only wish I could finish figures to that degree of excellence. Superb painting.

Yes, I can see your point about representing the entirety of the Waffen SS, I guess in my mind I put the two of them together.

Those few issues aside, I think the figures themselves are masterfully painted- the camo schemes are precise and the shades and tones are spot on. The posing is dynamic too- you can believe the movement of the unit in the way they’ve been placed.

Yeah that pack looks like a US pack as well as the ammo can as near as I can tell. Still a beautiful job.
Brian I thought those British canteens only had one strap?

The canteen (water bottle) is normally part of the whole webbing assembly used by the Brits. It would be attached to the ends of the cross straps and be positioned on the right hip. If, if, for whatever reason one wished to lug along a water bottle on it’s own, it could be attached to a single cross strap and carried slung wherever; so being merciful to the modeller, who may not be well-versed in much of this at all, one could, just about, find a discarded water bottle thus.

Very nice work indeed. Aside from the slight US/British equipment missmatch I would suggest to paint also the bayonet frog ang straps on canteen and waterbottle black. Also the straps that hold the bayonet tied to the field spade should have the same colour as the field spade pouch, since they are one piece.

“Totenkopf” is German for “death’s head” or skull and typically refers to a skull-and-crossbones image. During the Nazi era, Hitler’s Schutzstaffel (SS) adopted one particular Totenkopf image as a symbol.

I believe the 3rd panzer division (Totenkopf) DID serve in Holland and France at the begging of WW2. But I can’t vouch for the validity of the uniforms camo from that early in the war.

That being said, the MG, canteen and other weapons were totally ok. I feel that IF this was a later in the war depiction, the leader wouldn’t be using the MP40, but one of the newer Sturmewehr

I think the camouflage, and the figure painting are a heck of a lot better that I could have done.

Guys, I think we’ve generally agreed that the modeller wasn’t stating that his display represented 3rd SS, but he was using the Death’s Head symbol/nomenclature to establish the SS in general.

Really good work on the entire project. I was under the opinion Armorama to be first and foremost a model making platform and not a history lesson. So with this in mind, I will reiterate…really good work.

Excellent work - BUT - I would replace the Brit items with Soviet ones,
the Totenkopf Division actually had a regiment which wore the “seigrunes”
the “Theodore Eiche” Regiment which was established in 1943.

Chart of SS division names, numbers and insignia. Totenkopf (Death’s Head) was #3.
Click on the division name for more info such as areas deployed.

Outstanding work ! Top notch figures with great movement and excellent foliage ! Aside from a couple “technical difficulties” this is one of the best diorama I’ve seen in 2022 !
Thanks for posting this excellent effort !

The added information is helpful for suggested alterations, but I cannot fault the work itself.