The construction of the Stalin Line fortifications began in 1928. After the annexation of Poland in 1939, the Stalin Line was largely stripped of materials to supply the Molotov Line along the former Polish border. At the onset of Operation Barbarossa on June 22, 1941, many of the Stalin Line positions lacked weapons, ammunition, personnel, minefields and camouflage.

This diorama depicts a somewhat-fictionalized assault by the 1st Gebirgsjäger Division on a position in the Letychiv Fortified District, Ukraine. Aided by early morning fog and disorganized Soviet defenses, the Assault Engineer Detachment infiltrated deep behind the enemy lines. Their final approach is masked by the noise of the large ventilator located between the BT-2 turret bunker and the OT-26 flame-thrower turret. Their surprise is complete. 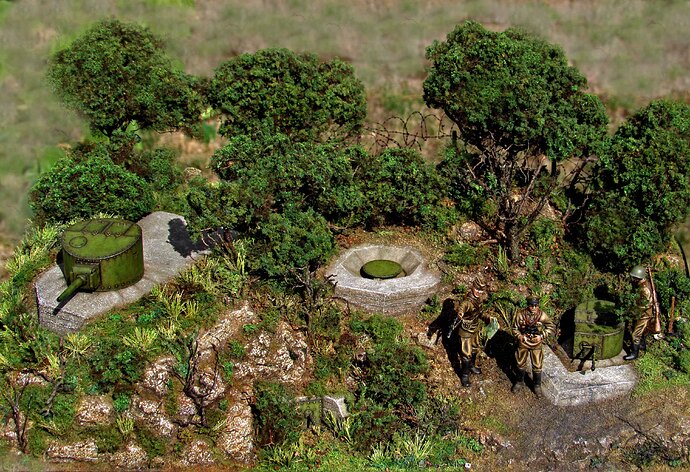 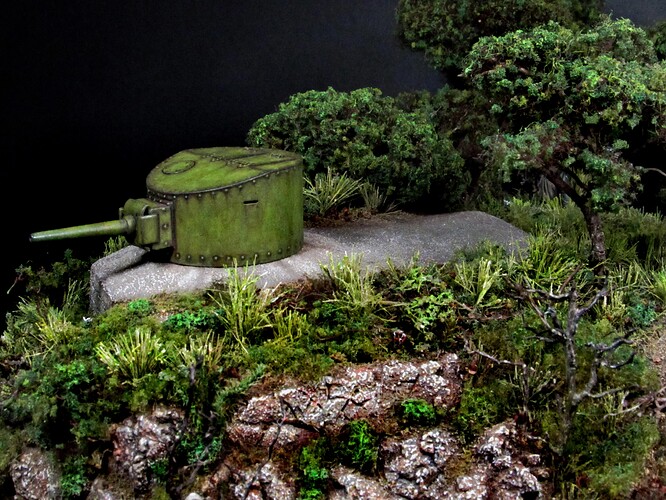 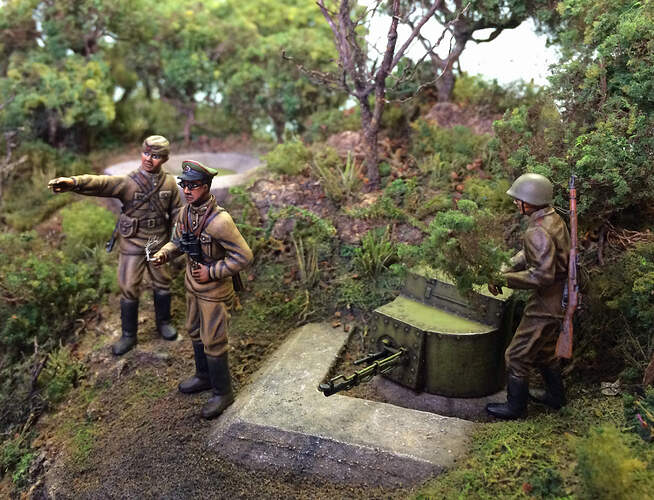 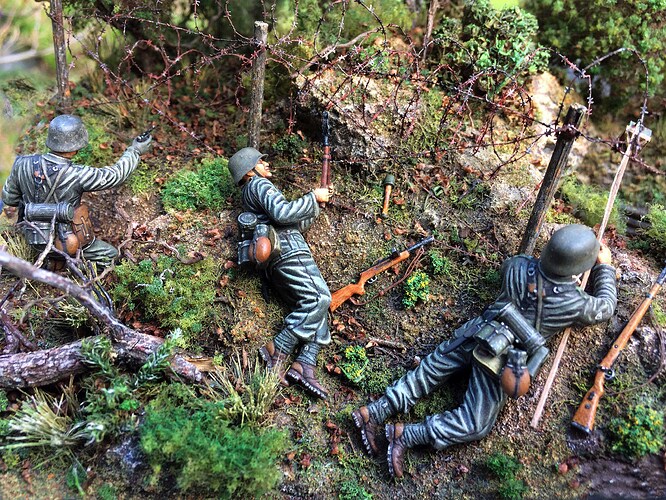 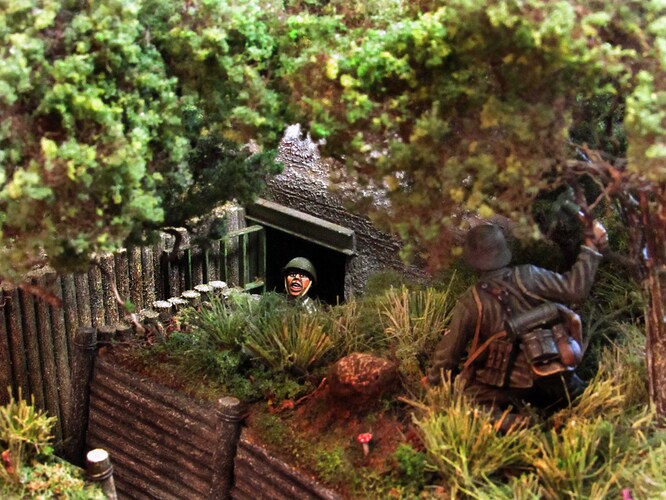 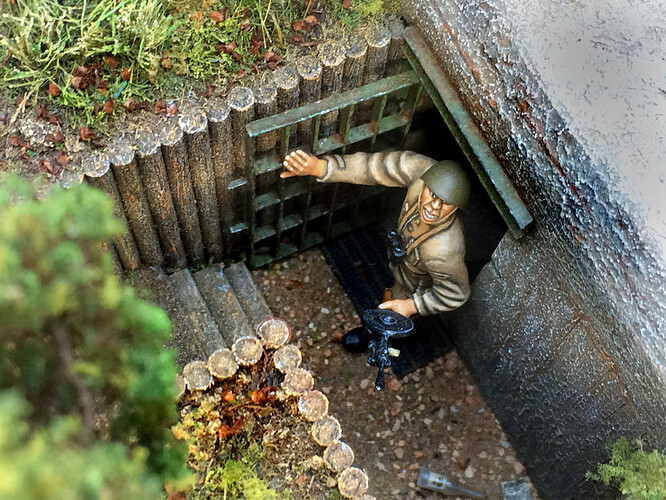 very nice work! I can only dream of painting figures as good as you do Sir!
gary

Nice. What make are the figures?

Thanks for the comments everyone!

The Gebirgsjäger figures are Dragon Gebirgspioniere Metaxas Line 1941, # 6538, and the Soviet figures are modified Miniart Soviet infantry #35108. The turrets and ventilator are from the RPM Stalin Line kit #35009. I used the kit’s vacu-formed base as a mold and cast the foundation of the OT-26 turret and ventilator out of plaster. I enlarged the BT-2 turret bunker, using the front-end of the vacu-formed base as a start, then scratched the rest of the bunker. I actually scratched a partially-finished interior, with an inner door, MG loop and radio room, but I didn’t finish it. The trenches are lined with several dozen bamboo BBQ skewers carefully cut and fitted, tedious, but easier to do than using ordinary twigs. I have serious reservations about the BT turret, I can not find anything that actually fits this particular roof configuration with the double-hatches and lack of the side-mounted MG. I write it off as artistic license and the lack of extensive photo coverage of these vehicles to begin with… 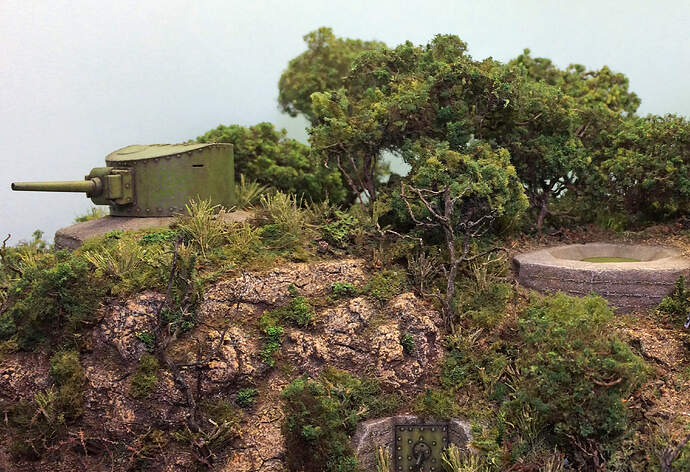 I especially like the guy cutting the wire! Great attention to detail! Outstanding!

what paints did you use for the German and Russian figures?

Thanks again, I appreciate the feedback.

Paint?..Short answer; everything! Mainly Model Master acrylics and Vallejo, mixed with a bit of Golden Acrylic Retarder for blending as a base, Golden Acrylics Transparent colors as washes and finishing up with W&N oils.
I was proud to receive this mention on Shapeways 3-D Modeling site;
https://www.shapeways.com/blog/archives/30777-8-incredible-scale-models-ipms-spring-show-seattle.html

This diorama is difficult to photograph due to all the foliage in the way. Since these fortifications were basically abandoned for a decade, I wanted to depict them as somewhat overgrown with bushes and small trees. A few more images of the site, officers and the Pioniere; 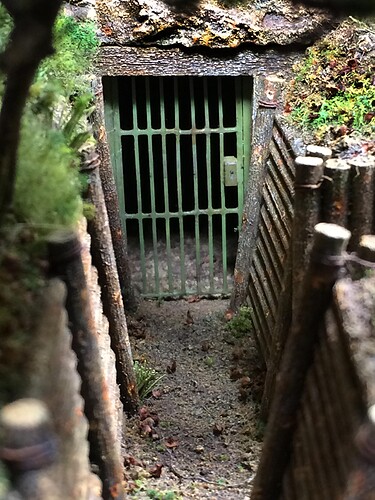 The gated entrance to the OT-26 turret and underground galleries, about to be blown off by a pole charge by this guy; 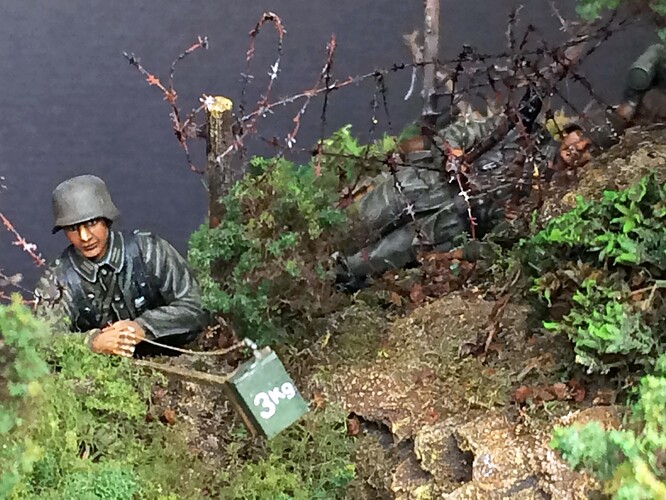 Another shot of the officers; 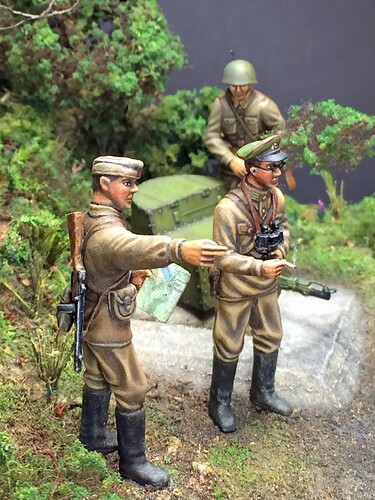 And the backsides of the Pioniere; 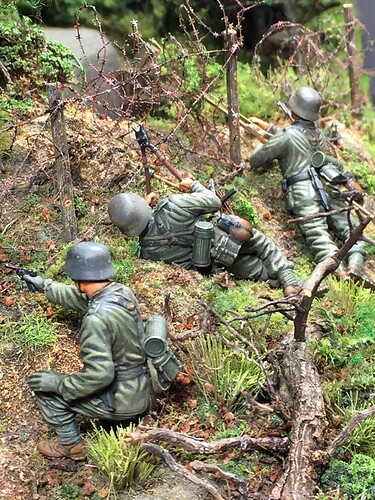 A cut-away drawing I used for the BT-2 bunker, shown here with a T-26 turret. I also added the radio antenna after these photos were taken; 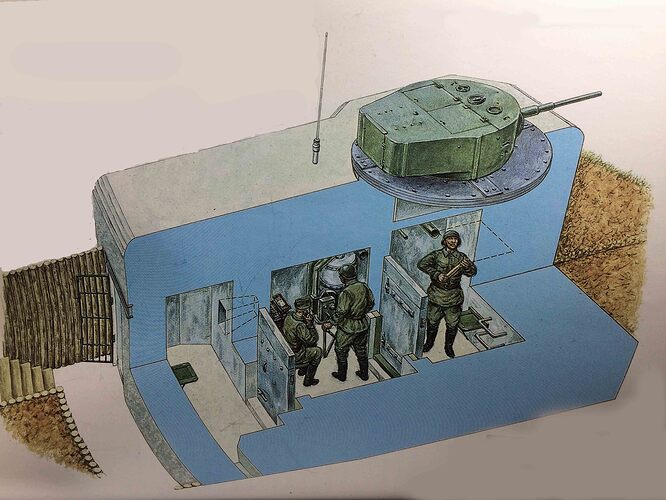 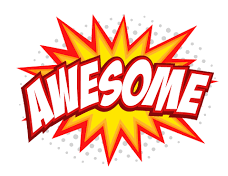 Excellent detail adding the steel wire to the vertical poles .

Holy…brilliant diorama, some of the best landscaping I’ve seen and max points for unusual & dynamic subject. What a beauty, well done