I saw a rare photo of a Stug IV with a (locally made?) dozer blade to clear streets from rubble.
Dozerblade is scratchbuild and some gismo is used for the connection and adjustment taking the (very blurred) photo as a reference. Housing (a little modified and broken down pieces added) is from RT-Diorama, and additional rubble is home made from the toilet filling from my son’s cat painted in 3 colors with thinned with oils.
Hope you like it 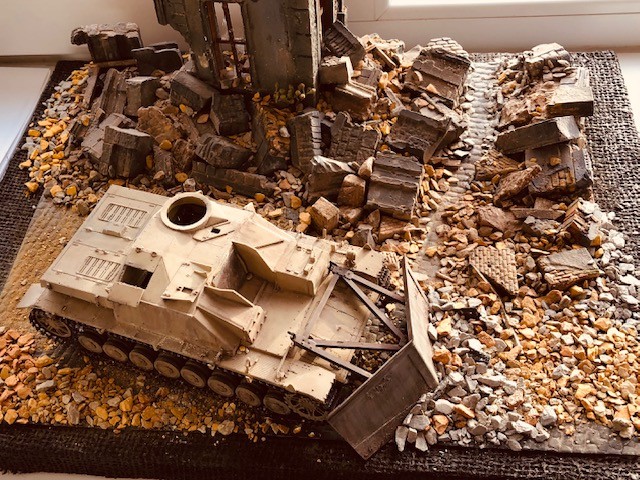 Edited to add the photo until Modelfan can get privileges to do so himself.

Very nice and original scene, by the way

I saw a rare photo of a Stug IV with a (locally made?) dozer blade to clear streets from rubble.

It was modified by the Krupp-Gruson Werke A.G assembly plant in Magdeburg that housed the production line of StuG IVs.

taking the (very blurred) photo as a reference. 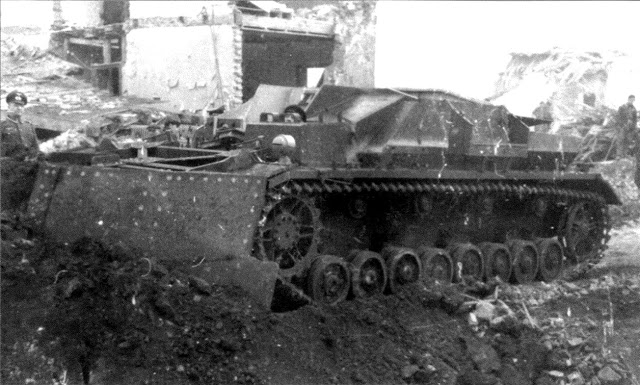 This one seems to be equipped with a slightly different blade design. 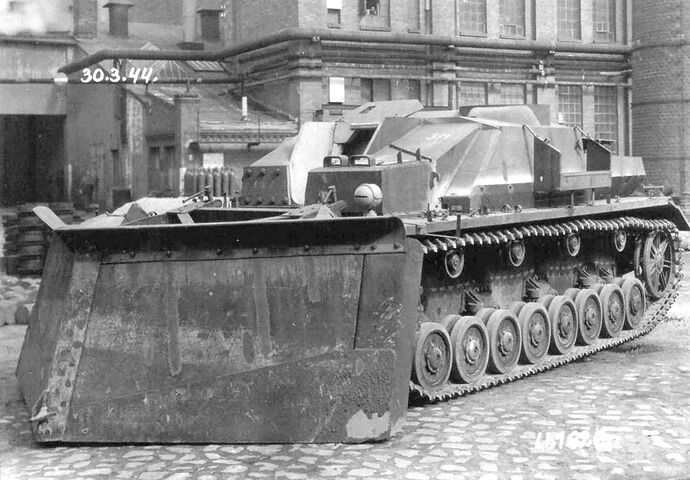 The second photo is the one I was working of. 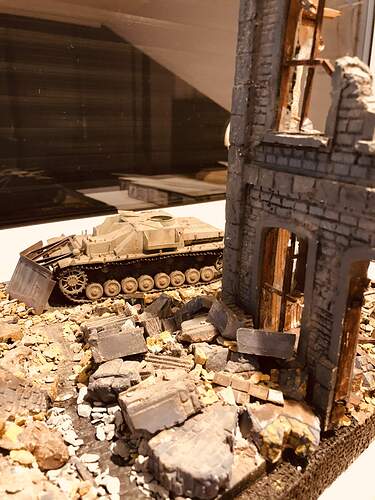 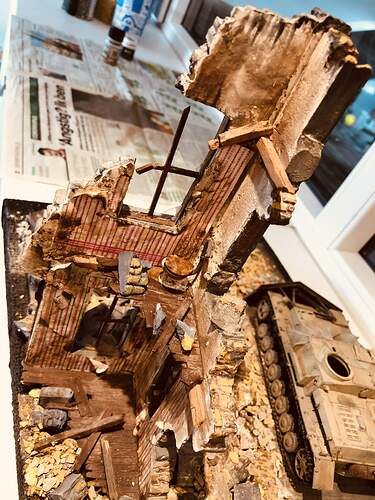 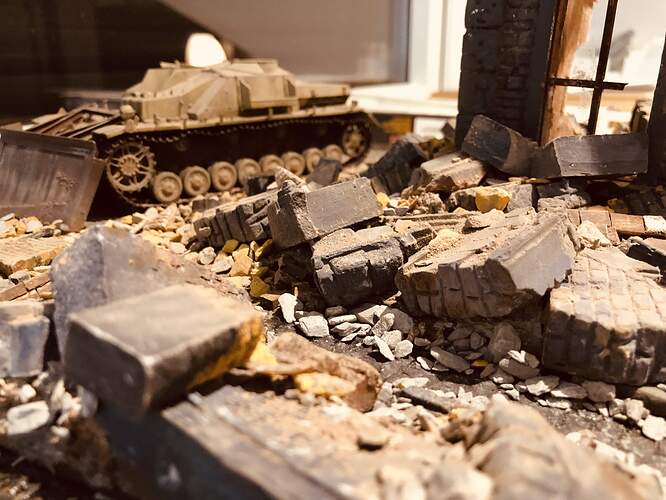 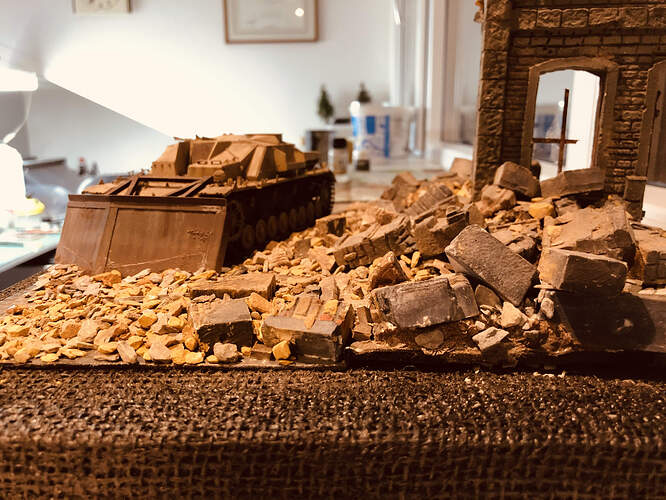 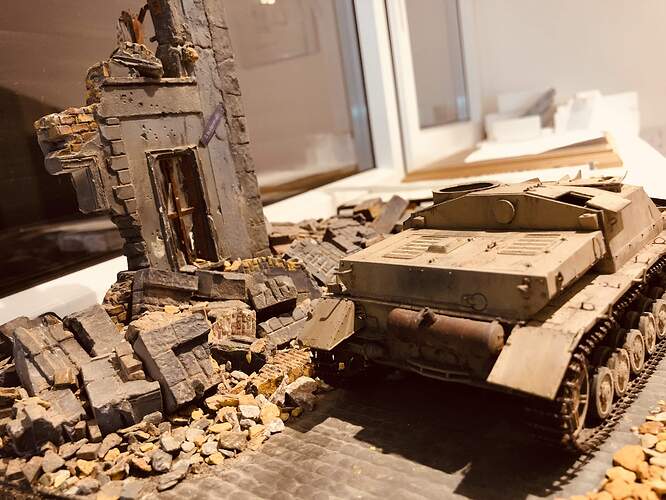 Were these done after the war to clear the rubble? Seems during the war Germany wouldn’t have been able to spare too many tanks for such an activity.

Look at the date of the second photo in my post - it’s March 44. The assumption is that this vehicle (or perhaps more than one) could not be put back to service in its intended role therefore it was converted to a dozer and used to clear rubble after allied bombings.

Ah, okay. I was glancing at everything during my lunch break and missed that.

For me the Stug in the 2 photos is the same, only the upper edge and 2 side plates have been added to the blade, all 2 have a handwritten number on the hull in white in exactly the same place above the driver … all the details are exactly the same, a bit strange for a One-Off

For me they bombed the factory and needed to clear out the debris right away and put together the blade from the first photo, then they noticed a couple of flows in the design and made those additions, the second picture is definitely in front of a industrial plant

Yeah, the building and rubble look very good to me. The kitbashed parts on the Stug look great also.

Really nice work on the dozer. And the work you’ve put into the rubble is truly admirable.

Super cool diorama and a unique vehicle build. I’m so going to build one as well.

PROPS on an interesting subject!

Never saw the first photo. In my opinion it was an attempt to clear debris (factory or street) , but the date puzzeld me. This shoul place it after the war, but, in my humble opinion, Allies and Russians did not favor such a project. The first blade is reallie different. To do is adding a figure and up to the Panther.

Thanks everybody for the nice comments.

Maybe you could consider some factory workers in civilian dress? 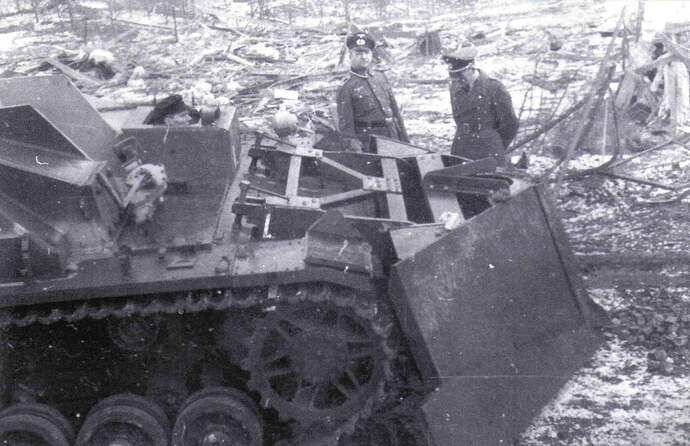 The one above was used in Magdeburg in 1944…

Oh, now you went and did it! Every model kit manufacture is going to come out with this vehicle!

Thanks for posting and sharing your work. Very interesting and different build, excellent modeling skills and photographs.

All three of those photos appear to show the same vehicle. In pic one and three, the driver and officer are the same. In the background of pic two, there appears to be roadwheels stacked up in front of the factory.
Ken.