I am after a styrene cutter for scratch building 1/35 parts. I have read a few reviews of " The Chopper II", but just wondering what everyone else uses for repetitive straight cuts?

There is one from RP Toolz also: 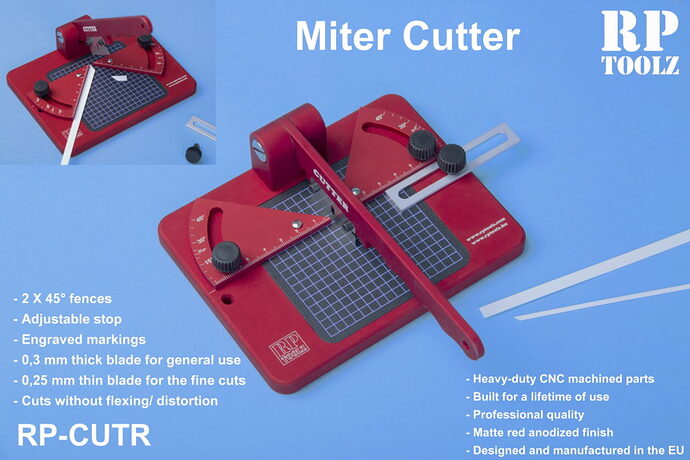 I did see that one on the BNA wesite and it was about $160 AUD. It does look really good though!

There is cheaper variant from GSW:

If you have this @Tank_1812 ,what is the length of the cutting blade?

I would have to measure but it’s the standard razor blade length. I measured basically 1 1/2” or 39mm.

Excellent…thanks so much Ryan! I appreciate that a lot.

It’s fairly accurate and very fast, I probably get 5 out of 6 “chops” the same length. Typically measure and tape a “fence” in place to butt strip against and chop away. It’s as accurate as my care in set up and time to butt part securely against the taped in place fence. 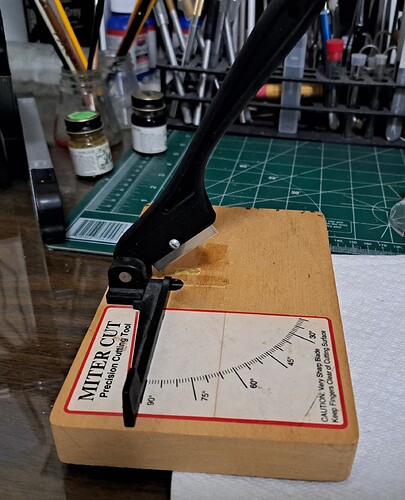 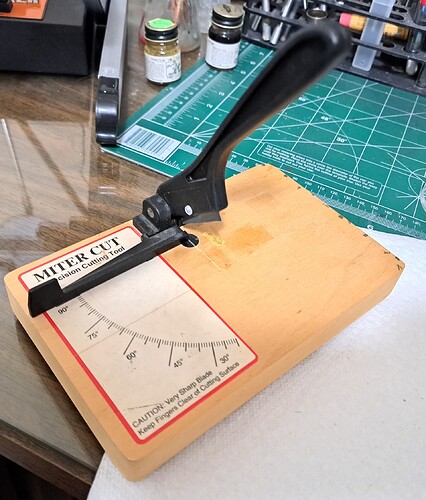 Have used it to chop out thousands of wire track pins for Fruil white metal tracks mostly plus chopping styrene strip & rod.

It held up better than my friends early $45 Chopper which had a divet develop in the board after much use. He filled salvaged his Chopper with epoxy in divet and carefully sanded it flush as a patch.

I have both the Chopper and the RP Toolz cutters and prefer the RP version. The adjustable miter angles fit tighter to the cutting surface which keeps thin stock from slipping under the angles.

Still, I had and used my Chopper for years and it will get the job done. I long ago substituted the tool provided miter angles for a set of small, stainless-steel triangles and squares. I just think the RP Toolz version is a good evolution on the original idea and an overall better tool.

I’d stay away from any similar tool that doesn’t have a rock-solid blade lever and plastic and / or wood parts. The entire usefulness of the tool is predicated on solid construction.

Many thanks for the responses. I have decided to go with the Chopper II, mainly due to price and your opinions. The rp tools one looks really good, but it was over double the price of the chopper II. I managed to get the Chopper II for $75 AUD delivered.

FWIW, I think you’ll be happy with the Chopper. It’s been around for a long time and is used by a lot of modelers.

One common issue with these types is that when you cut thicker stock, the razor blade will push through along an angle away from the original cut line, so on thicker stock you’ll still have to dress up the end cuts to square them up. I think it’s just a factor of the way the edge is ground onto the blade, and I don’t know of any source of razor blades that are ground on only one side.

Other than that one thing, though, these tools make short work of multiple, repetitive cutting jobs while adding a lot of accuracy to the work.

I use mine all the time and have been glad that I got it.

I use chopper II it’s smaller and more user friendly.

I use both the chopper and the Duplicate It,(35.00 from micro mark.found many uses for it,especially,armor plates for my gun trucks,tho instead of using razor blades I use my tamiya scribes tool,this cuts square and gives me less clean up on the cut.

unless they have changed the design recently, it uses a standard box knife blade
gary