Here is something you have not seen before. This is a pair of T54/55 training aids made by the US Army. They are copies of 1/87 scale ROCO tanks, made from that rubbery resin the Army likes to use for training aids. The track units are just stapled to the sides of the hull. There is some wire inside the gun barrels for stiffness. 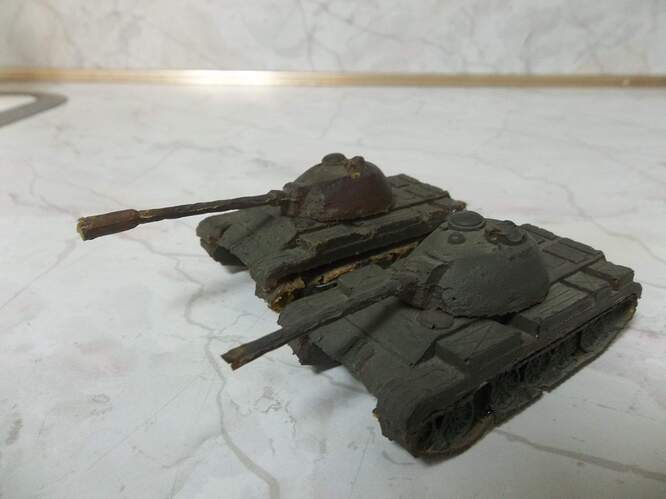 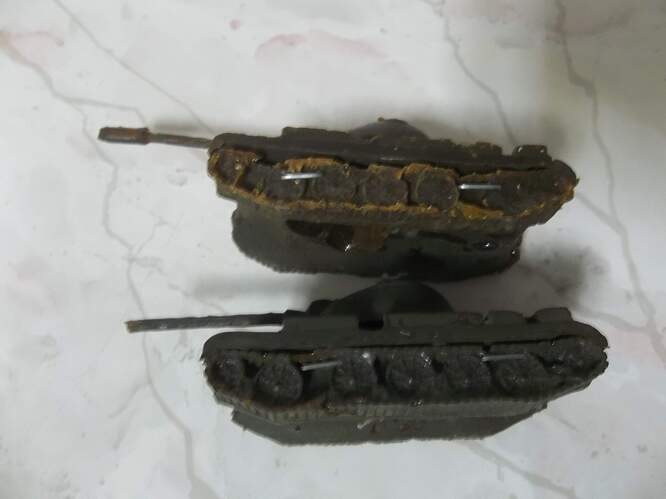 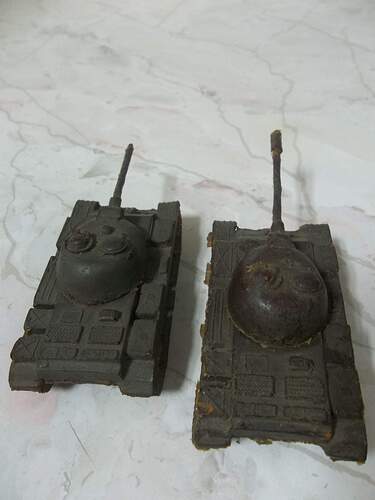 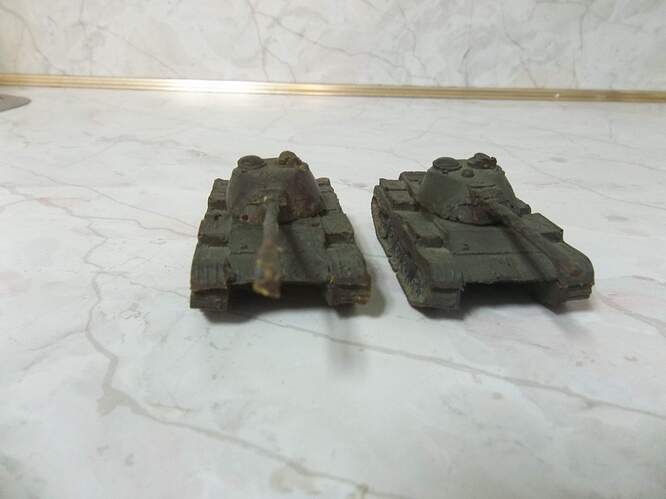 One of them is stamped T62, even though it is clearly a T54. 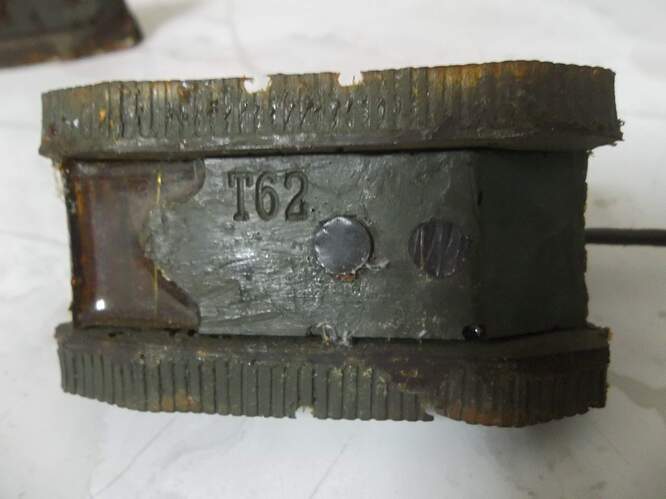 In schweinfurt, we used them on a sub, sub, sub caliber range for tank gunnery practice. The searchlight on our M60s could be removed, and a telfare device installed. A .50 cal machine gun was installed as a sub caliber unit, to allow live fire training on smaller ranges that could not handle main gun rounds. But an M-16 could be substituted as a sub caliber weapon to the .50 cal, for use on even smaller ranges. In this case, the M-16 was fitted with a sub caliber system, so it would fire .22 shells, which we then used on a very small range on the back of the kaserne. So it was a sub, sub, sub caliber system. These little tanks were some of the targets from that target range.
Ken.

We had similar things in the Milan
platoon in 83 for AFV training purposes. They were white metal and painted green.
Not sure what scale but they were small… Scaled to represent the vehicle at 1.5 to 2km through the Milan sight. There were T55, T64, T72, ZSUs, bridging vehicles, tracked ground to air systems, 2S3s etc. Basically anything Soviet in that period. Very useful tool for training.

And flash cards in the mid to late 70’s, in Germany.I also built the Tamiya T62, and wondered how it would look at a scale distance from my tank’s optics.(M60A2)

Yes I remember the cards very well. I was the best in my company at it, even in basic training because I’m sure like many on this site I grew up looking at tanks and building models when the vast majority of kids weren’t into it.

Most of the people in my units could barely say friend or foe, I could tell them what model and sometimes sub-model. That’s what modelling does to you.
Ken.

Lol Ken you’re so right, however I wasn’t nearly as good with aircraft. I still have those cards somewhere I think.
I remember just getting to Germany and having one of our squad leaders so pissed at me because he couldn’t identify a certain tank and didn’t want me telling him he was wrong- he insisted he was right lol

I have this abiding memory of watching a news report during the early stages of the Falklands conflict (1982) when I was in my early teens, showing a Milan ATGW team on the deck of SS Canberra. They were supposedly tracking a motorised Tamiya T-34/76 that was running across the deck. 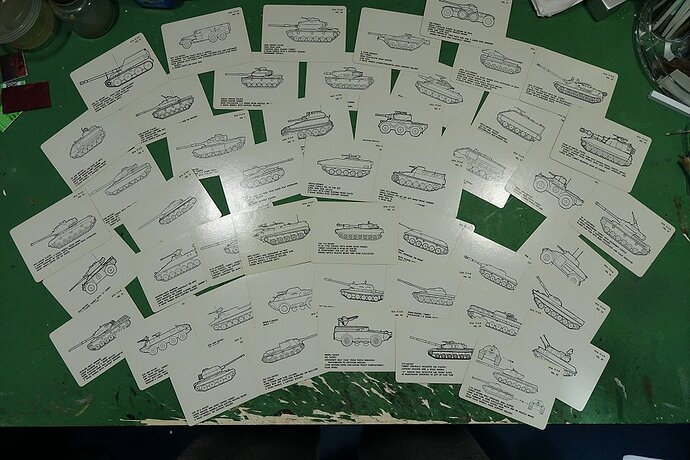 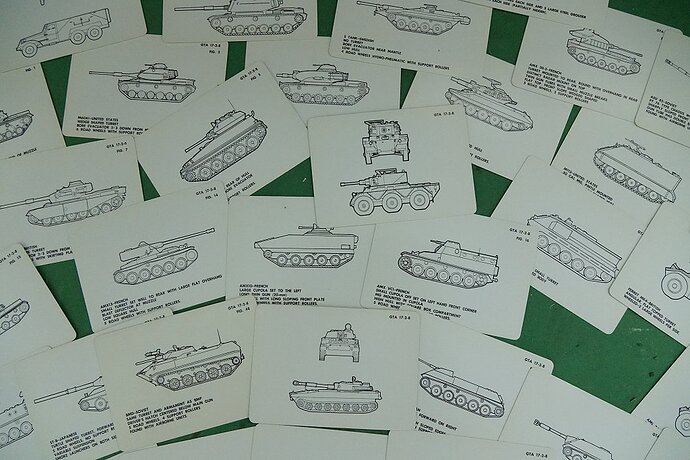 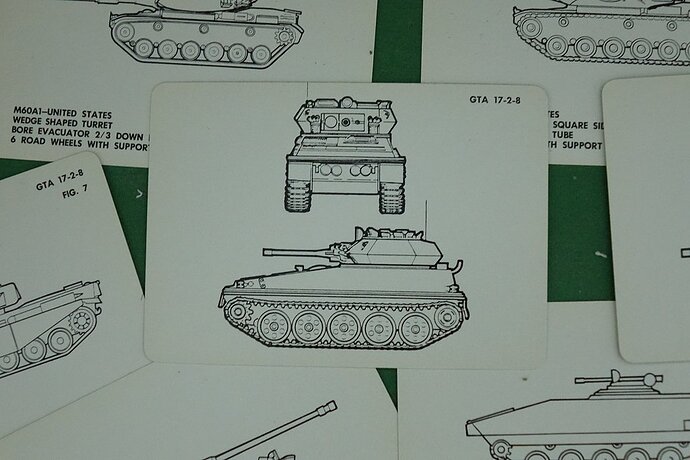 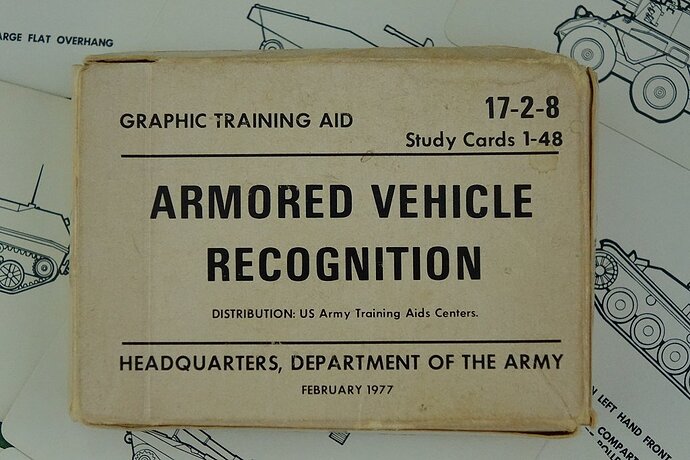 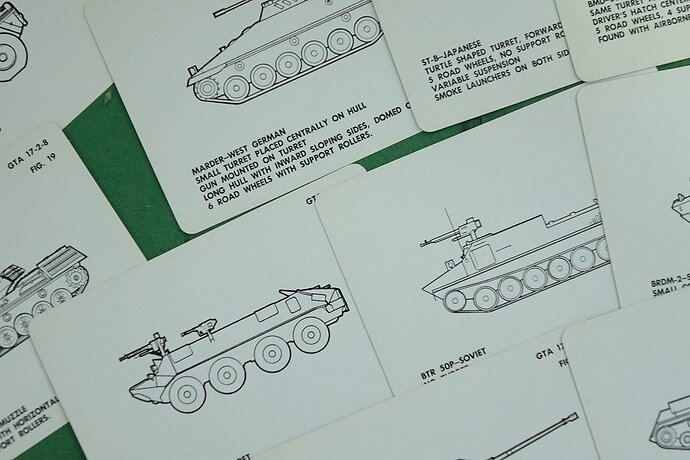 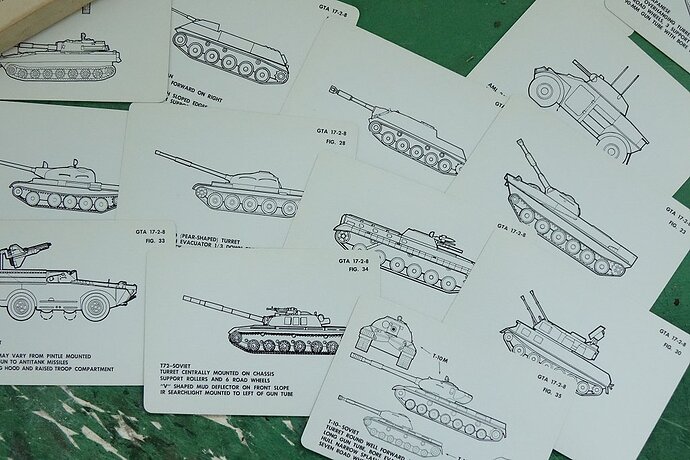 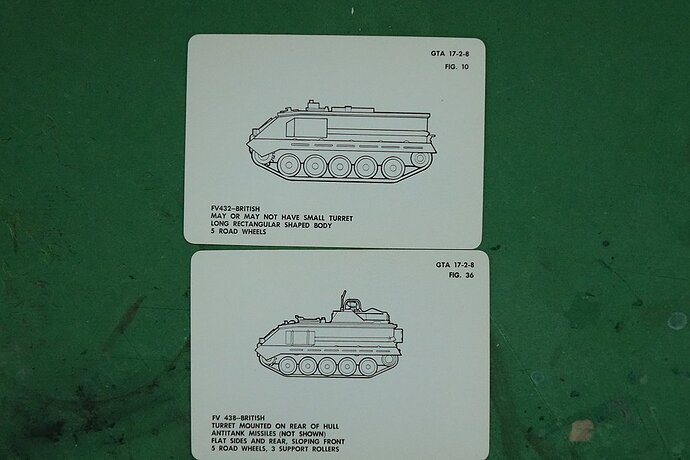 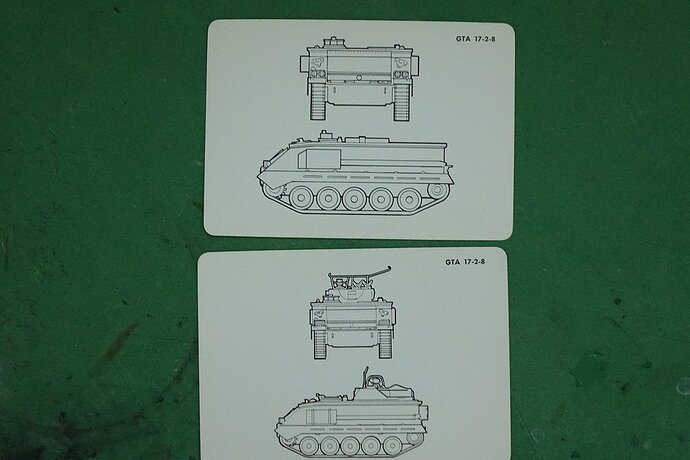 Annnnnd, the training officer would have mechanics and non tankers sit on either side of us, and put their foot on ours, we would lift up for friend,when being tested.

Hmm, not sure about that ‘T-72’. Looks more like T-64 to me with those small wheels and turret bins configuration. Still, as long as you know to shoot it…

I remember the S2 officer who bought my T62 (the Tamiya kit) when he saw it on a health and welfare, thought it would make a great training aid (better than the ones from TASC). He also asked me to paint and mark the training aid vehicles the battalion had (hideous things, calling them craptacular is actually a compliment). I made some bucks and got an AAM (promotion points, woohoo!!!) for my hobby.