Got the inspiration for this diorama from reading “Red Army” I’m trying to go for a an officer directing where a tank would go. As if they need to orient there gun tube in a general area and possibly telling the TC to get off the road and into the lower areas. 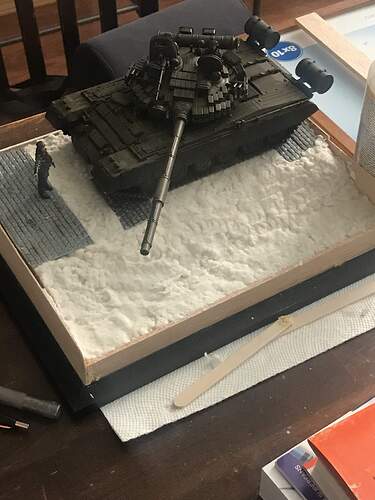 The ground work is parts of a mini art cobblestone road base that i had. I decided to cut it up and spread it out and I’ll cover it with some dirt effects to make it look as if the street is worn and torn down. I’m considering moving the turret to a 90 degrees rather then at the 45 degree angle. The dismounted officer with his pistol is pointing out an area for them to cover or where he thinks they should position themselves.

Looks good. I avoid scenes where all the elements are aligned at right angles or parallel to each other and the viewer. Boring! I’d suggest you angle the tank 20 degrees off the road. Much more interesting /dynamic.

maybe position the tank at about a thirty degree angle with tracks showing a dead steer.
gary

@Bravo36 i was thinking the same, dismounted commander in same position but the tank more off kilter.
@Gary_Totty1 if I’m understanding what you’re saying the tank should almost be off the road? 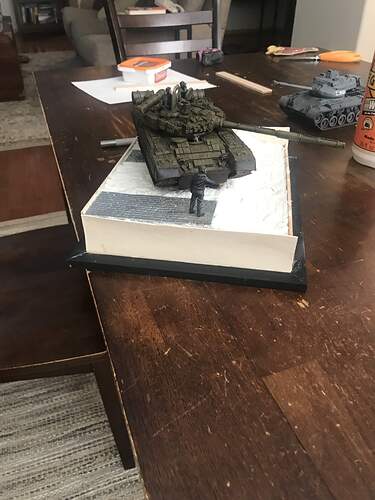 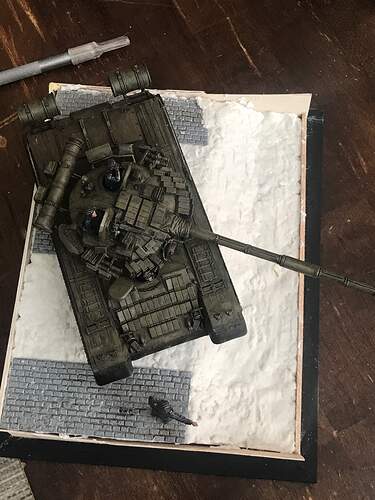 No not that much of an angle. Just about twenty to thirty degrees with the snow piled up against the one track side. The track marks in the snow will add a lot to the diorama.
gary

@Gary_Totty1 oh that’s not snow, that’s just the ceramic base I’m using. I’m going to put mud/ dirt down on the road. I’ll do mud covering up near the tracks like you recommended though! I think i see what you’re talking about with the angle of the tank

I think that’s much better. You could then point the gun into that corner, to keep it over the base. IMHO, of course.

@Bravo36 i think i like the idea of that, gives the crew and the commander pointing a general area of what their looking at as well. Also gives the appearances that maybe they’ll get off the road and set up in a field

But the officer, just staying in front of the track… does he feel safe?

They wouldn’t dare run over him!

Not intentionally; at least, so thought a lieutnant that wash crushed while training the crew of a Leopard in the '80s.

It’s looking good! As the others already said, the diorama looks more interesting without straight angels. One suggestion is the change the angel of the road like the red marking here: 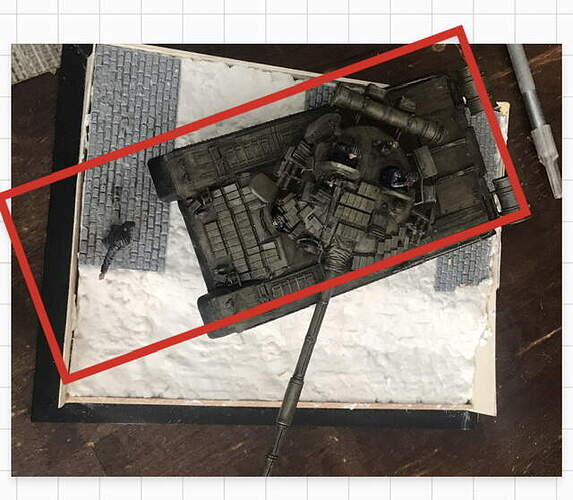 But hey, it’s your build, you do as you want.
Keep up the good work:)
/Erik

@DIOWORK i see what you’re saying with the angle. I think I’m going to go with that for another dio i have planned soon. Unfortunately i think this is a big base for one tank and i could of added some more pieces to it.

Yes, I thought so, you have already done the base etc. But try to have the tank a “little off road” as you did in the last pictures, that will be good.
In your next diorama you could try this “no straight angel concept”, it’s good practice:) I wish you all the best with this one, enjoy and have fun while building. /Erik

Greg, just to back up what the others have said … it is looking great so far and I am sure the finished item will be excellent. One thing you could think on for the next and future builds is the surrounding area.

With how the barrel is slewed over the side aspect, from just to the left of the barrel to the far right corner you could introduce a narrow/thickish hull height earth berm with some vegetation on it to give the tank a semi hull down fire position. It doesn’t immediately look like like much, but it gives the dio a higher aspect in one area without losing focus on the tank.

@Johnnych01 that was another concept i had thought about, a modified hull down using the raised street as a firing position to utilize the low silhouette. I have a couple more kits that i may try and achieve that look with in the near future.

@DIOWORK thank you for the recommendations. I’m still getting used to the diorama building as this is my second attempt. I think i have an old shep Paine book that i can dig out that goes over these concepts, it’s been awhile. 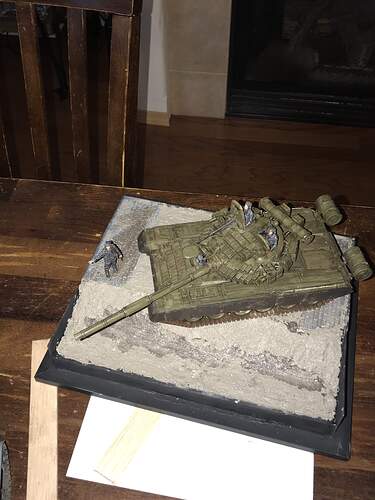 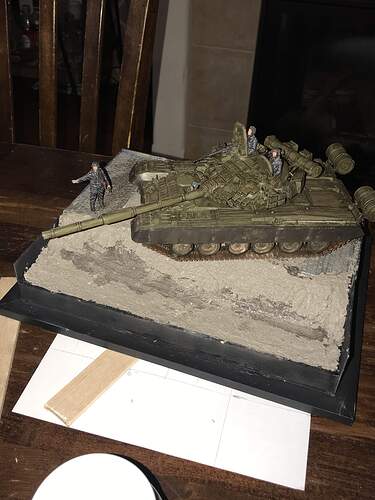 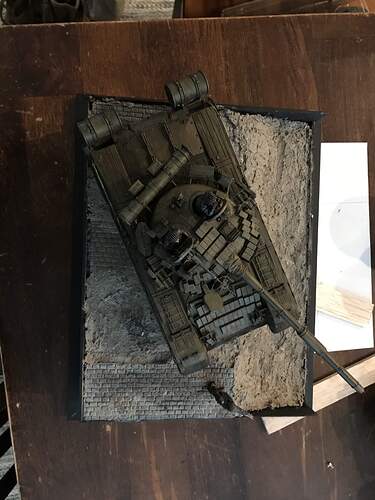 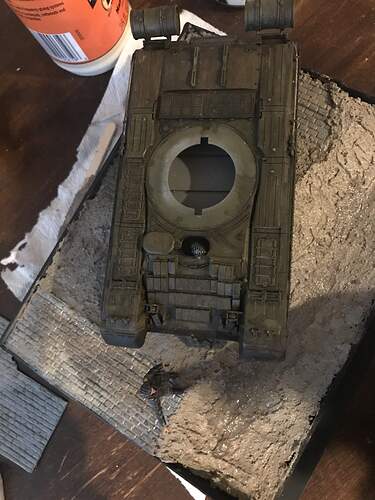 Added some ammo mig dry earth and some mud texture to the diorama base. I painted over the cobblestone with both effects, i wanted to get a dirty street look. My hope was to show an old back road that had at one time been cobblestone but had slowly been eroded away in a sense by vehicle traffic.
Tonight I’ll add the vegetation and do some minor work. More likely then not I’ll be finished by the weekend.

Calling this one done for now, finished with the vegetation last night. I feel like the vegetation is decent but i want to expand the products i use for it next time. Any recommendations for good vegetation? 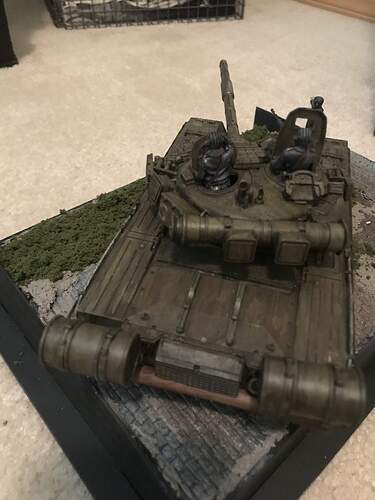 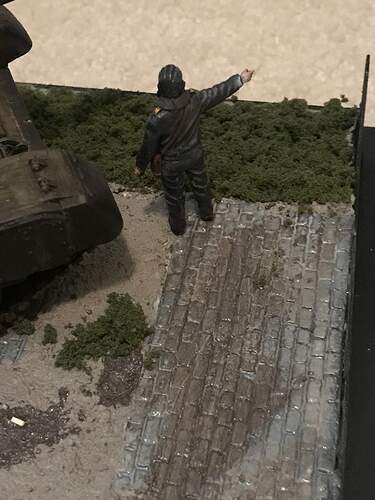 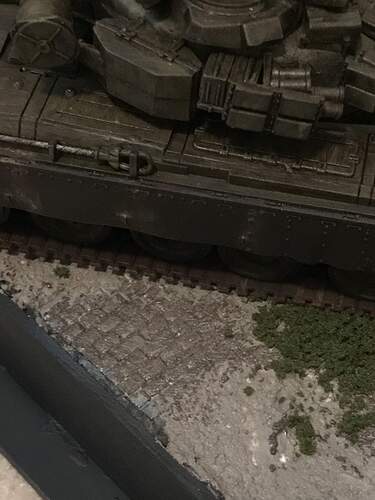 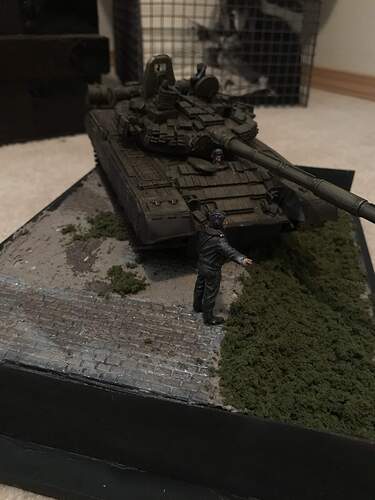 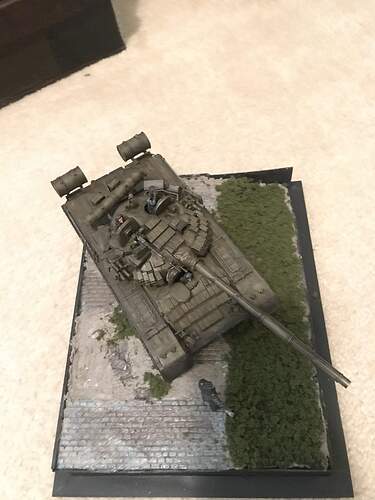 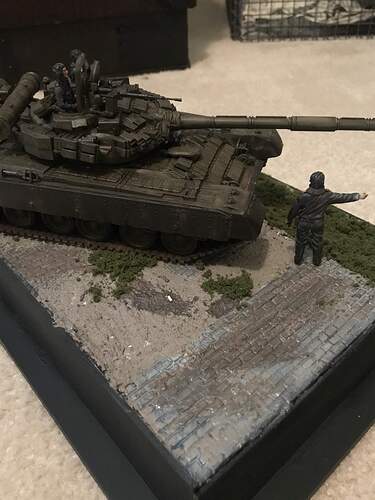 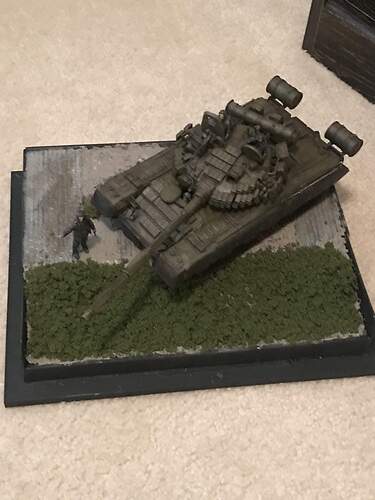