T80UD VS T84 What is the visual difference?

I see photo’s Frenchy is posting and I go that’s a T80 UD. But now I am not so sure it is not a T84. What visually can I see that would be easy to identify one or the other?

What makes a T80U visually different than a T80UD? Are they the same except for a back deck or something like that? 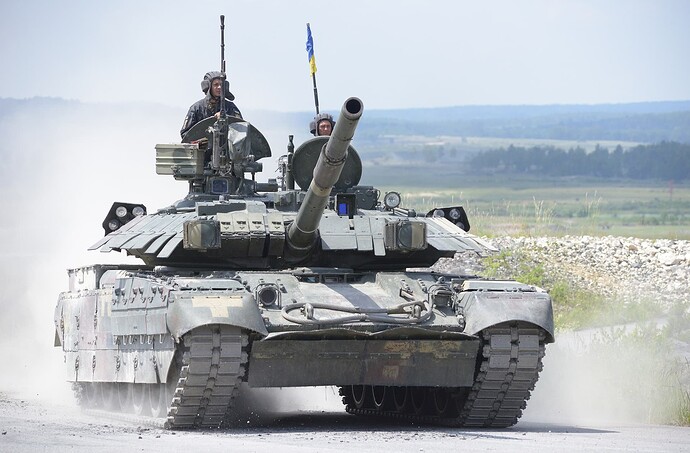 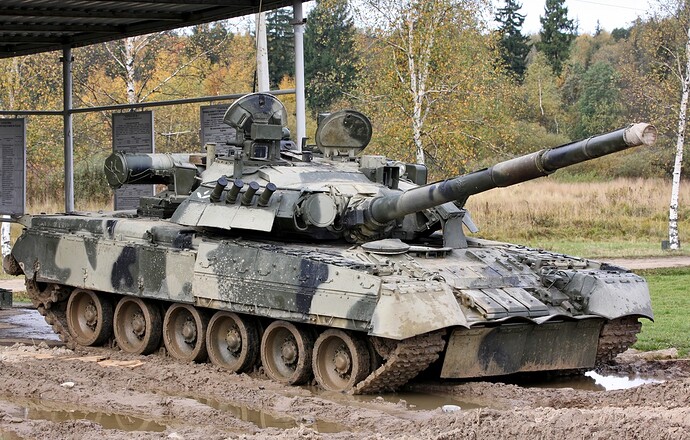 Based on your examples, I have not seen any photo’s of T84’s based on a lack of dazzler lights, Front slope armor, smoke discharger location and extension of side skirts.
Between the T80 U and the T 80 UD,
I have seen multiple photo’s of T80U;s based on the smoke launchers being on the turret sides like a T 72 and an IR searchlight. I assume the T 80U’s are Russian based on a lack of any hint of Ukranian colors or markings even though no "Z"s are seen.
I have not seen photo’s of T80UD’s with the rear placement of smoke dischargers and a lack of the IR search light.
There are several photo’s of the T 80 BV and one of a T 80 BVM that I have seen so far. 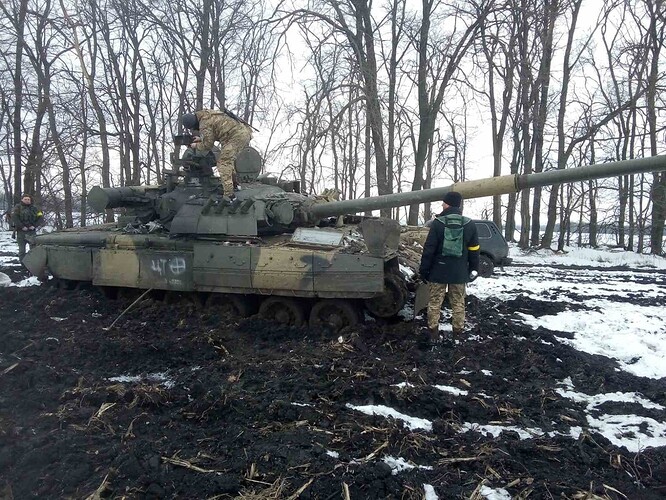 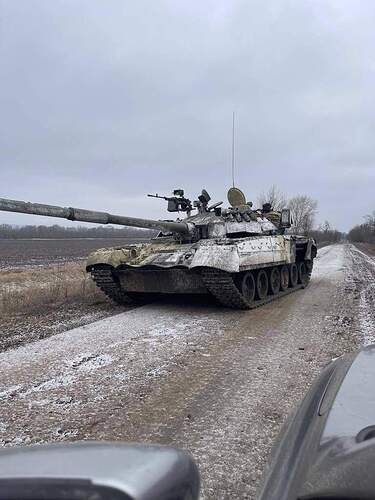 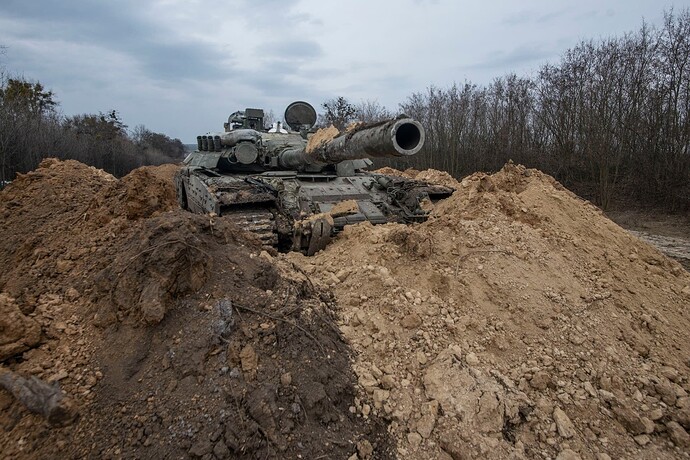 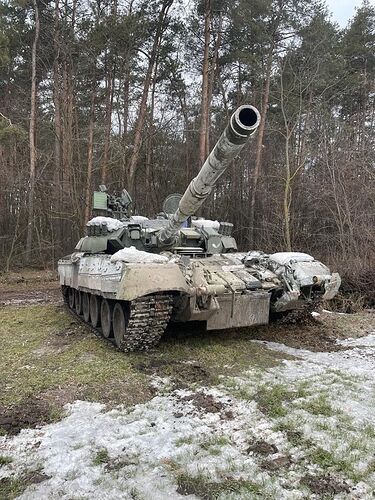 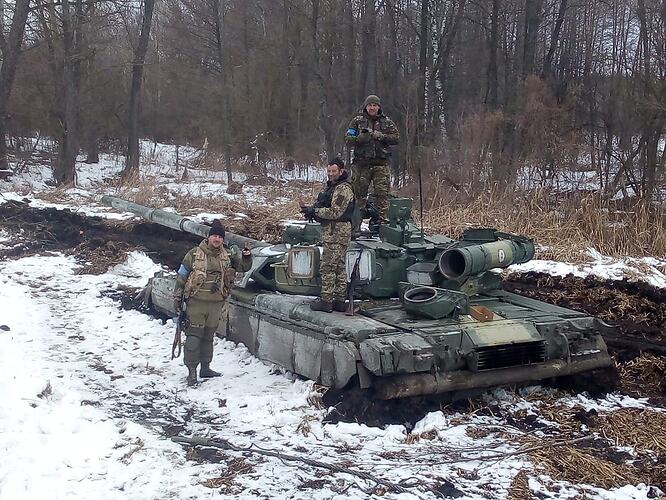 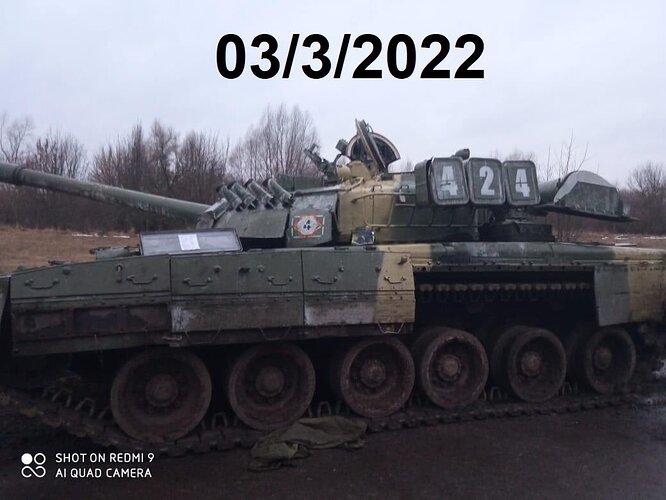 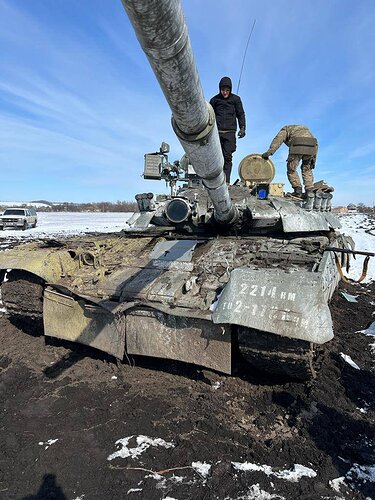 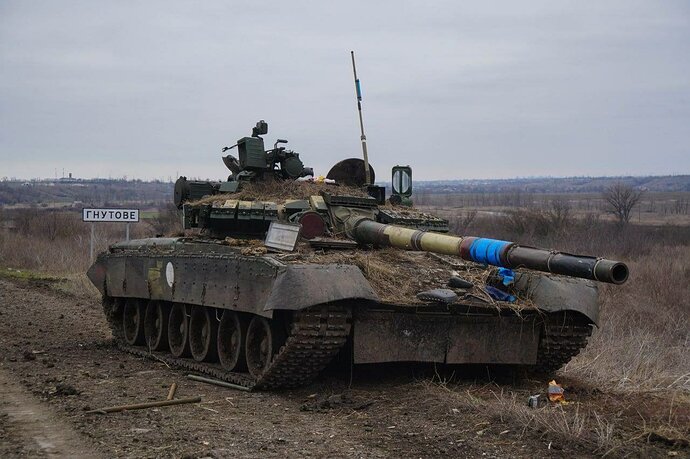 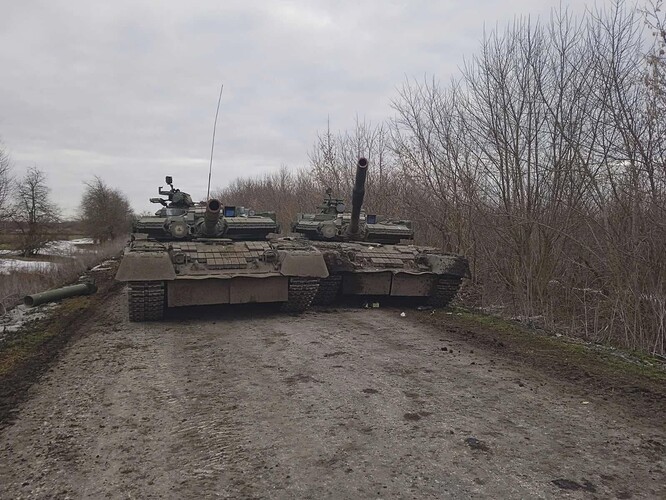 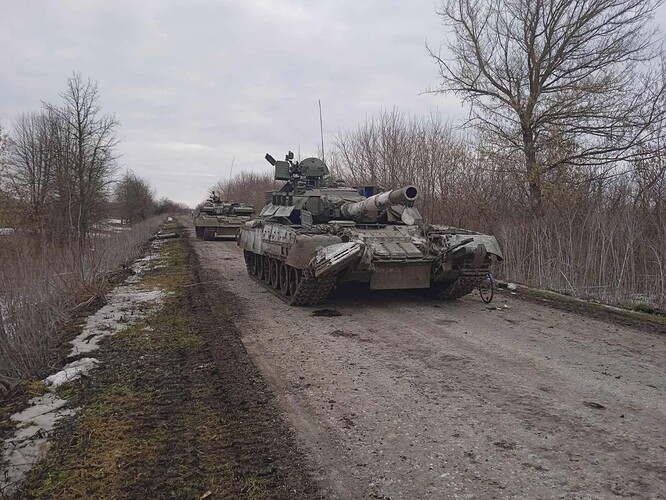 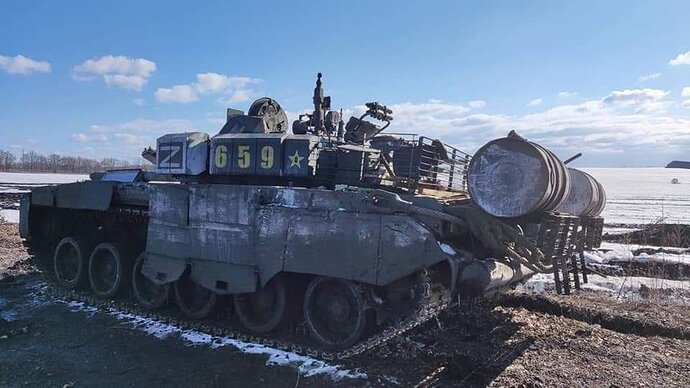 I was thinking the T80 U was going to be a rare bird in this action but it seems to be popular.

Based on your examples, I have not seen any photo’s of T84’s based on a lack of dazzler lights, Front slope armor, smoke discharger location and extension of side skirts.

Ukraine only has around a dozen or so T-84s, so they will be an extremely rare type to encounter. Their main tank is the the T-64 family, with lesser numbers of T-80 and T-72 types.
The T-80 BV & BVM have the Kontakt 1 brick ERA. The T-80U use the Kontakt 5 “tile” ERA. Also the T-80U have their smoke mortars on the Kontakt 5 on the frontal turret arc.

Trumpeter has the smoke mortars for the T80 UD in the same location as the T80 U so there was /is some confusion to me. Were those T80 U pictures I reposted from Frenchy all U’s or UD’s?

As far as I’m aware that last pic @TopSmith posted is indeed a T-80BVM. The main differences to the T-80U and T-80UD is the shape of the turret armor- the BVM uses the Relikt package which is flatter and wider than the older style of ERA bricks. You can also see that on the side of the turret (where the ‘Z’ and ‘659’ is) that the armor here is a different shape again. And the bit that makes it easiest to tell apart (if the angle of the photo or video shows it) is the cage armor around the rear 1/4 of the turret and hull. Though on the photo of ‘659’ it would appear the cage on the rear hull side has been replaced with side skirts- could be because the cage was damaged or a lack of spare cage parts or something.

This is a T80UD the Pakistani’s bought from the Ukraine.(No IR search light, smoke mortars moved) 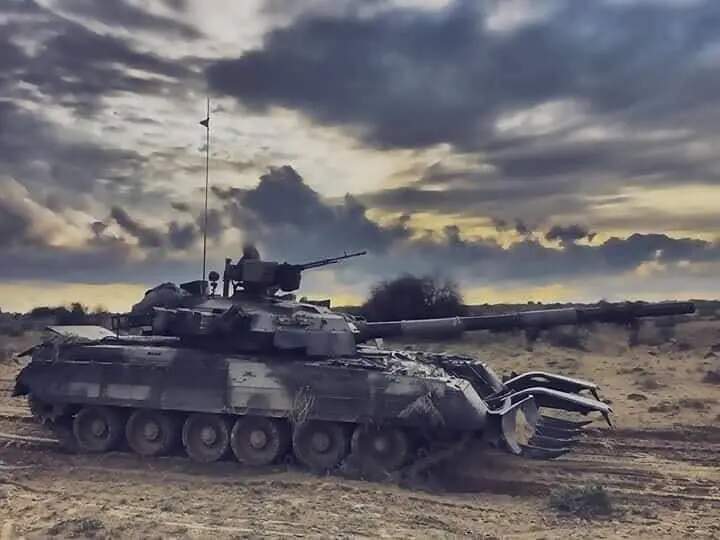 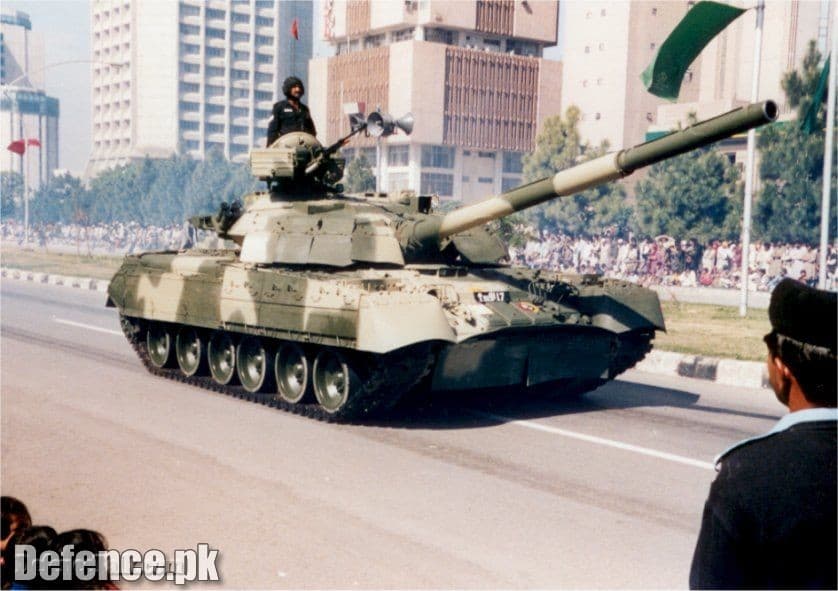 I am wondering if this modification was a Pakastani thing and the smoke mortars on the Kontakt 5 armor is a Ukranian thing for their T80UD’s? 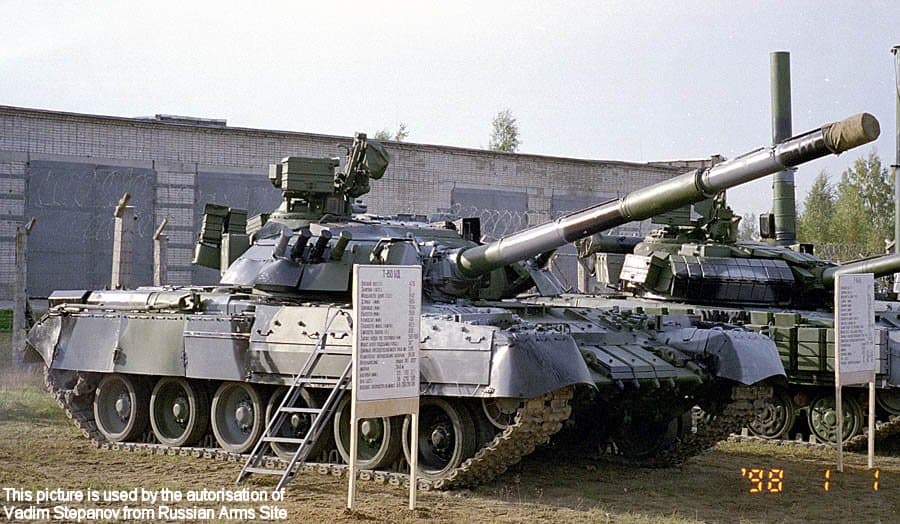 The smoke dischargers location and overhead is very specific to the T-84.

The T-80U and UD turrets arrangment is different. The NSVT is remote-controlled on the UD and has smaller ammo boxes while on the U it is pintle-mounted (4 different possible locations) and the ammo boxes are the large squarish ones.
There should be a visual difference on the glacis as well but can’t never remember it.

The T-84 also uses a welded turret vs. cast. Regardless of the variant, Russian tanks have really taken a beating and have completely changed my personal perspective on how “good” they are. Remember after Gulf War I (Desert storm) the excuses we heard about their T-72’s being destroyed with ease was they were not “B” models and poor crew training. Looks like Russian armor is way overrated.

To be honest most people have a higher regard for their own tanks than warrant it. Tanks are vulnerable in many ways. You just have to realize that and exploit it.

I am unsure of the ownership of the above T80U/UD’s because there are no “Z”'s and no blue/yellow ribbons.

The camo scheme can help. The Ukrainians seem to have jumped into the digital scheme with both feet. The Russians use that scheme looking like MERDC, but with three colors.

The T80 U/UD photo’s must be all Russian as I see no Digital Camo on any of them. The T80BV with the camo and blue ribbon is Ukrainian.

Even then, solid green is the current de-facto paint job for vehicles.

Yes, many of the T-72B types do look to be in good old overall green. You really can’t go wrong with that paint scheme for the Russians.