Started building this kit over Christmas break, was visiting some family and decided to bring a small kit along to keep me busy. It’s a pretty simple kit, which made for quick building, but I was not all that impressed with the fit. The putty had to come out a few times, and some parts like the grousers were a loose fit. Would make for a nice beginner’s kit if not for the PE, which puts it at a more intermediate level.

The only WIP picture of the build I have, 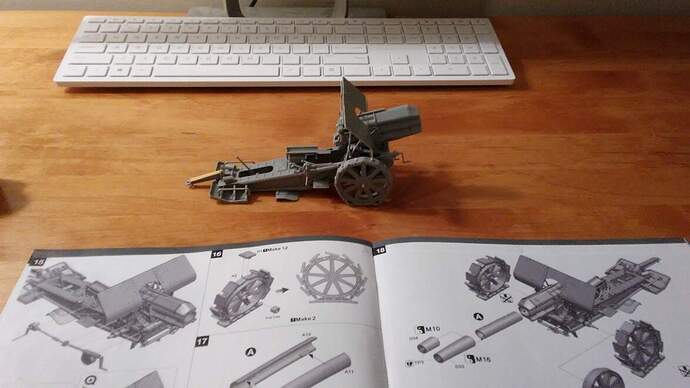 Built on the same desk that I built my first kit on 7 years ago. Came full circle.

Once back home, I shelved the kit and got a little distracted expanding my workbench, but with that done it was straight back to modeling.

The kit comes with a number of panting options. I wanted to avoid masking or fine airbrushing work, but didn’t want a plain Jane single color piece. That left me with one option, dapple camo! It also has the bonus of looking a little odd, and I haven’t seen many people try it before, so why not.

Primed and painted it’s base color. I used Vallejo 3B Russian Green as it looks fairly close to the forest green color from the painting guide. 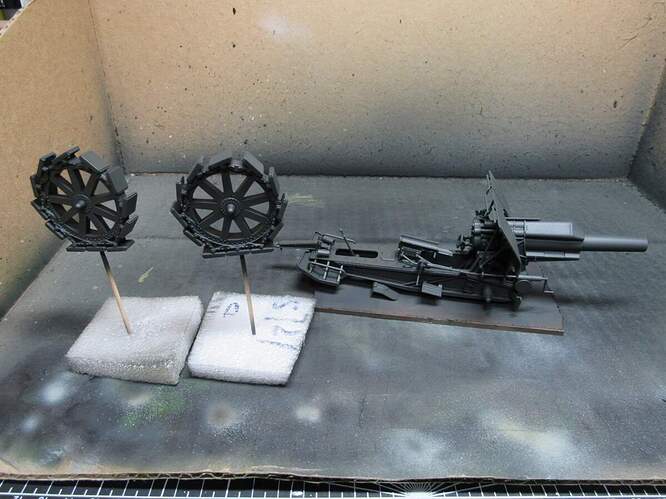 Now it was time to start dappling. I settled on Vallejo’s dark sand & flat brown for my dapple colors and had at it. 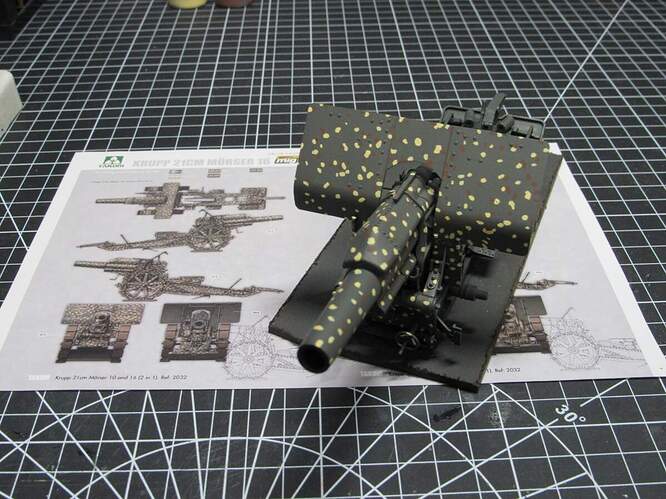 … and it doesn’t look right. I had been following the guide loosely, so that most dots were accounted for and in roughly the right spot. Turns out I had to be a little more ham-fisted. During the first try I defaulted into detail painting mode, making small, controlled dots, when in reality they should have been much larger. Easy enough to fix, they needed a second coat anyway. I found that a number 1 brush dabbing straight into the surface worked best, leaving the least amount of brush marks.

One small nitpick is that I wish the instruction sheet was larger. Working off that small guide made things a little more time consuming.

Alright, so the 2nd try, 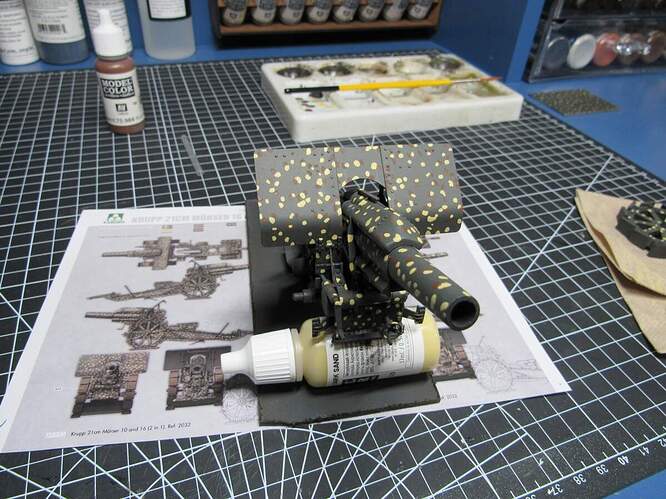 I think that looks better. Time to dapple the rest of it up. Getting the gun and shield done gave me a good feel for the process which made finishing up on the carriage easy. 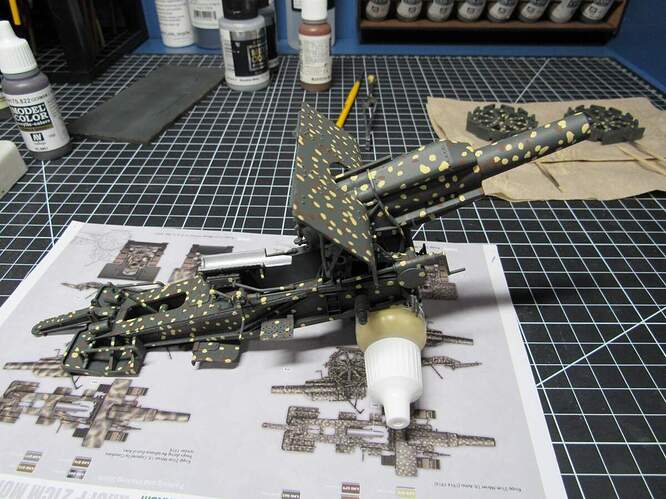 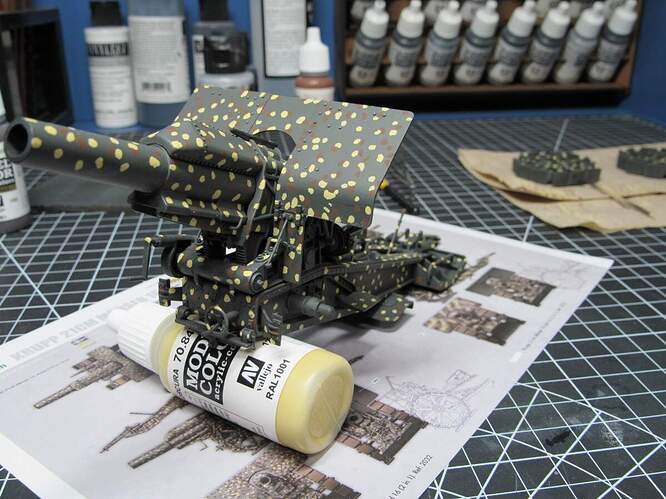 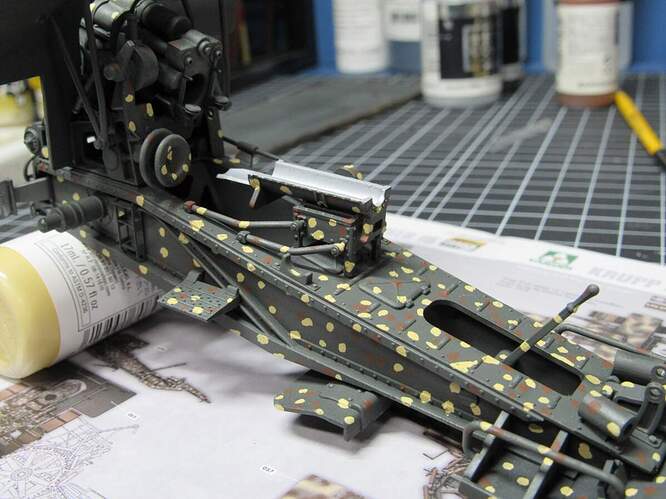 With the painting done I went on to chipping. I had some fun doing this on the grousers(?). The instructions would have you paint them a wood color, but the reference pics I saw all showed them as sheet metal wrapped around what I assume was a wood insert, so I painted them as if they were metal and chipped accordingly. 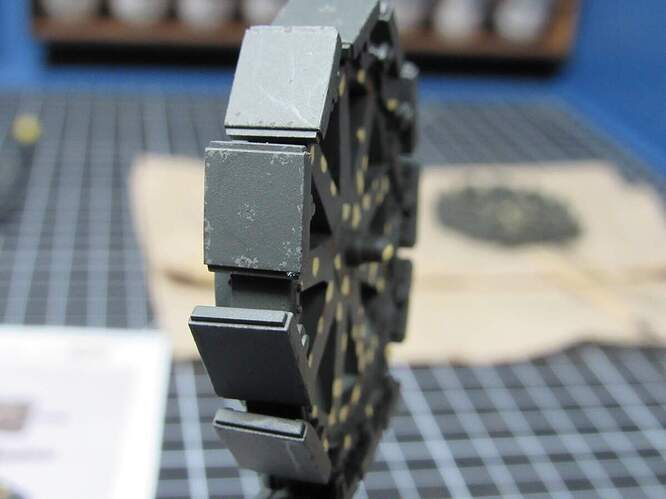 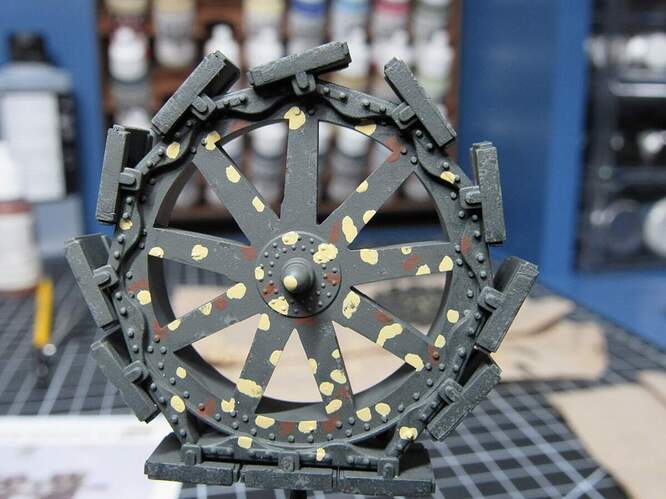 That’s all the pictures I’ve got for now. But since the chipping I’ve gotten two filters over the model, a dust spray, and a pin wash. So more updates soon.

Really liking that scheme. Any more I pick kits that have an interesting/different/outlandish paint scheme. Your’s will stand out on the contest table or in the display case. Now for some weathering to finish it off.

Thanks Armorsmith. Afraid it’s gonna be a lot of weathering for this one. I want something nice and muddy, and it just might end up being the most weathering I’ve done for a kit.

Calling this one done 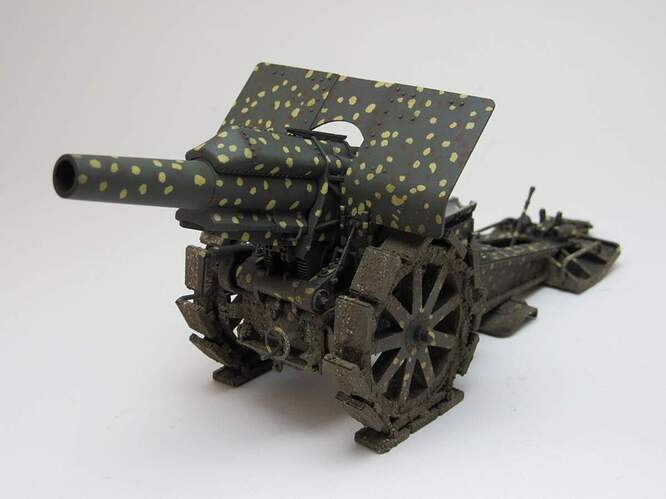 Weathering was a couple filters, a light dust coat with the airbrush, around 3 layers of home brew mud effects, another dust coat, a heavy wash over the mud, then a dot filter over the shield and gun, and finally some oil paint shading and speckling. 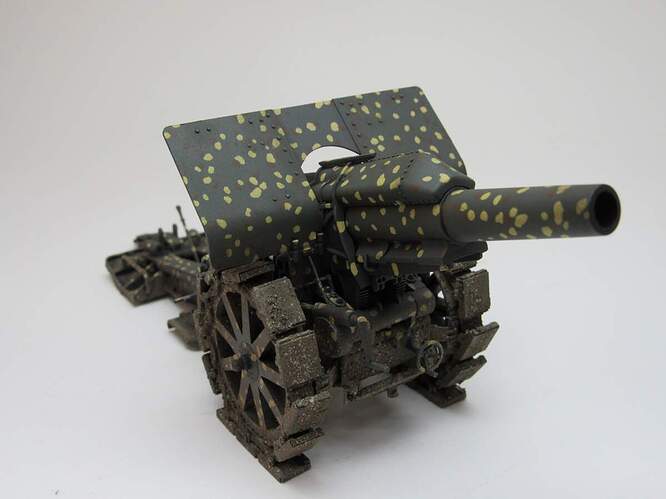 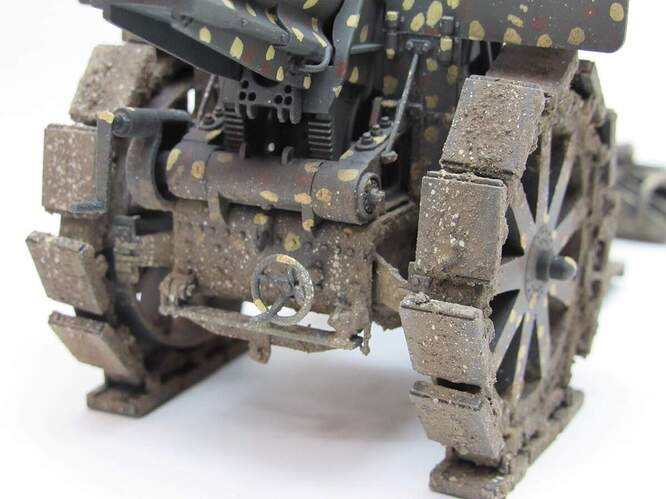 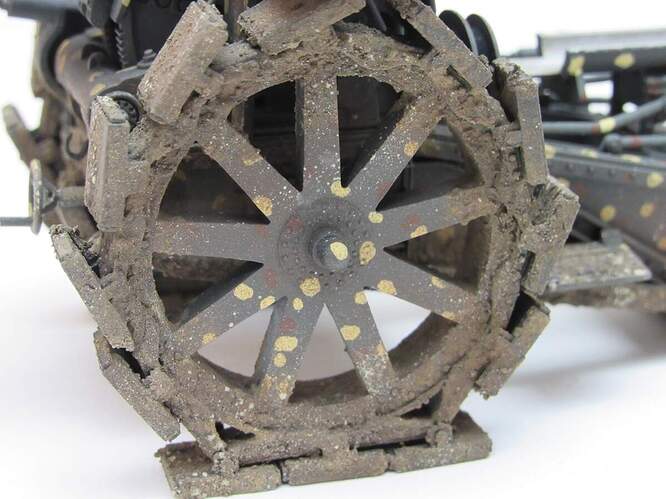 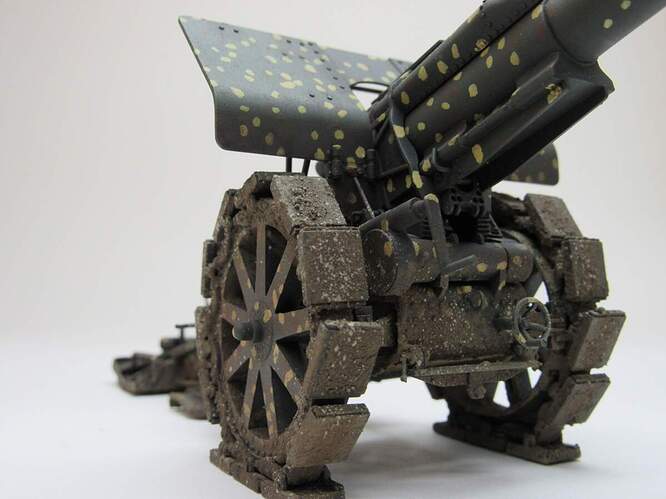 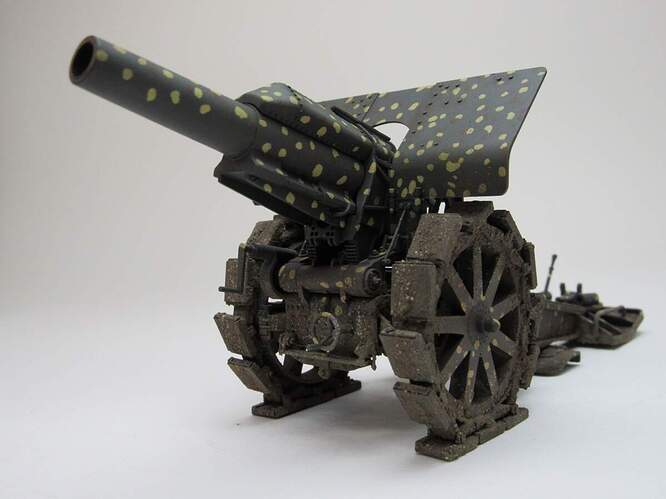 I think I overdid the speckling with too light of a color, but overall I like it. The home brew mud effects were a first for me and I like the result enough where I’ll use it on future builds. Just a slurry of plaster, pigments, Vallejo matte & thinner, then dabbed all over. I also like how the dot filter turned out on the gun shield, normally the dots leave stains, but this blended perfectly.

It could use some wet effects in spots of the mud, but I’m already itching for the next project. Think I’ll do up a simple wooden base for it though. Thanks for looking in.