Way back in 1961 Mazda partnered with Wankel to develop their rotary engine, and the 1sk Wankel powered Mazda was introduced in 1967. Shortly after the introduction, Mazda decided to go racing in various classes to show just what Wankel engine was capable of. By 1988 Mazda had designed and raced the 767 and 767b prototypes at LeMans finishing 17th and 19th.

Being concerned that either Toyota or Nissan would win LeMans before them, they designed the 787 series which closely resembled the 767. What was really new what the replacement of their model13J 3 rotor Wankel engine with the new R26B 4 rotor 2.6 liter Wankel engine. It had not two but 3 spark plugs per cylinder, 650 hp rather then the 930 hp it could develop for reliabilty concerns, and was the loudest engine on the track that could be heard more then a mile away. I read that you could even hear gear changes at that distance. One interesting fact that rather then keep the transaxle design in house, it used a Porsche unit instead. 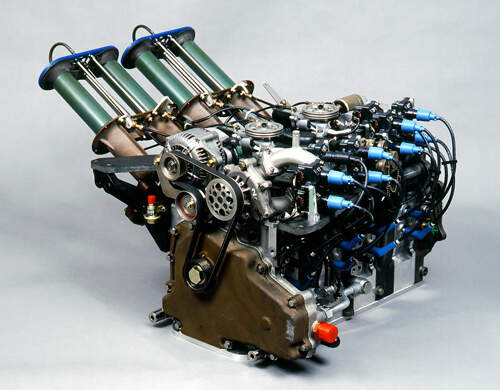 Both of the Renown sponsored 787bs failed to finish the 1990 LeMans race. For the 1991 race Mazda entered 2 787bs and a 787. Under the weird FIA rules to help fill both prototype classes and the grid as the Bs were in a different class then the older 767 which had a smaller 3.5 liter engine. 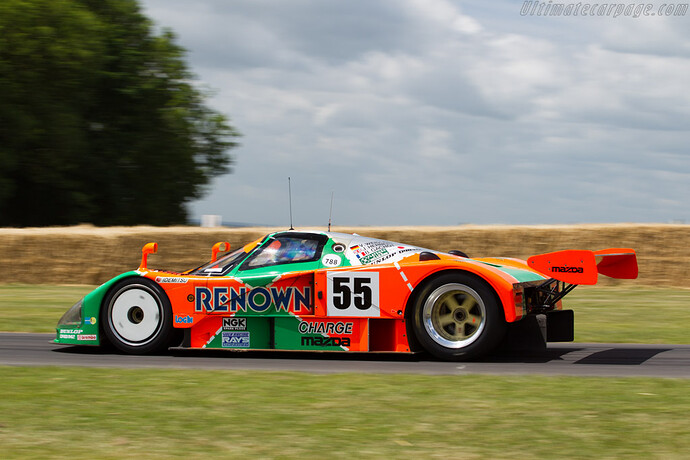 The FIA after seeing just what the 4 rotary engine was capable of, decreased the Group C engines to just 3.5 liters, the same as the current F1 engines, and the 787b was effectively banned from FIA endurance racing. 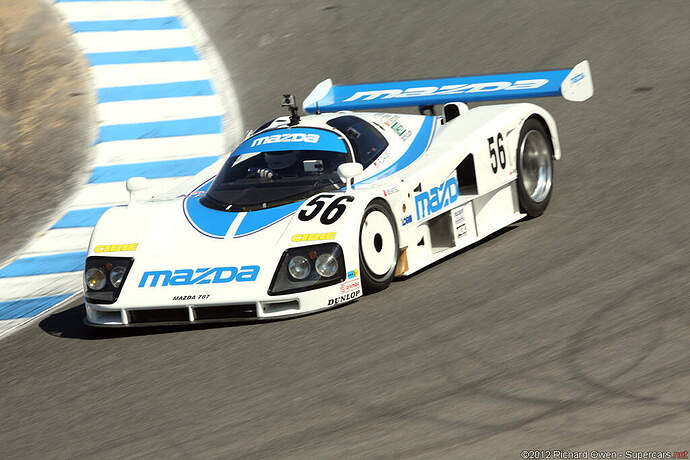 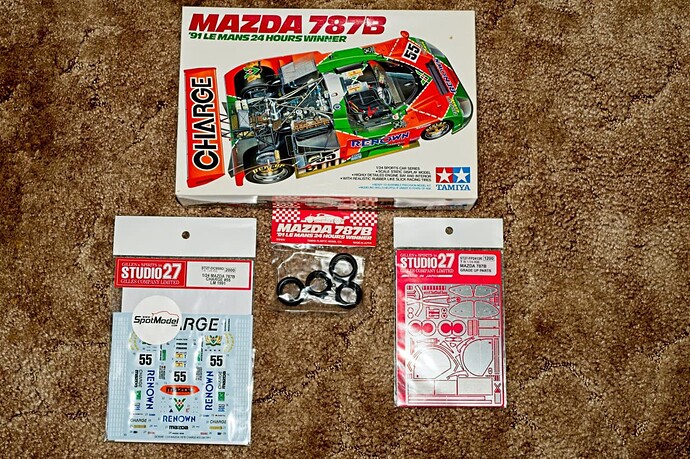 Mazda 787b 5 3 22 21280×853 261 KB
As my usual build method I started with the body right through painting, decaling, and clear gloss. The body parts were molded in Orange plastic. I primed the all the body sections with my usual homemade Tamiya primer combo of the their Gray and White. Gave them all a full day to dry, then a lite rub with Micro Mesh 8000. No primer picture as I forgot to take one once again. 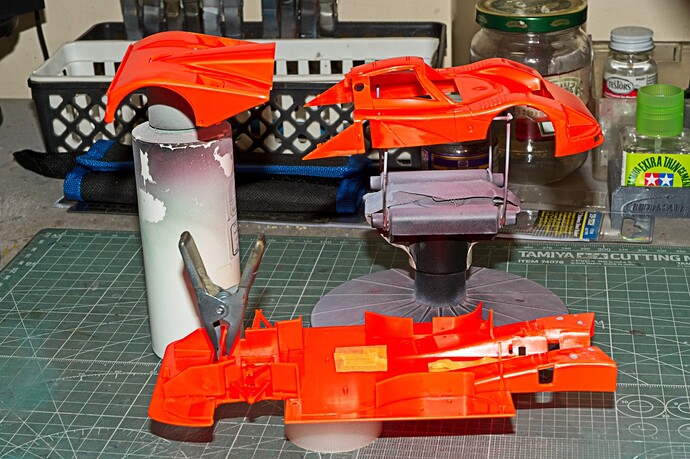 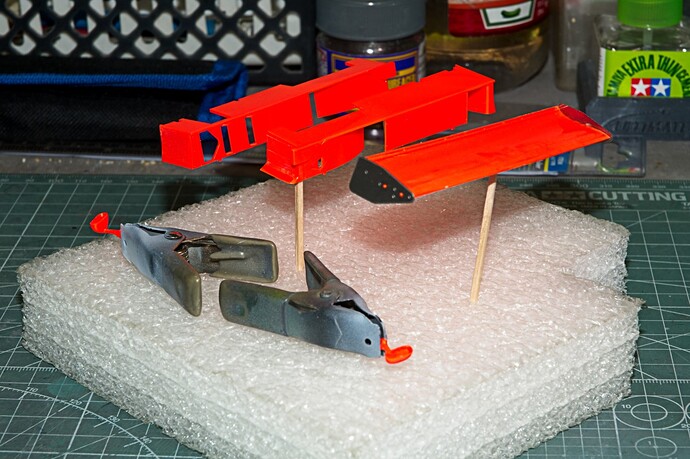 Mazda 787b 5 3 22 41280×853 244 KB
My plan was to paint both the Mazda Fluorescent Orange and Green rather then use the old Tamiya decals except on the roof where those two colors plus Silver and Black form the 4 sides where these colors meet coupled with 2 decals layered over White box decals. Just to complex of a design to paint. The Gravity paints are designed to go over a white basecoat, so I used one of my many bottles of various shades of Gravity White paint. 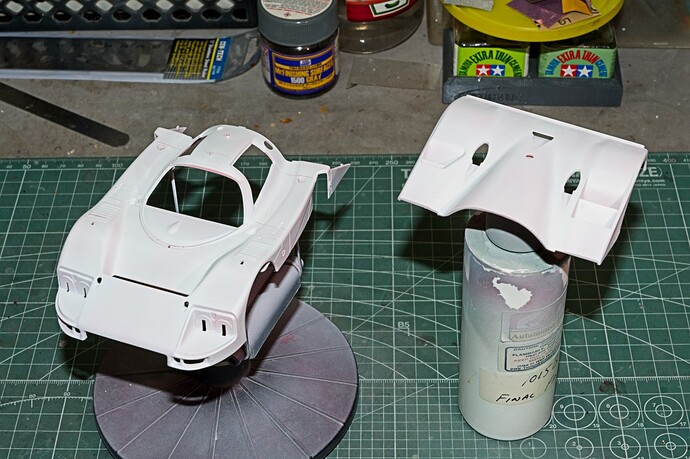 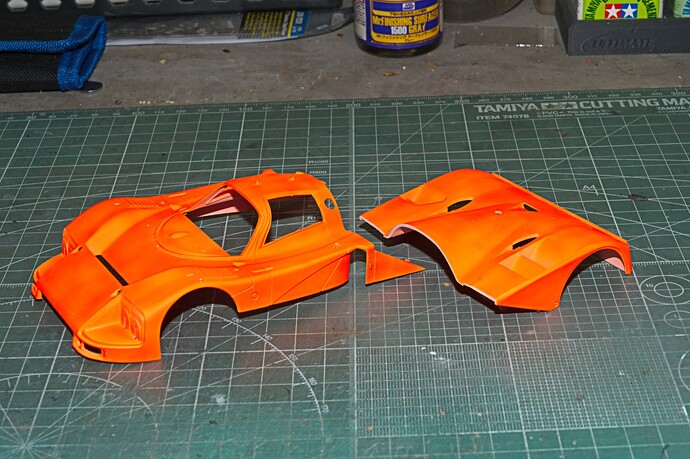 Mazda 787b 5 3 22 61280×853 265 KB
Taped off about half of the Green sections and applied the Green Gravity paint. An hour later I removed the Tamiya masking tape in less then 10 min that took a good hour to apply.
Once again I forgot to take a picture of the painted Green sections.
I gave the Green a day to cure, then 8000 Micro Mesh and got ready to lay down those decals on the cabin hood, the anti glare panel with a sponsor decal interlaced in it. Took the anti glare panel out of the warm water and it just separated into 6 pcs. Tried my best to reconstruct it, and it came out OK, but the decal for the roof was even worse. I tested a few more decals that I would be using from the Studio 27 sheet and 2 out three just came apart.
So now what were my options? 1st I checked my usual AM decal companies. None had any decals for the Mazda. I emailed Tamiya USA and they had none. I tried Cartograf but they said if they had any decals, which they didn’t, they couldn’t sell them to me by contract with Tamiya. So now it’s ebay time. Lets just say that I did find 2 Cartograf decals from Japan. One was $ 99 and the other $65 plus shipping for also nearly $100. Thenalso for $65 an original Tamiya sheet with shipping, and finally what looked like a copy of the Cartograf sheet from China. I passed on all of these offers. Then I came across a decal sheet for the Factory 787b Hi Quality decals from Geminimodelcars sold through Esey out of France with shipping for $27. Never heard of them before, but I was desperate. Decals haven’t even been shipped as yet, but the receiving date is June 5th, 5 weeks for just a decal sheet.

So now it’s stripper time using Denature Alcohol and then finish with Mr. Color Thinner which removed anything left with a Q tip. then washed everything and let it dry.

Same painting procedure with my primer followed by Gravity GC 1139 Ford Wimbledon White that came pretty close to the what looks like a off White in most pictures. 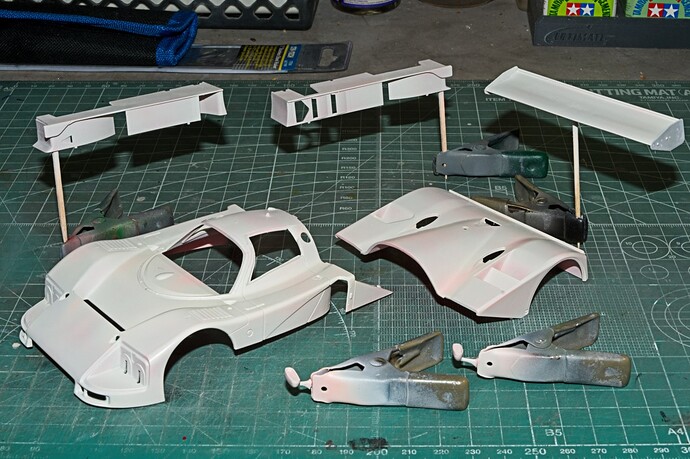 Like it! I am looking for the same kit, but they are helllishly expensive on e-bay.

Joel,
They’re insanely expensive, and all out of Japan. For me it’s the decals, I needed the Cartograf ones, but I’m not taking out a mortgage on our house for them. So now I’m hoping that the decals from France actually get here in one piece, and work like decals should. No one makes the Renown decals, even Indy Cal doesn’t and they have more single one of car/decals then I thought was possible. Just not the one I need.

Great introduction Joel for the kit. I may steal it for when I build mine.
The decals in the MFH kit come with the green sections as decals so no need to mask. You do have to do the fluro orange over white then place the green sections. I have some decent images of the actual car provided by MFH that were used as the basis for their kit if you need any information.
I guess from your comments that you are going to do a blue/white factory colour combo, is that right?

Michael,
Yep, that’s the plan to go with the factory effort decals: 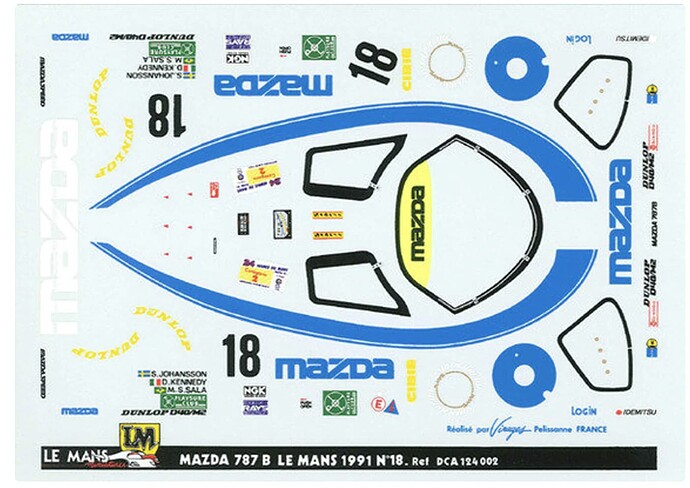 The Tamiya decal sheet did have all the green sections replicated as decals, but the decals are on the thick side, and almost all of them cracked and or just broke apart, so that option was out of the question. and like I said, the few sheets I found were so far out of realistic pricing that there just was no way I was going to purchase any of them. My hope down the road is for Tamiya to once again release the kit with those markings, or at least have some a AM decal company do them.

Glad that you liked my intro/history lesson. And you’re more then welcome to use any or all of it for your build, which naturally I’m looking forward to.

One thing I’ve noticed about my builds for the most part is that I’ve become more and more interested in building cars that I have a personal interest in rather then the kit build itself. So don’t be surprised to start seeing a few curbside builds from me to anything in between that has a interesting history.

Hi Joel, I agree with your sentiment about building cars that you’re personally interested in. I always need something to register for me about the build which makes me continue to push through and finish them. When I look at cars that I didn’t finish it is mainly because it didn’t matter to me.
On your decals, the “looking good on paper” is, as you suggest, never an indication that they will conform the the curves and shapes of a racing car. One the challenges maybe matching the blue of the decals to the rear wing for the white Mazda. I haven’t checked, but do Gravity do a Mazda blue or do you have a cunning plan to match colours?

Michael,
Everyday I check to see if my decal sheet was shipped as yet, but it’s still listed as not shipped. While I’ve got the whole detailed Tamiya kit to build with some extras along the way, I really can’t even start to look for matching Blue color paint. I’ve got 6 pictures of this car half which are clearly restorations which would explain why in one of them it’s heading down the Corkscrew at Laguna Seca, and one parked on the grass which looks like Pebble Beach. But between all the pictures, the Blue varies quite a bit. I’m forced to wait for the decal sheet and then try to match the paint color the best I can using Gravity paints of opened bottles of Blue and White. I’d go Gravity if they had the Blue, but they don’t. I could have them make it which is another option. but I have to supply pictures of the real car, not the decal sheet from some obscure AM decal company in France, or maybe they have the actual pictures needed. Maybe I’ll just send them an email, and see what the response is.