Also new from Tamiya, a Kettenkraftrad at 1/35 with trailer.

This is partial text from the full article (usually with photos) at https://armorama.com/news/tamiya-kettenkraftrad
1 Like
staff_Jim January 25, 2021, 4:13pm #2 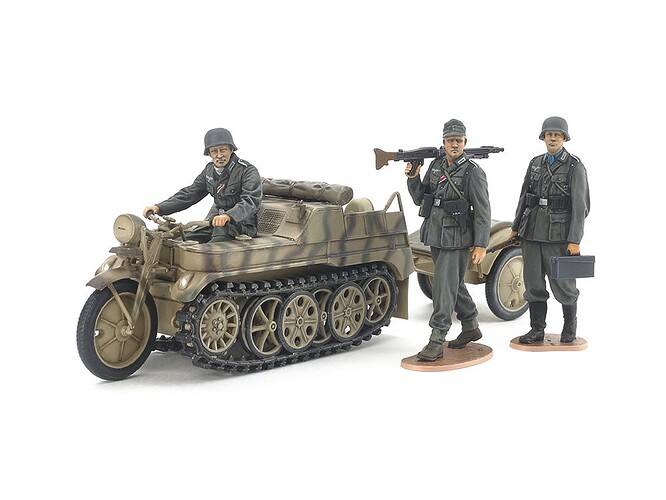 Also new from Tamiya, a Kettenkraftrad at 1/35 with trailer.

Wonderful improvement on their old kit, and the figures look really(!) good.

Oh so many kits and so little time…

This is just a mold freshen-up and not an actual retool, correct? I already have the original and Dragon’s Kett with the cable-laying gear and am not seeing enough to persuade me here beyond the figures.

Looks like this may be a new tool. The old one didn’t have an opening engine cover for a start.

Looks like I have found an accompanying vehicle for the Border model 109G.

I think this is a new tool. The original kit had a cast metal engine(!) and the engine cover did open, but the mesh was moulded on as opposed to being PE. Subsequent issues changed to a moulded plastic engine. The sprue shots show separate wheels whereas the original issue wheels and tracks were moulded in one. Finally the handrails on the back were open on the old kit but faired in on the new.

I might just have to get one of these; whilst I major on the Cold War I recall my late uncle (9th SS Panzer) telling me that he used to like driving these whenever he had the chance.

it all suggests a nice little vignette and would be a nice break (from Chieftains, Leopards, M60s and T-64s!)

Too late: already got a few of these a few years back from Dragon so the reason for acquiring just isn’t there for me. Nice to see more variety for those without the Dragon kits though.

So, I have to ask: is the Dragon version light years ahead of Tamiya or what?

I wouldn’t say light years, but there is more detail. However, it ups the complication of the build as the one I have with the cable-laying gear has indy links and pretty much all the suspension parts are separate–and those torsion arms are VERY thin. The kit is also 16 years old, so as someone said about Tamiya’s upgraded Pz IV Ausf G kit all they did was move the kit up to early 2000’s state of the art rather than 2020/2021’s state.

The Dragon kit is a pig. The front wheel doesn’t touch the ground if I remember mine correctly.

I’ve heard a few people say that, but of the build reviews I’ve seen (which admittedly are few) it is touching so I’m guessing it’s one of those Dragon things where the littlest thing out of place wrecks everything later.

I’m intrigued by your comment about your late uncle being in 9SS. As I’ve just bought and am reading Trang and Tiquets book I wondered if you had any other interesting anecdotes. I did try to message you, but for some reason the site doesn’t recognise your name.

Steve, if you send me your civvy email I’ll get back to you as some time ago I typed it all up - and it wasn’t that much - and sent it to my daughter, then serving in the Ukraine, not far of course from where he also served.

Anyone have an idea when this will be released? I want it.