There are times that my build order gets changed out of expediency.  After spending about half a year chasing down my ‘holy grail’ kit, the Ebbro Brabham BT18 Honda F-2, I found one of the few Tamiya F1 kits I never built, the Lotus 25, and my LHS at a good price.  The kit was opened but complete and came from a private collection.  Since both were to be painted British Racing Green, and frankly had minimal bodywork to begin with, I decided that I’d start both, paint the bodies at the same time, and proceed from there.

This is partial text from the full article (usually with photos) at https://automodeler.com/news/tamiya-s-lotus-25-coventry-climax---in-box-review
Joel_W January 10, 2021, 3:38pm #2

Bill,
I just read your review of the Tamiya 1/20 scale Lotus 25, and I just don’t agree with you with your review opinions.

There was no seat belts, lap belts, shoulder belts, or any combination of them used in F1 cars during the 1962 season. Here is a picture of Jim Clark driving the Lotus 25, and a restored version. There are no seatbelts in the cockpit. 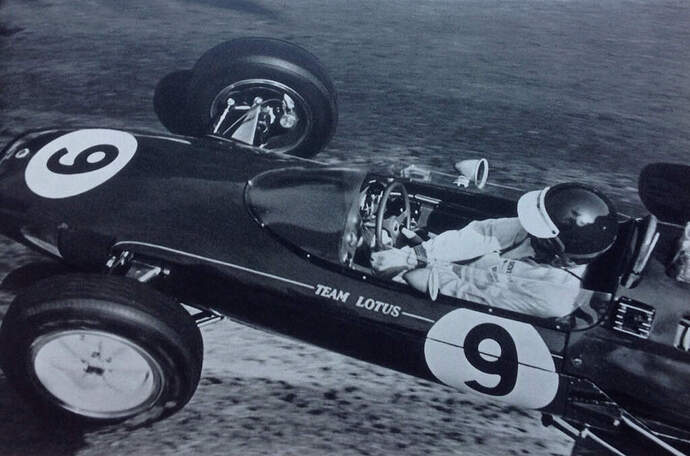 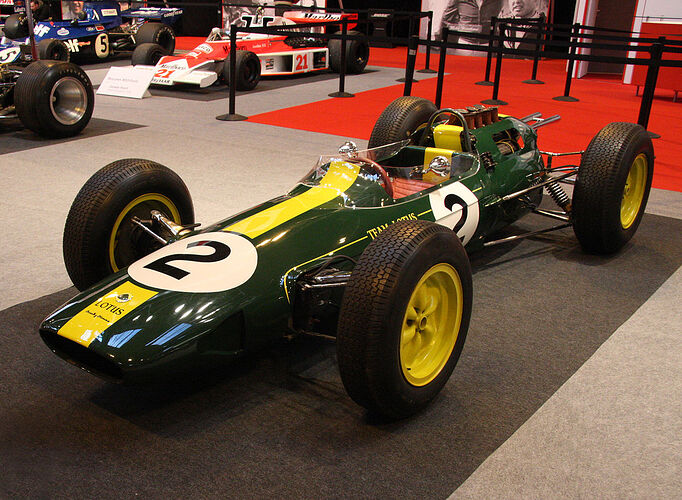 I built the kit and found the detail to be excellent for a kit molded in 1998, and is more then the equal of many of today’s race car kits.

I do agree with you that the mess protective screening for the fuel injection intakes molded in clear plastic isn’t up to today’s standards, but back in the 1998 era PE just didn’t exist, so it was this or nothing as colored plastic would have been worse.

Here’s my completed build of the Tamiya Kit. 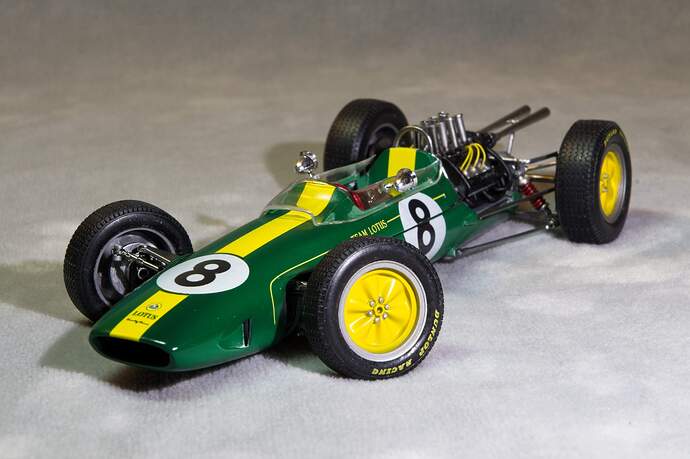 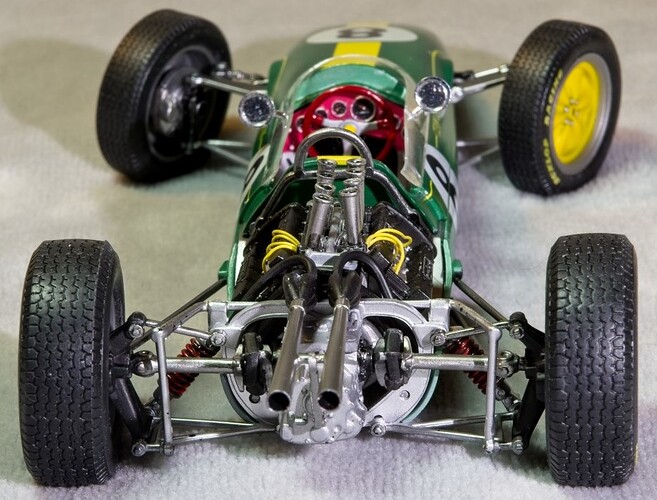 Great job on the build, and thanks for the info on the belts. Man, that is SO scary to think about driving that car with no belts!!! It may have a roll bar but that wouldn’t help very much if you weren’t in the car at the time! Can you please tell me what year they DID start using harnesses in F1?

One other thing: PE parts did exist long before 1998. They’re more common now, but they certainly did exist then (example: the grille on the Tamiya 1/24 Lotus Super 7). I wouldn’t think, actually, that PE would be a good solution; if I had a clue I’d take some fine brass mesh and form it over a buck into shape.

Bill,
After reading my post, it really was kind of strong worded, not how I wanted to convey my thoughts. Please accept my apologies.

As for not wearing seatbelts, I can attest to just how scary it was to race that way. My 1st time at Bridgehampton at drivers school in 1967, I was driving my MGB with just racing lap belts. As our speeds increased I was flat out down the main straight, lifted slightly for T1 but got on the brakes pretty hard for T2. I felt that I was being lifted out of my seat and pushed violently to the left at the same time. Every braking point and turn was like that. I had to get use to it, and adjust my driving style. The advantage to the lay down position does help a great deal.

most of the F1 drivers from the earliest times to 1972 when a harness was finally mandatory actually preferred being thrown out of the car rather then strapped in. The reason was one word: Fire. Many a driver died in a fiery cash, and the thought of being strapped in with a fire ragging was more frightening then being thrown clear of the car. The odds weren’t much greater living through that either. But some actually did. Just not if you drove a Ferrari F1 car. I forget what the exact year was during the 50’s, but they lost 4 drivers that year.

That is past scary. Question: 72, the harness was mandatory. But I know they started using them earlier. For my 1966 Brabham F2, would it be inaccurate to have belts on that car?
I drove a dragster for 20 years. I loved those belts and wore them as tight as could possibly be. Lots of guys wore them loose but if they hit something, man were they sore.

Bill,
The Ebbro Brabham BT18 is a fantastic kit. I built it, and loved it. I haven’t been able to find a single picture of the cockpit with any seatsbelts.

And yes, seatbelts and a 4 way harness was used by some drivers back into the 1930’s. They just weren’t very popular due to the fire issues.

I’m going to build the Lotus and Brabham sequentially. I’ll paint both at the same time; not that much bodywork! Also, I just ordered the Ebbro/Tamiya Matra reissue. I’m pretty pumped for that. I’ll do an in-box review when I get it. Thanks for the info.

Bill,
That’s a really great idea. I painted both my Lotus 25 and Brabham BT18 with Tamiya Gray primer and Gavity’s BRG.

As for the Ebbro/Tamiya 1/12 scale Matra, please do a build blog as I’d love to follow it from start to finish.