It has been a while but I have finally completed (almost) this 1/35 casting of Armor35’s fantasy figure Tank Girl. Tank Girl

She’s a fantasy figure so I painted the jumpsuit a fantasy green. 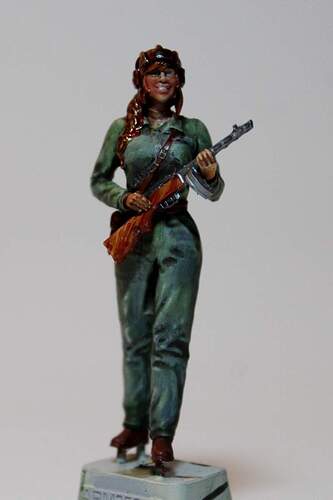 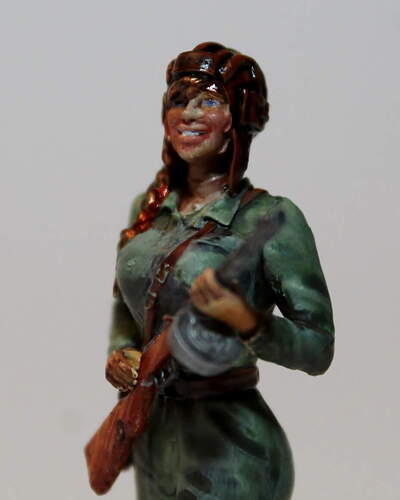 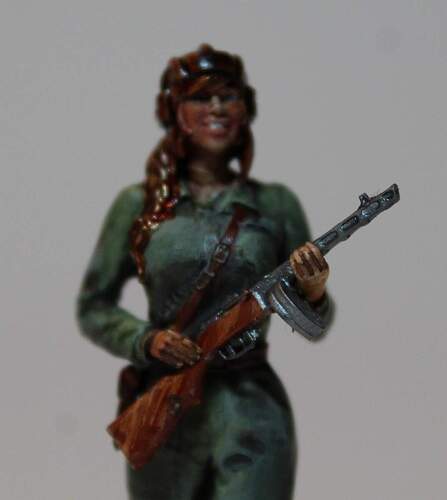 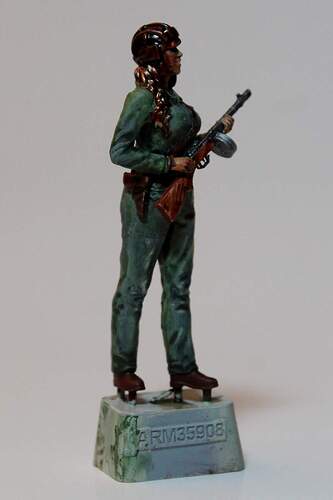 Her trigger hand doesn’t fit around the stock of the PPSh as well as it did in the review. Perhaps a couple of layers of paint ruined the tolerance?

Next step is to apply some satin and matte clear coats to kill the shine of some areas.

Dozens of Armor35 reviews can be viewed on the original Armorama here: Armor35 on Armorama

Yeah, maybe with the right hand with layers of paint. Did you try a little forceful cooperation?

Looks good tho. Waiting for the pictures after flat coats.

Hi Ks1 (tried to Wehrmacht-abbreviate it there),

Now that she’s out here, I will risk making the PPsh snap into her hand.

Hope to have the clear coats on tonight.

I have the same problem of my digital camera not taking bright enough photos, even with plenty of fluorescent lighting and spotlighting. Even with Photoshop, the tone and Brightness/Contrast didn’t enhance the photos that well.

I guess it’s the F-Stop and shutter aperture setting, but on Automatic Mode, those settings should be automatically computerized for optimum performance. Hmmm…

Anyway, I remedied this with using the digital camera’s flash…no other way around it.

Edited I must of composed this comment with my phone. Many of the words in this comment are not what I said (HARV can attest to how my autospellcheck screws me over). But I think you get the gist of what I was trying to say so, for fun, I won’t edit any of the original post, below.

Interesting. I actually shot these pictures under a hot light. My camera, Buckhannon, I shoot it with the auto settings. I think it’s been dropped on swivel 10 a few times because it does strange things. For instance, on automatic Zone, in a dark room The Flash will not trigger. However, and bright daylight when I’m trying to shoot something, often times the flash pops up and shoot. It’s like it’s Bass ackwards

Thank you for sharing the pictures Fred. A guy can’t help but love a woman with a PPSH-41 submachine gun.