Tell me about Sector 35 tracks

Popped up on Amazon today when looking for something else. Tell me about them. They look like metal tracks that are already assembled? Do they come with extra links and can you remove links if there are too many? I can’t find a website for them…

Looks like some tracks are already assembled indeed, whereas others are not…

Phil, it’s not much help but someone here in one of the threads was talking about these… They ordered about 6 sets as they come ready assembled and were slightly cheaper than other metal tracks, especially when bought as a multi purchase… It may be worth trying a search in here for it ??

No problem. Maybe @Armor_Buff could give us some more information on them if Phil needs it. I have thought about them a few times.

Yes, I ordered six sets of Sector35 tracks from Plastic Model Shop in the Ukraine

Let me take a few pictures of the Sector35 products beside similar type Fruils and I’ll post details.

Some sets are listed as assembled and others sets list as require assembly.

The assembled track runs are a link or two short and the modeler adds the extra links as needed. 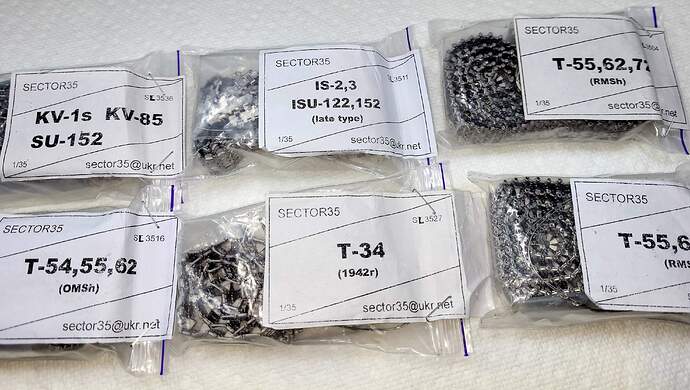 The order turn time was about nine or ten weeks if I recall correctly. That was basically because it was such a big order. I ordered seven sets the odd one out being the Sdkfz 251 half track tracks as you probably noticed isn’t pictured above.

Around the six or seven week mark, I got uneasy and contacted Plastic Model Store because I was wondering when my order would arrive. TPMS replied in a timely manner. They explained the hold was the 251 tracks otherwise the order was ready to ship.The 251’s had shown available on the website when I ordered. In all fairness not every mom and pops small business can do real time inventory online.

1)I could get the six sets available and have the 251’s go on back order.

About two weeks later the six sets arrived at my door.

Excellent customer and experience. If an issue comes up talk with the Plastic Model Store and I believe they will treat you right.

So day or so later I put my second order in for eleven sets.

In other words, I’ve had it with Fruil for now after like 25 years of being a supportive customer and voted with my

After cleaning up FOUR sets of new nasty Fruil track links in a row and having to deburr or redrill or drill 95% of the links, I’m done until Fruil fixes their issues. Each newer set seem actually worse than the last.

This is what comes in a Sector35 package. Two runs of completed tracks. They are handed. Five or so extra links are provided for each track. Aluminum wire is provided for adding links if/as needed. 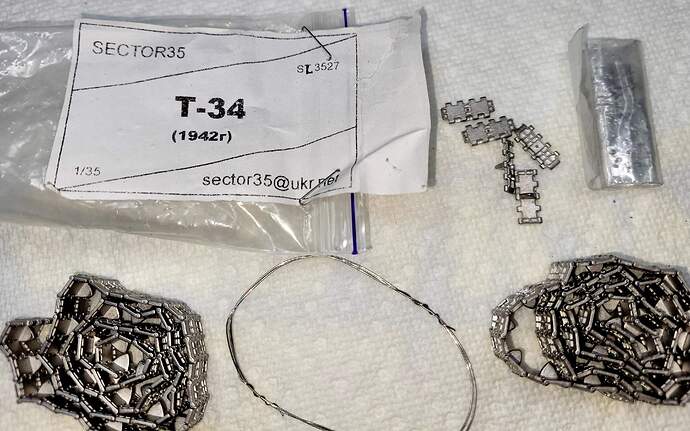 Close up of track detail, inside face and outside face. I think they look excellent. 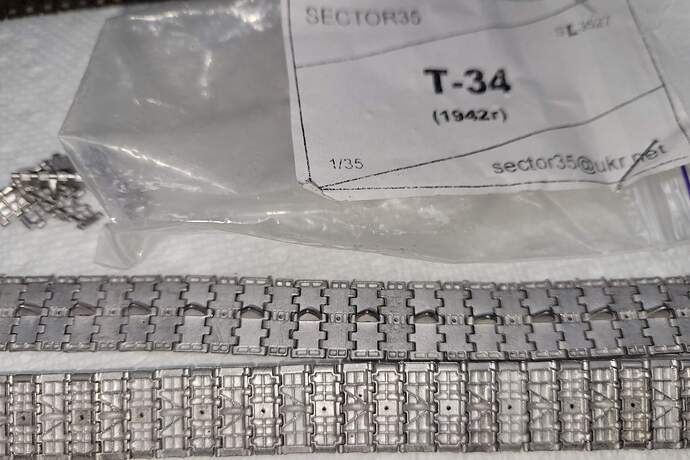 The Fruils are T-34-85 tracks and a different style. They have also been treated with Blacken-It (discontinued) to weather with rust etc.

Close up side by side. 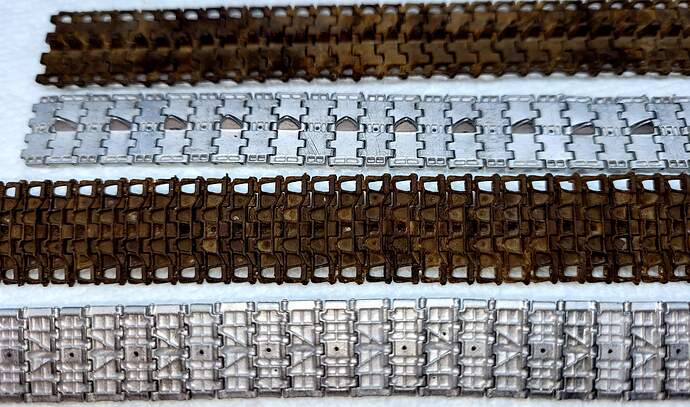 Is there another one of the Sector35 sets someone would like to see in more detail?

Thanks for taking the time to photograph all of that! They look great.

I keep toying with the idea of doing a Tiger. It seems that most of the Tiger kits are let down by their tracks so I’m thinking going aftermarket is the way. This might be the solution.

I have used a set of their BMD tracks and was pretty happy with the result. The set contains separate links to assemble. This was not a lot of work considering the size of each tracks. The only issue I had was the fit around the Eastern Express/Alanger sprockets and return rollers because the guide teeth were a bit to long. I got the same issue with a Zvezda sprocket.