The 5th Wiking Division in Action by Artur Wałachowski | Armorama™ 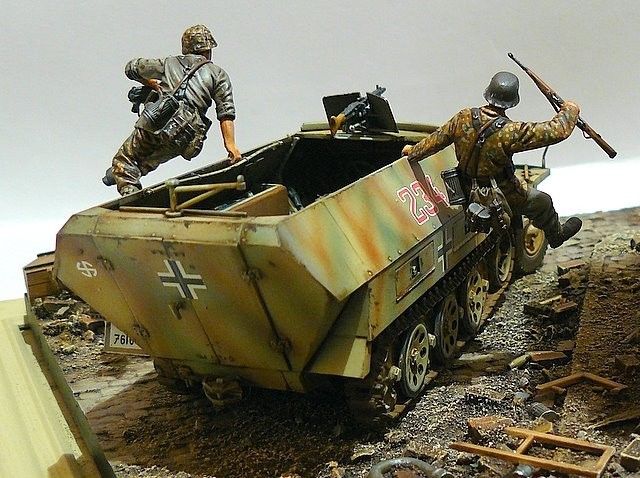 This is partial text from the full article (usually with photos) at https://armorama.com/news/the-5th-wiking-division-in-action-by-artur-walachowski
4 Likes
creading August 26, 2022, 9:15pm #2

Where is the driver ? Love the overall debris/groundwork/building and painting but it seems like the armored troop carrier has just arrived in the fire zone and the troops are disembarking to assist the (soon to be dead ) grenade throwing guy. If he’s close enough to toss a stick grenade at the enemy he really should consider some type of cover.

Agreed; the individual elements are extremely well executed (except maybe the floor of the upper storey inside the building) and beyond my skill level but the composition is lacking something.

Yep, the scene lacks any logic in my opinion. It makes no sense to jump over the sides if you are facing the enemy, and there is no one firing the MG…

There is a known photo of soldiers leaving the vehicle as that, which was probable the base for the Tamiya set, but that should have been a training session.

I get what you guys are saying and I agree. I still have to give the modeller credit though for the dynamic ‘in action’ poses and setting. The uniforms and groundwork are also nicely painted and detailed alongside the halftrack which is also well modelled.

The only other bit I think needs some attention is the wall-paper- it is quite nice in terms of contrast and the way it is peeling off the walls but if it had been exposed to the elements (not to mention dust and dirt from the destruction of the building) like this for any length of time it would likely be a lot more dirty than it is.

I’m currently working on a diorama using the Tamiya figures but am using the jumping figure over a fence instead of over the top of the half-track.

Yes, like the rest of you have to give credit to the modeller for the painting and detailing, but the diorama raises as many questions as it raises. Why is the grenade thrower wearing Panzer uniform and why is there a dead crewman in the building? Where is their vehicle? The standard panzergrenadier section was 10 men, what happened to the others and the half track crew? I feel if the rear doors of the half-track were open and other guys bailing out of there, that would justify the other two leaping over the top and if additional crewmen were either hugging the wall firing, or supporting the grenade thrower it would make more sense. Also why does the half track have one number plate on the front and a different one on the rear?

Quite. An MG is pretty nifty in those cases.

Beautifully executed though, quite inspiring!