Your stick-to-it-ness is impressive.

I’d probably have painted it gold and stuck it on a shelf in the officers lounge long before now. Maybe that’s where all those gold models in the shows came from.

It’s going to be impressive when it’s done.

They were indeed AMT kits! Certainly the ones in Picard’s ready room in First Contact. Sanded completely smooth and gold leafed only for Patrick Stewart to smash them!
The set of Sisko’s office had a Reliant converted to the Saratoga and an old Daedalus class ship, which probably used parts from the old TOS Enterprise kit.

The DS9 effects department kitbashed a lot of ships for background models. They just let their imaginations run riot. That’s how we ended up with a Voyager hull, stuck to a Maquis raider with Constitution refit warp nacelles!

Thanks Peter @petbat , colin @Colder & @brekinapez … it took a bit longer than hoped handballing it all apart from the initial airbrushing of AK Cam Grey, but masking it would of been a complete mare, and I would be in a straight jacket by now lol … There are still some random areas of slipped brush lines but I am hoping that the decals will take the eye away from those bits once they are on. I need to retouch some of the Camouflage Grey thin lines on the inner side of the phaser array banks as they stand out but fairly happy with how it looks at the moment. There are also 3 sections on the upper saucer that need new Cam grey on them as the tamiya grey bled through … Live long and prosper dudes

Ok. Now this is the dilemma of all dilemmas… Bear with me … 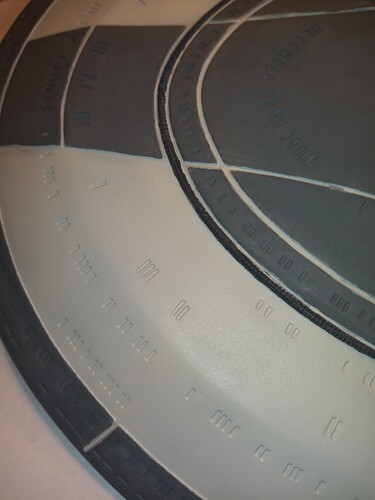 As you can see, lots of what I presume to be windows/viewing ports whatever you want to call them … All very plain and uniform… Now the dilemma

I have done a test area with a small section of them painted in. As you look at it, left of the sprue is Tamiya smoke, to the right of that is flat black and some in Molotov liquid chrome… 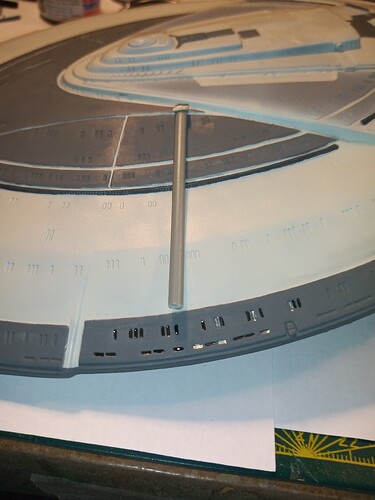 And with a bit of distance… 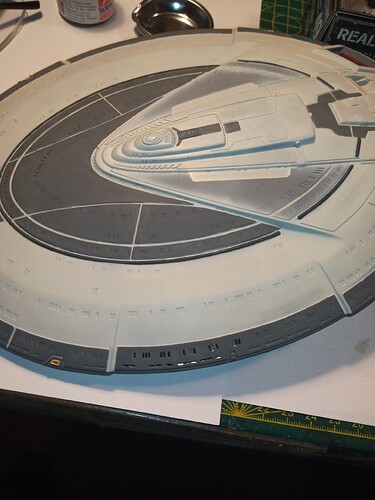 What are others thoughts ? I am going to do them, I’m just not sure whether to go with one uniform colour or a mixture ??? All input appreciated chaps.

And just so you know, altogether… there are approximately 1150 to paint.

Hey, at least you aren’t drilling them out.

Lol… There’s always a bright side

…what are thoughts ? Smoke, black or a mix ?

I like the look of them. Maybe a mix would be realistic. Gives the impression of some quarters and rooms being unoccupied. Can you paint the Tamiya smoke over the chrome? Might add another subtle variation.

Ideally it would be a mix smoke and black. I think the chrome is too bright but I get the idea. Like maybe chrome with smoke/wash on top of it.

Thank you for potentially adding to the work load

Tamiya smoke over the chrome?

And as Ryan said, I was thinking that would tone the chrome right back as it is very bright… But I also like the smoke and black mix …

I would also add in a blue black mix. I would also switch out black as too stark the other direction from chrome. Use a dark grey or rubber black. The variety will give it a life of it own and also put you in the funny bin too.

For what my opinion matters, mixed, to me it looks like some windows are lit, with the others unlit.

Going to test the chrome tomorrow with a smoke top coat to tone it back a bit, or at least see how it looks …

It’ll be worth it!

i used a mix of GSI MR.Color clear smoke and clear blue in my Blockade runner and i am pretty happy,I applied it as a pin wash,if you can make couple of different shades can give a nice effect in my opinion

I will try that tonight as well. Thanks mate

1150 windows. That’s slightly insane. Painting them? That’s totally insane. If it were me, and it were my model, I would do all the windows, but I would cheat, cheat, cheat.
Go down to the art store and go to the marker aisle. Find the technical pen markers. Buy a 01 or 03 point pen. Then color in all the windows with the marker. The fine point will fit the window slits perfectly and the ink will fill the window without overspill. Total time: about .5 seconds per window. Bing bang boom. They’ll all be black, but you’ll get it done in 2023.

That is actually a very good plan … like your thinking Batman

I found a fine liner tech pen, and mixed some smoke and clear blue… Not sure I like it, so it may not work for this …

This is a mix of the blue/smoke mix and the tech pen. 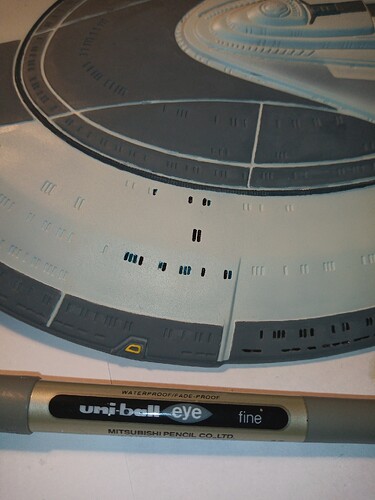 This smoke put over the Molotov chrome 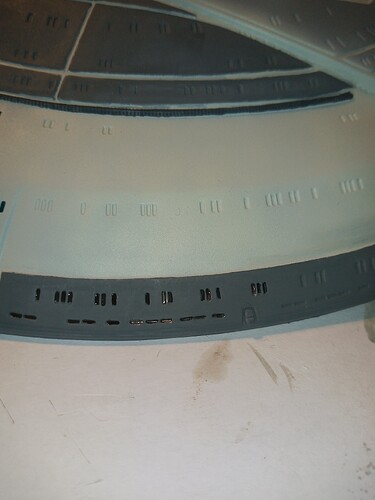 And this is smoke on the Camouflage Grey areas. 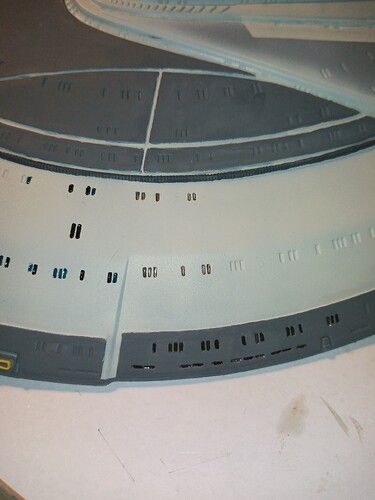 So… On the Cam Grey areas I have opted for a mixture of neat smoke and tech pen.
For the Kure Arsenal grey areas I will use the smoke and the tech pen and chrome and with a smoke covering

The Molotov chrome has now been applied to the ports. 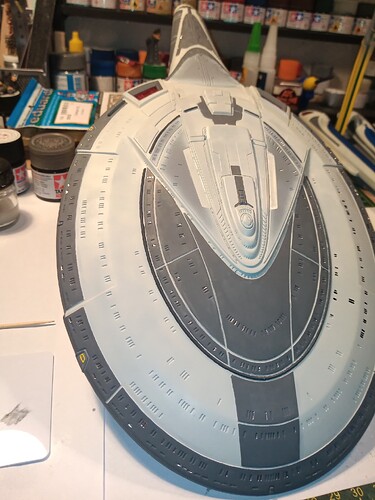 Will make a start on the Tamiya smoke. 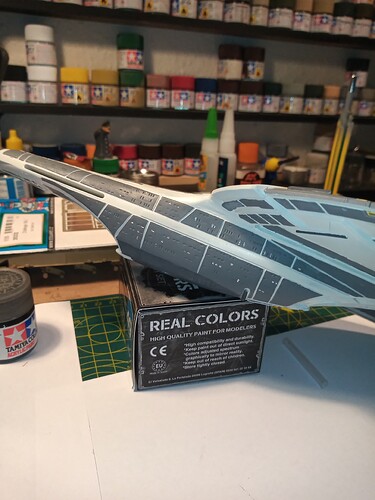 Once the smoke is dry, I will then top coat the chrome with the smoke to dull it down, then leave the fine line tech pen till last as that will need a long dry time