Before I did this model I had been away from the bench for around a year suffering from a serious case of modellers block.

Seeing this AK release gave me a bit of inspiration and (among other things) gave me a good drive to get back into the swing of things.

I also tried out a relatively new paint range from Scale75 called ‘Artist Smooth Acrylic’. It was interesting to use as I mostly go with Vallejo and Andrea but I found the new paint a fairly straightforward transition although I’m still getting to grips with it as you can see in a few areas where I have left brushstrokes or mis-judged the consistency. 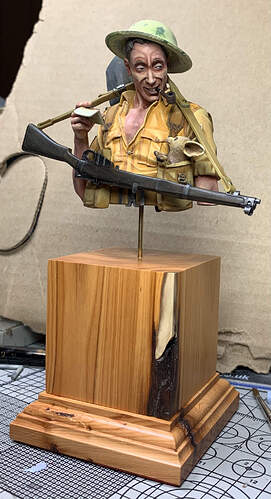 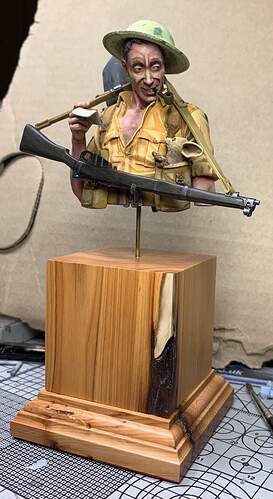 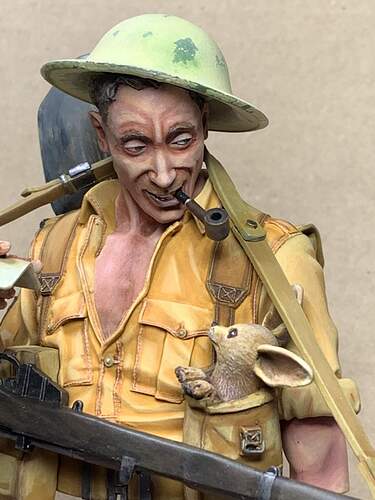 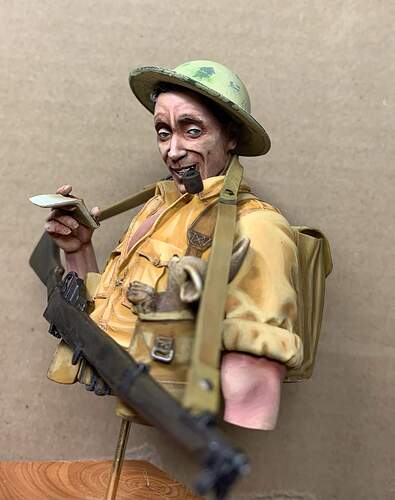 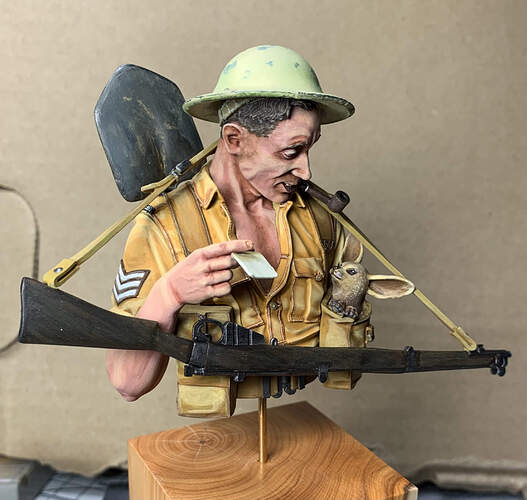 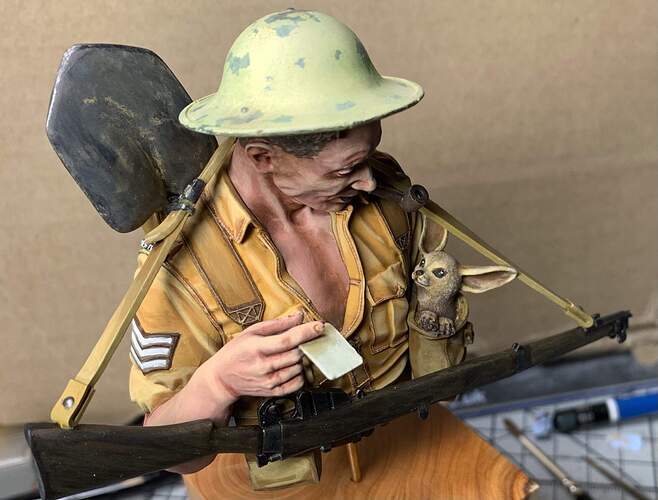 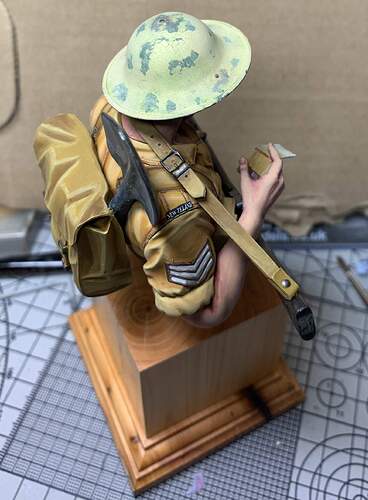 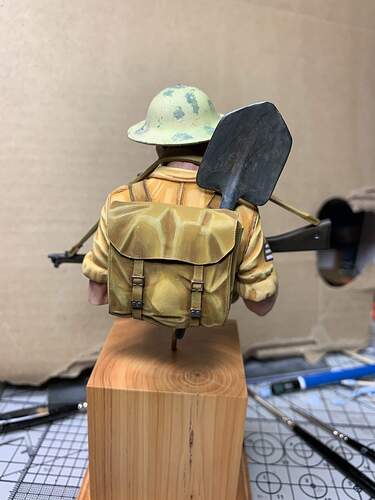 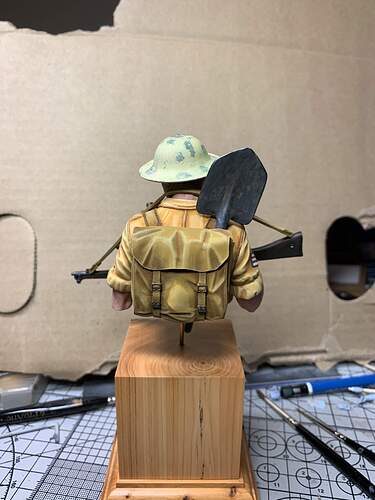 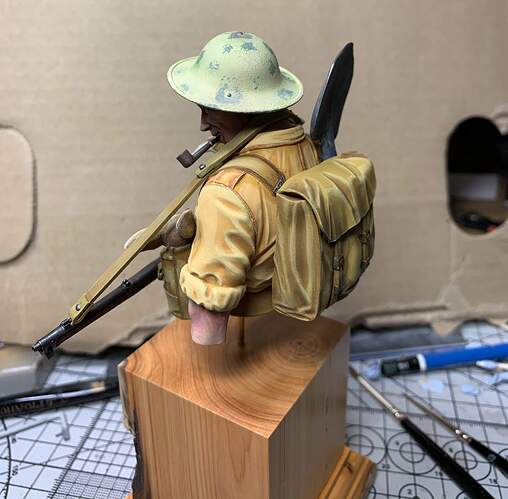 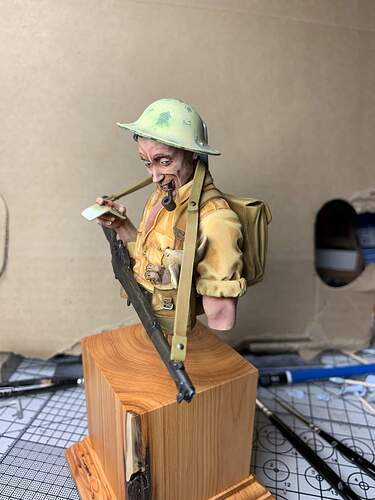 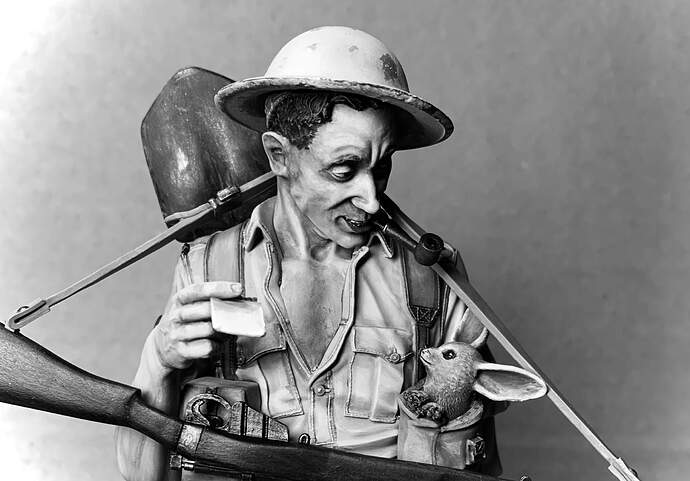 As you can see the helmet was done with a chipping fluid which kind of went wrong and left an effect more like a crackle medium on some bits but I thought it was acceptable as it made the sand colored coat appear baked by the heat which I thought was somewhat appropriate for a desert rat!

Some of you may have seen a discussion on Planet Figure about this bust.
https://www.planetfigure.com/threads/the-desert-fox-forthcoming-release-25-6.256150/

a few issues where highlighted and they are worth discussing here I think.

One of the issues was the positioning of the rifle (likely depicting an SMLE Mk 3) sling forward attachment point. It is too far up the rifle and should be further back than where it is- underneath the foremost metal band is the correct position. The sling itself was also talked about- it is quite thick and perhaps out of scale. However it is very solid, has good attachment points and is already bent to position so in my book it is good (thin slings on figures cast in resin can be very brittle, prone to breaking and difficult to position at times).

The 37 Pattern webbing equipment also seems off in two respects. One is the raised stitching running around the shoulder straps which does not seem to be present on any webbing examples I have seen and the other issue is the ammo pouch closures- they appear to be a squared off clasp whereas 37 Pattern ammo pouches usually have a metal button fastener.

The shape of the helmet was also discussed but I can’t see a problem with the shape myself. These are minor issues, it has to be said, but worth mentioning nonetheless.

There are probably one or two other minor errors or issues here and there but for me the positives of this release far outweigh the negatives. Very little clean up is needed oob and the casting is first class. The attachment points for parts are also excellent- no filler at all was needed for any attachment area and the parts fit was perfect on all parts- even small tricky parts like the rifle sling.

The only issue I had was the pipe breaking as I tried to inscribe a line where the bowl meets the mouthpiece as with most pipes they break apart at that point for cleaning. However a little extra superglue made a nice neat line at the break which solved the issue - very much a ‘happy little accident’ like Bob Ross would say!

The thread on Planet Figure also nicely included what is possibly the inspiration for the bust, that of a New Zealand Sergeant in North Africa.

Thanks for taking the time to check this out. Questions, comments etc are more than welcome.

Man, that looks Great! This almost makes me want to paint Figures! The high light is, the Desert Fox in his shirt pocket! Thanks for putting a Smile on my face.

Thanks @Ronnie_Burns for stopping by. Glad the figure put a smile on your face- when I first saw it advertised it made me smile too and then I knew I had to buy it!

You should definitely try your hand at figures though- busts in particular can be really enjoyable.

Hello, I think you did a good job on this and it’s always difficult to gif critics, tips ore compliments by watching photo’s.
Overall I like always someone that is not complete copy the box art, but is trying to bring in something personal. The interaction between the eyes of the man and the animal are just great, the face of the fox also. Not always easy to bring in some character, you have achieved that for sure.
The blending between the colours looks a little bit to hard, but as I said it’s possible just the photo.
About the range of colours of Scale I’m using these mostly always with a wet pallet. I just love them because of there mat finish, but for skin parts it’s just that little bit to flat.

Thank you for taking the time to reply Jan- I always appreciate constructive criticism. This was my first figure using the Scale 75 and as you pointed out my color transitions need work.

One thing I didn’t think about was the skin tones being very matt with the Scale75 paints. Now you’ve mentioned that I think I will experiment a bit with them, perhaps introducing a little satin varnish.

Again, thanks for taking the time to leave your thoughts on the figure Jan, they are much appreciated.

Must have missed this one somehow. Full of character. Really nice!
G.

Thanks G- the character is what drew me to this figure when I first saw the release of it- the sculptor really did a fantastic job.