The effect, or rather non-effect, of stand-off armour/skirts 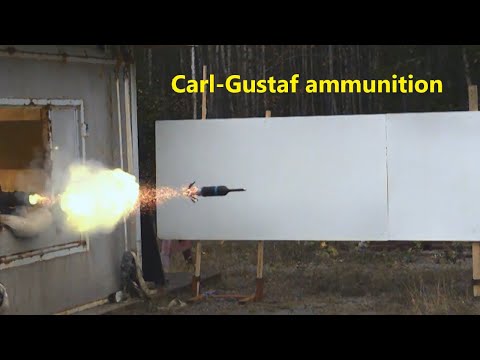 Notice how the penetrating jet also punches a hole on the other side
of the target and also a hole in a witness plate, at least 7 or 8 meters,
maybe even 10 meters, behind the target.
The target is a retired BMP-1 (the BMP-1 Ost we bought from Germany
and used for a while) so there isn’t a lot of armour. The point is that the jet
is still active after the first stand-off armour (right side of BMP-1), punches
through the second layer of stand-off armour (BMP-1 left side), travels
across the stand-off distance of at least 7 meters and punches a hole in
the witness plate.
What is the probability that some sheet metal a foot or two from the armour
would stop this HEAT round?
Thicker armour and ERA would probably do the job if the HEAT round hits
where the armour and/or ERA is located.

The Wiki page for the Carl Gustaf 8.4cm recoilless rifle includes a table of similar weapons. According to that table, the Chinese PF-98 has twice the armor penetration, twice the range, and twice the sighting optics of the Carl Gustaf at about the same weight. If those statistics are correct and I were in charge of a military, I would immediately copy and manufacture the latter, then light a fire under the junior officers who work on such things to come up with something even better and cheaper.

Ammo: My calculator says that 7.91 divided by 1.70 equals 4.65
Launcher: CG M4 weighs in at 6.6 kg, the PF-98A weighs in at 7 kg
More explosives + more propellant charge.
Twice the range needs twice the optics.
Both weapons are essentially unguided, the sighting systems “only” assist with the
initial aiming but no guidance during flight.
There is however one laser guided projectile for the CG.
The chances of a hit goes down with increased target range, especially if the target does not
continue moving at a fixed speed. PF-98 has 310 m/s muzzle velocity so 2.6 seconds flight time.
A tank moving at 50 km/h moves almost 14 meters during that time or two T-72 chassis lengths.
The max speed for a T-72 is 60 to 75 km/h, the Abrams manages roughly the same.
Moving targets is difficult and long range just makes it worse.

The needed range is a design requirement based on the expected combat ranges.
Sweden has a lot of forests with small open fields so 800 m would not be very common.

That is the table. Yeah. Please keep in mind, I have no prior knowledge of these weapons (that I remember) until you brought them up.

According that article, United States military uses the M3E1 Carl Gustaf in large numbers. China is a peer competitor of the United States. Unless the PF-98 costs drastically more than the M3E1, it seems foolish to procure a weapon system allowing an enemy to engage my troops almost half a kilometer before my troops can fire back.

You bring up a very important point about the weights of the different systems and engagement ranges. The larger warhead of the PF-98 necessarily makes it much heavier. The Chinese must rely on one person to carry the launcher and another to carry the ammunition. They have a lot of people so that makes sense for them. It may not make sense for NATO countries.

Further refining requirements, I would detach the sighting system from the launcher, making it something I can plug into any weapon available to my infantry troops. The launcher becomes very dumb and very cheap. Where possible, I would move the warhead electronics to the sighting system, now making the warhead cheap. It appears these weapons already launch many different types of ammunition, so it makes sense to develop rounds with different ranges and charges and weights. Finally, I would make really good sighting systems and cheap sighting systems. The really good sights go to whatever unit needs them. The cheap sights go to everyone else.

Edit: With regards to hitting moving targets, I feel like rapid advances in technology continue to chip away at that problem. If I put the electronics in a separate sighting unit, I can keep upgrading those without fiddling with tubes and warheads. The current war in the Ukraine clearly demonstrates the efficacy of man portable, guided missiles. (A ‘drone’ connected to a sighting system is really a guided missile.)

All that written, I would always want my guys to have the engagement advantage over their guys.

The Swedish GRG-team is two soldiers, gunner and loader. The loader loads (obviously), makes sure the backblast area is clear and carries 4 rounds. The gunner carries the launcher and fires it.
Extra ammo-carriers can be assigned if a target rich environment is expected.

In a Swedish forest we will be really close before we can be fired at, 100 meters would be long range in a forest. Open fields in China or Ukraine would easily have combat distances at 800 m or more. Swedish forests and forest roads is more or less similar to urban fighting, awfully dangerous for vehicles.
The CG can hit moving targets at 350 to 400 meters, static targets at 500 meters and high explosive reaches out to 1000 m but I presume that would be larger targets.

trust me! A 75mm recoilless rifle will smoke an M60 tank. A 90mm would almost be overkill.
gary

I suppose it once again comes down to the combined arms thing when fighting on the offense. Send forward your reconnaissance assets until they make contact with something. Determine the nature of the something. If you find a bunch of guys with anti-tank guided missiles, back off, have the infantry get a fix, then hit them from long range with high explosives. Do not drive the your armor into the thing designed to kill armor. I guess I am just weird thinking stuff like that.

What offensive armies need is a super cheap, unmanned, fast, easy to repair, reconnaissance vehicle to flush and spot the enemy, moving ahead of the tanks. The powers that be are definitely working on those. They are also working on ways to kill the spotters. The battlefield of the future is going to look like the playground of really rambunctious children with little broken plastic vehicles everywhere.

Edit: Once again, a forum thread on Armorama has me reading about this and that instead of running my airbrush.

A scout drone. with IF and thermal cameras.

At the time stand-off armor worked (or at least helped) as there were no delayed detonation fuses and most all AT rounds were based on applying direct explosive power and hub penetration. And not with spraying the insides of the vehicle with hot molten steel.