Lol, that’s gonna leave a mark! Some more progress, tracks and pioneer tools painted( yeah, they should be olive drab but I like the contrast), suspension on and ready for decals, weathering and (ugh) tracks! 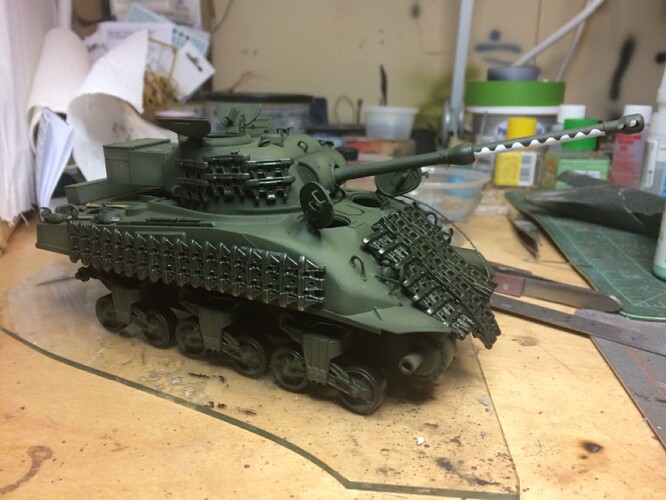 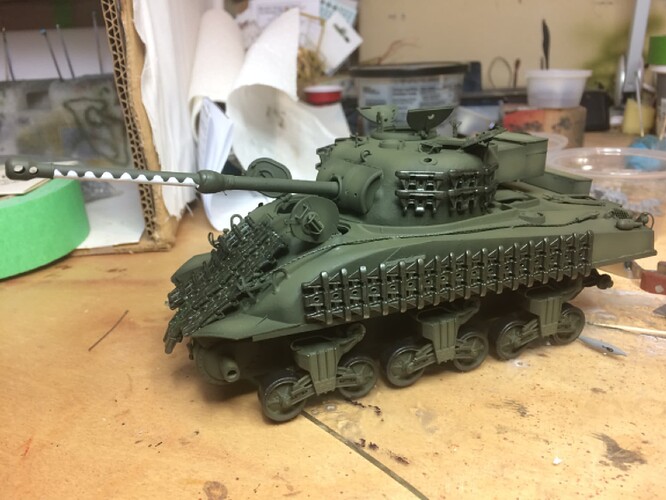 This is looking really nice! I like the choice of paint on the tools. I always do them in wood and steel and as good point out it add nice contrast.

What color/technique did you use on the Churchill tracks? They look fantastic! I really like the metallic tone

yeah, they should be olive drab but I like the contrast),

I’m also a fan of the contrast colour tools Colin. That and painting the ammo boxes and jerry cans every shade of green in my arsenal other than OD.

Somewhere there’s a basement (that’s what a group of them is called, a basement) of rivet counters vibrating at around 10k Hz in horror at the lack of authenticity, but you need something to make them pop a little on the shelf.

Thanks! I just brush painted them with Tamiya steel. Will give them a few washes with rust and some light rust pigments to tone down the shine a bit.

Nope. No excuse. Tools should always be OD like the rest of the tank… just like my Stuart… 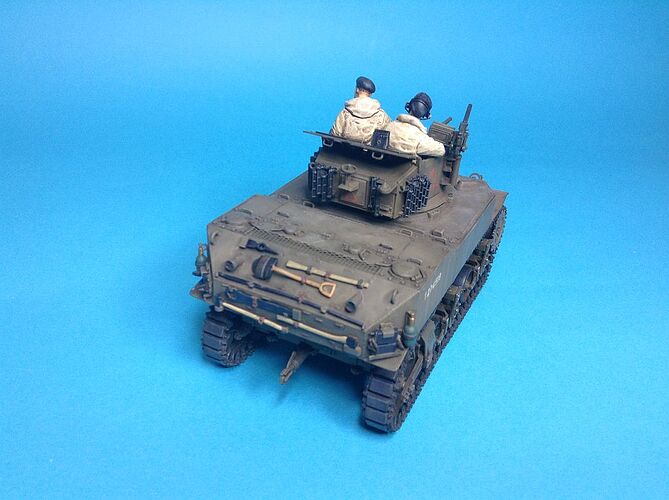 If they can chip a tank to an inch of its life, artistic license on tools should not raise an eyebrow.

With the spitfire build going up in flames I decided to crack open my accruate miniatures mustang. I am building it as a MkIA flown by a Canadian pilot for an RAF squadron on d-day. I decided to build all three of my AM mustangs, as they are similar kits, but I’ll be doing each in a different scheme. The log for that is here

Mustang Mania. You can build anything as long as you call her Allison Aircraft

Two big tasks of the day, priming and starting on the instrument panels. For priming I like to prime with badger stynlrez grey, and then do an irregular black pattern over top to add some tonal contrast. [image] The instrument panels on these kits are clear. You paint the background while leaving the dial faces on painted and then put the decals on the back side. I masked the dials with white tack and then primed in gray and painted flat black. Masked vs unmasked [image] Painted [image] …

Just finished the black detail painting in the cockpit, tomorrow, red, white, and steel followed by a silver dry brush! 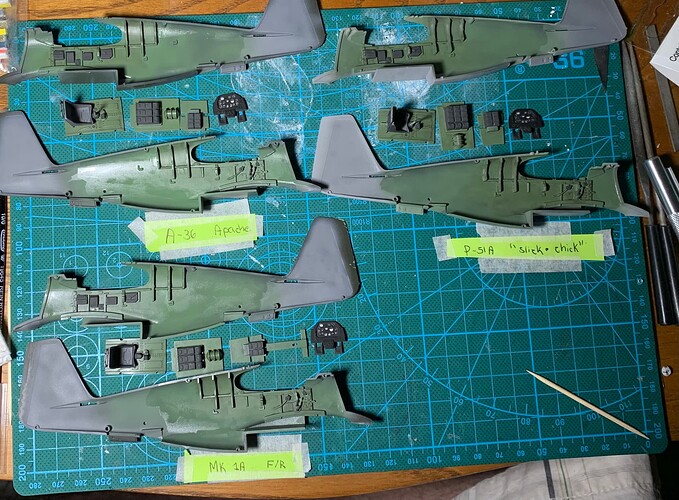 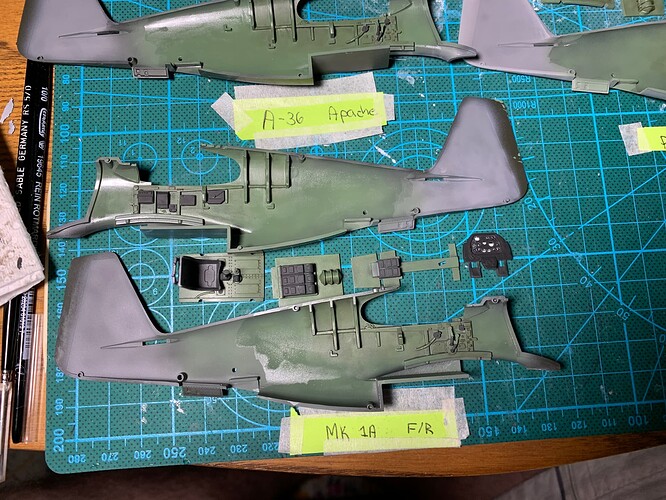 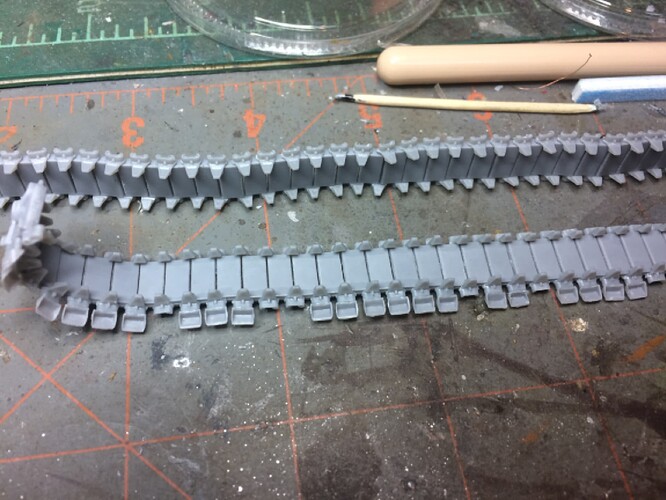 Some work done on my TUA, I got these nice Duplicata production flags yesterday so I put them to good use. The antennas are guitar wire. 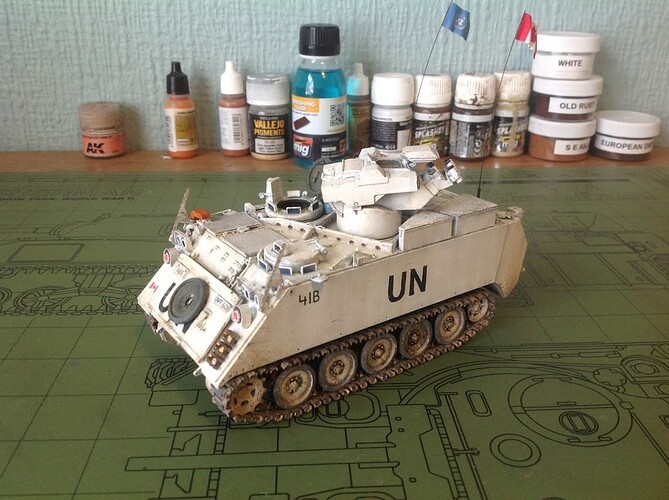 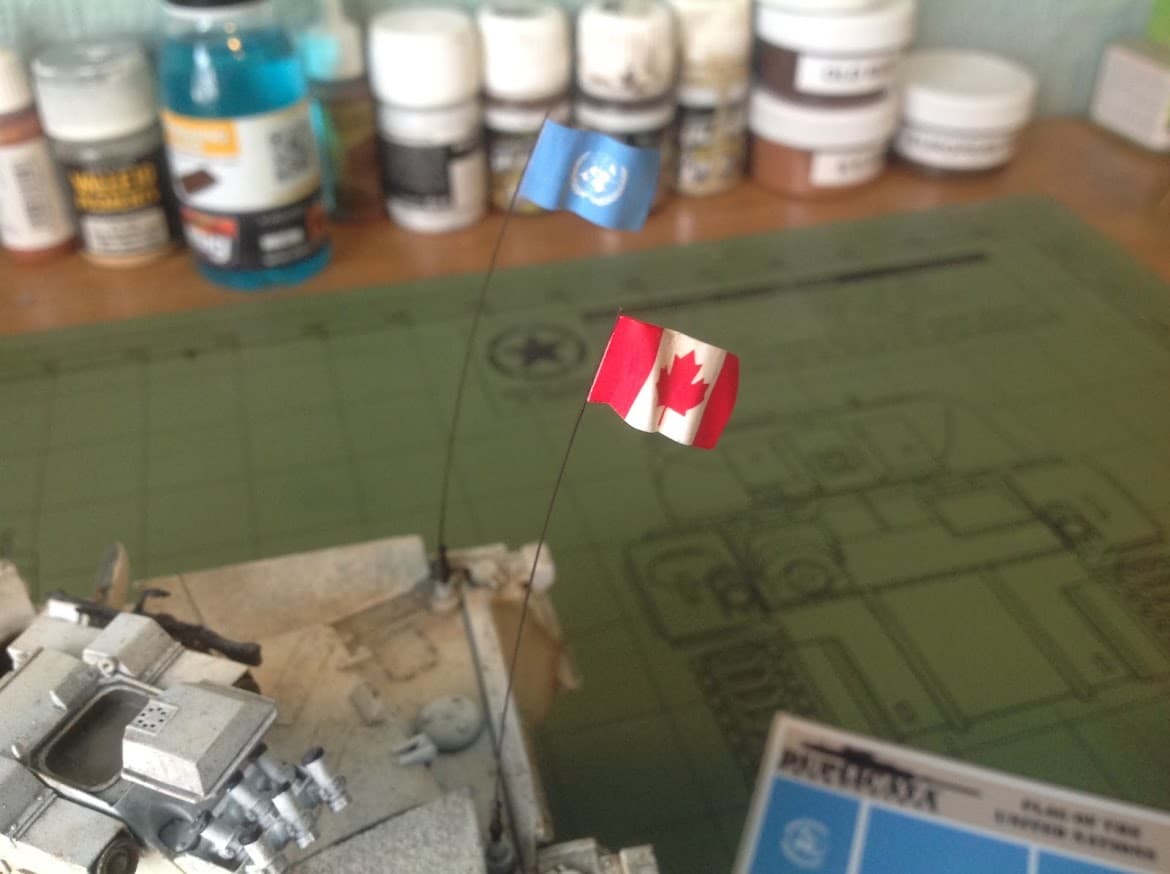 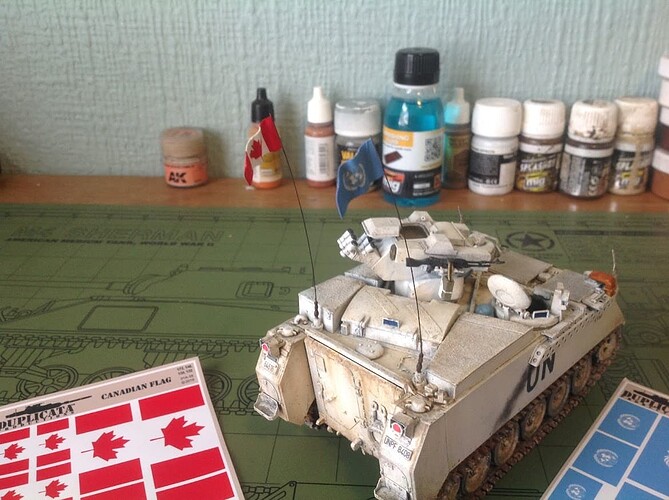 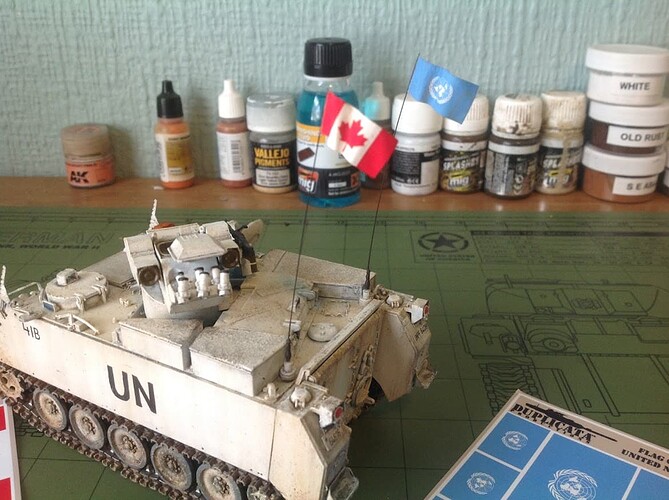 And I also added some dried grease stains to the roadwheels. 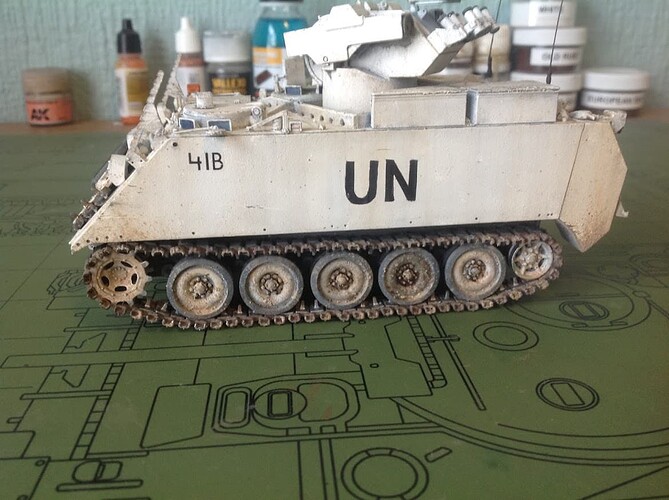 And some soot from the exhaust as per my references using Danger Close black pigment. 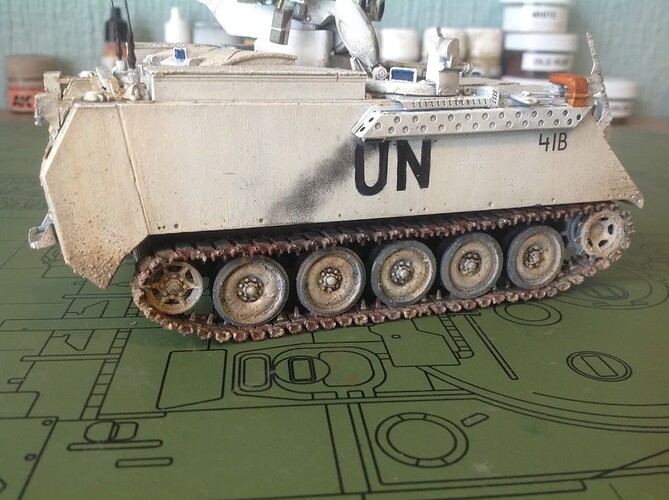 Next is wet fuel and this build is done!

(Yes final pictures will be done on a nice background.)

Looks really good!
Hope to start building again after next week… see if I can finish that Grizzley…
Your build reminds me that I have to get UN and Canadian flags…

That looks really good, Ezra! And as Sheldon Cooper would say… “Fun with flags!”

Looks great with the flags - join a dimension to it.

The base for it done.
The TUA itself isnt finished, but the base is. 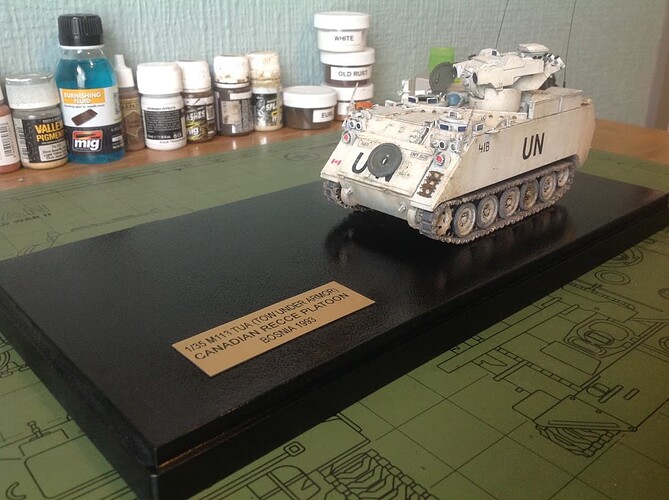 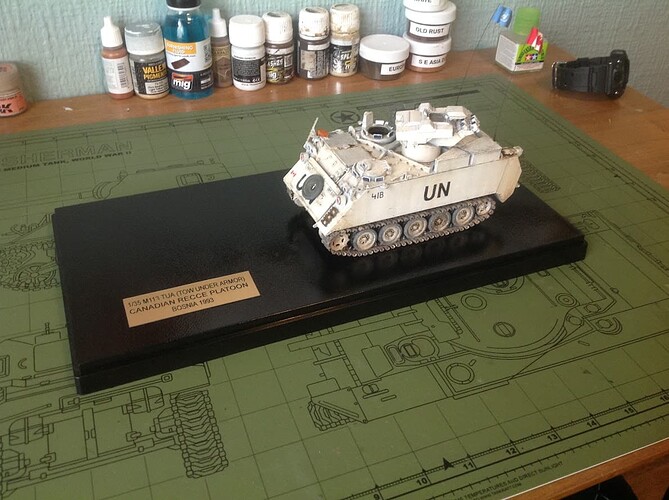 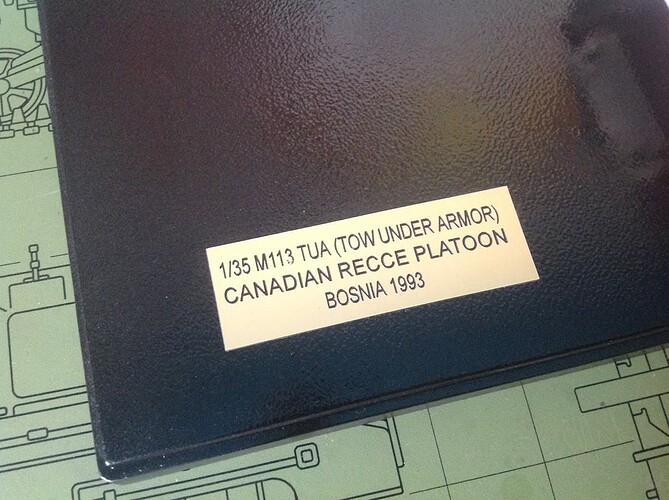 Looks excellent! In my limited experience, white is very hard to weather and keep it subtle and realistic, and I think you nailed jt

How/where did you make/get your plaque?

@Canmedic I got the plaque custom made at trophy depot Additional Engraving Plates the price is really good and there have alot of sizes. Plus on most of them getting the engraving is free.

Do I still qualify with this built (Resurrected! Braille Scale canadian Leo in A-Stan - #7 by panorama) started years ago? It would probably help me to refocus and get some progress done.

Just noticed this on eBay. I know some people were envious of my Avro CF-100 kit. One is for sale on eBay now. Not my auction just wanted to share since this is obviously relevant for this campaign.