The "Other" Russian Invasion Of Ukraine, 1944

I read that while the Ukrainians were unhappy with the German occupation, they did not necessarily welcome the Russians coming back in 1944, and there was even a resistance movement that eventually got quashed. I wish I could get more information on the topic.

Actually the Ukrainians welcomed the Germans as liberating heroes at first. You need to remember Stalin was starving the Ukrainians…3.9 Million starved to death 1931-1939

The resistance was called the Ukrainian Insurgent Army and its leader was a man named Stepan Bandera. He’s still lauded by some Ukrainians as a national champion, and I believe there’s a statue of him in Lviv. But Russians despise his memory, and if they ever reach Lviv you can be sure that casting it down will be one of the first things they do.
Americans love underdogs, it’s part of our national character, and I want to admire a man who resisted both the Germans and the Soviets. But Stepan Bandera was a hard man to like, and many of the terrible things that have been written about him are true. You can Google Bandera and the UPA and learn more than I could ever tell you but I think it’s remarkable that these guerrillas were able to defy Soviet power into the 1950s, with no outside support.

For going deeper I recommend the book “bloodlands” by Timothy Snyder. 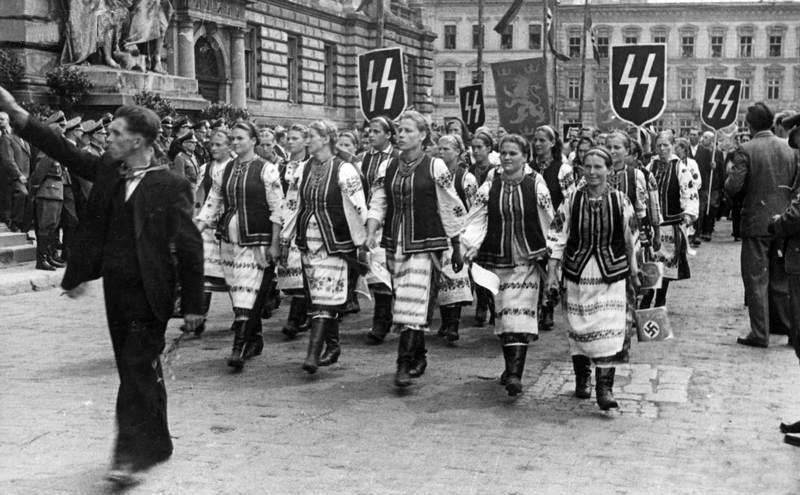 Thanks for the tip. I found it on the Internet, I will also read it.
But there is not only about Ukraine and the Holodomor. There about all the dead in Eastern Europe.

Borders were very fluent after WW I, especially in the described area of Ukraine, Poland, Belarus and the Baltics. The book gives a good overview of interdependencies, also considering antisemitism, holodomor, nazi- and stalin-terror. What a most horrible time …

Interesting picture. The national symbol of the lion and crowns was worn by 14th SS Division “Galizien”. It was recruited from Ukrainians, but Himmler didn’t want to encourage Ukrainian nationalism. Despite this, the appeal for 10,000 volunteers netted 50,000! Initially committed at Brody, they were trapped in the “Brody Pocket” and decimated. It was reformed but never saw serious action again. At the end of the war, the Ukrainians avoided being repatriated to the USSR and certain death by claiming to be Galician! Most of the soldiers were allowed to emigrate to the UK or the US. Some of the troops were trapped behind Russian lines, but instead of surrendering they continued to fight as partisans for several years, working their way to the Austrian frontier, where, the Cold War being in full spate, they were welcomed as heroes!

“Galizia” attracted Ukrainian nationalists and its unit
emblem featured blue and yellow, but officially these men were “Galicians.” Of course, there never was a Galician language or people. Recruits were ethnic Ukrainians who had lived in prewar Poland. They were required to be of the Uniate faith - this was meant to exclude Poles, who were deemed unfit to bear arms, although a few probably slipped through. Many of Anders’ Free Polish soldiers were recruited from Allied POW camps, as I understand.

In fact I’ve got my figures wrong. The required strength for the division was 13,000 men, but appeals for recruits actually produced around 100,000 applicants! 32,000 were accepted, 13,000 for the division, the remainder went to “Schuma” battalions, a sort of para-military force.

I do wonder how the Ukrainians reacted to the oncoming Russians. Was it a matter of “Oh, no, not you?”

Probably they felt abject terror. Being captured wearing the uniform of any pro-Axis formation virtually guaranteed a death sentence. And not just officers. Even Hiwis who had only been truck drivers, etc. often received an immediate bullet.