Greetings, friends.
Please have a look at my latest project and let me know what you think.

As with my last effort, I’m still in North Africa.

This entire diorama was inspired by the many propaganda photos of the Afrika Korps arriving in Tripoli. And a particular one of an 88mm Flak being offloaded. 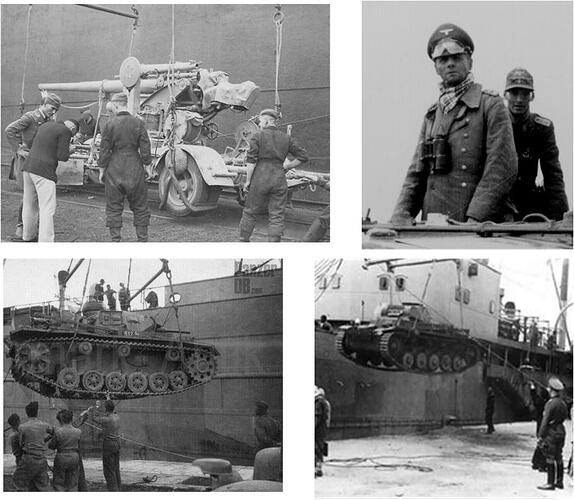 And then, of course I had to include Rommel, producing what I titled “The Predators” or “The two deadliest predators in North Africa – Rommel and the 88mm Flak”

As always, I work hard to ensure my dioramas tell a story. And keep them to my 30cm size limit.

In this scene, we see Rommel, in his famous pose (why not?) visiting the docks to watch some new equipment being unloaded. The 88 has received a quick coat of paint, before leaving Italy, to make it more suitable for employment in the desert. 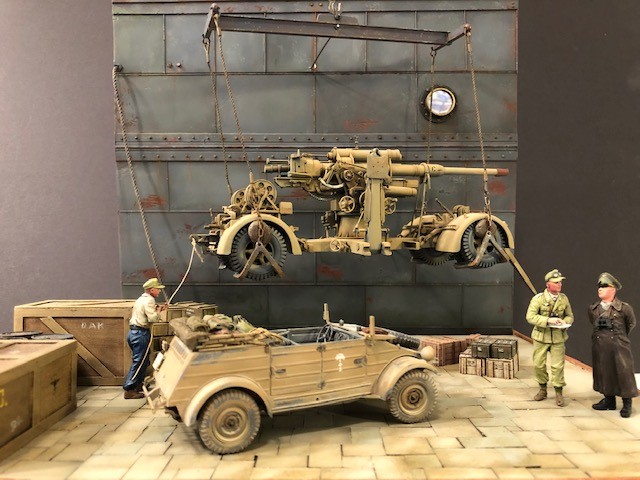 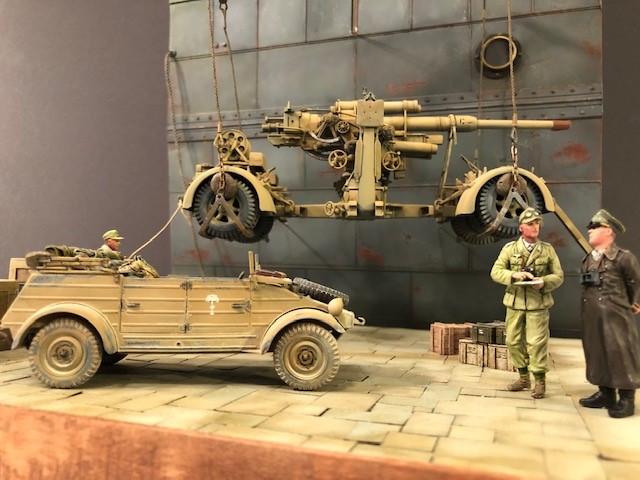 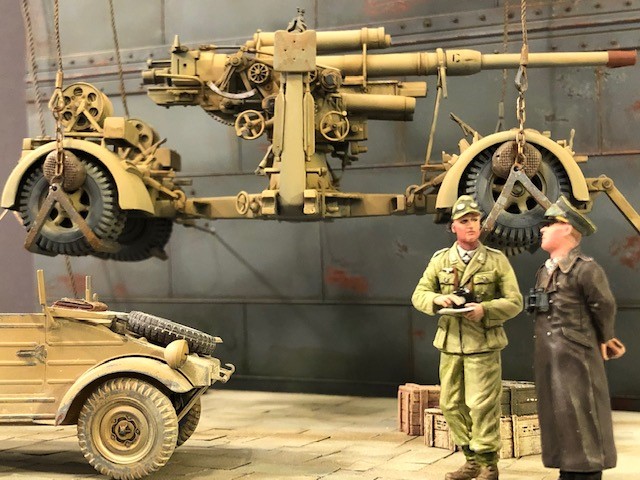 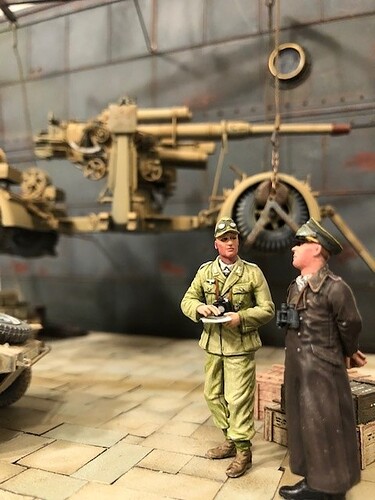 The gun is the old Tamiya 88. The Rommel figure is the old Warriors one, (I’m afraid that mold is a little worse for wear.) The other figures are plastic from MiniArt and Dragon, with Hornet heads. (I particularly like the staff officer (from the Dragon, ‘Rommel and his Staff’ kit).

The ship-side is scratch built as is the lifting framework, and the ‘wheel forks’ (at least that’s what I call them.) I added the porthole (perhaps, over-sized) to visually confirm that it is a ship’s side. Behind the plastic is a firm sheet of plywood, needed to support the gun (see more on that, below).

The crates, confirming a dockside setting, are from Steve at Value Gear. *Big tip: Always make sure to place stencils on all military crates and boxes. You can see what an excellent addition they make in this situation. 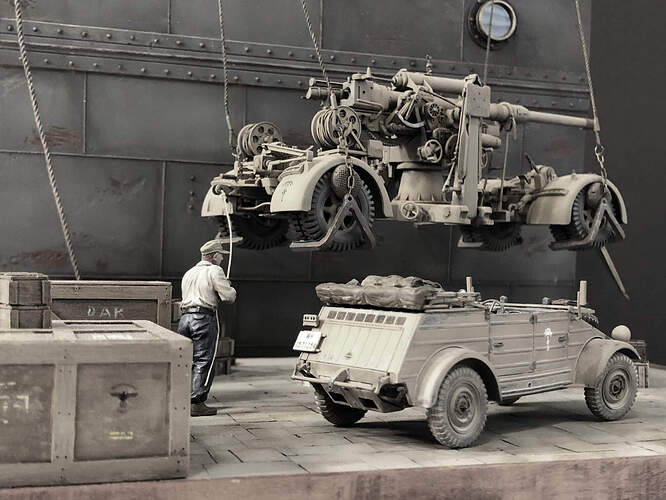 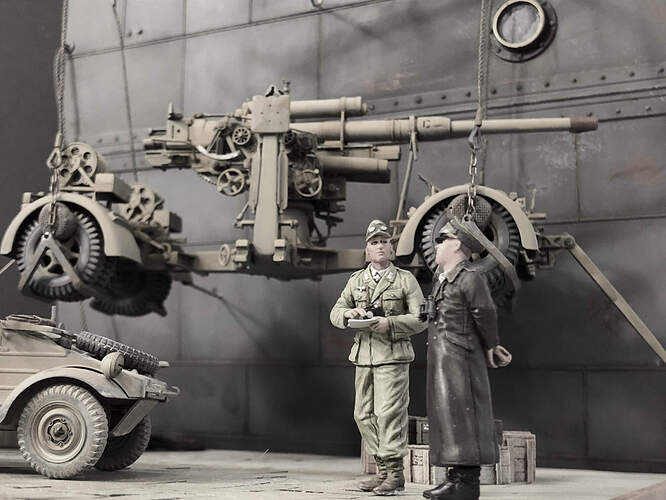 Staging – designing the layout of a diorama, is always a challenge. Here, the gun is the centerpiece. But I didn’t want it to be square to the viewer, or the background (the ship), hence the slight angle, and the worker pulling on it. I also wanted to show Rommel, but to fit the scene, I could only get his profile. No sense only showing his back as he stares at the gun. But he needed to be observing the unloading…

I added the Kubel (Tamiya’s), as an afterthought, to fill space – there was just too much emptiness in the front center. I think it helps…

Designing the gun, so it looks like it’s hanging in space from the ship’s crane was a challenge.

It is held, floating in place by several lengths of piano wire, protruding from the ship’s side, and pretty well hidden by the gun itself. That wire is very strong and stiff. I use thinner lengths for my radio antennas (I got sick of stretched sprue being broken by me, or by viewers.) 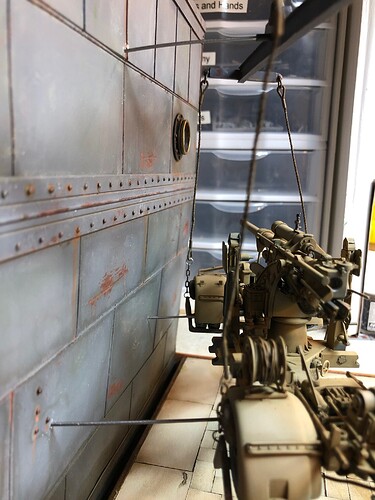 This was a challenging diorama – building the ship-side and supporting the gun in mid-air were unique aspects. And a lot of fun!

Please, provide feedback, positive or negative. Also, if I’m wasting bytes, or preaching to the choir, here, please let me know, and I’ll back off…

Ralph, I don’t like it at all…I LOVE IT!! I don’t give a whatever if there’s a bolt out of place, this scores off-the-scale for imagination, conception & execution. The only negative criticism I can come up with is where have you been man??! Welcome to the I mean THE forum. Wow

Thanks Tim. I appreciate the compliments, Actually, I’ve been around. A few months ago, on the old Armorama site, they published a feature display of my “Drunk at the Front” diorama. And over the years., prior, a few other dioramas of mine were shared. But since I retired a few years ago, I now have the time to dedicate to my favorite hobby, and my skills have improved. I highly recommend retirement, as a way to improve one’s model-making.

Apologies I didn’t recognise your avatar & agreed, Retirement can be a curse to workaholics but the best thing that ever happened to model-makers

I am amazed with the idea and its delivery. Very impressive, congratulations!

Very well done!
All the details… superb! Like the cushions on the wheels, the way the wheels are pushed in…
The boxes might be in the way, though…

Beautiful work !! outstanding !!
I’m not really a nit picker but I was called out on this once on a DAK build , should have the round pads on the outrigger legs for a flak 18 .
Doesn’t take anything away from the build for me though amazing build !!

This is amazing work! I love that you’ve taken the challenge to depict this snapshot from history with all of its elements. Very nicely done!

A truly masterful scene Ralph. This is one of those dios that you just go ‘Wow’ at! I think you’ve judged the composition beautifully- as you said adding the Kubel was a great choice as it gives more interest in that area and leads the eye naturally up to the gun past the dock worker. The figures are well posed too- just right to tell the story. Great explanations as to how you have staged the scene and what your thinking was behind each element of it.

Really a fantastic diorama. From concept to construction an all around A+
I don’t think you’ll find any negative criticism here because every aspect of your diorama seems to be well thought out and well executed.

Incredible diorama! Great idea and very well done! You don’t see dioramas like this often , very creative and great finish on everything.

I love the change of pace from the usual “out among the sand dunes” type of scene.
Ken

you really did that one right! Even your rigging was done correctly. Lots of folks would have missed that part. The gun and car work is top notch, and the figures are very nicely done. Even the ship hull looks great (to me anyway).

Very nice combination of elements. Unique also in that you rarely see elements suspended in mid air. Great concept and execution all the way around.

No offence to anyone else on the forum. But this has to be my favourite diorama I’ve ever seen. Love the concept, love the execution, and really like the ship side backdrop!

you spoke of the lifting gear:

The top piece (H-beam affair) is known as a spreader bar in rigging circles. The L shaped pieces under the tires are just known as dedicated lifting gear for that gun. The rope at one end is known as a “tag”, and is used to position the gun when being moved. Not much to it, but also important. When lifting a lot of weight (pretty much anything over 1,000lb. you try to make the cables and slings go vertical and not at an angle. That’s were the spreader bar comes into play.
They seriously weaken when used at an angle much more than twenty degrees. You did your home work right. The chains and clevises would normally be replaced with wire rope (cables), but this is 1942(?). One last thing. They would normally use two tags on the gun. One at each end to keep it from swinging around. Anykind of a breeze will make it like a sail boat.

as I said you really did well
gary

Thanks one and all. I do love diorama building over individual kits or figures. I’ve caught myself cutting corners on quality in both of those areas, as I focus on telling the story. And of course, it’s those flaws that catch my eye. In one of the photos I spotted a bit of the wire holding the subordinate officer’s foot to the ground.

That rigging was a challenge as it had to be sturdy enough to stand up, substantially on it’s own. I think it looks OK. (but it could be better, straighter…)

In any case, thanks. I really appreciate your comments.

If you have any questions, just ask - I don’t consider myself an expert, like many others on this site, who really are, but I’m happy to share what I do know.