The Problem With Captured Tanks

It mentions in the book “Captures Tanks Under The German Flag-Russia” that captured tanks eventually took on the role of pursuit tanks, even desirable ones like the T-34. I assume they mean tanks serving rear area patrols fighting partisans and such and not being among front line troops with German tanks. I presume as time passes appropriate ammunition and spare parts become less available, and the older T-34’s have disadvantages that become more apparent as newer German tanks come into service.

Seems a captured tank would be at more risk of friendly fire in front line use than in rear area use. Maybe that played a role in how captured tanks were used.

Correct. Plus a few more reasons:

This is all true, but Das Reich (2SS) had a company of T34s at Kursk. They even had their own “ace”, Emil Seilbold. The biggest problem was probably spares. This was endemic to the Wehrmacht throughout WW2 and their tank production was geared to finalise vehicles at the expense of spare parts. Spares for T34s would no doubt be or become a problem, even though the SS had captured a tank factory in Kharkov making T34s! They stationed part of their Instandsetzeug battalion there to service the tanks and keep making them! The T34, even the 76mm version was at least a viable tank on the battlefield (more so than the Panzer II or III). I expect the smaller light tanks they captured would have been used for partisan warfare. 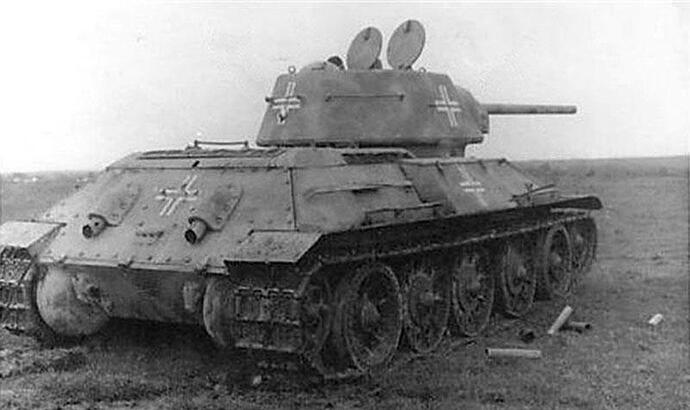 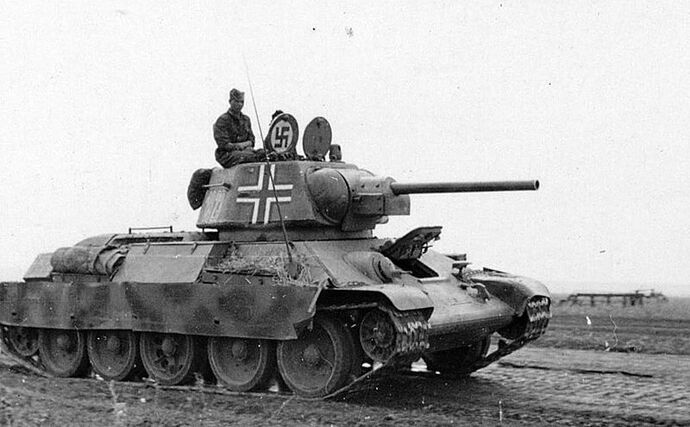 So T-34 tanks really were viable as battle tanks for the Wehrmacht after all. Thanks.

I have a book around here that presents a table taken from Red Army post-war analysis of German tanks vs the Soviet tanks. They put their statisticians and mathematicians to work and,using the Panzer III with the long 5 cm Kw.K L/60 as the median valued at 1.0, assigned effectiveness. The early T-34 was rated as 1.15, and the long-75 Pzr IV was about 1.25.

anybody have an idea what factory these tanks came out of?
gary

Got no idea, but here’s a dedicated website that shows many other German-operated T-34’s :
http://beutepanzer.ru/Beutepanzer/su/t-34/t-34hex/das_reich1.html 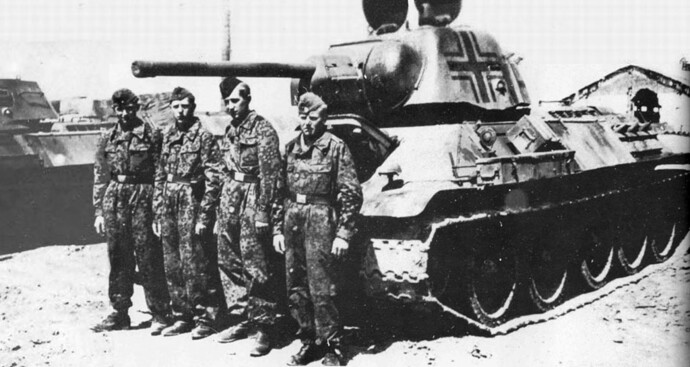 Yes. But it will be Mon. or Tues. before I can look for the table. It is in the book T-34 vs StuG III Finland 1944 from Osprey Publishing. The six tanks listed are:

I haven’t found the full analysis the Soviets produced, I assume the Tigers and a few other AFVs were listed.

book “Captures Tanks Under The German Flag-Russia” that captured tanks eventually took on the role of pursuit tanks, even desirable ones like the T-34. I assume they mean tanks serving rear area patrols fighting partisans and such and not being among front line troops with German tanks. I presume as time passes appropriate ammunition and spare parts become less available, and the older T-34’s have disadvantages that become more apparent as newer German tanks come into service.

I will take the freedom to answer that quetion:

A computer program developed by the Soviet Army after 1945 modelled and
compared the combat performance of various tanks. The table below shows the Soviet
Army’s assessment of the major Soviet and German tank types in service in 1944,
using the PzKpfw III armed with the 5cm L/60 gun as the baseline AFV.

Are these effectiveness ratings only refer to the gun, or do they also involve armor effectiveness, mechanical reliability, combat survivability, etc? Is the 122 mm gun of the IS-2 only 1.66 times as effective as the long 50 mm of the Pz lll?

@golikell Erwin, Thank you for sharing that information.

That’s amazing similar to what my, old wargaming experiences with Avalon Hill’s Squad Leader/Cross of Iron games would suggest.

Yesterday, an old friend and I we discussed the Eastern front and the old AH game. Tank versus tank in the game with a Panther I could normally kill 2 or 3 T-34’s before getting knocked out. I’d rated a Panther Ausf A or Ausf G about 2 to 2.5 times better than a T-34. Of course, in the game a Panther Ausf A or Ausf G wasn’t subject to excessive mechanical reliability issues the Ausf D had in game unless one abused it.

Likewise rated a Pz IV G/H/J at half a Panther or about 1.25

I recall the JS-2 game wise as pretty good, but poor optics hurt its chances of getting a hit. Limited ammunition storage limited the number of shots it would get to take on several occasions. It was impossible to force a higher rate of fire in a desperate situation unlike the T-34’s or German Tanks. So JS-2’s could be extremely frustrating…in that game anyway…so 1.5 or so just better than T-34

I wonder if Avalon Hill used that data back in the 70’s to tune the game accordingly.

The IS-2 literally had more armour on the sides than the Panther had on the front.

So T-34 tanks really were viable as battle tanks for the Wehrmacht after all.

I do recall reading of them being used as subterfuge tanks in Easter Front operations to seize certain objectives, as was done during the Ardennes by Skorzeny and his modified vehicles. A small column of captured T-34s would be used to reach a bridge or similar key point and seize it ahead of the main panzer column, primarily during hours of darkness. Defending Red Army troops would see a familiar friendly silhouette and allow the tanks to proceed to their objective.

Man, thank you for posting that. That’s the table I was thinking of and referred to back last month. Unfortunately, I got distracted and completely forgot about it. Thanks for finding it and posting it. I found it in the Osprey book. Do you have the full table that you can provide some day?

To the original poster questioner, I’m sorry I forgot about it.

This is the complete table, from exactly that book … Sorry…

I really wish the Soviets had provided their rating for the Sherman that would have nicely rounded it out. I would guess it would be 1.1 for a 75mm and 1.3 for a 76mm Sherman.

Yet during the Korean War, US tanks were provided with better quality ammunition than what they had in the previous war, and therefore could knock out all the Russky tanks they encountered, which the Russky tanks had a more difficult time doing the same with the US tanks.