I note that AFV Club now sells two versions of the Long Tom cannon, their old version and now a WW2 version. So what is the “other” version based on?

The older kit is based on a Korea era gun.

@taylorrl did a review on the newer kit here and explains the differences/changes. 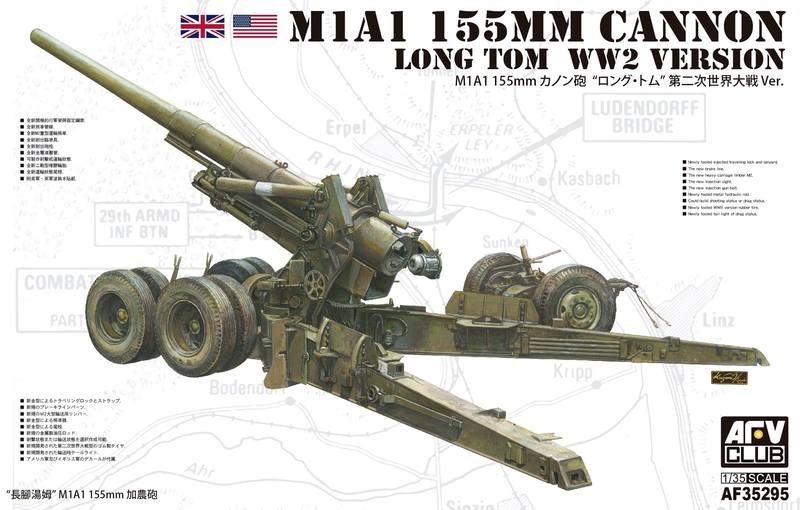 I thought of building the gun for a Korean War scenario after looking up the Tamiya M40 and finding the kit heart-stoppingly complicated! Ironically I can easily find books on tanks but nothing on artillery use or bunker design, even though the latter part of the Korean War mostly involved those rather than tanks.

This can be as simple or as complicated as you want it to be. If you want an accurate Korean War towed Long Tom, build the AFV Club WW2 kit and borrow the non-directional tires and the late model limber from the AFV Club Korean war kit. If you aren’t as concerned about the accuracy, just build AFV Club Korean War version. The barrel is off dimensionally, it is not as detailed, and it lacks the airbrakes; but, only a few of us will notice these small issues.

For the M40, the Tamiya kit is far superior to the old AFV Club kit. The Tamiya kit is both more accurate and easier to build. The instructions are good, the detail is great, and everything fits perfectly. Although the Tamiya kit may look daunting, it is not a difficult build.

Dive in and have fun. The 155mm guns are great subjects to model and we are blessed with good kits of the subject.

It also occurred to me that in the Korean War, the tanks often drove up to shoot and then had to drive away to avoid getting destroyed. An emplaced Long Tom could not readily be moved.

Different firing distances?
155 mm gun M1: firing distance up to 14 miles (23 kilometres)
Realistic fighting/firing distances for the tanks was most likely less than 2 miles.
it is releatively easy to return fire when you can see the other side firing at you,
the guns firing shells at you from 10 or 14 miles away are harder to locate.
Artillery locating radar wasn’t available during the Korean War. A counter-battery radar (alternatively weapon tracking radar or COBRA) is a radar system that detects artillery projectiles fired by one or more guns, howitzers, mortars or rocket launchers and, from their trajectories, locates the position on the ground of the weapon that fired it.: 5–18  Such radars are a subclass of the wider class of target acquisition radars. Early counter-battery radars were generally used against mortars, whose lofted trajectories were highly symmetrical and allowed easy ...

" Radar operators in light anti-aircraft batteries close to the front line found they were able to track mortar bombs. This was likely helped by the fins of the bomb producing a partial corner cube that strongly reflected the signal. These accidental intercepts led to their dedicated use in this role, with special secondary instruments if necessary, and development of radars designed for mortar locating. Dedicated mortar-locating radars were common starting in the 1960s and were used until around 2000"

"By the early 1970s, radar systems capable of locating guns appeared possible, and many European members of NATO embarked on the joint Project Zenda. This was short-lived for unclear reasons, but the US embarked on Firefinder program and Hughes developed the necessary algorithms, although it took two or three years of difficult work. "

The Tamiya is detailed but well engieered build,not overly complex,it was a great build for me.
I would definitely recommend it.

Since it kinda relates to this discussion, is the Acedemy M12 still considered okayish?

Edit: Having reread what reviews I could find, I now feel very old.

When did Tamiya make the Long Tom ?

Tamiya does not make a Long Tom. They do an M40 GMC which uses the same 155mm gun as the M1 Long Tom.

An interesting topic in its own merits.

I’d suggest that if someone is interested in “old school” techniques for counter-artillery and counter-mortar direction finding techniques check out the topic “shell crater analysis.”

Most folks have an incorrect mental image of the shape of an artillery or mortar shell crater. They actually offer a number of distinctive clues about the reciprocal direction of the fire which can be measured with a fair degree of accuracy and triangulated with measurements taken from other craters.

The US Army taught and used these methods into the late '70s and early '80s. Don’t know if they still teach it, but it is still included in some current Field Manuals.

I’ve kinda been interested in the Korean Conflict (Police Action, or war) for quite awhile. Talking with Korean war vets it seems that everything was shoot and scoot. Rarely did you stay in one spot for 72 hours. Not enough time to build ammo and powder bunkers for sure. Your also kinda pointing north all the time. One thing I did notice was that with the 155 howitzers; they had a tendency to dig them in a little bit (protection?) Were big on camo netting as well. They usually tried to be withing a mile to a mile and a half of the infantry to give them even further range should the other guys start to pull back in mass.

I was at a base camp that got one of the first counter battery radar systems in mid to late 68 (it was still dry). It was a small affair that sat on a tripod about the size you would use for a camera. Screen was maybe two to two and a half foot in diameter. Didn’t work great, but they had more than their share of incoming to test it out. The idea was that it could give you thirty seconds lead time, but it really was closer to ten seconds. After it was over there was a way to go back into it and plot where the rounds came from, but the very slightly trained kids couldn’t get that part done all that well. Imagine the new stuff is deadly accurate
gary

that’s the way I learned. Never was real good at it, but also never took the time to get into the concept when I had the chance. From my stand point (mostly mortars with a few 122 rockets) shooting well after dark, and if you had a pair of balls. You could pick out the flash from the rounds leaving the tubes. Rockets were another story. They didn’t use a tube, but were shot off a tripod affair (maybe four legs), and once you knew what to be looking for were easy to spot. The real problem was that by the time you got a gun pointed at them and were ready to return fire (three and a half to four minutes); they were gone. The mortar guys usually had a hundred or so rounds so you had time to end that party with four or five rounds of WP. They usually picked out places to shoot from (not every place is good), and have a spotter about 200 yards out from you. You get the spotter and they are winging it. After awhile you know where these places are, and you take the time to “pre-register” them. The spotter is the easy way
gary

@SdAufKla Damn! you beat me to it. I knew some guys who could do that crater analysis stuff!
Ken

The Arty School still taught it in '99 when I last was there for OAC. Tried it a few times in Iraq, but was never good at it either.

That would be very difficult to do in sand!
Ken

Not only did we learn crater analysis to a degree, we were able to analyze the actual remnants of mortar shells and other ordnance. The Soviet/Chinese 82mm mortar rounds had fuzes that were pretty much super quick. They would detonate so quickly that the mortar body would explode and the tail would continue on and drive itself into the ground at an angle.
107mm rockets like the one I use for the air intake on my bike left telltale signs as well. This one was still smoldering outside my hooch when I picked it up. It’s the only one I ever found that didn’t split up upon impact.
Note the canted venturies. That’s what imparted spin to the rocket since it had no fins. 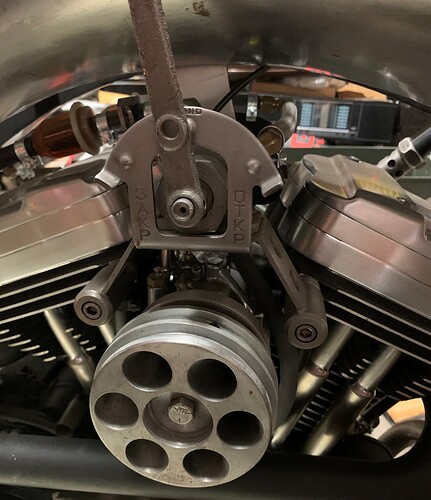 Damn, I keep hearing about tanks and AFV’s and find very little on artillery, besides the 88mm WW2 Flak cannon.

a typical mortar round is almost useless to try to figure the flight path from, but a rocket is much easier. Even a PD impact will leave a nice crater to work off . A delayed fuse is even better. We just crawled on top a bunker with a towel over our heads to get our vision working right. Once you’ve overcame night blindness your in business. A typical 82mm or 120mm will let you know right after the flash, and more often than not are within eye sight. Still better to find the spotter with the field phone
gary