This is the inspiration picture. 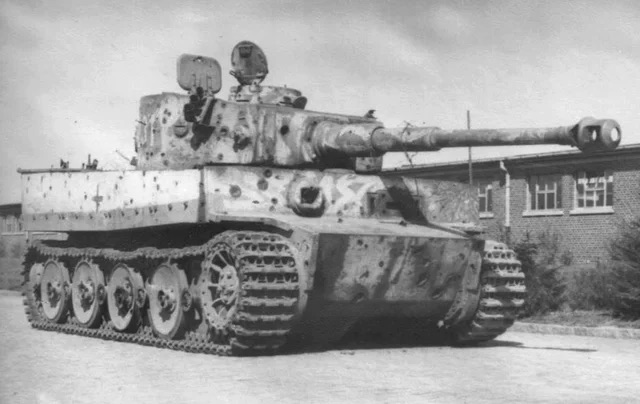 Apparently it was hit no less than 250+ times, and still managed to drive off the Kursk battlefield.

Is the tank above the same as the one below? 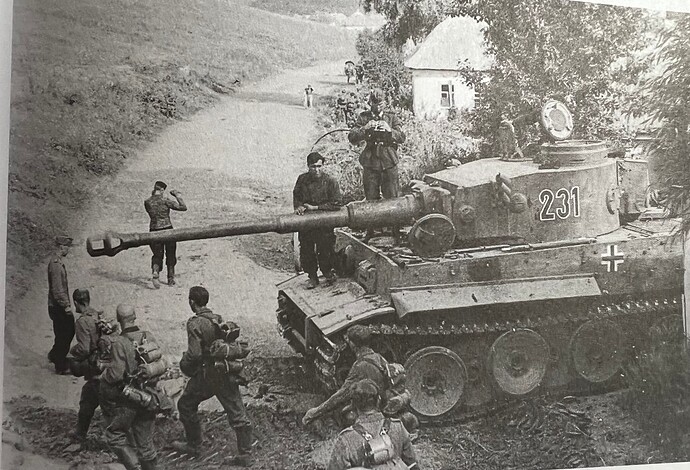 And, with AM transport tracks, would the Tamiya Fruhe Tiger 1 kit build Tiger 231? @DByrden

Looks like it had the very early turret with double pistol ports?… 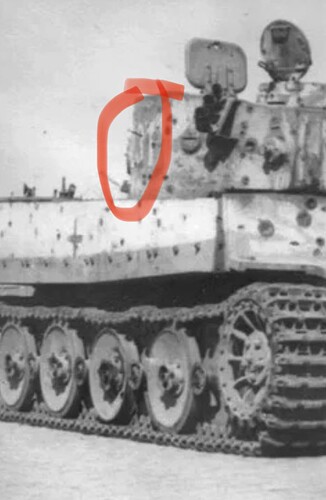 There is currently no model kit that builds the correct version.

Yes, it had two pistol ports, the Panzer 3 turret bin, the “type 2” side skirts which are not in any model kit, the slanted “initial” front edges (but with round corners). It didn’t have the S-mine system. And a few more little differences from any available kit.

No, the 2nd photo is not the same tank.

And no, it was never anywhere near the Kursk battlefield. Tiger 231’s final battle was 6 months before Kursk and hundreds of miles away.

It looks to me like the panzer iii turret bin has been lost along the way in the picture with transport tracks, don’t you think?

So was 231 on the Leningrad front? Looks like it with the sloppy whitewash. I guess that was a giveaway the tank wasn’t at Kursk…

231 belonged to the 503rd and its battle was in the Rostov zone.

Yes, it’s definitely missing the turret bin in that photo.

There’s a photo showing it on a rail car with “battle” tracks, so I think the “transport” tracks were applied during the journey home, or even after arrival in Germany.

Thanks for the really useful info @DByrden

If possible you should try to find photo’s of the 231 with the outer road wheels. I am sure the battle damage extended to the road wheels and track also. 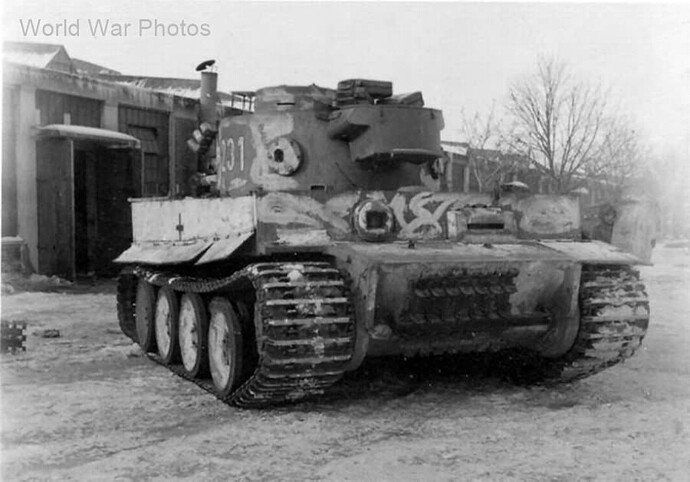 The photo above appears to have been taken before it got hammered. 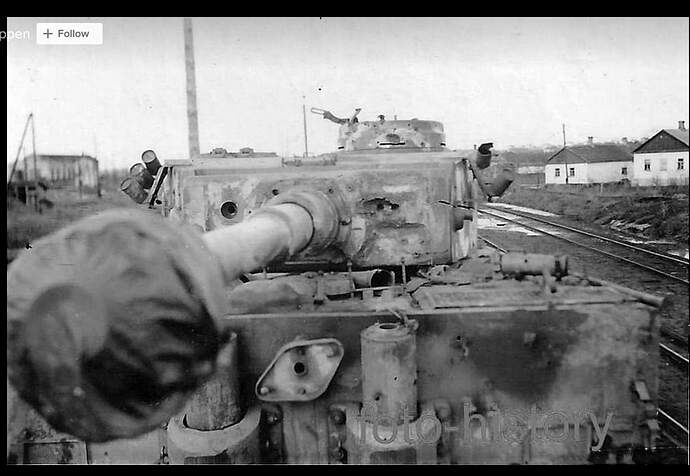 The second photo is useful. I now know it had the mantlet with extra armour over the twin periscopes, not that there is much of it left in the photo.

It’s a bad photo, but this is apparently the journey home. 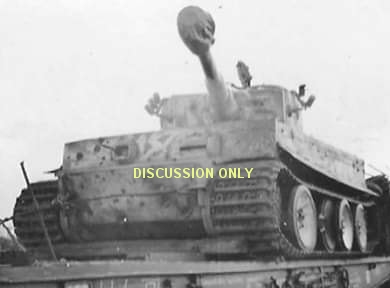 Note the wheels missing. That would be another problem for modelling, because no model kit has the even-numbered hubs. I think somebody sells them as aftermarket.

Looking at the back of the tank, you’ll note that it has no S-mine supports, the antenna tube extends beyond the back wall, there were never exhaust shields, the adaptor plate is angled, and the track toolbox never had a frame.

The colour is whitewash over RAL 8000. 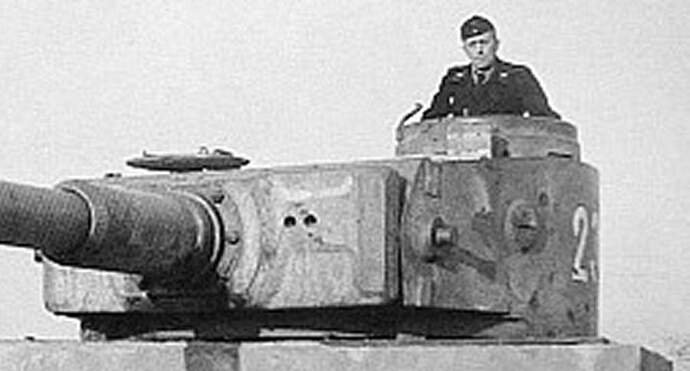 The turret was used in gunnery training.

This should give you an idea of how badly the left side was hit. 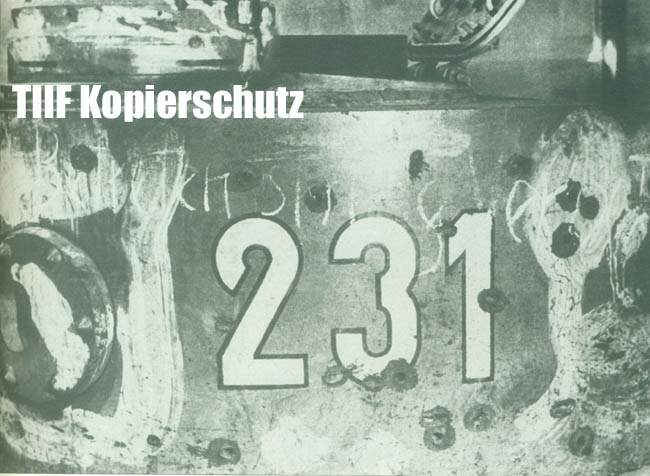 The right side got it worst.

Thanks for these photos. Really helpful!

The Tamiya kit includes a couple of hub caps as an alternative to the outer road wheel immediately after the drive sprocket. 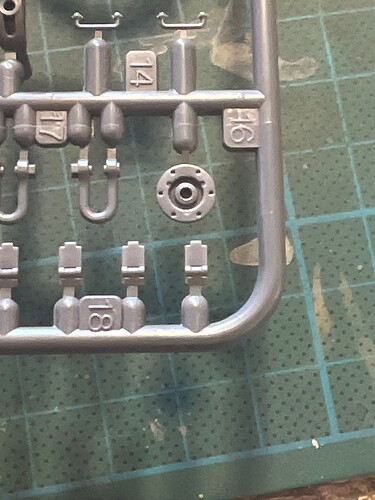 I could use these.

Looking at the photo on the flatbed it seems only one wheel is missing. I label it No2 in the picture below. 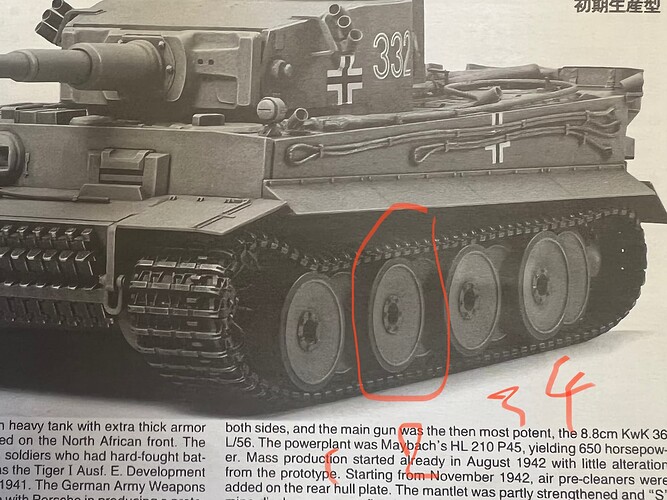 Is that the only wheel that is missing? It’s hard to tell from the photo.

Ah, now I can see that it’s the outermost wheel on the 3rd axle that is missing.
Tamiya’s hub part isn’t as accurate as some other makers’, but it’s the type that you want for that wheel.