Tiger falling through the ice

Thinking about the build a photo 2021 group build, I have been thinking about this picture of a Tiger having fallen through the ice and about to be pulled out. I don’t think I’d build 4 kits, but maybe 2. The only picture I have is online so I can’t make out much about the Tigers: 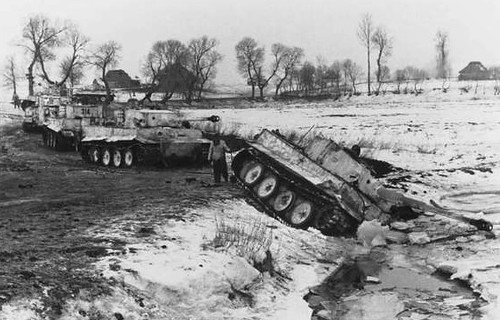 It’s labelled as a Bake Tiger (sAbt 503) from 43/44. Anyone confirm this or have alternate info? Any additional info about the tank (I guess both the one in the ice and the ones trying to pull it out).

Very nice pic, and that would be a great build… If I only had 6 Tigers to build it … 2 would work though…

Thanks Paska for the link. I had seen those. The one on the train has some good close-up possibilities but the others are pretty hard to make out any details on. I imagine they are all mid Tigers. I asked about doing another Bake subject on the old forum and David Byrden suggested I would need a mid Tiger kit. I would have thought some early versions would still be around, but perhaps they were run down before and then re-equipped with a lot of new vehicles.

Johnny - it’s an interesting picture and would be fun to reproduce. But there would be a lot of things I would need to learn to do well to pull it off - a water feature, frozen water, snow as well as having a vehicle on an angle. It’s interesting to me that the roadwheels seem to be mostly straight even though it’s plunging into that lake.

The road wheels running nearly in a totally level position isnt anything out of place really. When you look at the ground and the overall angle of the slope the Tiger is going down it is seems pretty constant so there wouldnt be any great deviation in the road wheels positions etc. Also, take into account the width of the track which isnt seen in the pic, and the inner road wheels would still be on the even sloped ground keeping pressure on the tracks to give that uniform levelness. With torsion bars they have a built in self tension so that keeps them semi level at all times so you dont normally see massive variations in wheel position unless the ground is very uneven or has acute angles in raises or drops, - as an example a large railway type sleeper would cause a major wheel movement up and down. Hope that makes sense.

You can see where the track is under pressure on the upper section which is taught from the top of the sprocket ring to about the 5 road wheel where it then starts to run back over the top of the last few road wheels.

The unlucky Tiger is obviously a final “Mid”, with the rear travel lock. There are kits from Tamiya, Rye Field and Dragon to build that.

Its turret ID is “311” and it belongs to s.Pz.Abt.503, as we can see from another photo. It is marked in the typical style of the “Bäke” period. A photo of the back of its turret bin shows that it had the turret ID written there, but no Balkenkreuz flanking it. 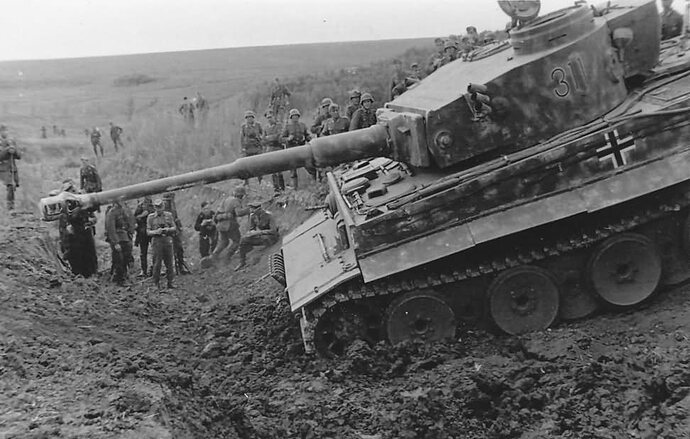 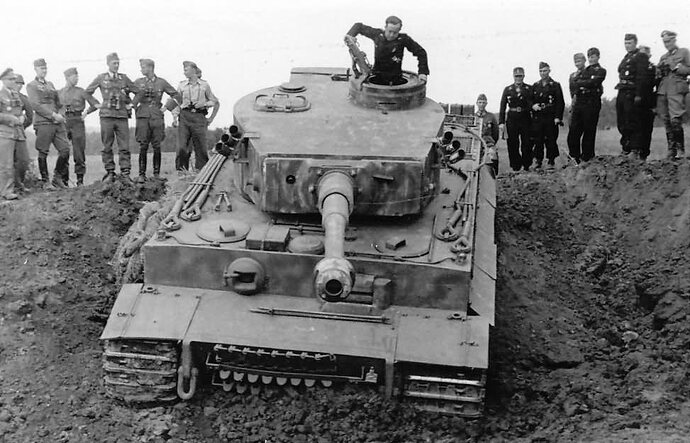 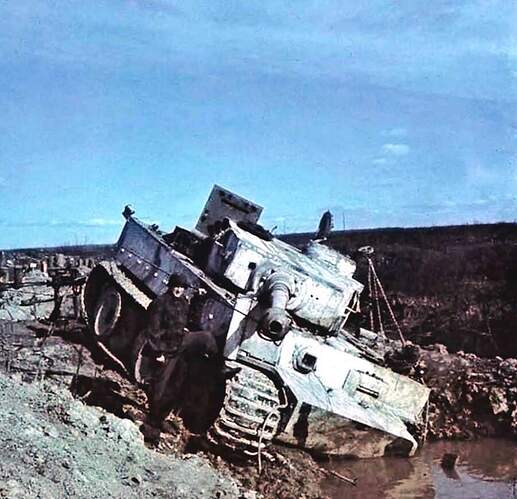 The colour photo is Tiger “1” and it belongs to s.Pz.Abt.502 and it has nothing to do with “311”. Don’t trust captions from random sources.

Don’t trust captions from random sources.
Yes I know about that…

Thanks for setting things straight David !

There is this from the other set of pics but it has balkenkreuz on either side of the rear turret number. I thought it was the same tank because of the distorted right front fender, but it’s a different tank? 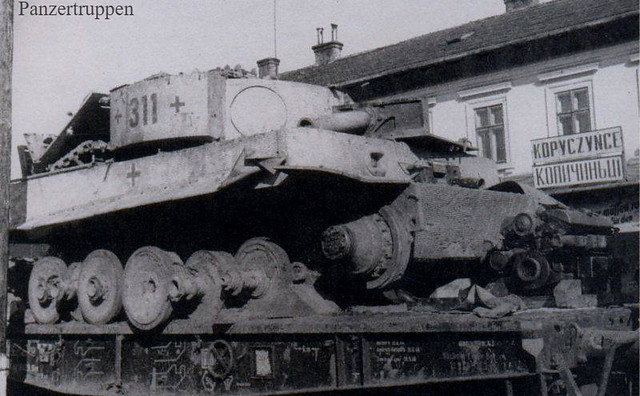 That’s the tank, and there they are now !