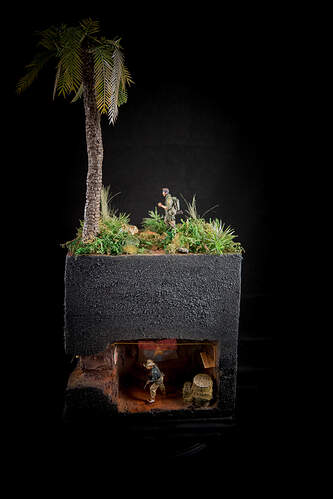 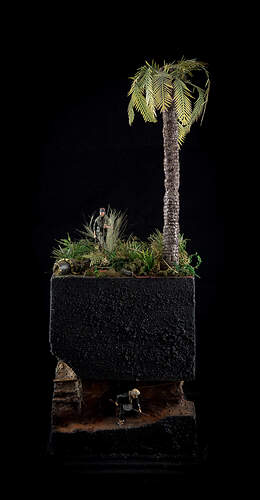 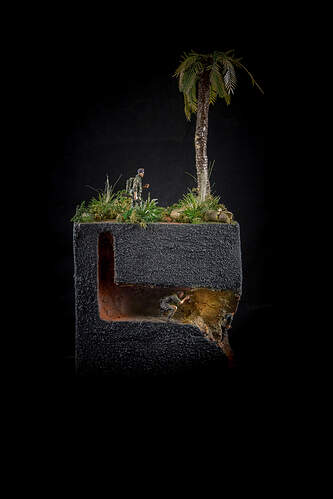 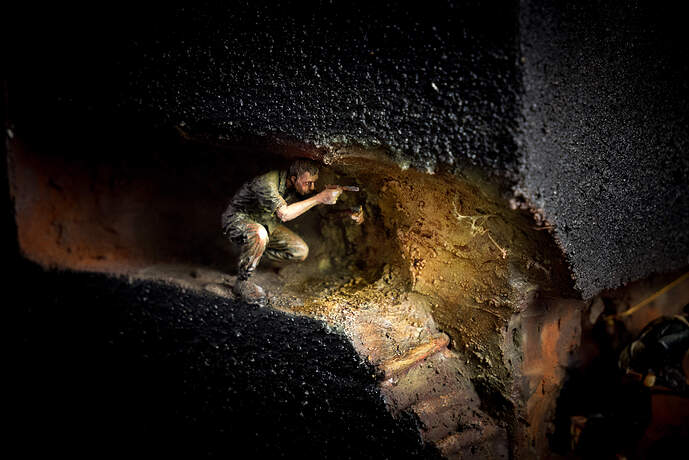 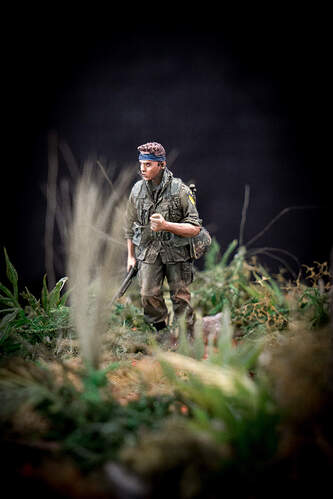 You guys are so cool! From coneption to completion there are some talented ceative artists on this forum.

yup, not very fun. I already have claustrophobia, and the threat of being shot by the survivors, I would NEVER do that.
none the less, amazing dio! Looks amazing.
Logan

An amazing vignette, having been down the Cu Chi tunnels…as a tourist I hasten to add,

…it brought back memories of the claustrophobic feeling I experienced.

We didn’t have many tunnel complexes in my area of operations thank God! Yet we’d run up on one every few months. Usually a field hospital that’d been abandoned prior to our finding it. I was one of the smallest guys in my base camp. but also knew how to be scarce. SF usually found them, and usually took on the task. They used 45’s with silencers, and a High Standard 22 short with a silencer as a back up.

Later they tried many other ways to clear them out, as the often booby trapped entrances. Even so far as hanging “two step charlie” so that you’d get it in the face. There were usually several ways in, and several air holes. You had to find them! If you saw a guy enter one it was safe to enter there. Otherwise do something different. I’ve seen them try carbon monoxide generators, and literally trying to pump napalm in them. Rarely worked. Best system I saw was a long bamboo pole with a sandbag filled with nitro starch and a four minute fuse. You find the air vents and entry ways real fast, but everything inside is Jello. If your ontop the hill, you think it’s going to cave in, and suck you in as well.
gary

Wow Gary, thanks for sharing. I can imagine the hell you and the other guys out there must have gone through.

Worth reading on this topic… 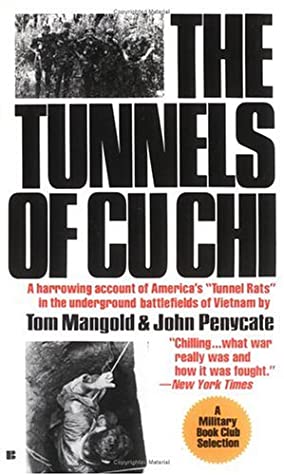 Redfive, looks fantastic! That’s an outstanding use of 3D space for a vignette. Well done.

tunnels were something you avoided. Yet I was more afraid of bunker complexes than a tunnel. After all he can’t shoot at you down there very well. We found two about a half mile outside the wire, and looks like they’d been dug years prior. One we found had once been a hospital, and left in haste. There was nearly a ton in medical supplies (all from western Europe). It was all given to several church run clinics, and boy were they happy!
The real problem guys had with tunnels is time to explore them. Most are found in a rapidly evolving situation where both sides are moving fast. One side is simply stalling till it gets dark, and the other is trying their best to keep it light outside. Or; as it was in I-Corp anyway, your working the night shift and trying to keep them off you till dawn. Twilight is when they’re gonna get to you as your eyes don’t work well in that kind of light. I hated sunset and dawn. Then when it does get dark some fool ROTC LT. will pop a half dozen 81mm illumination rounds making everything seem to be moving. That’s when they pop out of tunnels and bunkers cause you can’t tell what’s moving or not moving. Full moon nights are also spooky. You can almost read a newspaper. Plays tricks with yours eyes and making it easier to pop out of that tunnel. It all becomes a cat & mouse game. Inside the tunnel for the most part, it’s dark. You always carry two flashlights and maybe an extra pair of batteries. No night vision stuff! The concussion from a 45 will do wonders for your ear drums, but it only takes one round to prove your point. The guy posted at the tunnel entrance hears a round go off and everybody gets nervous looking for even more unknown exits. They often pop out shooting (I would too), but rarely get away. With the nitro starch method, you just walk in and lead them out. They don’t know if they’re coming or going as their bell has seriously been rung. They used to go inside them and dust the place with this powder that make you sick and puking. Made it unusable for a year or so. The stuff wouldn’t kill you, but from what I heard it’ll make you wish you could croak.

So how does one find one? You watch for foot tracks if it’s muddy. If they’re heavy, you know to lock in on this one. SF used to follow blood trails for hours and hours till they found something useful. Another thing is to watch for trail watchers up in trees. You start to see several, and there something close by. Usually they’ll see you first, and get away. But it tells you to start watch the ground closely. Local infantry had dogs (really big and extremely mean canines). They’d bring in two or three, and the fox hunt was on. SF did it the hard way, but they had trackers like nobody else did. These guys could spot a ten day old trail in the rain. The NVA caught wind of a tracker, and they were on an express way to get outta dodge. We had one guy in our area that found a tunnel with the entrance under water! He saw tracks in the water and followed them. It had a lot of neat stuff inside it with a half dozen exits. After it’s all over and you find that tunnel complex, somebody’s gotta clean out. Then after all that, the EOD guys come in and blow it up. SF blew their own up with captured stuff. I always figured they were back inuse a year later!
gary 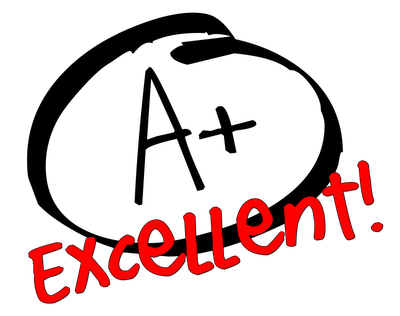 Did you use a light or did you do a rembrandt kinda light paint technique in the tunnel …cause it looks great !

I too have visited the tunnel complexes at Cu Chi many years ago and in my thinner youth i managed to get through an original tunnel entrance which wasn’t easy and back then i was a lot thinner.

as i recall reading they used to attach ropes to the tunnel rat’s leg to drag him out if he lost the fight underground. the VC would also place punji pits in the corner of the rooms as they knew the americans would head for those first when they charged into the underground rooms.

the walls were usually smooth as they were carved from laterite clay which sets like concrete when it is dry. the americans pumped all sorts of things into those tunnels as Gary_Totty has said including CS gas. another method that was successful was bombing the area with 500 pound bombs fitted with delayed fuses, which the VC called earthquake bombs and these by their own accounts did have an effect on the tunnel complexes.

Just paint. I tried red at first but it look kind meh so white/yellow did the job.

first tunnel I was ever around was maybe June 68 out in the Que Son Valley. They must have emptied three 55 gallon barrels of Napalm in it, and simply tossed a WP grenade in there. A total waste of time other raising the heat index about twenty degrees (already close to 125 degrees). Later I saw them fly out a generator that produced carbon monoxide gas. The hose was way too short, and all it did was make everybody sick in their stomach (including me). The bamboo pole with a sandbag filled with C4 was about the best I saw… Still I can see the advantage of 1000lb. bombs set on delay. Wouldn’t take but two or three to get everybody’s undivided attention!

By 1968, we pretty much had the tunnels figured out. You just had to find them. Vietnamese Rangers and Koreans were the folks they didn’t want to meet inside one.
The would send a half dozen in there at once, and were not afraid to use a rifle or shotgun in there (probably have no hearing). SF used to set booby traps inside them, and take a nap outside. Usually a couple Claymore mines. I’ve even had SF come by and get three or four 5.56 ammo cans filled with my own brand of foo gas to put in a tunnel. How well that worked I have no idea as they were kinda closed mouth about that stuff
gary

Love it, works very well! Got that book too, many moons ago.