US Army to get a new light tank 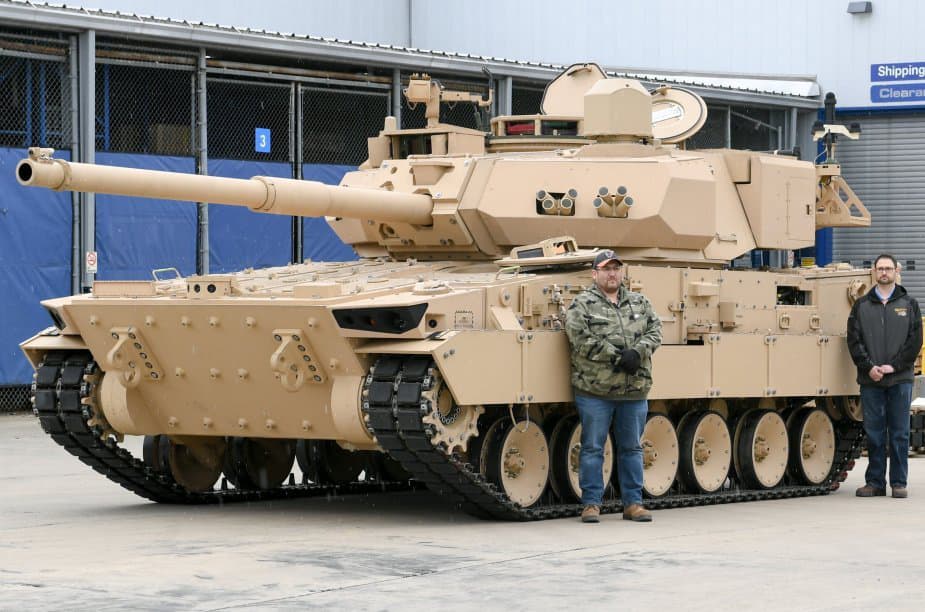 Can’t help but think someone confused ‘light’ with ‘medium’.
Usually ‘small & light’ go together - like Scorpion - at 8 tons, this looks “huge & heavy” at 38 tons.
Ok, perhaps in comparison to M1 at 70 tons, but it’s still stretching the term.

Could they make it any taller? Should be fun to try to hide…

when I first looked at the picture I was thinking another BAE pile of junk. The Sheridan concept was about twenty five years too early. The ideas were nice, but the technology just was not there at the time. And of course Mac. got his fingers in the pie to further screw the pooch. The gun launcher on paper seemed like a fantastic idea, but needed a complete redesign even before production started. The rocket never saw a minute in combat, and was never right from the get go. Yet it would destroy another tank effortlessly.

Fast forward to modern stuff and modern hydraulics and the above system is quite doable. Rumors have been flowing in the old work place that there is a hybrid electric drive in the design works. I wonder if this is the one? The old AAAV power pack was a hybrid drive system, but also pretty large (cu. ft.). Plus it’s already tooled up! (saves huge cost concerns). Looking at the rear of the tank, it looks like there is enough room in there. I wonder if the main gun is a take off from the low recoil 90mm gun that Rhinemetal developed. They actually considered regunning Sheridans at one time with that 90mm gun.

With GDLS getting the contract; I’d expect it to be built in Lima Ohio or maybe Warren Michigan. Both areas need the jobs
gary

Totally agree, that’s far from light Mal and again with Tom, it certainly stands tall…turret looks out of proportion to the hull. 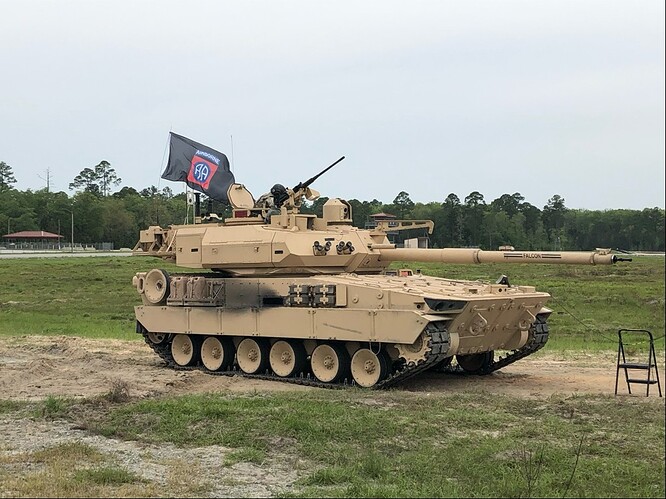 What’s unknown is if add-on armor package can or is installed. The 16 smoke grenade launchers is nice and I wonder how many salvos it can fire—perhaps four.

Was Griffin II shown with Iron Fist APS? Is that a Boomerang antennae at the left rear? There is no CROWS-LP RWS which should have been a Requirement since these are “First to fight” Airborne units and TCs shouldn’t be sticking their heads outside firing the TC’s HMG. Ah, the Army can add CROWS later.

I’ll reserve judgement until I read more because Centauro 120mm 8x8 has a 120mm cannon and 20 rounds for a compact size. MPF is 105mm and tracked; however, sure beats Stryker MGS 105mm. 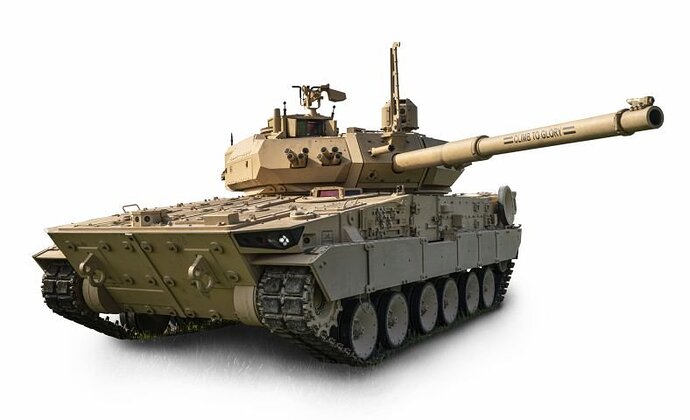 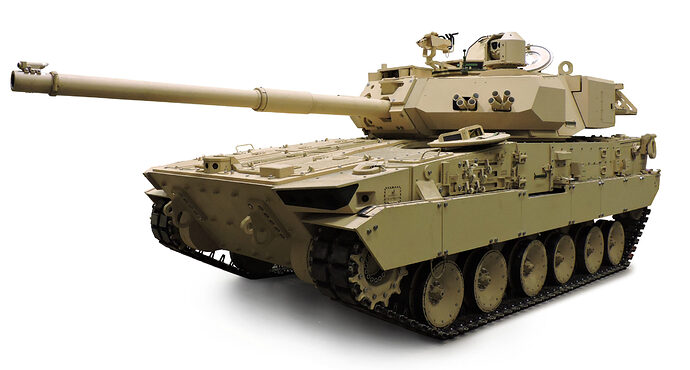 Not sure why they couldn’t have used the MGS?
Like this tank really has much more armor than a wheeled vehicle.

The U.S. Army is fortunate that they were ever able to agree on a vehicle at all. I worked as an analyst for the Army when the “Mobile Protected Firepower” concept was first floating around and I touched the periphery of the early concept development. Many of the people I worked with were retired officers or colonels who remembered the M-8 program pretty well. We all wondered if the Army would save itself some trouble and just revisit something that was well established. That’s about where my involvement ended and shortly after I changed jobs.

The plus side is that the Army actually realized its dire need for a “light” tank instead of fiddling around like it did with the M-8, or trying to stick with the disastrously stupid Stryker MGS, or continuing to delude itself that the Abrams meets every conceivable armor need. The preceding concepts that came to our organization were all on the opposite side of the spectrum (if you want to laugh and cry about the U.S. Army’s 2010’s combat vehicle procurement philosophy, look up the “Ground Combat Vehicle”). Well before my time as an analyst was the early 2000’s FCS concept, but I remember hearing about it as a lieutenant. Again, they were absurd concepts but people put serious time and money into it before realizing that it wouldn’t work. The Stryker was sort of a byproduct of the FCS concept. It’s funny how we always go back to the old tried and true warfighting concepts.

When we initially analyzed the concept, the whole idea was to give the 82nd its heavy cavalry squadron back. HMMWV’s with TOW’s and grunts with Javelins are great, but still only considered a stop-gap. The Sheridans were supposed to be replaced for years, but they just were not. The other point of this thing was to provide a rapidly deployable and scalable capability to other light units. How that would work on an MTOE, I don’t know. Maybe light infantry divisions will receive their own cavalry squadrons from which they’ll parcel out tank platoons or sections. Perhaps events in Ukraine will help lead to a more sober analysis and force mixture, but I’m not counting on it anytime soon.

Anyway, this clearly isn’t an air droppable tank. I’m sure what happened was that the armor community got ahold of the concept and wouldn’t settle on anything less than 35 tons. The Army might have a combined “maneuver center”, but it is still heavily divided by the interests of grunts and tread heads. We know that with the way things go, this thing will grow in requirements and add-on armor packages and it eventually won’t even be air transportable. That’s a shame and it’ll defeat the whole purpose. Nevertheless, I’m still glad the U.S. Army realized that it needed a tank other than the gas burning Abrams.

Or at least I’m assuming that the Army was smart enough to put a diesel engine in this thing. I largely skimmed the article, but I didn’t see anything on the engine. I’d also like to see more on the updated 105 mm canon. I was told years ago by someone involved in the Abrams program that the 105 mm actually had substantially more potential, but we were fixated on matching the Soviets (and Brits) with big guns. I don’t know, but I was also told that 1970’s - 80’s tankers were never confident that their M-68’s would penetrate later generation Soviet tanks with reactive armor. I’m guessing this thing has an M-68A1.

Why not just develop a better missile for the M551?

ALL tanks are air dropable…

I can only deduce that 38tons is the new “light” - the Brit (so far abortive project) Ajax is around the same weight, and that’s meant to be basically a recce vehicle; a far cry from CVR(T) that’s for sure.

Also of course, there’s that old adage (not necessarily always proven I’ll grant you) that if it looks right it is right; this, to me, just doesn’t look right. 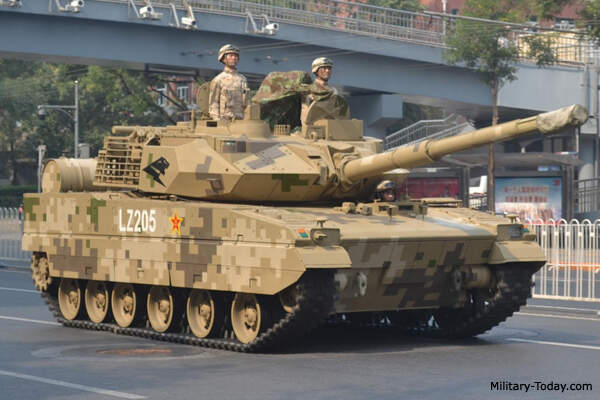 The US hasn’t had a useful light tank since WWII - Sheridan’s notwithstanding. Can any armor or doctrine folks explain why we need one? I mean, we aren’t going to drop them out of aircraft - that never did work well. What else is needed that an Abrams or Stryker can’t do?

The M41 turned out pretty well. In Vietnam it was shown to be quite capable of knocking out Soviet T-54s and their Chinese clones. That was a design that went quite well.

It may be a fan’s Photoshop concept, perhaps not even official, but it might be possible. 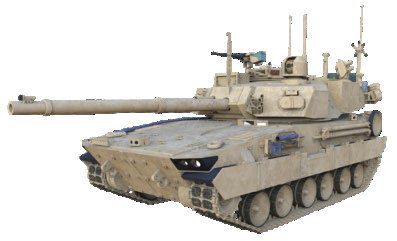 The US hasn’t had a useful light tank since WWII - Sheridan’s notwithstanding. Can any armor or doctrine folks explain why we need one? I mean, we aren’t going to drop them out of aircraft - that never did work well. What else is needed that an Abrams or Stryker can’t do?

And that is exactly why Airborne wants a light tank because the Airborne are confined to HMMWVs (soon JLTVs) with TOW, M2 .50cal, and MK-19s with a few LAV-25s from the USMC. There is no heavy firepower or armor because there are no USA light tanks. FCS was canceled before any 120mm FCS tank was produced.

The Requirement for a USA light tank never went away. It’s just that the Pentagon rarely endorsed it beyond the back burner on the stove. Heavy Mech Armor always gets priority.

The SBCT only have CROWS II, but now they have IM-SHORAD Air Defense and 30mm Dragoon turrets. M1A2SEP Abrams are heavy.

Having a “light” (or medium) tank is all about scalability in a conflict and politicians might not want to commit heavy mechanized forces into “Bush Wars.” In Bosnia, the US Army didn’t want to commit heavy mechanized forces so the US Army went in light with HMMWVs and against Serbian BTRs and BMPs, that is very light indeed. Back then, the M1114 armored HMMWVs and M1117 ASVs where entering service and the US Army couldn’t get them fast enough. A MPF will provide added armor and firepower than Airborne units on the ground lack. Syria called for M2A2s because the SOCOM MRAPs and M-ATVs were again deemed too light—made more noticeable when Russian BTRs bullied SOCOM M-ATVs on the road.

The Stryker MGS was the loser to the tracked M8 AGS and the US Army tested Centauro, Rookiat, and a lot of other light tank contenders a long time ago. The M8 AGS won the competition, but no Army general cared to push to fund and build it outside of the Airborne generals. So politics got in the way and the loser MGS was built and fielded instead because General Shinsheki pushed for Strykers after Bosnia as a Quick Reaction Force that HMMWVs couldn’t suit that well.

Technically, I think reactive armor and TUSK-like kits can be added to the MPF to increase armor protection and weight, but I don’t think that these kits were developed yet. GDLS hasn’t released specifications on the MPF so no one really knows how many rounds or its speed and range.

Maybe the Chinese saved weight on the armor by using drywall?

Not sure but this is the uparmored version.