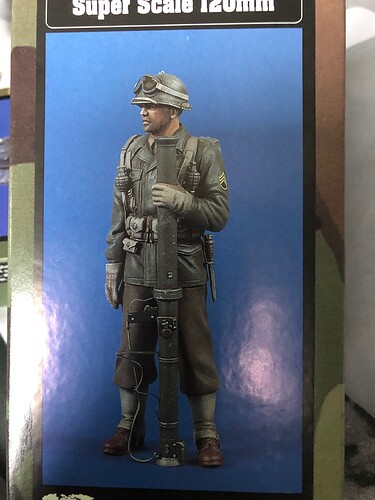 Now, the uniform looks a little bit ‘mix & match’ to me. M43 jacket, wool trousers and leggings? Would this be appropriate? I’ve looked for photos matching it on the interweb but, not come up with this combo. Along with the M9 bazooka, I’m just not sure. US Army ww2 uniforms aren’t my area of expertise so, I thought I’d throw it out to the folks in the know.
G.

My understanding is the M43 jacket and double buckle combat boots were late war issue.
Wool trousers were a mainstay throughout the war for the ETO.
Cotton field trousers (both HBT and sateen similar to the M43 jacket) were issued to be worn over the wool and could have been worn instead of the wool when weather dictated. There had to have been units that had one show up before the other. Also, replacements might find their way to the front wearing gear the regulars had yet to receive.
I can’t comment on the bazooka.

Looks like the M20 “super bazooka” and not the WWII M9 variant, so your figure would be most appropriate for a 1950’s era G.I. - Korean war or other location.

The uniform items look appropriate, though. The M43 field jacket and wool trousers are a common match (even into the late 1970’s, to be honest although the wool trousers would commonly be worn under OD field pants and the field jacket would have been the M65 version with snaps instead of buttons).

However, the webbing is WWII / Korean war / 1950’s Cold War vintage (until replaced by the M1956 ILCE web gear actually only widely issued starting in the early 1960’s), so over all, the figure looks right for just about any winter setting in the 1950’s.

One item you might consider: his boots. The figure is wearing canvas leggings which the Army started replacing with the “double buckle” leather boots in 1943.

So, assuming that my (above) facts are correct:

Thanks for the information gents. So, the jacket & trousers would be WW2 but the bazooka and web gear is Korean era. Only question left is about the leggings. The only reference I can find for them being used in Korea is very early in the war by the Marines. Even then it appears their use was discontinued pretty quickly. Would a conversion to the double-buckle boots be more appropriate for Korea?
G.
Thanks for the info,Steve. You posted just as I was writing

Web gear changed only in color from early WW2 through around 1967 (with the introduction of nylon to replace cotton). The introduction of the M14 and its ammo pouches is another story. The early cotton web gear was light green/khaki. It then transitioned to dark olive #7 later in the war. Late war would show a mix of both possible on the line. These colors would apply to the web leggings as well.

I agree! Plus I have vintage examples of these items in my modest collection.

The wool pants could be a wide range of brown, brown/green, or mustard brown. A lot depends on dye lot , age and dirt.

The M43 started life as OD#7 (dye lot again a factor) but faded with laundering.

I also recommend this link
https://olive-drab.com/od_military_gear.php

Don’t you just love Verlinden! So, apart from the box art being wrong, the uniform, bazooka and the era are all wrong! Now, if I’ve got this right, I can redo the boots to the double buckle type and he should be ok for Korea? Maybe 2ID in 1951? Thanks for all your help lads

Korea also saw the introduction of the M48 russet boots… a direct adaptation of the traditional jump boots. Go with the darker web shade for Korea.