Where the USMC M46s in Korea USNC Green or Army OD? Planning on building a 1st Tank M46 during the Nevada Complex fight. (have a personal connection. The Nevada Korean War Memorial in Carson City is layed out with boulders representing the Outposts, Reno, Carson City, Elko, Vegas The bricks of the walk ways have the names of local Korean vets … my dad and uncle included. 카슨시티, 네바다 - 미국 - Korean War Memorials )

I don’t know but will be following along.

I read somewhere that the M46s were in USMC Green. The M26s that they first took to war were in OD because they were drawn from stateside Army stocks immediately before shipping off to Korea.

According to this article, the 1st Tank Battalion M46s were (re)painted USMC green…

Not saying Chris is wrong, I might be misremembering but as I recall tanks for Korea came from Marine Barstow storage. The specific model 26 or 46 escapes me. I need to reread Ed Gilbert’s book Marine Corps Tank Battles in Korea.

I have heard something similar about Marine tanks but not the specifics, I will reread Ed’s book above and Ken Estes Marine under Armor Korean War chapter to find the answer if I can. The Nevada complex battle was 5/24-5/29 1953 being towards the end of fighting the supply issues should have worked out by then.

Sorry… which green is the marine green?

even in vietnam and in WWII?

The USMC green for Vietnam (and WW2 AFAIK) is the FS 24052 Semi-Gloss USMC Forrest Green. 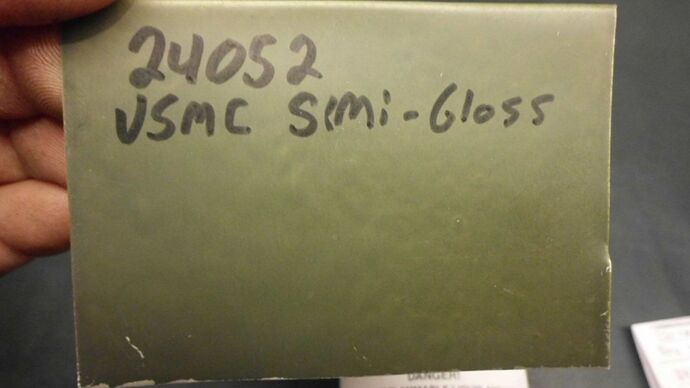 Not saying Chris is wrong, I might be misremembering but as I recall tanks for Korea came from Marine Barstow storage.

Those were the M26s that went over in summer 1950. The M46s were essentially new production in 1951 and hadn’t made it into storage. They were just starting to be fielded by the Army, with production starting in 1949, when the war started.

USMC Green was used from WW2 till the mid 80s when the MERDC schemes came in. From what I remember it was used on stuff built for Uncle Sam’s Misguided Children. Stuff they inherited from Army stock was OD. (suspect the Shermans during WW2 were OD from the factory, to simplify supply) Some M26/46s I’ve seen as reference have Army seriels , and seem to remember reading that USMC got some of their tanks from the Army, hence my question about the color. (too, I heard the Army was scrambling to get M26s into service and pulled some that were Gate Guards/ memorials and rebuilt those.) Photo is an M48A2, 14 ACR, 1962 , in OD. The M48A3, 1st Tank, USMC, 1972, in USMC Green

Thank you for your explanation. tomorrow it’s for me a new world…

The green used by the USMC from the Navy’s Docks and Yards colors was later classified as FS-34079 Forest Green in the FS-595a color guide. In the late 1950’s a darker shade, FS-34052 was introduced (just the earlier color plus black). It didn’t last long, and the USMC reverted to the earlier color in the 1960’s. Military paint in that period was often semi-gloss, so technically, the prefix would be a 2 rather than a 3 (shiny paint was supposedly easier to decontaminate from nuclear, biological, or chemical attack, but officers also loved the shine).

In 1974, Olive Drab was retired, and FS-34079 became the base color of the MERDC cammo schemes used by all ground forces.

Getting back to the question at hand, the Korea M46 Pattons would have been fresh from depot rebuilding (they all started as M26 Pershings) so the question is, did the Marines get their own paint applied at the factory? If not, would they have overpainted brand new Olive Drab just for standardization? Offhand, I don’t know.

“but officers also loved the shine” … Yeah, and bet the Soviet tank gunners did too … the better to aim at you with. I’m kinda leaning towards the Army OD. I noticed on decal sheets seem to have most of the USMC have Army s/ns. The Corp got them as “Lend - Lease” ? Of a related nature, anybody have plans for the “brass basket” on the left side of the turret? Looks easy enough to wing but dimensions would be nice.

Haven’t found an answer on the color, still need to find the other resources I have. According to Gilbert’s book, A Co was supporting 5th Marines and where tank unit used for the Nevada city battles. D co was with 1st Marines. B Co was the reserve. C Co was in the rear. So I recommend marking up a AXX tank.

Interesting the shell cage was added because of the 90mm round shortage. USA wouldn’t issue more rounds unless MC tanks returned enough spent shell casings. The loader would shove the rounds out the pistol port or he left his hatch open that’s how he throw them out. I don’t have any length information but it should be in front of the pistol port to the end the of the turret. For your battle, it was wet and that caused issue firing the rounds as the cardboard stuck to the round so you couldn’t use because it would get stuck in the chamber. In your cage I would add mostly have empty shell and a few live rounds with some cardboard as the round.

I will keep looking for any other relevant information for you.

After a detour from this project I’m back in my search for info for 1st Tank (RIP to the Battalion.) at the Nevada Cities Battles. Time frame I am looking for is the fighting on May 28/29 when the positions were being held by the Turkish Brigade. They (being attached to 25th Inf Div) had relieved 1st and 5th Marines after the March 26-30 dust up.