I completed this build a few years back but it’s never really been posted online. This was the Panda RG and it was pretty rough. The SPARKS is Legend’s and it’s a pretty killer kit in and of itself. I think the DUKE’s and RHINO are Legend products as well

I used some of the Bronco light set as well as DEF model tires. There’s a bit of scratchbuilt details as well and that blue of the glass is not nearly that saturated, the lighting/camera seem to really boost it in the photos. 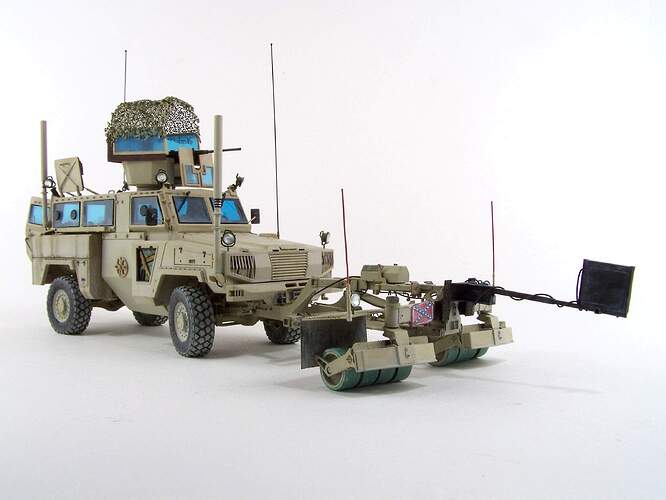 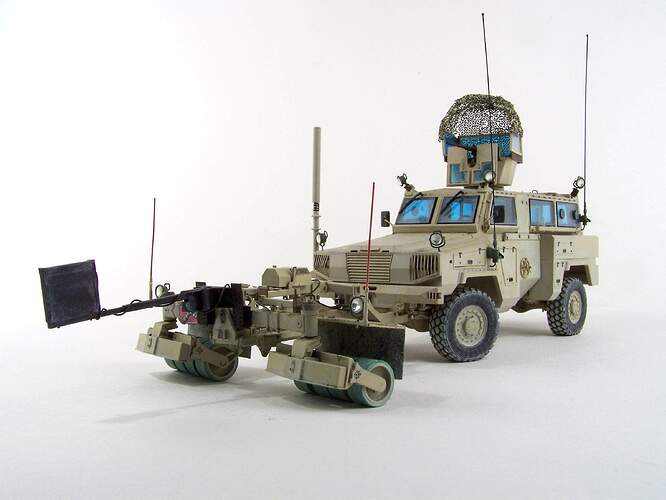 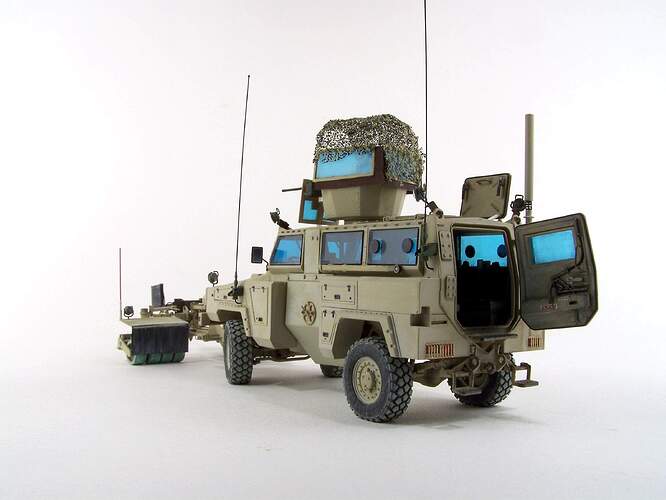 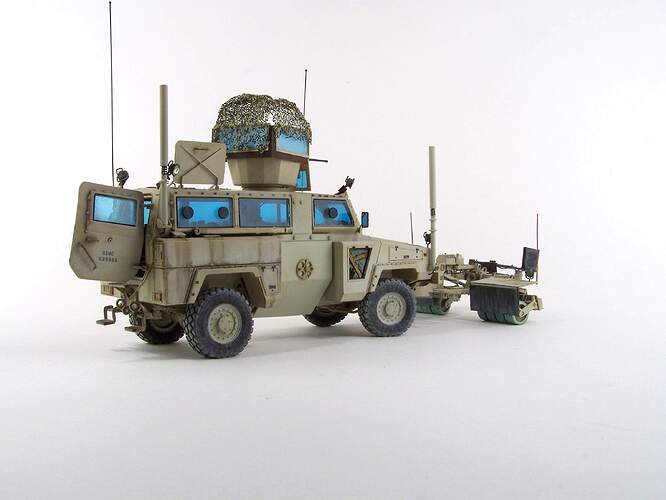 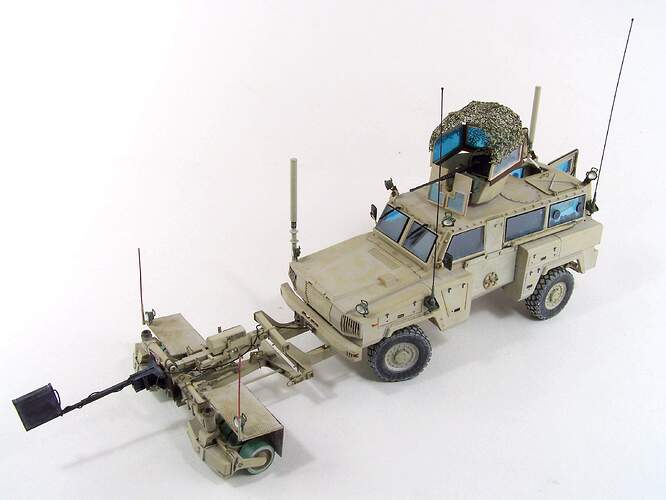 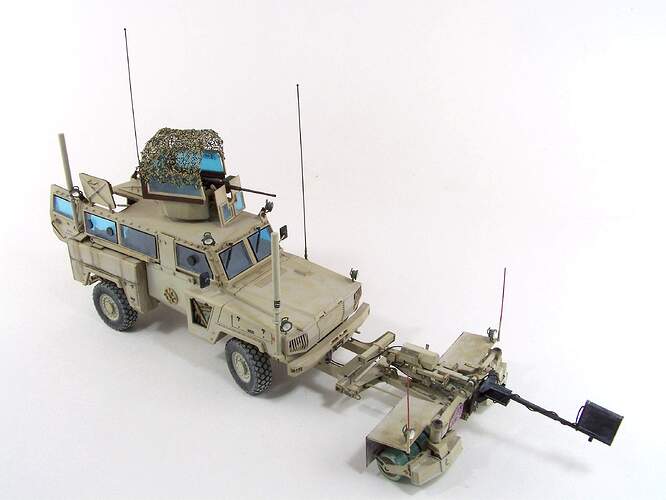 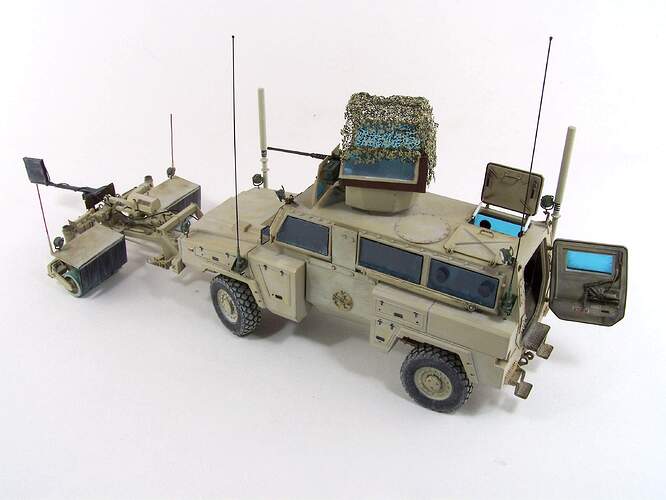 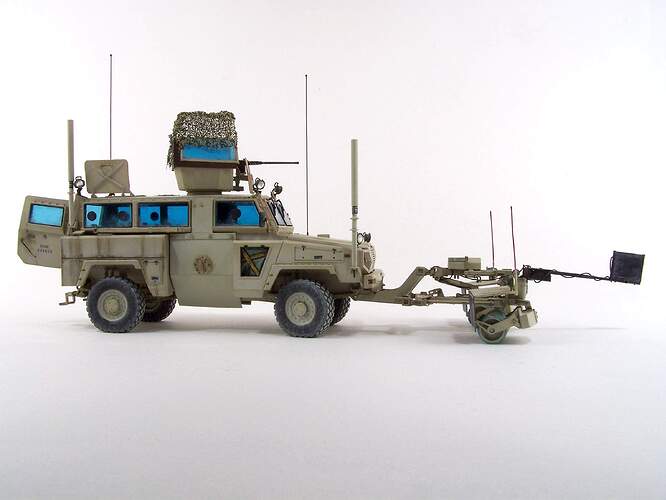 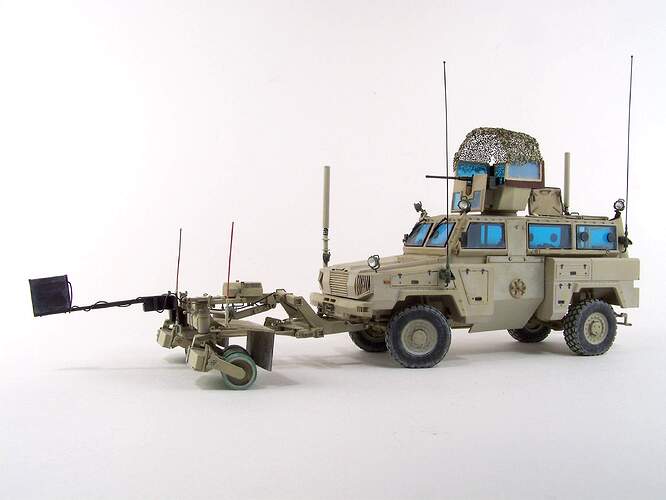 Thanks Matt, appreciate the kind words. I picked up a few things from a few different vehicles and put them all into one. I’m pretty sure the missing fender stowage door with wood pieces holding stuff in can be found in the internet (or I got it from a book?) The license plate was something I saw on a Cougar or MATV somewhere and thought a little splash of color would be nice.

love those vehicles, really nice and clean build.
Not to much chipping and weathering, just enough to make it realistic.

Beautiful work all around. I love everything about this. Do you an online build? I do not have this kit and I want to get one. However, like your comment “it was pretty rough” keeps me away. Biggest disadvantage for us modelers is that it’s the only kit manufacturer that has this kit.

So, can share precisely how rough it was during your build? Thanks!

Ps: that camo net, did you make that?

@Stryker45 Thanks for your comments Mike.

Unfortunately I don’t have an online build of this model, I did publish an 8 page article back in March of 2017 in a UK magazine but it might be pretty hard to come by now. Pretty sure the back issue is sold out on their website so maybe ebay or a modeler friend may have a copy of this, the Marines Special Issue. 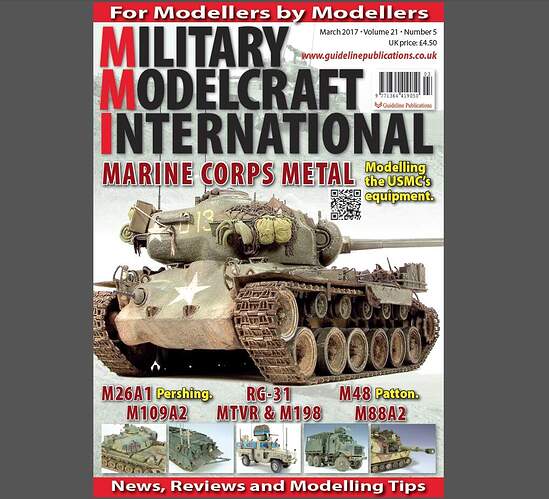 As for what I remember about the kit and what made it rough is of course, subjective. Some of the stuff I felt I had to deal with may not be something another modeler would even care about. For me, I was trying to make it as accurate and detailed as I could but that’s not to say you couldn’t build it out of the box for fun. It just depend how far you wanna take it. 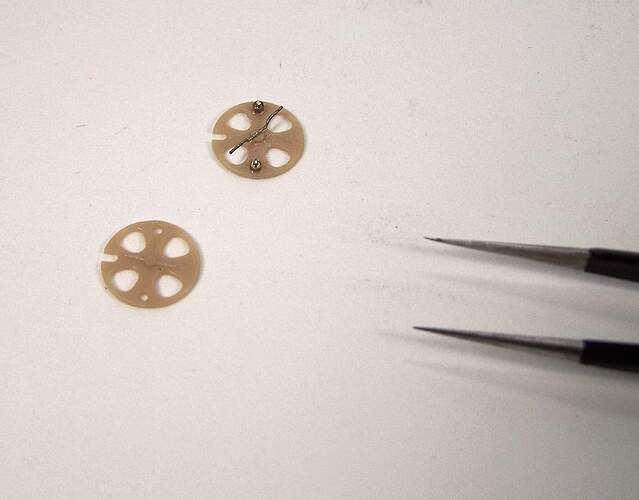 I can definitely remember things like locator pins and their respective holes not matching up. I remember having to deal with fit/shape issues of lots of parts. For a modern kit there were a lot of sink marks all over the place that you can see below filled with putty. This was a common theme on a lot of parts but not beyond most modelers skill set. It’s just something I’d expect from and old kit and not something so recent. 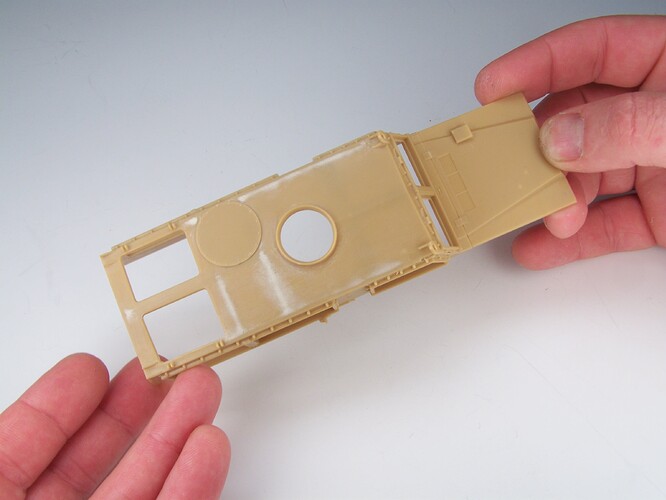 I also replaced all the window ‘glass’ as it was wavy and not very flat at all, especially around the gun ports where it had sunk. That was one of the hardest parts to deal with for me and it still didn’t come out perfect. Some of these issues may not be something you care about so you may not find the kit as bad as I did, and like you said this is the only game in town so if you want to build and RG, you don’t have any other choice.

As for the Barracuda net, it’s a photo etch product by Eduard, they come pre painted in a couple different colors. I just cut a smaller piece to size and twisted and bent it around to give all the little shapes some volume, then shaped it to fit. 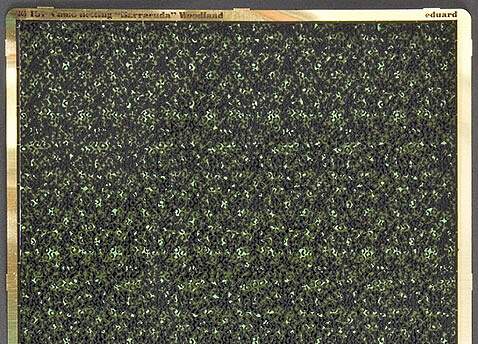 As for the Bronco LED light sets that you initially asked about in another thread, they are awesome but oh so fidgety. Tiny, super detailed fragile parts make up the parts for the lights and assembly is tricky. I ruined at least four to get the six good ones you see on the model.
I hope that helps with some of your questions at least a little and please, feel free to ask me again if I’ve missed something or didn’t clarify it well enough.

Hello Ken, thank you so much for your detailed respond. You have given me a lot to chew on. I know for sure earlier releases by Panda are notorious for fit issues. I have their M-ATV kit that I never got around to finishing it but I will be replacing it with new RFM M-ATV w/ full interior.

I read your comments about bronco lights set in the other thread so I ordered one of each style they issued from eBay and will use them in near future on various vehicles. Did you wire them by any chance? I cannot tell as I’m seeing your photos of RG on my iPhone.

Also, thank you for the information on the magazine. I will try to find a copy on eBay or post here in the for sale/want section. From the cover shot you shared it looks like a really good magazine to have. It cover several vehicles that I want to model as well. So, a must have. I’m an old school guy as I much rather have a book or magazine as a reference guide.

Well, thank you for all your help. I look forward to your next cool subject out of the Armorfarm.

Did you wire them by any chance?

No unfortunately I didn’t.

I wanted to and I should have, but by the time I was putting them on I was getting pretty spent on this project. I was simultaneously building the Pershing and both projects were fairly involved and I was just ready to be finished with both.