I’d already had Valkyrie’s Modern US Army Tank Crew in Europe, 1970s Era, #3535017, for a project involving an M551 in 1970s Europe. Wanting a few more figures the scene I’ve envisioned, I noticed (after a lot of flipping back and forth between webpages) that the Modern US Army Tank Crew 1980-90 Era, #35027, were remarkably similar. Hopefully you’ll find these photos helpful in picking your crew.

Both sets include a driver bust, a commander and a loader. All are depicted wearing field jackets with chest rig holsters.

As you’ll see, the driver’s busts are identical. The commander and loader figures are slight resculptings with different arms. As for the other details, I’ll admit I’m not an expert on this stuff so I’ll let the pictures do the talking. 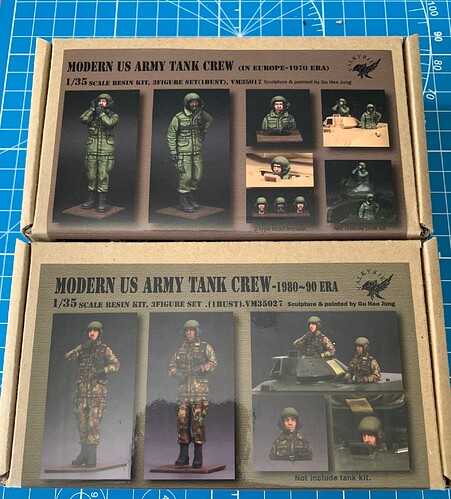 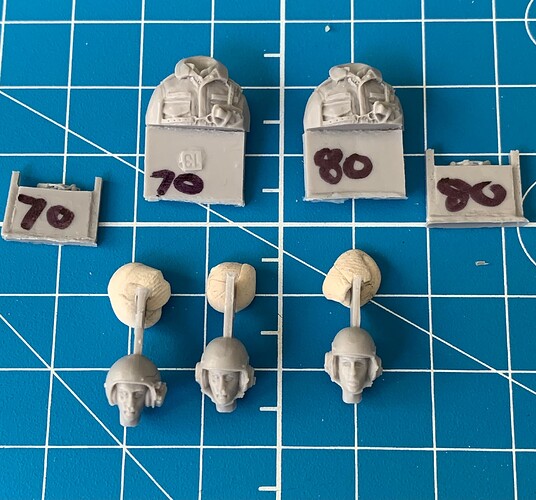 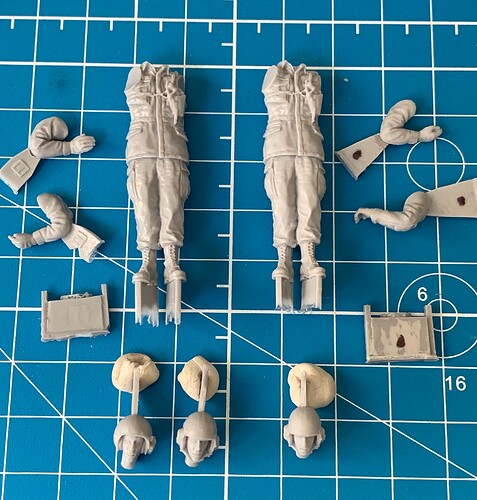 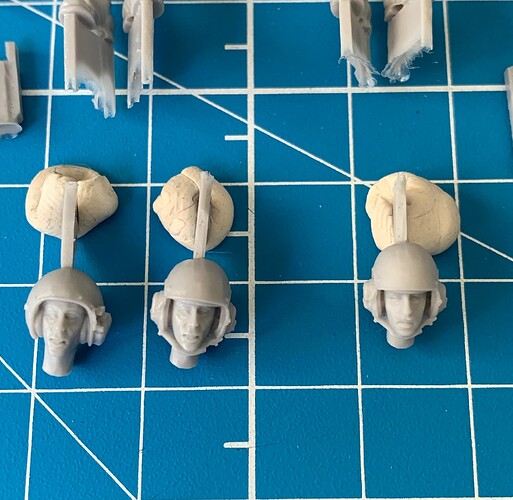 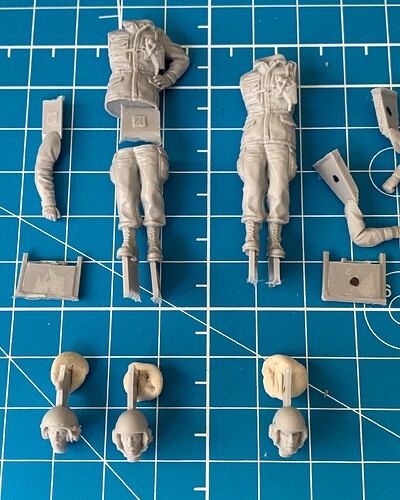 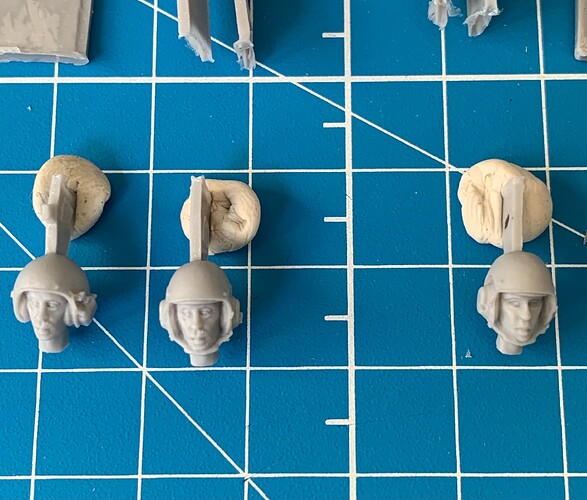 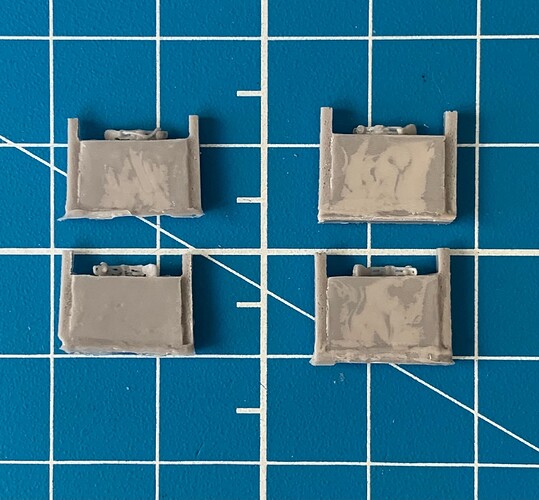 Since I planned on depicting one or two figures with a helmet here is a comparison with a Verlinden head on the left and, I believe, an ADV/Azimut head on the body: 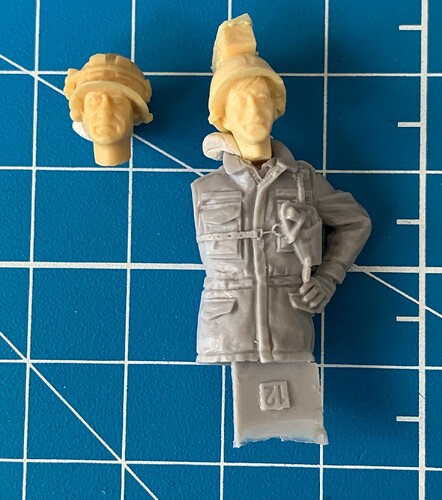 Very nice. Yup, they look like the same basic bodies w/new arms. Either would be usable for '70-'90s figures.

Thanks for checking in Gino. I’m thinking of adding this guy to the mix as well… 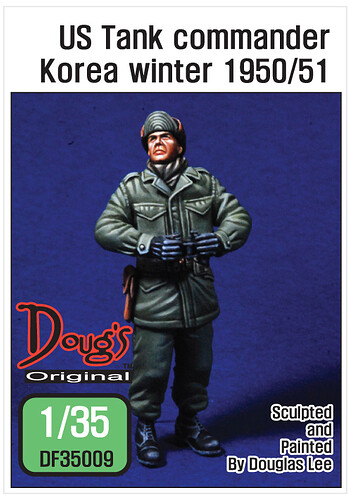 He looks good too. If you update his head/headgear, he should fit right in.

This last fella would also be correct for any of the Cold War early REFORGER exercise, Exercise BIG LIFT, etc.

Looks like the 70’s set is a better deal.

@Sherb i noticed this when i got my 1970s set as well. Looks like there isn’t to much of a difference. Are you doing a diorama for Europe in the early 80s? My dad was a tanker over there in mid 80s and has pics of him in just the Green Uniform. Never saw a camo one before. I’m thinking of getting another set to put in a 113. If you do a build of them anytime soon I’d love to see how you paint them.

My dad was a tanker over there in mid 80s and has pics of him in just the Green Uniform. Never saw a camo one before.

It depended on when he was there and when he was issued BDUs. The Woodland Camo BDUs were first fielded in the early '80s. The 82d Airborne was the first unit to be fully fielded with them, Kevlar helmets, and PASGT vest just before the Grenada Invasion (Operation Urgent Fury) in Oct '83. The OG 107 green uniform was authorized for wear until it reached its wear-out date in the mid to late '80s. After that, the BDU was the only authorized fatigue uniform.

The BDU became available for purchase in 1981, although they could be hard to find, in certain sizes. We were required to have one set by Oct. 1981, IIRC. They were very expensive for the time, about $40.00 for the pants, which was more than the entire set of fatigues (shirt, pants, and cap).
The BDU M65 field jacket and some other items, like the summer BDUs, did not come out until later.

Love the fact that someone is making figures for the US Army in Europe from the 1970s. My question/issue is: What percentage of US Army Soldiers in Europe in the 1970s were tank crew members, compared to those who did other things???

The OG 107 green uniform was authorized for wear until it reached its wear-out date in mid 1989.

I thought that the wear out date on the OG-107 “pickle suit” perma press fatigues was earlier, perhaps ‘85 or so. I don’t remember seeing anybody wearing them after that summer. The OG-107 jungle fatigues were around longer.

What percentage of US Army Soldiers in Europe in the 1970s were tank crew members, compared to those who did other things???

The US Army has a higher “tooth to tail” ratio of support troops to combat arms troops than most armies, approx 7 or 8 to 1. Then when you factor in tankers as opposed to the other combat arms MOS’s of infantry, artillery, cavalry, & engineers, the ratio of tankers is even smaller. Mind you that US Army Europe was tank heavy/Mech heavy army compared to other area commands in the 70’s, so the ratio was different there than elsewhere, such as Korea or Stateside. But tankers would be overall a small percentage of troops in Europe in the big picture.
According to Wiki, in 1970 there were 265,000 US solidiers in Europe, and by the 1980’s that had increased to 350,000 at peak strength.

I thought that the wear out date on the OG-107 “pickle suit” perma press fatigues was earlier, perhaps ‘85 or so. I don’t remember seeing anybody wearing them after that summer. The OG-107 jungle fatigues were around longer.

That could be the OG 107 Jungle Fatigues wear-out date as opposed to the “pickle suit”. It was somewhere in the mid-late '80s. Initial post updated.

Carlos, exactly correct! While I’m sure that for most modelers of that period, building the M60 is the major subject, there are a lot of options for the M-113/M-106/M-577, not to mention the M-109, and then the M-151, M-561, M-35, and M-54, just to mention a few vehicles other than tanks. All of these vehicles had “crew” members, who were NOT wearing tankers uniforms and tanker helmets. And had both summer and winter uniforms, because they spent a lot of time in the field year round.

Plenty of opportunities for adding figures to these kits which seem to be going begging.

Yeah, there is a huge gap of crew figures for all the USAREUR stuff besides M60s and the TCs and drivers of accompanying AFVs. One could modify the few Miniart and Dragon figures that are close enough for the era. But yes, we need more pickle suits/steel pots US Army Europe Cold Warriors in summer and winter gear.

I second that motion!
Ken

Let’s see, I went to Army BT in October 1984 and we were all issued BDU’s - a few DI’s still had fatigues. Same when I was in AIT until mid 1985. I vaguely remember a few folks wearing the pickle suit when I got to Germany in 1985 but that uniform was totally gone by the time I left in 1987. I always had MRE’s (cue all the folks complaining about how C’s were better) because Gen 1 was issued about the time I joined. We also had steel pots in BT but had swapped out to Gen 1 Kevlars in early 1985.

Yes I went to BT in ‘85 at Benning and there was a few Drill Sgts still in the green uniforms; same here with steel pots in Basic and Kevlars in Germany. Only saw BDUs once I got to Germany.

I agree with that.