i was just wondering how to remove vallejo pigments after they have been attached using the wet method and using the pigment binder as i seem to have over done it a little.
all help welcome.

I’m not sure what the Vallejo binder is made from but since Vallejo mostly deal with acrylic products you could try a stiff paint brush and water and see if it shifts anything. A dry stiff brush may also work- even a toothbrush if the parts or area of the model are not too delicate. A cotton bud might also be worth a try. Failing that maybe try rubbing it with your fingers- some dry pigments can be knocked down a little in this manner.

Most pigment fixers are merely thinned down flat varnish.

I’m not quite sure you’re gonna be able to remove them without damaging the surface once they’ve cured.

What’s the paint and primer underneath the pigments?

If it’s one of those very fragile paints like Vallejo acrylic, I think there is a very high risk of damaging the finish underneath the pigments.

I’m not really up to speed on all the pigments. l grind pastel chalks on sand paper and use. Two things that help in the past with toning down:

Wish you the best on recovery from the setback.

@Klaus-Adler, I would try some binder on a scrap piece of plastic. It is an acylic product so it maybe similar in composition to Future Floor Wax or similar brand names. Ammonia would possibly work on it as it has been used as a floor stripper. At least you wouldn’t ruin your model trying it on the scrap plastic.

Hi guys, thanks for all the input.

i have been at it with a short stiff bristled brush and warm water and that seems to have shifted a lot of it, i will probably go over it again one more time and see how i get on.

usually i just brush the powder on and don’t bother with any fixer agents, this was the first time and it didn’t go so well… i need to work on this and do some research and see how to do it better next time.

@Armorfarm thankfully i use tamiya acrylics but i sealed the kit with their rattle can flat matt clear varnish, which seems to have saved the paint underneath.

@Armor_Buff i grind pastels on sand paper too but i thought i would try something different, that will teach me. how do you stop your pastel dust/powder from coming off? everytime i have sprayed a sealing clear matt varnish over them they seem to disappear.

Basically a work around.

I apply pastels as last step after the matt varnish etc with the model mounted on a base. The base provides a convenient way to move the model without touching it so the pastels remain in place.

If the model had to be transported to a,club meeting or show, I have a covered transport box. Learned the hard way a few rain drops can make a mess out of a model.

@Armor_Buff Wade it’s good to hear that you don’t seal it, all the model magazines always talk about sealing in the powder effects but that has never work for me… i thought i was doing it it all wrong but i guess i’m not the only one then

We are definitely On the same page Klaus!

My opinion seal will kill at least 50% maybe 90% of pastel effects. That was my experiences sealing long ago.

I have found the same results. I seal first and then apply the pastels.

Just a note that ground up “chalk” pastels have a binding agent already mixed in - gum Arabic (along with, perhaps you guessed it - chalk). They are not the same as dry artist pigments (which are the same thing as the various “weathering powders” or pigments). Gum Arabic is a binder that dissolves into solution with alcohols and when dry has its own adhesive quality (which hold the chalk pastel pigments to the surface).

Dry artist pigments are exactly that - pigment with no other agents or material. In fact, if you mix “weathering powders” or pigments with any clear acrylic paint (matt, gloss or semi-gloss) or gloss or clear acrylic mediums you will make an acrylic paint or paste. Mix them with linseed or other artist oil medium and you will make an oil paint. The same goes for mixing them with alcohol and gum Arabic and packing them into waxed paper tubes. The result is a pigment stick (with or without chalk to create the “pastel” effect) with gum Arabic binders already mixed in.

Also be aware that oil pastels are pigments mixed with a very(!) slow drying oil medium. Think of them as “crumbly” oil paints in how they can be worked. (Yes, you can “thin” them with mineral spirits and then paint or streak them just like artist oil paints.)

Dry pigments that are fixed with anything take on the characteristics of a paint made with that same medium. So, use an acrylic fixer and the effect is like thick, dried acrylic paint. Use mineral spirits or alcohol as a “fixer,” though and the effect is none permanent since you have not used any binder in the solution. However, if you “fix” dry pigments with a clear enamel or lacquer paint, the effect will be like a dried enamel or lacquer paint.

For a temporary fixer, try Tamiya X-22A thinner. Once dry, the pigments can be brushed away OR fixed permanently using a clear acrylic, enamel or lacquer (or even thinned PVA glue). I generally use an airbrush to lightly spray Testors Dull Coat over pigments temporarily fixed with X-22A an follow that with a heavier soaking with some other permanent fixer. This is a useful technique on tracks where I want the pigments down in the areas between the spuds or in the hinge areas. Once temporarily fixed in place, the excess on the spuds or cleats can be brushed away and then the rest fixed permanently.

it’s good to hear that you don’t seal it, all the model magazines always talk about sealing in the powder effects but that has never work for me…

I’d switch magazines Klaus, I’ve written countless articles for books and magazines over the years and I don’t seal anything.

Yup. In my “Finishing And Weathering Sequence” Step 13 is “Mount to base so no one touches the pigments.” That’s the final step. Done.

What’s your thoughts on using cigarette lighter fluid/naptha with pastels & pigments as fixer or carrier?

So these would have Gum Arabic to help stick to the surface? 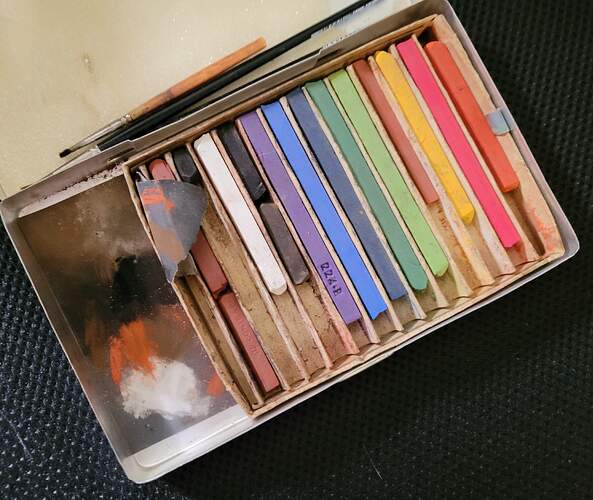 Naphtha as a temporary fixer would be pretty much the same as using mineral spirits, I suppose. Once the carrier evaporates, the pigments are no longer sitting loose on the surface, but they’re also not “fixed” as if a solution with a binder had been used. I can’t see any reason why naphtha shouldn’t work, though.

Having said that, I must admit that I’ve never tried naphtha or cigarette lighter fluid as a pigment fixer. At one time back in the '70s I did use cigarette lighter fluid as a thinner for hobby enamels. Since then, though, I’ve switched to other thinners formulated specifically for the paints. As mentioned above, my “go to” method right now for a temporary fixer is Tamiya X-22A followed by Testors Dull Coat once the X-22A has dried out.

If the pigment covered area won’t be handled very much, the Dull Coat can work as the final fixer. Using just the X-22A will leave the pigments subject to being disturbed at the slightest touch. So much with fixing or not depends on what you’re trying to do and the desired final effects. Heavy, 3D earth textures are very different than light dustings or streaking. Whether or not you’re laying one color over another over another also has an impact on how the pigments are fixed.

Earth textures packed into areas surrounded by other areas where the heavy earth textures have been rubbed away or fallen off are different than other accumulations.

A “rule of thumb” is that if you powder the sticks on something like sandpaper and the resulting pile is loose and dry like flour, then they’re likely “chalk” pastels made with gum Arabic.

However, if you powder them and the particles clump together like microscopic damp sawdust, then they’re likely to be oil pastels.

Be aware that “colored chalk” is NOT the same as either “chalk pastels” or “oil pastels.” Colored chalk is, of course, pigmented, but it is almost entirely chalk with a very low pigment content.

“Chalk pastels,” on the other hand have some small amount of chalk added to them to both lighten the color (reducing the color saturation to create the “pastel” colored effect) and to harden them up slightly. The chalk also serves as a filler to make the “chalk pastels” less expensive. Ironically, the higher the quality and more expensive the “chalks” are, the less actual chalk has been added. Really good chalk pastels are actually very soft.

I am old school like Wade shaving my own powder. I have found that once the flat coat is applied one can apply the ground chalk pastels without a fixer. The matt finish holds the pigments remarkably well so long as there is not excessive handling. And as Wade has correctly observed much of the effect of the pastels is lost if over sprayed with a “fixer.”

I do know that if you get Mig pigments on your fingers you can transfer them to places you don’t want them!

Maybe someone could clarify this for me. I grind !y

My own and thought I read somewhere that a few drops of liquid dish soap like dawn heavily diluted w distilled water makes an easy DIY fixer for pigments. Anyone hear of this also?

I’ve used ordinary water as a temporary fixer, misted on with a plant mister. My beef at the time was how long it takes to dry out. Too much also turns the pigments into a slimy mess. You can sprinkle more pigments on top of the first layer to build them up.

However, with a light touch, wetting the surface and then sprinkling on the pigments (using a recycled spice shaker bottle) did work. When dried, though, there’s no real adhesive quality.

I now use Tamiya X-20A in the same way. It’s main advantage is how quickly it dries. Still no real adhesive quality, but that’s what “temporary” means.

I am totally amazed with using Super Clean as a stripping agent.it’s available at amazon and wal mart.had a total of five coats of tamiya paint,and Pledge (future).soaked overnight and all that was needed was a rinse,no scrubbing or brushing.